This archeological site of the Magdalenian era is found in the vicinity of Gernika-Lumo. If you go to Santimamiñe you have to see Oma Forest, an astonishing group of trees painted by the artist and civic activist Agustín Ibarrola.

Plan your visit to the Oma Forest

The complete tour can be done in a morning if you book the 1:00 pass at the visitor center of Santimamiñe Cave and arrive at least two hours beforehand to do the long walk through Oma Forest, which faces the cave. However, it’s better to plan to go to one place in the morning and the other in the afternoon. The very interesting nearby places where you can go for a weekend getaway are the wonderful coastal towns of Ea and Elantxobe, the nature reserve of Urdaibai, and the historic town of Gernika, which you will have probably passed through to get to this destination.

History of the Oma Forest

Santimamiñe Cave is located in an incomparable natural setting on the right shore of the basin of Urdaibai Reserve in the town of Kortezubi across from Oma Forest, a work by the Basque artist Agustín Ibarrola. The cave was discovered in 1916 thanks to the curiosity of some kids who were exploring the nearby land in the town of Kortezubi-Cortézubi. After pulling some stalagmites out of the ground, they were able to see that the stalagmites had been covering the entrance to a passage which they crawled through, eventually stumbling upon an underground room that contained several cave paintings. After telling a teacher at their school about their discovery, the information about the recently-discovered cave reached the government of Biscay, which immediately took control of the site. 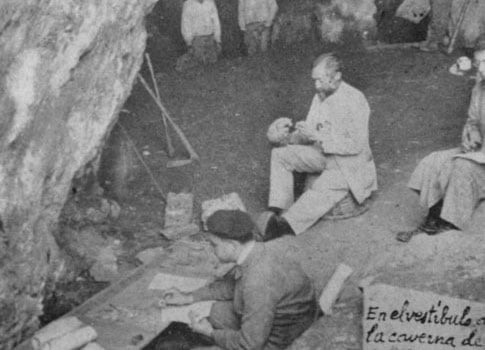 From left to right: Aranzadi, Eguren, and Barandiaran during an excavation

Most of the cave, which penetrates the center of the impressive Ereñozar Hill, dates back to the Magdalenian era of the Late Stone Age (13000 B.C.) and constitutes one of the most important collections of cave paintings in the region. It encompasses 365 meters of underground passages that contain varied depictions of animals totaling 50 figures, including bison, horses, caprines, deer, and bears. Furthermore, the cave is covered in stalactites and stalagmites of great geological and aesthetic value. Geographically, it is part of the group of sites in Atlantic Europe, which includes an expanse of land between Portugal and Scandinavia.
Between 1982 and 1985, the sculptor and painter Agustín Ibarrola—who lived in the area—painted some 500 pine trees on the hillside facing the cave with brightly-colored stripes, circles, and figures. The result is a lively forest. In 1986, the owner of one section of trees chopped them down in response to the pacifist affiliations of the artist; shortly afterwards, the government of Biscay purchased the land to protect the work. In 2000 and 2003, the trees were vandalized in the form of axe attacks and paint thrown with buckets to cover up the artist’s designs, accompanied by paintings on the entrance with the message “Ibarrola Spanish. ETA, kill him.” This was due to the artist’s affiliation with the pacifist movement Basta Ya.

What to see in the Oma Forest

Santimamiñe consists of four distinct sections. From the main entrance of the cave, you access the Main Room, where the first paintings appear. In the next room, also known as the Deep Zone, we find depictions of bison and horses, the likes of which can be seen in the Anteroom, although the depictions there are more deteriorated than elsewhere. Finally, the most notable collection of figures is found in the Main Chamber, an ample space that is four meters long by three meters wide in which we can view varied collections of figures. All the paintings in the cave were done with carbon and, obviously, are black.

For reasons of security and conservation, the cave was closed in 2006 and reopened two years later, although without public access to the Main Chamber and part of the interior tour, which stayed open only for investigations. In the nearby shrine of San Mamés, a visitor center and virtual visit to the cave have been constructed, where the original contents have been reproduced stone by stone. 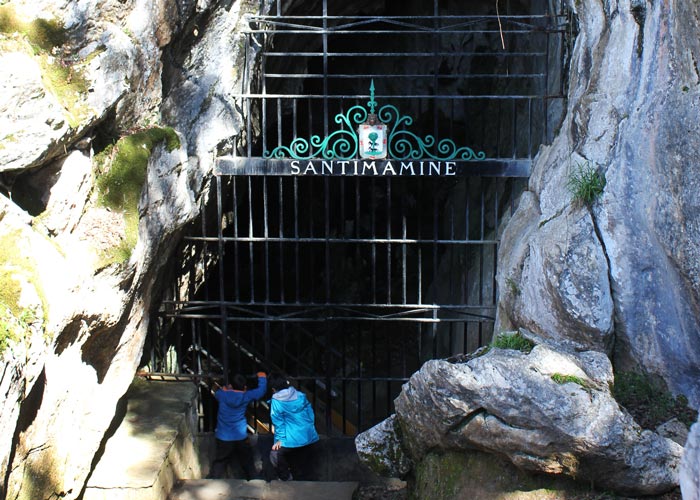 Entrance to the cave

At the entrance of the cave there is a site where remains dated from the Magdalenian era to the Roman age have been recovered.

In 2008, Santimamiñe Cave was included on UNESCO’s World Heritage Sites list in the category of Paleolithic Cave Art of Northern Spain, which included other Cantabrian caves such as Tito Bustillo and Candamo in Asturias, Montecastillo, Covalanas and La Garma in Cantabria, and Ekain in Basque Country.

There is also much to see in Oma Forest or the Animated Forest, an extraordinary group of trees painted with brightly-colored stripes, circles, and other shapes by the great artist and civic activist Agustín Ibarrola. The forest is entered through the parking lot of Santimamiñe, as it is found on the hillside directly facing the cave. You must walk up a trail through the forest and continue following the signs until arriving at a certain height at which the descent begins down a path where you begin to see the first trees. The paintings are done in different directions, and on the ground nearby there are some markers from which we recommend viewing the trees to enjoy a better perspective. At your own will, you can go from one area to another while descending once again to the parking lot. We recommend going on a sunny day and dedicating a couple hours to the visit so that you can be relaxed and take in the environment created by this original work of art.