The castles of Ludwig II of Bavaria, the Mad King, were made to look like they were taken from a fantasy story. The monarch lived halfway between fiction and reality. Because of this he left behind prints like those of Linderhof Palace. Places given to narrative, landscapes chosen by novelists like John Le Carre who are associated with Germany. However, there is a very similar space much closer. It is in Bizkaia and has the same fairytale feel. It is the castle of Butrón, which in the 19th century went from being a medieval fortress to the stylistic amalgamation that it is today. 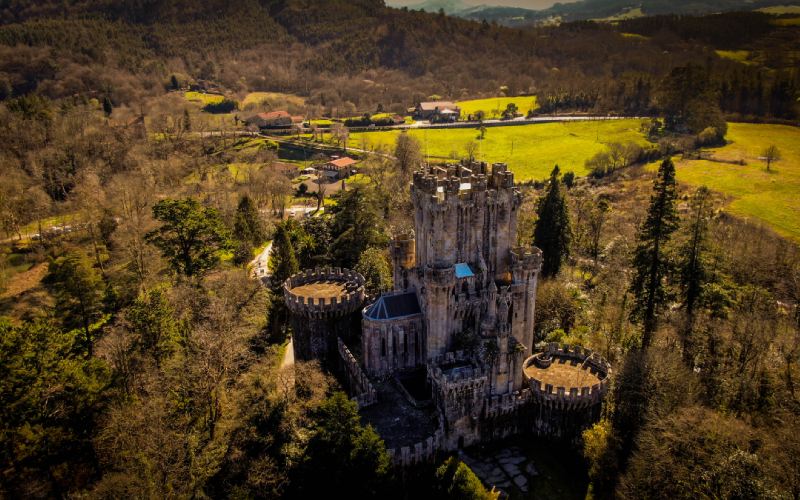 The bloody past of Butrón Castle

The origin of the tower-house that gave rise to Butrón Castle is somewhat confusing. Associated with the family and the river that gives it its name, tradition places the original construction in the 8th century. It would have been a knight, Captain Gamíniz, who built it. However, this type of building actually emerged around the 14th century. Since the Butron dynasty emerged at the beginning of the 13th century, there was probably a Butrón residence there before that.

Descendants of the Haro, lords of Bizkaia, and over time half of the European royal houses, were very active in the Bandos Wars. These conflicts devastated the Basque provinces from the 13th to the 15th century. There were two sides, the Oñacinos and the Gamboínos. The Butrón chose the former. The atmosphere was unbearable throughout the region during those years.

Nobles of one side fought under almost any pretext with the other. In the middle was the people, who were often massacred for being in the wrong place. Fortunately, most of the time the outbursts were limited to brawls rather than battles. A context that reminds us of the wars of the mafia and with which each side tried to take over the economic and social domination of the Basque Country.

All of this ended up being the seed of the Brotherhoods, which in turn were the nucleus of the Provincial Councils. These entities made it possible for the nobles to do something about it. However, from tower houses like those of Butrón, the banderizos had their position secured. In this case, it was a powerful building with thick walls. It had a complex of forges that were among the most important in Bizkaia. Finally, after the Castilian intervention in the mid-15th century to put an end to the increasingly uncontrolled warfare, the space was reconverted into a manor house. 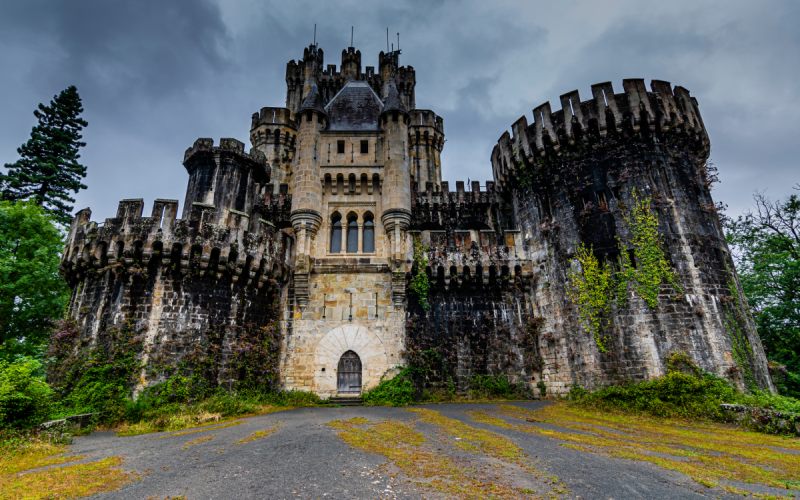 From tower-house to romantic castle

For centuries, the Butrons were integrated, and finally diluted, into the Castilian aristocratic system. They were an important family and had a presence until the 18th century. Plentzia was their main focus of power. It should also be noted that its name most probably comes from some fishing gear reflected on its coat of arms. 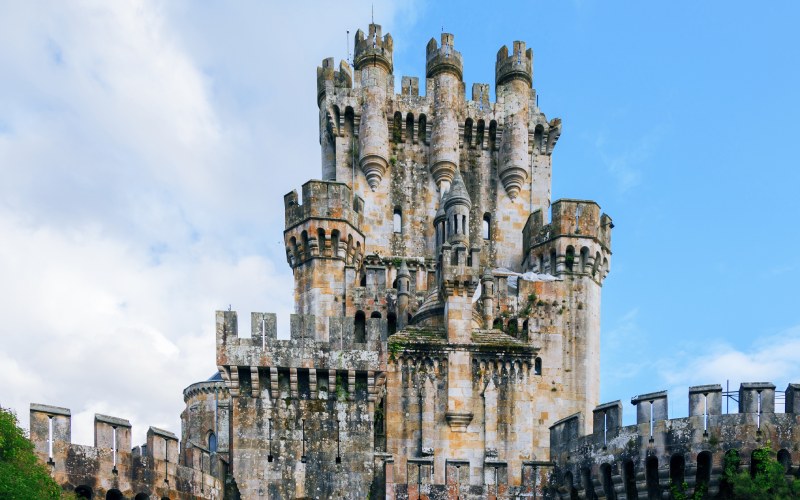 By the middle of the 19th century the medieval fortress was in the hands of the 7th Marquis de la Torrecilla. It was him, Narciso de Salabert y Pinedo, who decided to give a new life to the then ruined complex. To do so, he pulled out the money that his Biscayan possessions gave him. Also from one of the most renowned architects of his time, Francisco de Cubas. Although he was known for being the mayor of Madrid and for the Almudena Cathedral, his was the design of Butrón Castle. 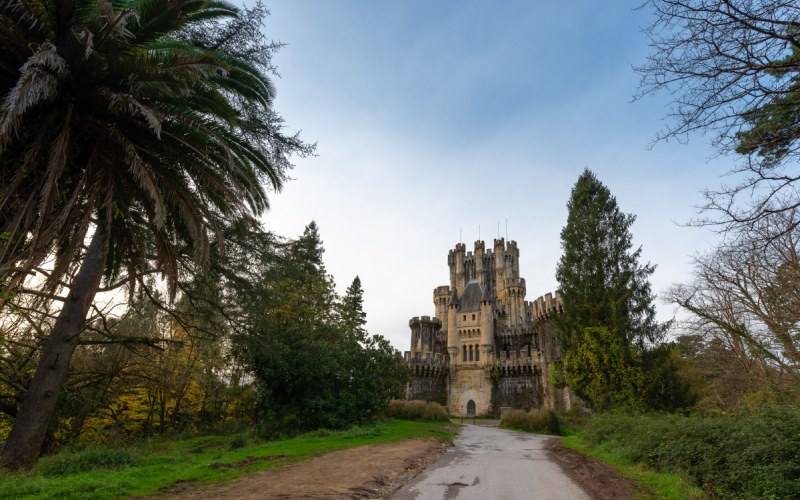 Although medieval elements were exploited, the whole planned by the Marquis of Cubas was radically different from what it was. The neo-Gothic style was predominant, very overloaded, to which was added an amalgamation inspired by the center and north of Europe to Spanish cities like Segovia with its Alcazar. Little by little, the strange building took shape.

Four powerful bastions mark the floor plan, at each corner. Round and strong, they contrast sharply with the keep and the front facade. More elaborate, full of spikes and openings, they give a fairytale appearance. It seems that the watchtowers are piled up. Another sign of identity is that the spaces are often connected in a way that is more aesthetic than effective, for example through exterior passages. So it is clear that the intention of the palace was to be attractive, not comfortable. 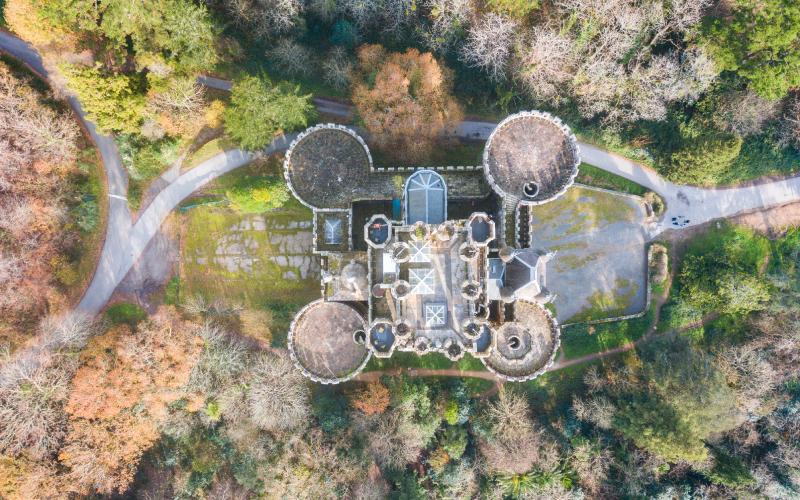 The abandonment of Butrón Castle

The predominance of the shape made the habitability of the building somewhat complicated. It served as a residence, but was not as comfortable as a more normal one. For example, the walls of around four meters of some towers left small rooms that were difficult to access. Its undoubted attractiveness made it a place to be seen, but it did not have a definitive owner.

It passed through different hands during the 20th century, until it ended up in the hands of a business conglomerate. Currently part of the municipality of Gatika, they have been trying to sell it for years without success. It was even auctioned off. Valued at several million euros and declared a protected heritage, its last active mission was to serve as a place for meetings and celebrations until shortly after the turn of the millennium. 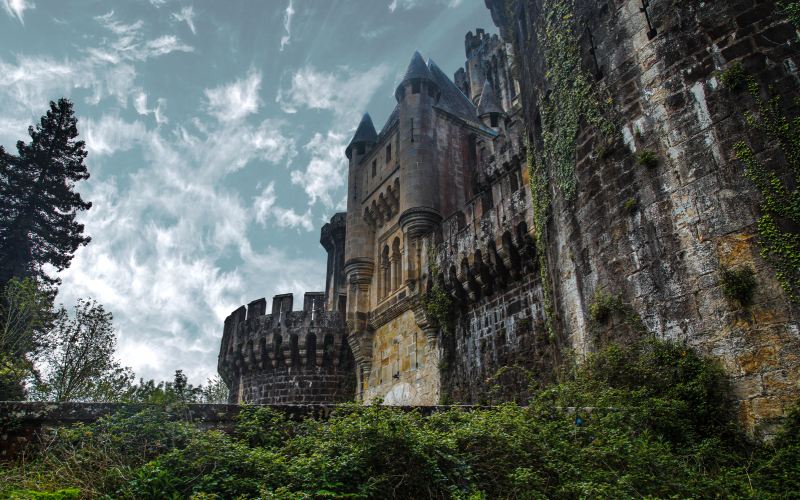 Since then it has remained abandoned. The black of the bastions is a good example of this, since the stone in which they are made is white. The enormous garden surrounding it, where palm trees grew, is not well cared for either.

However, the deep green of the surroundings reinforces the fantastic postcard of Butrón Castle. Therefore, despite not being able to see inside, it does not stop receiving visits from tourists. Its location favours this, as the A-8 allows easy access to the local roads leading to the site. Likewise, it is right between Bilbao capital and Bermeo. This means that San Juan de Gaztelugatxe is also close by. 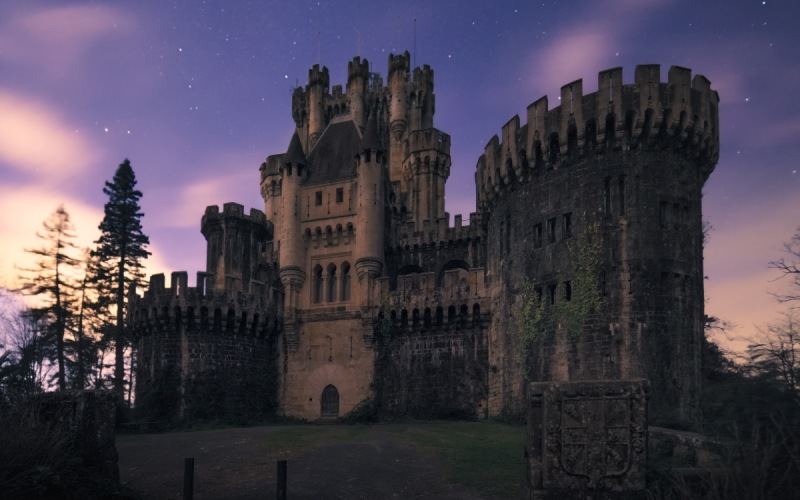 The exit to the Cantabrian Sea is provided by the above-mentioned seafaring Plentzia. You can take a circular route between the two points, which is about 14 kilometres long and not very difficult. A way of admiring the environment between sea and mountains that characterizes the Basque coast. It is also worth taking a walk between the castle and Gatika, a small inland town with great charm.