The Arteaga Castle rises beautifully, enclosed in a landscape of great beauty. At first glance, it is easy to imagine it as the protagonist of a dream world, a kind of temporal transition. Perhaps, as part of the set of a period film, about to enter the scene princesses, knights, and even a witch. But up close, the robustness of its stature shocks with a dose of reality.

On the map of the municipality of Gautegiz Arteaga, 40 kilometers from Bilbao, in the heart of the Basque lands of Bizkaia, the presence of this neo-Gothic fortress is outlined. The Urdaibai Biosphere Reserve is the backdrop and protagonist of a story where infinite threads of time and space intermingle. Pulling them, it is possible to travel from its construction in the Middle Ages to its nineteenth-century restoration, with a markedly French character. To get to know the castle better, to see it up close, to feel the limestone and marble of its walls in the palm of your hand… All this is possible by walking through a chronological passageway, illuminated by the light of the stories to be discovered.

A castle for the empress

The Arteaga Castle has been, for centuries, a silent witness of historical events that have left their own footprint on its walls. The imposing figure, seen in the horizon of the estuary of Urdabai or Gernika, revives that well-known desire that the stones speak. The stories that its walls could tell since its construction, with rocks from the quarries of Gautegiz Arteaga, are infinite. 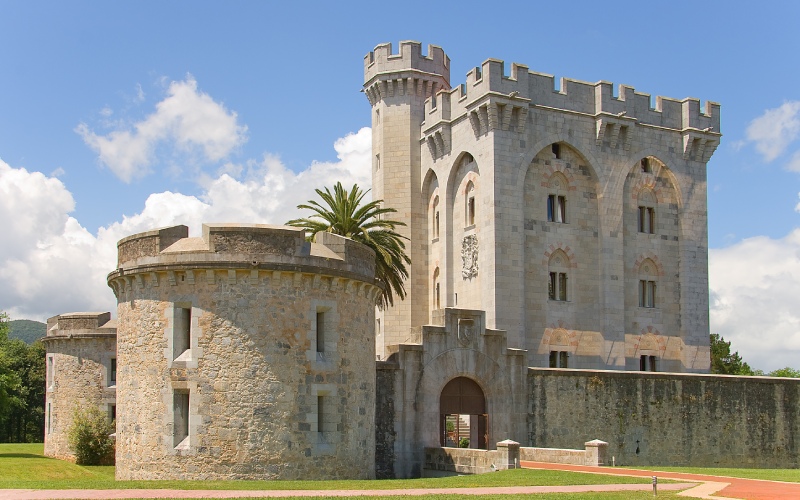 The first formation, from the 13th century, would consist of a walled enclosure with a central keep and four towers, one at each corner. But throughout the fifteenth century its physiognomy was mutating, due to the inclement weather of a geography marked by the climate of the Bay of Bizkaia. Although, especially because of the wars and struggles that it had to face on many occasions. It was even destroyed in 1358 by Pedro de Castilla.

Later, during the Carlist wars, it was taken by the troops of General Velasco, becoming the personal residence of the latter. But before this episode, the future of Arteaga Castle was already uncertain. Little was left of the splendor of its famous towers, Arteaga and Gautegiz, so named in honor of the lands they occupied. Little was left of moats or drawbridges. It remained mute, visited only by the sea air coming from nearby beaches and cliffs. Its silence was surprised by the roar of the waves furrowing the estuary of the Oka River until they broke in Mundaka. The building grew old, inhabited only by the chirping of birds and the vegetation that grew around it. Until a stroke of fate played in its favor, materializing in an institutional decision. 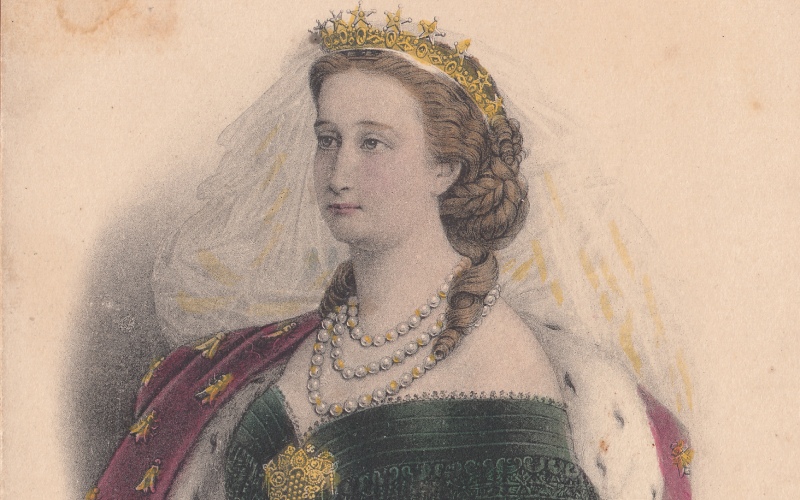 Stamp with an image of Empress Eugenia Montijo.| Shutterstock

It was the 19th century when an unexpected imperial wedding made the political and social chronicles of the Old Continent. On January 30, 1853, Louis Napoleon Bonaparte, nephew of the mythical Napoleon, married a Spaniard, Eugenia de Montijo. The entry of Castillo Arteaga into the imperial equation was due to the ancestry of the beautiful Eugenia. The empress was linked to this historic province due to her kinship with the lords of Arteaga and Gasteiz. Based on this ancestry, the General Assemblies of Bizkaia agreed in 1856 to make the son of the emperors a Biscayan by origin. Thus, Eugenio Bonaparte became the legitimate owner of this fortress located in the southern part of the Basque Country.

Soon after, at the wish of the emperors, work began on the restoration and refurbishment of the castle, entrusting the task to Couvrechet, the court architect. After his death, succeeded by Ancelet, the transformation of the castle resulted in the construction of a neo-Gothic tower. Thus, surrounded by gardens designed by Newman, gardener of the French royal house, a neo-medieval palace rose over the dark blue of the Gernika estuary. The son of Josephine and Napoleon III never occupied his quarters here, even though he sent staff and workers to Versailles from France. 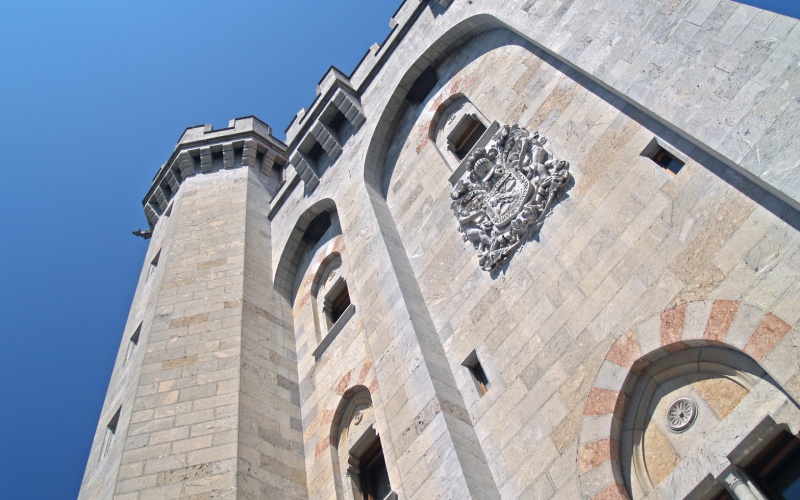 Detail of the coat of arms on the façade. | Shutterstock

Finally, the property remained in the hands of the House of Alba. An oratory adorned by stained glass windows, on the second floor a huge imperial bedroom and, on the main facade, a gigantic coat of arms. These are just some of the elements that made up the four floors, linked by a spiral staircase. From the entrance to touching the sky on the terrace overlooking the valley, the castle is a dream come true in a fairytale setting. 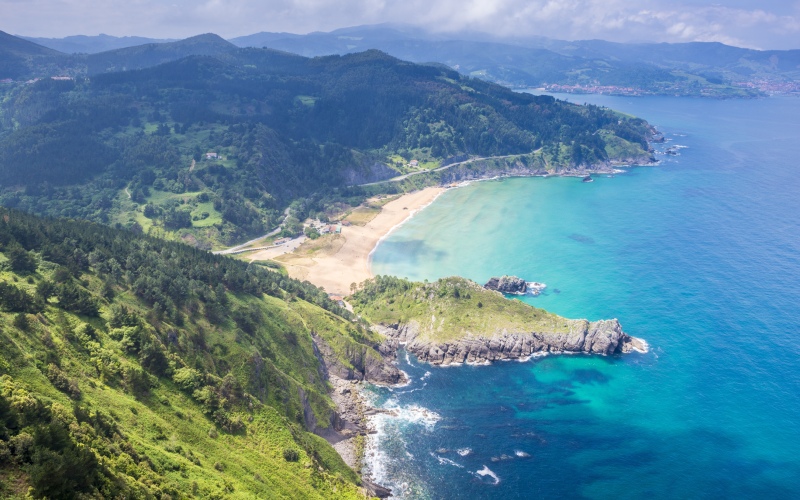 Arteaga Castle is located in a privileged enclave, in the heart of the Urdaibai Biosphere Reserve. A space so declared by UNESCO in 1984, which occupies a changing and surprising geography. Just a few kilometers away, in the blink of an eye, the traveler can find himself in the middle of a nature that engulfs him completely. The visit can begin by looking for a passage through lush forests inhabited by an enormous variety of birds. Here, the Urdaibai Bird Center is a must stop for ornithology lovers. But you can also start by walking through the streets of Gautegiz Arteaga. A walk that ends contemplating the views of the estuary from the chapel of San Pedro de Arratxe.

The kilometers of the Urdabai Reserve are like circles drawn inside the tree trunks. Following its perimeter, little by little, it is possible to follow the history of its life. On the way there are millenary caves, such as Santimamiñe, in the southern part of the Ereñozar mountain. A human settlement, decorated by cave paintings, about 14,000 years ago, declared a World Heritage Site. Continuing the tour, the traces of art and nature come together again in the pine trees painted by Agustín Ibarrola in the Oma Forest. 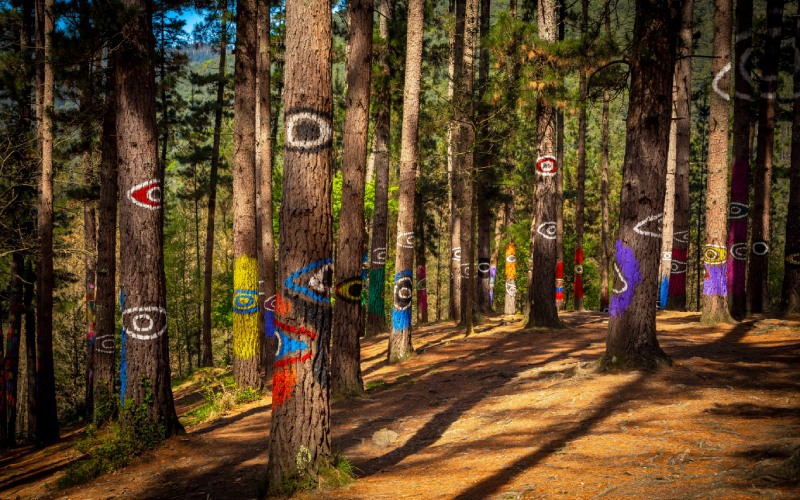 Beyond the trees you can hear the roar of the Cantabrian sea approaching and receding in the sandy areas of Laiga and Lada. Its currents surround the legendary island of Izaro, in front of Bermeo, break against San Juan de Gaztelugatxe, shout, in a wave, the name of Mundaka. At the mouth of the Oka River, awaits the beautiful botanical garden of Txatxarramendi Island, which keeps anchored to its shore the secret of the Roman port of Portuondo. Meanwhile, the Middle Ages await at the top of Ereñozar, full of legends and walled vestiges. From there, the view is lost over the mountains of Durangaldea.

Already in the last circles of the trunk, the present offers urban environments with an irresistible cultural offer and, localities with names that transpire authentic history. From Gernika to Bilbao, Bermeo or San Sebastián or, behind the border, the seaside resort of Biarritz, following in the footsteps of Eugenia de Montijo.

The surroundings and the Arteaga Castle and Urdaibai offer a thousand possibilities. But it only takes a few minutes, just a few steps, to realize that this is a volume that invites to be reviewed page by page, from beginning to end. And in the epilogue, again the castle as the end of the journey or reading, contemplating the horizon from a tower, reading among the clouds.

Basque Country, Bizkaia, castles, history, nature
It may interest you...