The village divided by the sea

Pasajes de San Juan was formed in the union of various historic districts that converge in the bay, connected to the sea by a narrow strait of water. It is worth visiting and pondering over this area (especially if you see a large ship pass through the hanging bridge), as it constitutes one of the most picturesque heritage sites of Guipúscoa, in addition to being an excellent place for a meal.

Pasajes de San Juan is a place as unique as it is attractive. Its role as a great connecting port hides the small and magnificent environment at the natural mouth of the Bay. Its accessibility and small size affect the accommodations for visitors, for example its outstanding cuisine and low prices.

The history of the town goes back to the creation of two small villages, San Pedro and San Juan, that received their names based on the dedications of their parishes and located on each side of the natural, narrow channel that flows into the Cantabrian Sea. During the 13th century, San Juan was under the constituency of Hondarribia, and San Pedro in San Sebastian’s area of influence. As a result, the development of the port area was different under two constituencies.

In the history of Pasajes de San Juan during the Middle Ages it exported iron, wool and other goods to Europe, while various products from the Mainland entered through it to Spain. In regards to the movement of ships through the passage, the golden era started during the 16th century. At this time, major ships were built for the Crown, as well as giant fishing boats for cod and whale that, each year, departed to Canadian waters for their catch. The commercial  character of the port was accentuated in the 18th century, when the company Guipuzcoa of Caracas was developed, which promoted trade with the rest of the Spanish Empire.

In 1689, Blas de Lezo was born in Pasaia, a marine and military man who came to be nicknamed “Middle man,” having lost on separate occasions during his career an eye, an arm, and a leg. In 1741, as Commander of the square of Cartagena de Indias, he was attacked by the English squadron of Admiral Vernon—comprising of 186 ships and 27,600 fighters—in one of the most humiliating defeats in military history of all time, because he only had 6 ships, 3000 soldiers and 600 Indian archers. The English were so confident of their victory before such a disproportionate battle that they minted coins and commemorative medals beforehand in celebration.

In 1770, San Juan dissociated itself from Hondarribia and became an independent entity. Years later, in 1805, San Pedro followed their steps by emancipating from San Sebastian. Afterwards the two populations merged, giving rise to a single administrative entity that controlled the port jointly and became known as Pasaia-Pasajes. A curious figure in this dock of Pasaia were the bateleras, women who were in charge of the human transport across the bay using row boats. 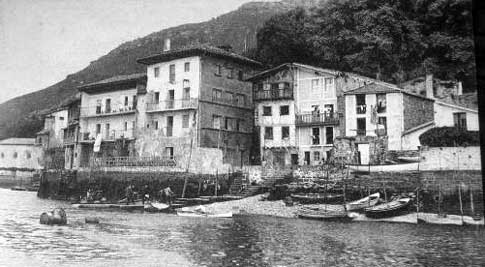 In 1794 and 1808, Pasaia was occupied by the French, but due to the lack of fortifications, there was little fighting, so many historical artifacts of the area were saved, making it an exception in the region.

Between 1906 and 1907 the ceramicist Daniel Zuloaga lived and worked in the ceramics factory of the town creating numerous works for bridges, hotels and houses of San Sebastian. Among his works that can be found today, for example, is the Mural of the port of Pasajes de San Juan. el ceramista.

What to see in Pasajes de San Juan

Pasaia-Pasajes was formed out of four populations located on the river Oyarzun: Donibane, San Pedro, Pasai Antxo and Trintxerpe. The last two form the continuous eastern urban neighborhood of San Sebastian. Of these four districts, Pasai Donibane has the most tourist and heritage charm. Located on the eastern part of the river mouth, the urban area runs parallel to the River along a single paved street (San Juan or Donibane kalea street), which closely meanders towards the sea, passing typical fishermen’s houses that blend harmoniously with other stately buildings. From time to time, the street becomes tunnel a few meters deep. On this street, the French writer Victor Hugo wrote in the 19th century: “nothing more power or serene than reflecting by the Pasajes of the side of the Bay; nothing more severe, or more somber than the Pasajes seen from the mountains. Their houses are palaces in the front and huts in the back.”

The square of Santiago, where a line of old buildings look out on the estuary, is the only opening on the main street. The width of the mouth of the Bay, enclosed between Jaizkibel and Ulia, does not exceed two hundred meters, and if you’re lucky, it is amazing to observe how gigantic industrial vessels significantly higher than the tallest house, pass through towards the piers of the port.

Despite its slim dimensions, there is much heritage in Pasajes de San Juan. You can start your visit from the jetty, where you may find boats that go to both sides of the Pasajes. There you can see the Humilladero de la Piedad (1580), a small construction of popular Renaissance style that houses an altar that shows the Basque victory over the troops of Charlemagne in the battle of Roncesvalles.

On the side is the Palacio de Villaviciosa (16th century), which is also Renaissance style. You can then take San Juan Street, which boasts the highest concentration of monuments in the town, such as the parish church of San Juan Bautista, from the 17th century. It is made from the temple of a ship, and contains the Latin cross and severe facade of Herrera style, which are unique in form. In the interior is an urn with the completely preserved body of Santa Faustina. A curious feature is the the head of stone embedded in the wall of containment that is near its herrerian style door. To this day the meaning and the authorship of the artifact is still unknown, although among those of the area it is commonly called “figurehead of Iriberri”. Farther along and on the same street you can find the Casa Arizabalo (17th century), a building of Baroque style in which the town hall is currently housed; the Casa Solar de los Platain, from the 16th century, and the Casa Gabiria (or the house of Victor Hugo) a typical Pasaia house built in the 17th century and with direct access to the Bay. The French writer lodged here during his stay in the town, in 1843, and today it houses an exhibition on the writer, in addition to the office of tourism and several other exhibition rooms..

San Juan Street leads to the Plaza de Santiago, in the central part of which you can find the old Town Hall (1735), a perfect example of a Baroque building that harmonizes perfectly between fishermen’s houses.

The Santo Cristo de la Bonanza Church is the oldest temple in town. Constructed in 1399 and rebuilt during the 18th century, on its West facade you can find a wooden door with carvings, made by knife, of boats from the 18th and 19th centuries.

Exiting through the the old door of the wall, you can pass through the Puntal, a route that runs along the mouth of the port until it reaches the ruins of the castle of Santa Isabel (17th century), which was built along the shore of the sea to protect the entrance of the port, and was in operation from 1621 until 1867. 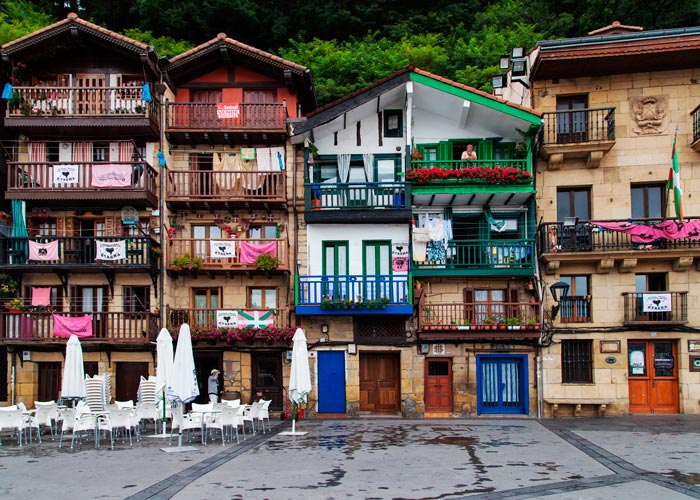 Another element of interest, situated high above the old town, is the chapel of Santa Ana, from which you can enjoy a magnificent view of the Pasajes and its port.  Constructed in 1758, it is a simple building with a  rectangular floor plan and a single ship. Inside the image of St. Anne with the Virgin on the altarpiece of the high altar draws the most attention. It was acquired in Flanders in 1573 and carried by maritime transport here.

Nobody summarizes Pasai Donibane better than Victor Hugo, who said that it’s a “magnificent and charming place, as if it has double the character and joy and greatness; this unpublished corner is one of the more beautiful that I have seen and that no tourists visit; this humble space of the land and sea that would be admired if it was in Switzerland, that would be famous if it was found in Italy, and that is unknown because it is located in Guipúzcoa, this small Eden to where I arrived by simple fate is called in Spanish Pasajes and in French Passage”.

Basque Country, Gipuzkoa
It may interest you...

Spain’s Most Colourful Quarters
[vc_row][vc_column][vc_column_text]Walking through any of the Spain's most colourful quarters can be a genuine delight. Colourful Más información

Irun – Irún
[vc_row][vc_column][vc_custom_heading text="Elegant border crossing and scene of battles" font_container="tag:h2|text_align:left|color:%23000000" google_fonts="font_family:PT%20Sans%20Narrow%3Aregular%2C700|font_style:700%20bold%20regular%3A700%3Anormal"][vc_column_text]The place is one of the Más información