The Knights Templar were founded around 1118 to rescue Jerusalem from the Turkish occupation and protect the faithful. The Templars were very important on the Iberian Peninsula, especially in the north, in the Crown of Aragón. Although it was in these areas that they lived a more privileged situation, they also had a strong presence in Mallorca. The history they left behind is immense, as is shown by the numerous castles, hermitages and churches scattered throughout the country. In Mallorca it is possible to find many of these places, where their legacy is still alive. We trace the steps of the Knights Templar on the island; where part of the myths and legends of these knights in the Balearic Islands are condensed.

The arrival of the Templars in Mallorca 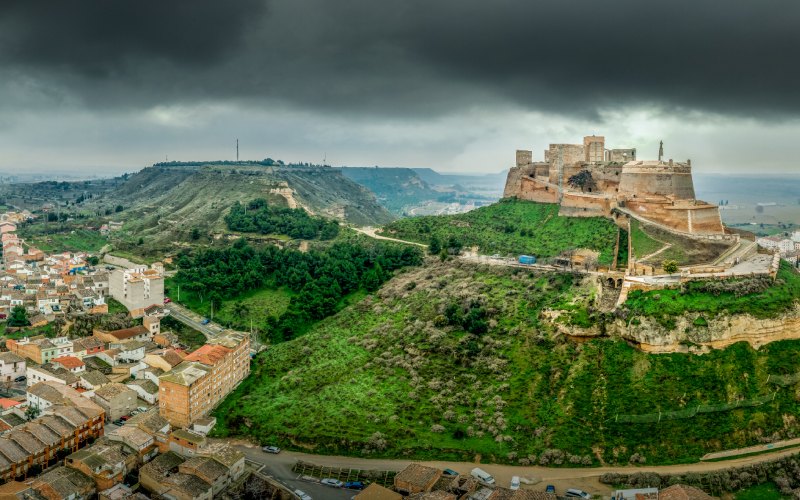 The Templars in Mallorca are strongly linked to the conquest of Jaume I; the most important monarch in the history of the island. He was educated by the Knights Templar. The monarch’s father died when he was a child and he inherited the throne from the Crown of Aragón. He was succeeded by Guillem de Montrodón, master of the Order at Monzón Castle.

Jaume I’s beginnings were complicated by the doubts that the nobles had about his ability to reign, given his age. He was determined to put an end to these conflicts and aimed to improve the Kingdom’s economy to prove it. To do so, he decided to conquer Mallorca. Later, he divided the territory among the nobles who accompanied him in the conquest; according to the Libre del Repartiment. This book is kept in the Archives of the Kingdom of Mallorca.

The Temple took part in the conquest of Mallorca through the Christian struggle, confronting the Muslim resistance on the island; there were up to 300 fighters of the Knights Templar. According to the Libre del Repartient, some enclaves also corresponded to the Temple; in which some vestiges remain that allow us to see the passage of the Templars in Mallorca.

Pollença, the city with the greatest legacy of the Templars 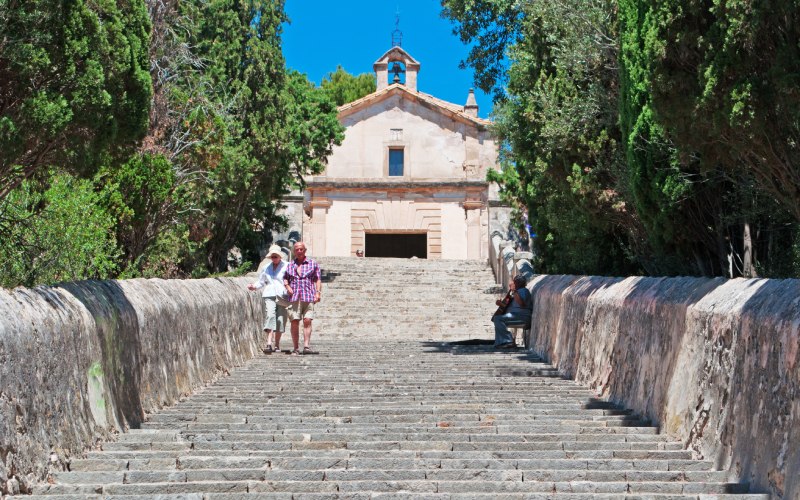 The city of Pollença preserves numerous testimonies of the Templars, a perfect place to start the route through the Order’s legacy in Mallorca. Among them, the house where the lieutenant of the Templars lived on the island, located between the streets of the Temple and Columbus, stands out, although it has been somewhat transformed. The Casa de S’Ombra and the Casa de S’Aigua were also Templar houses.

The whole area belonged to the Knights of the Cross Pattée. A short distance from this residential area is the church of Santa María dels Ángels, which was the former Templar convent of the city. But it is especially worth mentioning Mount El Calvario, located in Puig del Temple; one of the most emblematic places in the city. The 365 steps to the top represent, according to Christian history, the Calvary that Jesus suffered when he was crucified.

Templars were the first owners of the mountain, after receiving the lands for the help in the conquest of Mallorca. It was used as a place of execution for criminals. On the highest peak is the funeral chamber, known as “Les Forques”, used by the Templars as a sign of power and much feared at the time by the inhabitants.

In addition, on the way to the Castell del Rei it is possible to find vestiges of the Order. This area, known as the Huerta de Polleça, belonged to the Templars. Today the water mills, the L’Algaret fountain and the waterwheels used at the time are still preserved. In fact, the Templars contributed to the construction of the first windmills powered by wind energy, used to obtain flour.

The Knights Templar in Alcudia 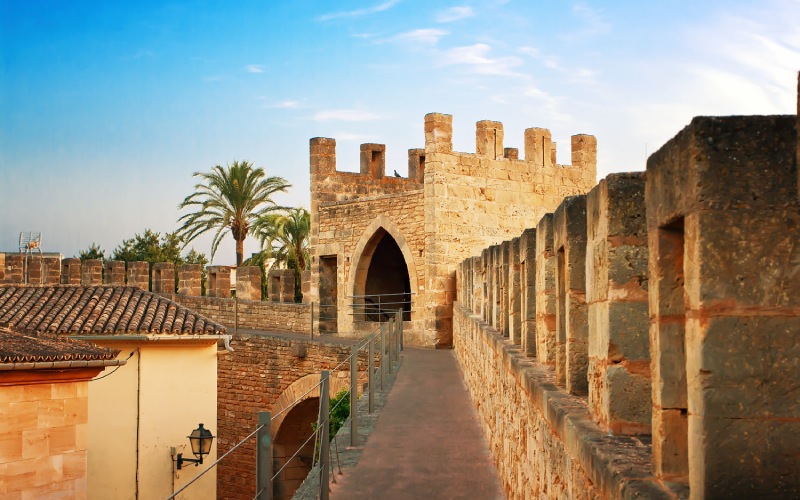 The Templars were present in Alcudia, Mallorca. | Shutterstock

Alcudia is considered one of the most beautiful villages in Mallorca thanks to its beaches and, above all, its cultural and historical heritage. It is a place full of history with remains of different civilizations. With the conquest of Jaume I it was left in the hands of the Templars; and we can still find traces of the presence of the Order.

The Hermitage of Santa Ana is an example of this, strongly related to the Templars, built during the period of the conquest. Another legacy of the Order is the Cova de Sant Marti, which houses two altars dedicated to St. George, a saint highly venerated by the Templars. In addition, its walls contain symbols that were made by monks of the Temple. 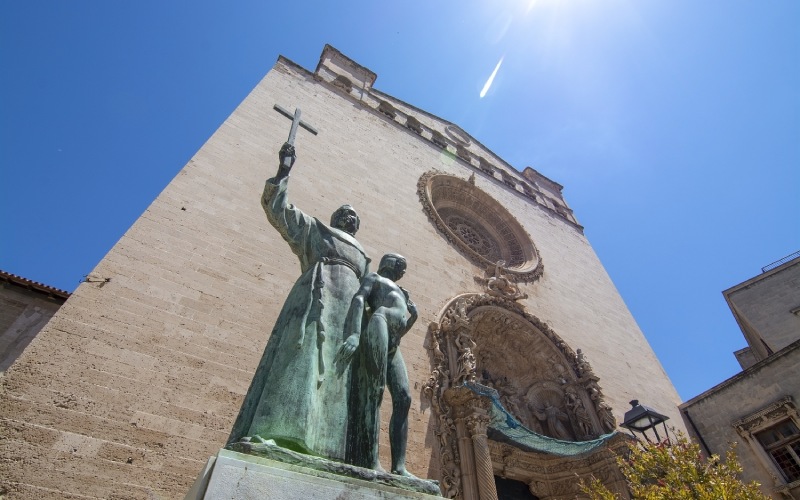 In the capital of the island it is possible to find some traces of the Templars and enclaves related to them, also with the Order of Calatrava and the Order of St. John of Malta. On the outskirts of the city is the Monastery of Sant Bernat de la Real, where the camp of Templars and nobles for the conquest of Mallorca was set up together with Jaume I; for the siege of Medina Mayurqa, the name of Palma de Mallorca during the Muslim rule. The Torres de Gumara, known as the Towers of the Temple, located in the heart of the city, are particularly noteworthy. In ancient times they formed part of the fortification, of which only the towers and a church remain.

These towers were the place where the Templars guarded the loot seized from the Muslims during the conquest. It was also the headquarters of the Royal Archive where the documents of the Royal Chancellery were kept, including the important Libre du Repartiment, where it is possible to read part of the history of the Order on the island.

In the Basilica of Sant Francesc is the tomb of Ramon Llull; a Franciscan who was a great friend of the Temple. In addition, it is possible to admire the works of the Templar stonemasons in some of the figures of the main vault.

These are some of the most characteristic places in Mallorca to enjoy the legacy of the Templars on the island, castles, churches and fortresses full of myths and legends about the Knights Templar. If you would like to continue exploring more places, although with fewer remains, you can visit the monastery of Lluc, in the Tramontana mountain range, donated to the Templars as a farmhouse, where you can find the image of the Black Virgin, which is of great importance in the Temple. An ideal route to discover the traces that these Templar knights left on the island until their dissolution.

Balearic Islands, history, mallorca, Templars
It may interest you...