The taste of traditional cheese between mountains

It was the first capital of the Kingdom of Asturias and today has become a cozy villa, meeting point of many routes, in which hikers and adventure sports enthusiasts, and nature are attracted. Its cheeses also stand out.

This beautiful town can be visited in one day, although there is much more to do in the surroundings (this is an area that could take a week to visit). Cangas de Onís is the basis for those wishing to enter next three natural parks as well as in the historic setting of Covadonga. This is set in the middle of the natural beauty of the National Park Picos de Europa. You should not leave without visiting the Mirador de la Reina. It is recommended with a minimum hiking equipment and walk the mentioned park, especially in the area of ​​the lakes of Covadonga. Other very important (and least known) parks nearby are Ponga (especially the beech forest Peloño) and the imposing reserve biofera (UNESCO) Redes.

Cangas de Onís is one of the most historic towns in western Asturias. There are traces of human presence from the Paleolithic, as the Buxu Caves and los Azules sites prove. Already from Neolithic times are caves Salmula, Trespando and Cuélebre. The megalithic heritage of Cangas is also abundant, being one of the best preserved monuments of the Dolmen de Santa Cruz. Both the Paleolithic caves like this dolmen are decorated with cave paintings.

Roman Empire and capital of the Kingdom

The situation of this area on the border between Asturian and Cantabrian peoples indicates that it was a place of passage necessary for the troops of the Roman Empire. The roadway, route of communication with the territory of present Cantabria, and the famous Roman bridge (known as the Puentón) are the material evidence of its strategic importance. After the victory of Covadonga in 722, Cangas de Onís was established as the capital of the kingdom of Pelayo. Alfonso II, who extended the borders of the kingdom, moved the capital to Oviedo in 792.

It appeared with its current name for the first time in history in an inventory of rights of the episcopate of Oviedo, fourteenth century. In the will of Henry II of Castile (1333 / 34-1379), where the legacy of his bastard son detailed, the council of Cangas de Onís was part of the patrimony of the crown. In 1505, the General Junta of the Principality of Asturias formalized the ancient capital of the kingdom of Asturias.

Thanks to this recognition, the Crown of Castile began to worry about Covadonga. Philip III began to transform the Royal Site, and promoted major reforms in the cave. Charles III continued this work by funding the construction of a new temple and important improvements in communications with the Plateau and the rest of the Cantabrian side. 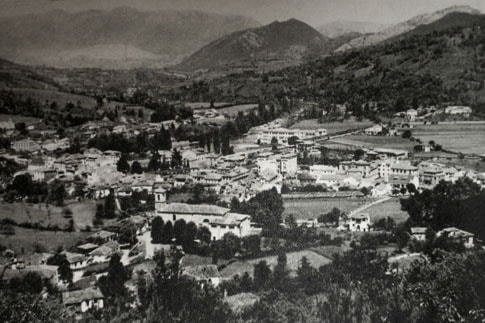 Cangas de Onís in the Wars

During the nineteenth century, Cangas de Onís actively participated in the War of Independence, being capital of one of the military governments. Both the plunder of French troops as the confiscations and actions of the Carlist damaged the council. However, since the mid-nineteenth century, roads Ribadesella and Pontón contributed to its development.

Cangas de Onís severely suffered the consequences of the Civil War and Postwar. Most of its low urban fabric was bombed or looted. Interestingly, in 1978 Cangas again became the capital of the Principality of Asturias. The reason was that the Regional Council of Asturias met there with the task of preparing the draft Statute of Autonomy. Today, it is a key center of Asturian adventure tourism.

What to see in Cangas de Onís

Within the urban center of Cangas de Onís, the visitor should approach the Hermitage of Santa Cruz in Contraquil. This temple, considered one of the oldest in Spain, was founded in 437 by the Astemo bishop. He built it on the floor of a Roman temple which, in turn, is built on a succession of places of which the first is a megalithic monument (the Dolmen of Santa Cruz is indeed in the crypt of the Christian church).

The hermitage was rebuilt in 737 thanks to the promotion of Favila and in commemoration of the victory of Covadonga. The present church is from the Postwar, but follows the traditional lines of Asturian architecture.

However, the most representative monument of the town is the Puente Romano or “Puentón”. A Historical and Artistic Monument located on the River Sella, with a stylized and high silhouette. It has a stilted arch and two smaller and uneven, the center of which hangs a reproduction of the Victoria Cross. Although always has been attributed to Roman times, it actually is from the reign of Alfonso XI (1311-1350).

The Classroom teaching about the Kingdom of Asturias is an adaptation of the ancient Church of Santa Maria de Cangas. It explains in a very entertaining way the local medieval history. The Chapel of San Antonio, in Cangas de Arriba, was built in the sixteenth century and reformed in the XIX. In this small temple of unique nave is celebrated the festival of Cangas de Onís (13 June) each year.

Another point of interest to see in Cangas de Onis is the Market Square. In Cangas, the liveliest day of the week is Sunday, market and working day. The shops are open and the market is overflowing with small producers of cheese, honey, cider and other fruits from the garden.

Asturias has thirty varieties of cheese, which makes it the largest in Europe with cheese diversity. Cangas de Onís has Specialized shops where vacuum cheeses are sold ready to take home. In the market you can also find the traditional madreñes, the typical Asturian countryside footwear. 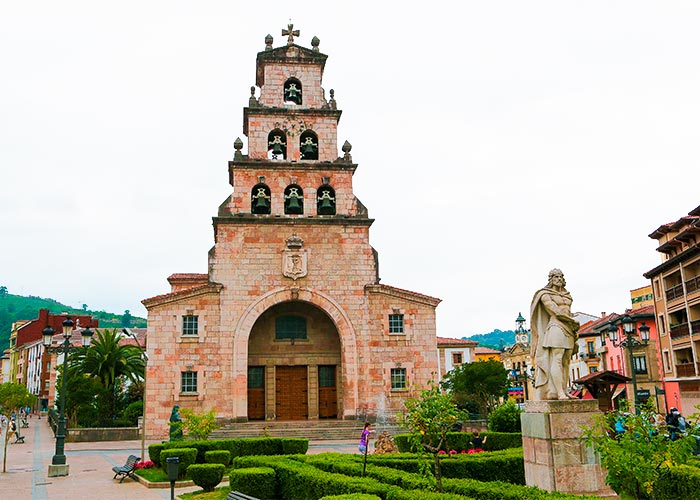 Places with a lot of history

The Parish Church (1963) is a building with three naves, with an outstanding transept on the floor and a three-storey belfry tower. Inside it is decorated with stained glass windows by the famous Catalan company Maumejean.

In front of it, in a small garden, the statue of a warrior Pelayo, work of Felix Alonso, rises. In the same square there is also a sculpture that shows an old Asturian woman with a toquilla. It is a modern copy that reproduces to greater size the original model made by Sebastián Miranda.

Cangas de Onís near the Redes Natural Park or Ponga Natural Park. Routes such as Los Beyos, the Cares, or the Brañagallones, offer a wonderful opportunity to enjoy the beauty of the area, or isolated brañas that serve as shelter to the flocks of transhumance. In the council there are grizzly bears, wolves, grouse and otters, although it is difficult to see them released. It is advisable to visit the Grandera Center for Native Fauna, zoo and hospital for native animals.

As in most of the Asturian councils, Onís is enriched by contact with the people and parishes of their environment. In that sense, 7 km is Corao, and nearby, the Church of Santa Eulalia de Abamia. It is said that there was buried Pelayo and his wife Gaudosia before being transferred to Covadonga. Who remains buried in the place is Roberto Frasinelli, “the German of Corao”; a romantic character who had much to do in the resurgence of Covadonga. Unfortunately, the oldest that remains are two Romanesque doorways and Gothic remains of mural paintings in the apse.

More archaeological importance has the Monastery of San Pedro de Villanueva, founded in the mid-eighth century. The current convent is from the seventeenth and eighteenth centuries. The apses of the Romanesque church are from the XIII century, forming three chapels interconnected preserved. Both in the capitals of the columns of the entrance arches and the communication there are extraordinary Romanesque sculptural works. Similarly, the capitals of the southern front highlighted by the appearance of hunting scenes, in which some have seen the death of King Favila at the hands of the bear.