Ortiguera is a beautiful village on the coast of Asturias belonging to the municipality of Coaña. It is unique in that it has two lighthouses for a population of only 1,000 inhabitants. It is a fishing village located only 20 metres above sea level. In addition to its remarkable beacons, the coastal landscape is also worth admiring; as is the beautiful chapel of San Agustín.

Fishing tradition and the construction of the port

The village of Ortiguera was founded around the 14th century and since then it has had different names. It was first called Ortigal, later Ortigueral and finally Ortiguera, as it is known today. Being a coastal and seafaring town, the locality has a beach and a small port. It is worth noting that the locals do not get bored, as different celebrations take place throughout the year. These are held on two dates, the celebration of El Carmen in July and the festivities of San Agustín and La Caridad during the first weekend in September. 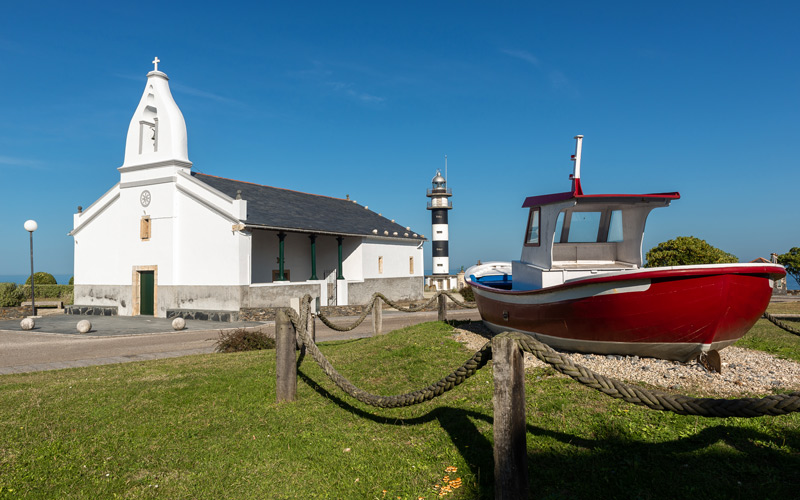 This village on the western coast of Asturias was created thanks to the sailors’ houses that were built on the slopes of a small valley that merges into the Cantabrian Sea. Its fishing tradition goes back several generations, where lobster fishing and whaling were practised for several centuries. Its development did not take place until the Middle Ages, when it managed to establish itself as a whaling port. In the past, the sailors of Ortiguera moored their boats on a flat but very rough rock, which is why, some time later, it gave the green light to the project that would end with the curious port of El Ribeiro.

Ortiguera is a perfect village to get lost in, far from the hustle and bustle; as it gives the sensation of being lost in a hidden place. The village opens out onto the Cantabrian Sea, offering one of the most picturesque panoramic views of the western coast of Asturias, where the slopes and cliffs that end in the middle of the sea also stand out.

It is a pleasure to stroll through the streets of Ortiguera in such a way that the village gradually reveals itself to the visitor. The typical seaside dwellings open up in the lower part of the town, with all the charm that surrounds them being so close to the sea. 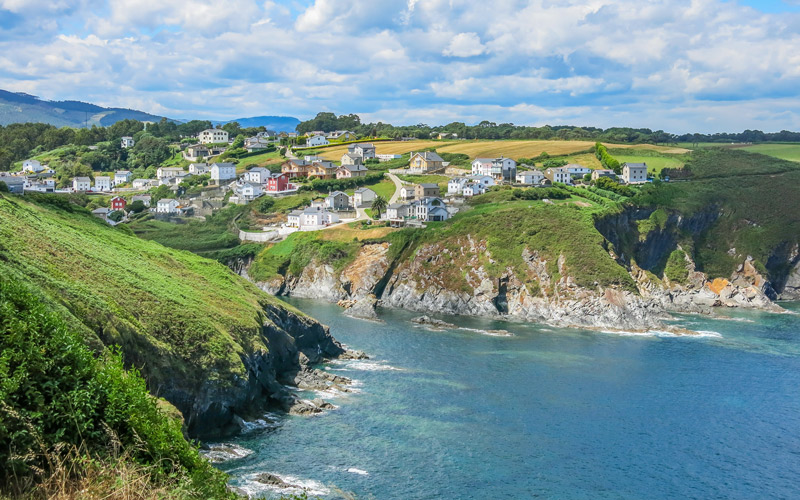 In the highest part of the village you can enjoy the buildings of Indian architecture, the result of the inhabitants who once tried to make their fortune in America. It is interesting to note that all these houses have views to the sea. One of the most spectacular is called Quinta Jardón, located just above the port. The whole complex forms a striking image: its white façade, its French-influenced garden, its red windows, the lookout tower… Thus, the Jardón family is a symbol of the town’s progress in the 19th century.

Ortiguera and its two lighthouses 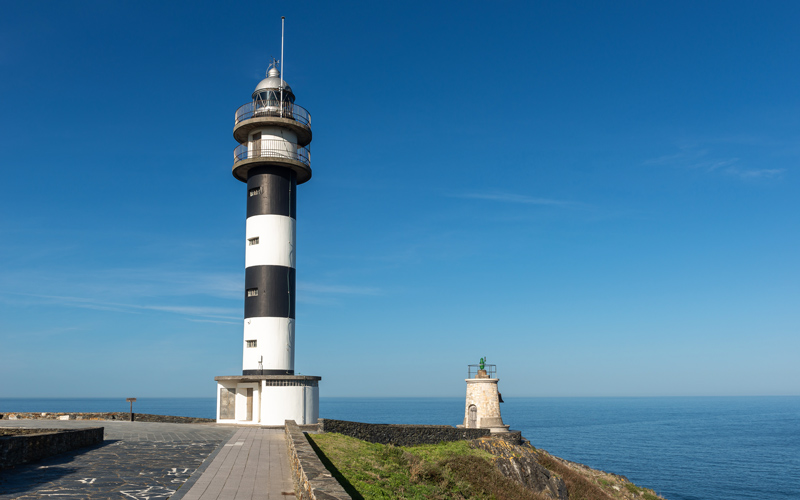 San Agustín lighthouse and old lighthouse in the background. | Shutterstock

It is really striking that such a small town has two lighthouses in such good condition. One option that never disappoints is to walk to both, as they are close to each other; both located on the cape of San Agustín. The old lighthouse is distinguishable at first glance, as it is a simple yet very picturesque old flashing beacon located on a promontory that rises 62 metres above sea level. It is almost six metres above the ground and dates from 1945.

It used to have an acetylene lantern on its tower; which could reach up to ten nautical miles and was lit automatically. On foggy occasions, the lighthouse has an iron bell that was used as a warning device. The women used to gather next to the old lighthouse to bid farewell to the sailors who embarked to go out to sea. 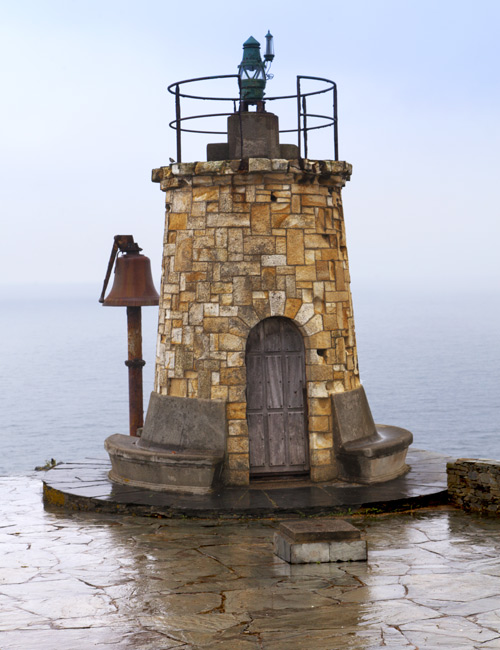 Old lighthouse with bell next to it. | Shutterstock

The new lighthouse of San Agustín cape has beautiful gardens around it and excellent panoramic views; from where you can see the beach of Navia. Close to the lighthouse is the white hermitage of San Agustín, which gives the whole complex even more charm. On one side of the lighthouse there is also a monument in memory of the local fishermen who have lost their lives in shipwrecks.

The lighthouse tower is cylindrical, 20 metres high, and has a nice black and white horizontal stripes. It was completed in 1975 to replace the old beacon. Thus, the lighthouse of Cape San Agustín is limited to the west by the port of Ortiguera and to the east by the beach of Arnielles, located in the Navia estuary. With a range of 20 nautical miles, the town in charge of assisting it is Tapia de Casariego. 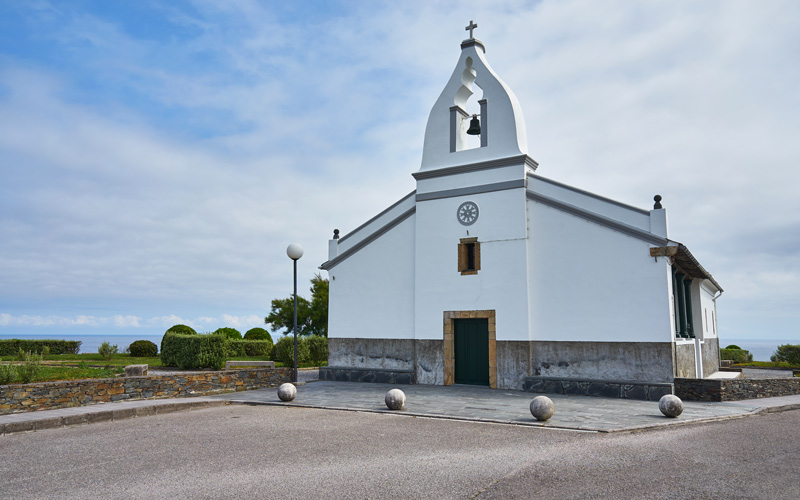 The hermitage of San Agustín is located on the cape of the same name next to the lighthouse. This space where the gardens, the two lighthouses, the monument to the shipwrecked and the hermitage converge creates an almost magical scene. It was founded in the 17th century by the fishermen’s guild belonging to the port of Ortiguera.

In those days, masses were held in the hermitage for the fishermen to express their gratitude that they had not suffered any mishap on their return home after fishing. Since its creation, several remodelling works have been carried out until it became the spacious hermitage it is today.  During the celebration of El Carmen on 16th July, tradition has it that the image of the Virgin is lowered from the hermitage of San Agustín to the Rula (in the port), where it rests for a night. 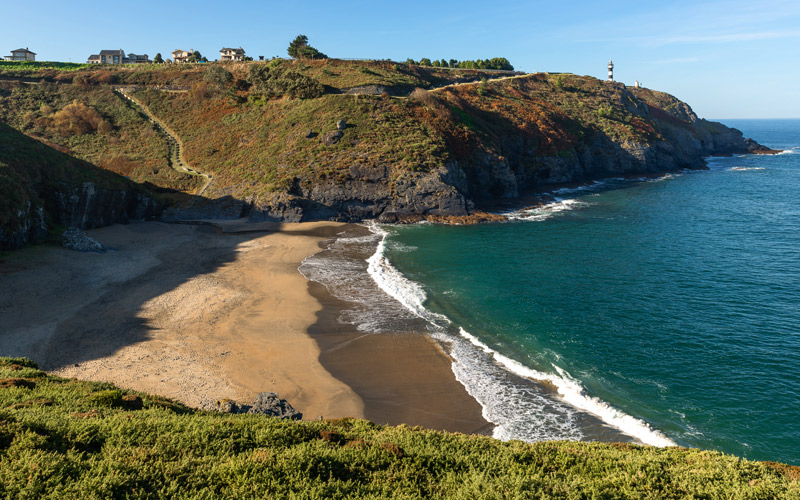 The beach of Arnelles is characterised by being sandy and having a limited length of 150 metres, surrounded by several cliffs. It has two accesses, one from the village of Ortiguera and the other from the village of Foxos. Both accesses are via stairs that lead down to the beach; from where there are excellent views of the cape of San Agustín. It is a perfect place to cool off in summer and rest on its golden sand; although it should be borne in mind that the waves are usually moderate.

Estepona, the Garden of Costa del Sol
[vc_row][vc_column][vc_column_text]Estepona is surprising for the variety of activities and landscapes offered by this municipality of Más información

11 Fishing Villages for this Summer
Not all of the coast are beaches. Along the thousands of kilometres of Spanish coastline Más información