Seville, in the autonomous community of Andalusia, is a city that has been linked to the Guadalquivir River since its beginnings. It is the only navigable river in Spain and the relationship between the two has always been complicated. On the one hand, thanks to the river’s course, this nucleus managed to become the epicentre of trade with America. Not in vain, the outlet to the sea it offered was really key to their relations with the New World. Today it continues to be a source of wealth and a symbol of the city. At the other end of the scale were the floods and the pollution. Be that as it may, 1,400 years ago the river looked very different, forked. A Visigothic battle was responsible for this change, marking the history of the city forever. 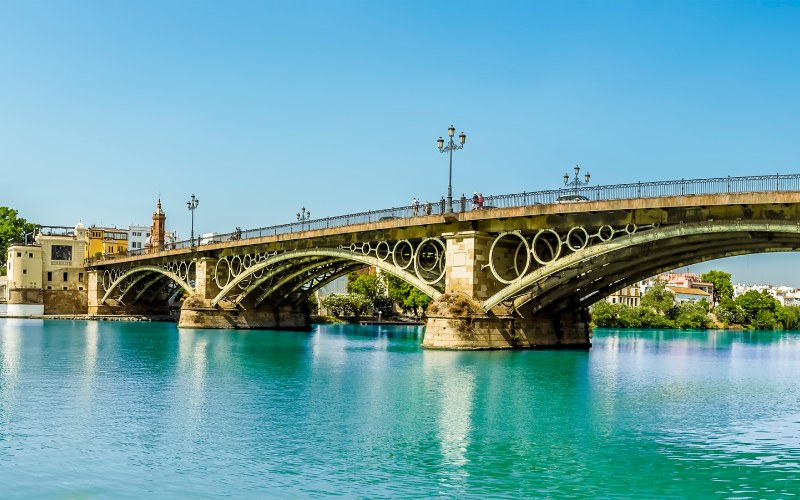 From its origins the Guadalquivir was an important river port, a bridge between the Atlantic and the interior of Andalusia. The first references date back to Tartessos; whose name comes from Tarssis as the river was known at that time, and Phoenicians. Thus, the excavations carried out on the Cuesta del Rosario show that the first human settlement took place around the 9th century BC. Legend has it that a Phoenician merchant, after venturing beyond the Strait of Gibraltar, the boundary of the known world, founded the city of Cadiz. He then decided to go up the Guadalquivir River; founding a colony on the site now occupied by the Plaza de la Alfalfa.

At that time the Guadalquivir had tides up to the height of Alcalá del Río, 20 kilometres above Seville. At that time there was an old estuary, called Iacus Ligustinus. It was formed by the marshes crossed by several of the river’s arms. Ispal, the first Seville, was located on its banks. 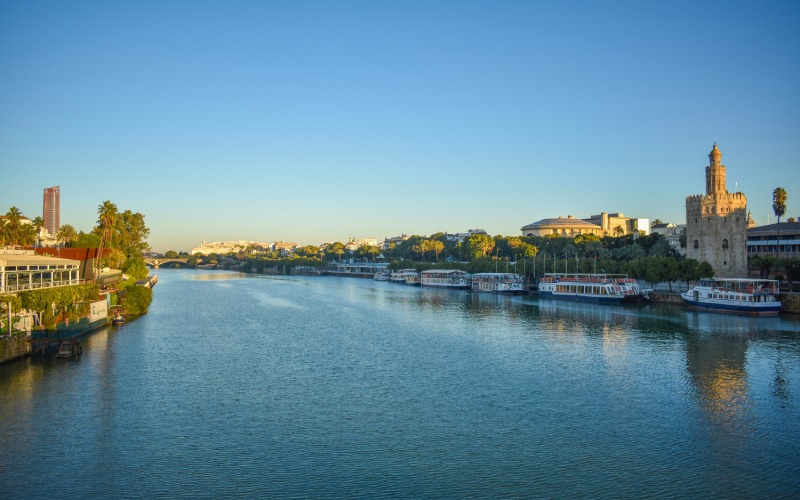 The Guadalquivir River on its way through Seville. | Shutterstock

Initially the town was located between one of the arms of the Guadalquivir and the Tagarete stream and was born as a port city. Later when it grew, it expanded over that branch, which was drained and incorporated into the city. It ran along the Alameda, Trajano, Plaza Nueva, García de Vinuesa. Finally it flowed into what is now the Torre del Oro, reaching the main riverbed. This city, linked to trade, remained in operation until 216 BC. At that time the conflicts between Carthage and Rome; which dominated the peninsula at that time, ended with its fire and destruction.

In 206 BC, with the triumph of Rome, Hispalis was founded, Seville was rebuilt and Italica was rebuilt. With Julius Caesar, the city became an oppidum or stronghold and new walls were built. In 45 B.C. it acquired the title of Cologne and reinforced its role as a crossroads of sea and land routes. The river, which had a fertile valley that allowed good harvests, was flanked by the Sierra Morena, which was rich in mines, especially silver mines.

The Romans made changes to the flow and course of the river to better control it. It was not in vain that it was essential to maintain the service of supply and river transport of goods. Transverse dikes, known as ports, were created to contain the speed of the water and increase its level. The concern for navigability was a constant over the centuries.

The Visigothic modification, the beginning of the change 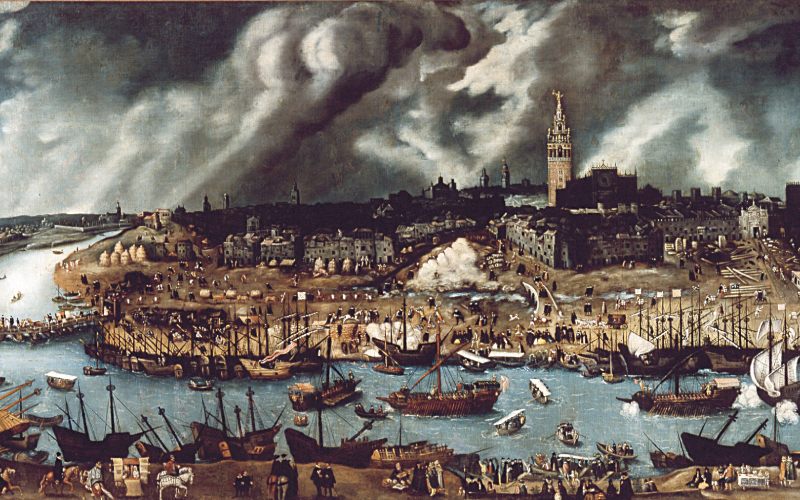 During the 16th century, the West Indies Fleet arrived in Seville via the Guadalquivir River. | Wikimedia

The Visigoths dominated Hispania for 300 years, with Barcelona, Seville, Merida and Toledo as different capitals of their kingdom. During this period, there was no shortage of infighting, such as that which eventually changed the course of the Guadalquivir. It was at the end of the 6th century that the dispute arose.

Hermenegildo was the son of King Leovigildo and the elder brother of the famous Recaredo. He felt increasingly close to the Christian faith thanks to the influence of his wife and his environment. Finally, he ended up being baptised under the name of Juan. This led to an important distancing between father and son, which culminated in an armed conflict in 581. Hermenegildo, who was besieged in Seville by his father, was waiting for help from the Byzantines to arrive via the Guadalquivir.

Until that time, as has been mentioned, the river had two courses. The eastern reinforcements had to arrive via the one that ran through what is now the Alameda Trajano and Plaza Nueva to reach the current location of the Torre del Oro. Leovigildo, in order to prevent Hermenegildo from being helped, built a dam with large stone blocks that ended up drying out that part of the Seville riverbed. He also bribed his allies to remain neutral.

Finally, Leovigildo conquered Seville in the summer of 583, and although Hermenegildo managed to escape in the last moment, he was finally captured in Cordoba and exiled to Valencia. A year later he was transferred to Tarragona and a Goth called Sisberto cut off his head, probably under Leovigildo’s orders. The configuration of the Guadalquivir changed and the river dried up in the centre. The water was cut off from the branch that ran through what is now the Alameda de Hércules, leaving in its place a pool of stagnant water next to the original Roman walls. All this explains the fact that remains of ancient boats have been found in the centre of the city.

Despite this, the Guadalquivir was, above all, an axis of internal communication and circulation of wealth, although with differences in its different sections. During the Al-Andalus period, the river remained important for its commercial activity. From the 13th century onwards, its importance continued to extend until the period of the Crown of Castile. During the 16th century, Seville was the mercantile centre of the western world thanks to its river, the main maritime route for Atlantic traffic. Thus it became known as “the city where the heart of the world beats“.

The Guadalquivir River now and forever 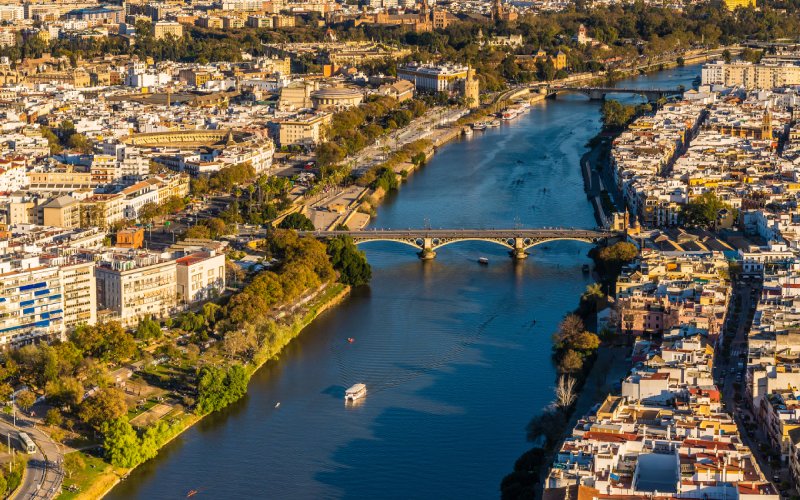 The Guadalquivir River seen from above. | Shutterstock

All the changes and actions in the riverbed of the Guadalquivir from the 18th century onwards were aimed at preventing flooding. In the 19th century when the city began to demolish its walls; the Targarete also had to be buried to facilitate the expansion of the population. Even more aggressive measures were taken during the 20th century, when artificial channels were created, the so-called short ones already started in previous centuries. Their aim was to shorten the course of the river by increasing its depth and flow; thus allowing greater speed of navigation.

Thanks to these actions, a wide and modern port area was achieved, today known as El Arenal, and an orderly urban development towards the south. It would still have room to evolve further. For example, in 1950 the Chapina plug, the Vega de Triana cut and the Punta del Verde lock were created. This further reduced the effect of flooding. Later, during Expo 92, the Cartuja Island was incorporated into the city.

Thanks to all these actions, Seville has been kept safe from serious flooding. On the other hand, on the negative side, it must be taken into account that all this human intervention has eliminated the forests and natural protections of the Guadalquivir basin for centuries. It has therefore contributed to the loss of freshwater and increased the salinity of the river; with its consequent effect on the ecosystem. However, all this would have been different if the distant Visigothic conflict had not taken place. A battle between father and son that marked the physiognomy of one of the most important cities in Spain.

Andalusia, river, Seville
It may interest you...