Palacio de Las Dueñas in Seville is one of the monumental residences where the House of Alba keeps its numerous art treasures. This family is a noble house known, beyond the papier mâché, for being one of the largest collectors of works of art in Spain. This palace, the Sevillian residence of Cayetana Fitz-James Stuart until her death, was also the birthplace of the poet Antonio Machado in 1875. 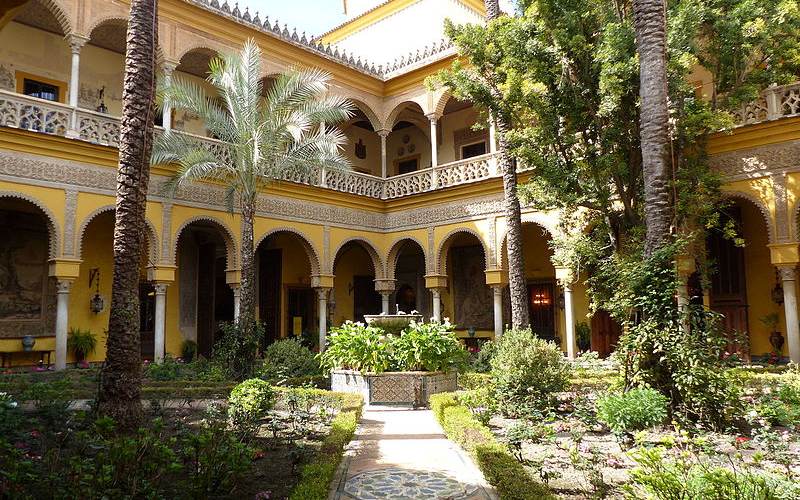 The Alba family is a Spanish noble house originating from the crown of Castile and dating back to the 14th century. The current holder and heir to the duchy is Carlos Fitz-James Stuart y Martínez de Irujo; 19th Duke of Alba de Tormes. It is one of the oldest families of the Spanish aristocracy.

Palacio de las Dueñas was built between the 15th and 16th centuries and takes its name from the old monastery of Santa María de las Dueñas. Located next door, it was demolished in 1868. It was first the residence of the Pineda family, lords of the Sevillian lineage of the Casa Bermeja. Later Enríquez de Ribera, 2nd Marquis of Villanueva del Río and father-in-law of the future 6th Duke of Alba Fernando Álvarez de Toledo, passed the property to the House of Alba in 1612. During the 19th century the building was reinvented as a tenement house. Later, in the 20th century, it became the family residence and received numerous important visits.

The birthplace of a poet 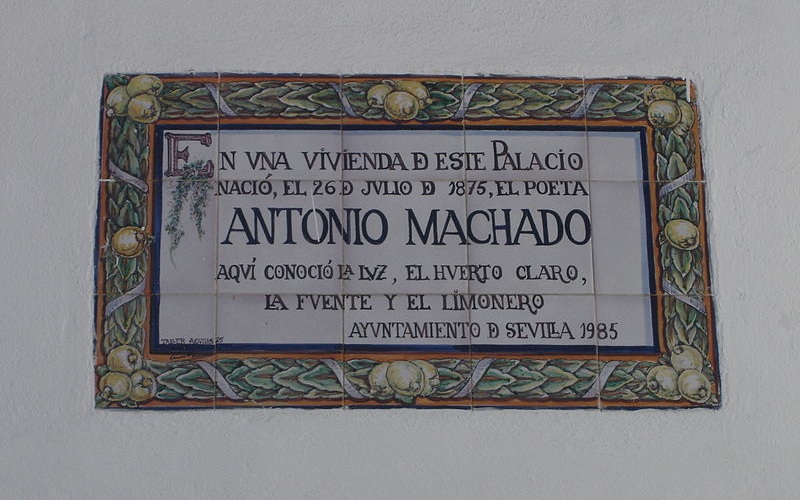 Curiously, during the 19th century, one of the tenants and administrator of the palace was Antonio Machado Álvarez. Known by his pseudonym Demófilo, he was a writer, anthropologist and folklorist. He is also the father of the poets Manuel and Antonio Machado and the painter José Machado Ruiz. For this reason, on 26 July 1875, Antonio Machado was born in one of the rented flats in the Palacio de las Dueñas. Years later, the poet pays a fitting tribute to the palace by recalling the first eight years of his life. “My childhood is memories of a Seville courtyard, and a clear orchard where the lemon tree ripens…” he recalled in Campos de Castilla (1912). Meanwhile, in Nuevas Canciones (1924), he wrote “It is this light of Seville… It is the palace where I was born, with its murmuring fountain”.

The great collection of Las Dueñas

Palacio de Las Dueñas has a total surface area of nine thousand square metres with two thirds of it built up; including several halls, a chapel and, of course, a large collection of works of art. The palace is Gothic–Mudejar and Renaissance in style; and is one of the most unique buildings in the whole of Seville. It contains four spectacular gardens, the best known of which is the garden of the lemon trees. It also has two courtyards, the main courtyard and the Aceite courtyard. 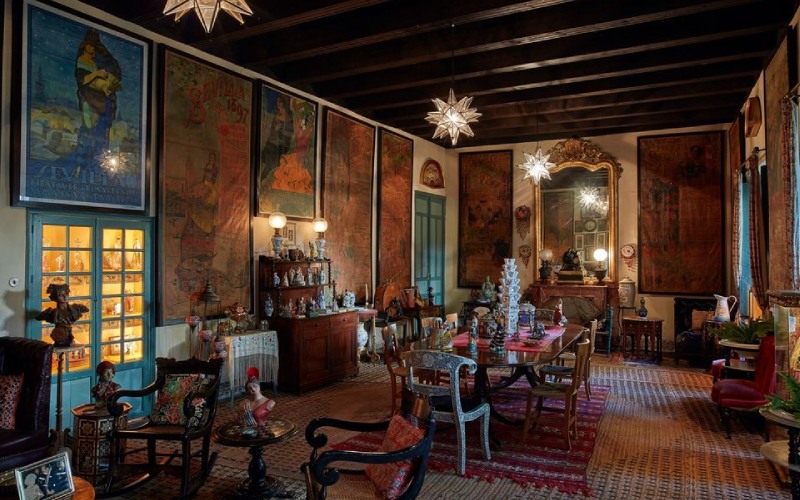 The façade of 1771, where the duke’s coat of arms is located, is worth mentioning. Next comes the first garden and the halt where the carriages were unloaded in the 18th century. There is an important archaeological collection with sculptures from the 1st century BC to the 2nd century AD.

From there, there is a succession of different rooms that house large pictorial works by Spanish artists such as Juan Miguel Sánchez, Gustavo Bacarisas and Enrique Marín Higuero. One room with bulls’ heads and paintings related to bullfighting stands out, with works by Joaquín Díez and Manuel de la Rosa. But no less important is the main courtyard, a great example of a typical Andalusian courtyard. It features a tiled fountain and white marble columns from the 16th century. These are decorated with 20th century cimacios, as well as the plasterwork arches on the upper floor from the 15th century. 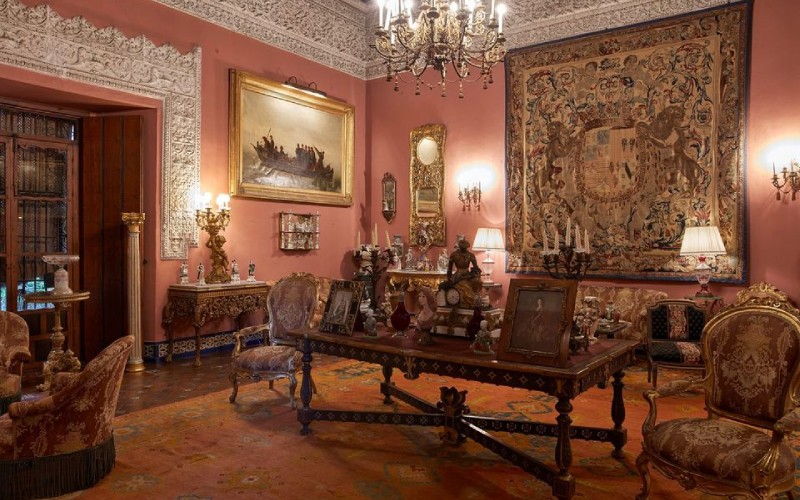 The Hall that houses a genuine art gallery. | Wikimedia

In the antechapel there are paintings by José de Ribera, Lucas Jordán or Baroccio de Urbino. The chapel has a rectangular floor plan and two vaulted bays. Meanwhile, the library has a Mudejar coffered ceiling. Like the previous spaces, the Salón de los Carteles is still a veritable museum room with an infinite number of works of art. In the latter is the bullfighting costume that Curro Romero gave to Cayetana Fitz-James Stuart. The main staircase leads to the other rooms of the Palacio de Las Dueñas; which continue to offer a tour of the palace for hours.

Throughout the 20th century, Palacio de Las Dueñas has had the honour of receiving the visits of the most distinguished personalities. Members of European dynasties and all kinds of personalities from different fields have stayed in the rooms of the palace. Clear examples are the Empress Eugenia de Montijo, Lord Holland, Alfonso XIII, Jackie Kennedy, Edward VIII, George VI, Wallis Simpson or Grace and the Princes of Monaco. 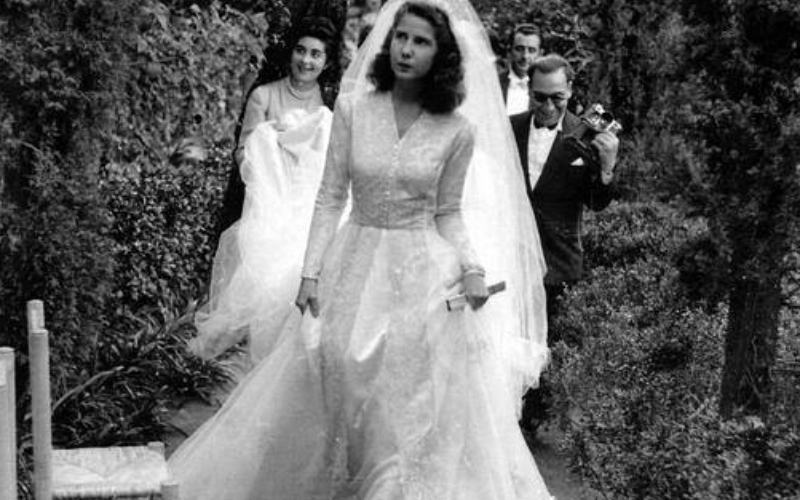 Cayetana on her wedding day in the gardens. | Palacio de las Dueñas

It is said that Américo Vespucio married in the palace chapel. Salvador Clemente Pérez also had his studio in the building and the writer Juan Ramón Jiménez was there as his disciple as a painter, although he later preferred poetry. Marconi, the inventor of the wireless telegraph, was also there with his wife. Likewise, the composer Cole Porter and the musician Arthur Rubinstein played the piano in its halls.

A palace for the people

Cayetana, the 18th Duchess of Alba, married Luis Martínez de Irujo in Seville Cathedral. However, they celebrated the wedding in the Palacio de Las Dueñas. On that day, the Duchess asked for a thousand meals to be served to the poor of the city. In addition, her father paid five thousand pesetas to all the couples who married that same day in Seville; a total of nine. 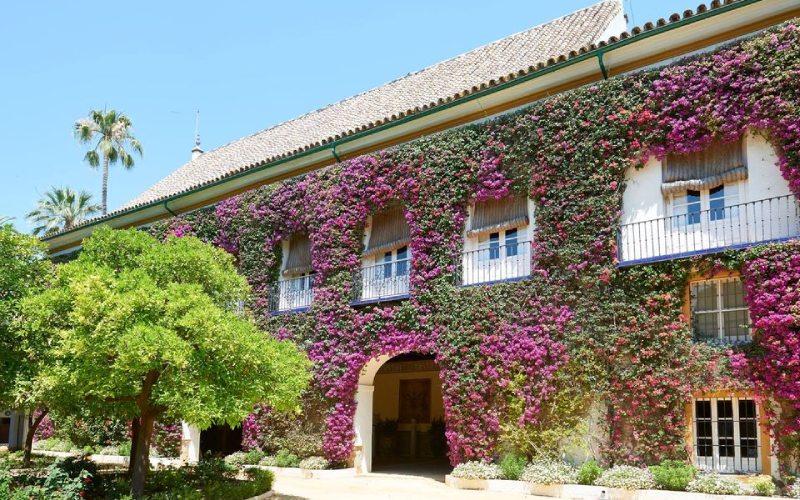 All the palace’s assets are inventoried by the Junta de Andalucía and are considered Historical Heritage of Andalusia; so both the building and the objects it contains must be preserved. Although the palace is still one of the residences of the current Duke of Alba, it is now possible to visit the palace and its gardens on a daily basis and enjoy the family’s impressive private collection. Even night tours have been organised, allowing you to enjoy all the magic of this palace.