This old stronghold in the Sierra de Almijara was the scene of a famous battle during the Rebellion of the Alpujarras. Today it is considered one of the most beautiful villages in Málaga thanks to its characteristic Moorish urban layout.

Plan your stay in Frigiliana

This charming town in the easternmost part of Málaga has extraordinarily preserved its Moorish past. The royal warehouses, the ruins of the Arab castle, the church of San Antonio de Padua or the archaeological museum are its great attractions. Thus, what you see in Frigiliana takes about a day.

An ideal complement to the trip is to go to the beaches of Nerja, just 7 km away. There are also numerous options for enjoying active tourism in Málaga in the Sierras de Tejeda, Almijara and Alhama Natural Park. If you want a more urban plan, Málaga awaits not far away.

Another of the attractions of this municipality is its gastronomy, featuring the famous local Chirimoyas. In the pages about sleeping and eating in Frigiliana you have information about it and different accommodations.

The best thing to do before trying what to see in Frigiliana is to understand its history. The populations go back to the Neolithic. At that time, several communities were established in the vicinity of the Higuerón River. The remains of the Cueva Oscura and the Cueva de los Murciélagos, dating back to 3,000 BC, stand out. At Cerrillo de las Sombras a necropolis was drilled ca. 7th century b.C. where Phoenician urns have been found. On the other hand, the primitive location of the village was in Los Poyos del Molinillo.

The meaning of ‘Frigiliana’

After the Phoenicians would come the Iberians and after them the Romans. The latter gave it its present name, which means “property of Frexinius”. At the beginning of the 5th century the place was destroyed by the Vandals. Later it would be taken over by the Visigoths.

When the Muslim domination took place, from the year 718 it was ascribed to the Cora de Rayya, and the castle was built. The fortress would become part of the uprising of Omar ben Hafsun, who would maintain an independent territory for more than four decades. Due to the position of the defences at the top of the village rock, the place was known as Hins Challana. At that time a silk production centre flourished, as did the cultivation of figs, grapes and olive oil. Around the 13th century it was annexed by the Nazarite kingdom of Granada, which named it Fixmiana.

Like the rest of the area faithful to Boabdil, at that time in war El Zagal, during May 1487 was given to the Catholic Monarchs. However, they did not respect the signed capitulations. Thus, its population was subject to abuses and prohibitions. Progressively, many of them went to live in caves and huts in the countryside. 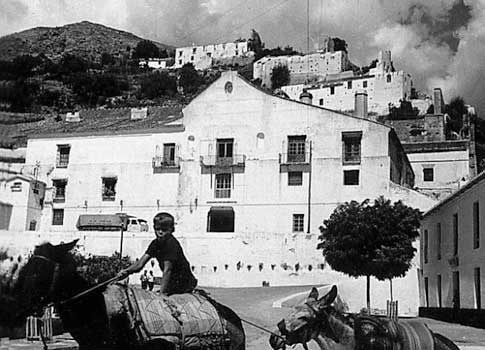 A kid from Frigiliana in front of El Ingenio, Cane Honey Factory, ca. 1960

In 1515 there was a landing of Barbary pirates. With the help of local Moors they plundered the population and kidnapped Castilian settlers. A similar attack occurred years later. Distrust of the Moors increased, culminating in the famous Rebellion of the Alpujarras at Christmas 1568.

The local Moors, led by the so-called Almueden, attacked the stronghold of Canillas de Aceituno. The objective was to rescue the wife of this man, a prisoner of the Christians. Such a siege lasted until June 11, 1569, when an army under the command of Luis de Requesens confronted the Moors. The result was the Battle of the Peñón de Frigiliana. In the following months, the Moorish settlers were sent to Castile and dispersed. To compensate for the depopulation, Christian settlers were brought in. In addition, the Castle was dismantled.

A few years later the town was affected by the plague, which was followed by several years of poor harvests and the consequent famines. As a result, by the seventeenth century Frigiliana was practically depopulated. In order to reactivate the town, Felipe IV segregated the town of Vélez-Málaga. In the process he granted it the category of Villa and created the title of Count of Frigiliana, given to Iñigo Manrique de Lara. In addition to certain economic privileges, the cultivation of sugar cane was introduced. The plan was a complete success.

The famous Cadastre of the Marquis de la Ensenada began, in 1752, precisely in Frigiliana. Such an important document is kept in the town hall of the city. However, during the 19th century several disasters stopped the development of the city. After the Civil War, the Sierra de Almijara would shelter the maquis during their fight against the national-catholic government.

What to see in Frigiliana

Wandering through its Moorish streets, which retain their original structure and essence, is the best that this Málaga village has to offer. Unfortunately, nothing remains of the citadel that was built on the Cerro de la Sabina except for ruins when the fortress was dismantled after the battle of Frigiliana in 1569. A considerable part of its stones were used in the factory of the Manrique de Lara Palace.

Among the main buildings to see in Frigiliana is the Church of San Antonio de Padua. It was founded at the end of the 17th century by the powerful Friar Alonso de Santo Tomás. The friar would come to preside over the Council of Castile during the reign of King Charles II the Bewitched. The coffered ceiling of its interior stands out, where a valuable rococo choir and the famous image of San Antonio de Padua are kept. On the high altar there are some curious figures linked to the Holy Supper. Likewise, a curious staircase closed by a gate anticipates the entrance to the temple. 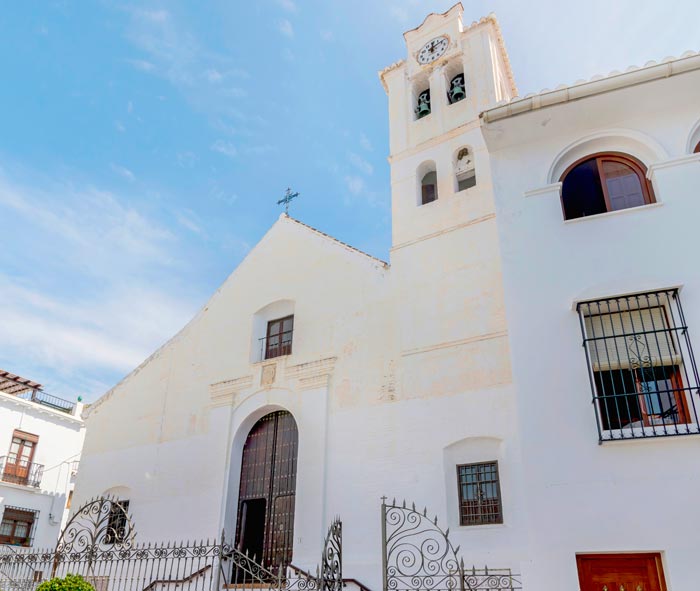 The Hermitage del Santo Cristo de la Caña (17th century), modest, holds a remarkable Ecce Homo. However, the most singular element to see in Frigiliana is El Ingenio. It is a mixture of noble construction and industrial installation. It used to be the Palace of the Manrique de Lara family (16th century), although it was later transformed to house the last European sugar cane honey factory.

Architecture which served for working

Inside, El Ingenio de Frigiliana exhibits a good part of the primitive productive mechanisms. Two large chimneys stand out on the outside of the factory, whose front is decorated with striking paintings and sgraffito. On the other hand, the Manrique de Lara Palace had a chapel dedicated to the Virgen del Carmen. The niche in which she was venerated is still visible.

Another notable landmark that can be seen in Frigiliana is the Reales pósitos (1767), which served to store the grain. A succession of arches on its façade is striking. In addition, the interesting Museo Arqueológico (Archaeological Museum) of the locality is housed in the Apero house. Its collection goes from the distant Prehistory to the Rebellion of the Alpujarras. The building was formerly used as a stable and agricultural warehouse.

Also recommended is a visit to the Fuente Vieja (17th century). It was built by order of Iñigo Manrique de Lara to serve both the population and the animals. Closing what you see in Frigiliana is the Santa Fiora Botanical Garden. Recently, it presents the fundamental plants in the history of Frigiliana. Thus, in it grow esparto grass, sugar cane, palmetto, olive tree and various medicinal plants.