The most beautiful and flamenco Mudejar quarter

At the foot of Sierra Nevada, between the rivers Darro and Genil, lies a jewel with an impressive Andalusian and Renaissance legacy, declared a World Heritage Site. Its surrender in 1492 culminated seven centuries of Christian reconquest of the Peninsula.

Plan your stay in El Albaicín

Declared a World Heritage Site, El Albaicín is a must for anyone discovering the charms of Granada. There is much to see in this quarter. It hides real treasures that will make the traveller want to get lost for hours in its winding and steep streets. The Church of Santa Ana, the Convent of Santa Catalina de Siena or Zafra and the Holy Caves are some of the attractions that we explain in our section What to see in El Albaicín Quarter. Its privileged location means that from here you can enjoy the best views of La Alhambra. You should visit it on your way out (it takes about three hours).

Another activity is to visit the rest of Granada city. One or more days can be spent touring the nearby Sierra de Huetor and the wonderful Sierra Nevada National Park. For those looking for a coastal plan, you can go south on the highway to visit the coastal towns of Salobreña, Motril or the tourist town of Almuñécar. When it comes to choosing where to eat or stay, this enclave has many options to choose from; on our page Sleeping and Eating in El Albaicín we provide a selection of the most charming places. In the evening, it is a must to dine and enjoy the music and dance in one of the tablaos.

The first inhabitants of Granada were the Iberians, around the 7th century B.C., calling it Ilturir surrounded by a wall. In the 4th or 3rd century B.C. it became known as Iliberri and was controlled by the Bastetans and Carthaginians. Some people associate the name of Granada with the terms Garb (temple) and Nata (Carthaginian goddess). The truth is that before the Muslim conquest there was not one city, but three. They would later disappear or merge into the current Granada.

A second city arose around 190 B.C., when it was conquered by the Romans who settled in El Albaicín; in the municipality of Florentinum Iliberritanum. It seems that around the year 62 San Cecilio arrived to the city. He Christianized the population and became its first bishop.

Very little is known about the Visigothic domination, except that it continued to enjoy the importance acquired with the Romans; later it would be abandoned because at the beginning of the 8th century it was depopulated.

Around the year 711, it was inhabited by the Arab invaders who founded the Zirí Kingdom of Granada during the 11th century. Between the 13th and 15th centuries it would be the Nasrid Kingdom of Granada. In 1013 the first of the Zirid monarchs, Zawi ben Ziri, was the founder of the third city: Madinat Garnata, also in the current area of El Albaicín. After a period of Berber control, the Nasrids promoted the growth and development of the town, walled the outskirts of El Albaicín and built the palatine city of La Alhambra. Granada was then organized into six walled districts, connected to each other by gates that were closed at night. This is how it remained until the 16th century.

From Islam to Christianity

The most outstanding episode in Granada’s history took place on January 2, 1492. Boabdil, the last of the Nasrid kings, handed over the keys of the city to the Catholic Monarchs; who then left for exile. Little by little, the following centuries would see the transformation of an Islamic city into a Christian city. The discovery of the Plumb Books in 1595 will lead to the creation of the Sacromonte Abbey; and to the linking of the recently inaugurated Christian history with its most remote past.

What to see in El Albaicín Quarter

In the visit to the last Arab stronghold in the Peninsula we find integrated Arab and Christian elements. The famous Albaicín (or Albayzín) was declared, along with the Alhambra and the Generalife, a World Heritage Site by UNESCO. Its narrow and steep streets give shelter to numerous cármenes (houses with gardens). There are also ancient mosques on which churches and small squares full of charm have been built. Some examples are those of San Nicolás and San Cristóbal; which have become wonderful viewpoints of the Alhambra and the Generalife.

Our itinerary to visit Granada will begin in modern Granada. It somehow has its border with El Albaicín in the Plaza Nueva; where the Zirí (formerly Roman), Nazari and Christian Granada converge. In the square were installed the guilds of craftsmen and celebrated all kinds of shows, including bullfights. Today it is still a lively meeting place. The Real Chancillería (16th century) is from its foundation the seat of the high court of appeal of the ancient kingdoms of Granada and Seville until the 19th century; at present the High Court of Justice of Andalusia.

Its façade, symmetrical and solemn, is the work of Francisco del Castillo. The interior courtyard is attributed to Diego de Siloé. The monumental staircase is also noteworthy. Under it is the so-called Cueva del Verdugo, a place for the executioner of sentences. The Church of Santa Ana (1540-1560), in the square of the same name, was built over a mosque. Its Mudejar tower with mullioned windows stands out. Inside, with a single nave and side chapels, the carvings of San Juan de Dios by José de Mora and a San Jerónimo by José Risueño, among others, are preserved.

From here we access the Albaicin, a labyrinth of narrow streets that go up and down according to the inclination of the land. Ascending by the Carrera del Darro, one of the most singular and represented of Granada, that runs parallel to the river and is full of palaces (like the Casa de Ágreda), we will arrive at El Bañuelo or Arab Baths (Hamman al-Yawza), National Monument. The baths are built with exposed bricks, with beautiful barrel vaults and horseshoe arches on columns with delicate capitals.

The Paseo de los Tristes continues the Carrera del Darro. It is one of the most romantic places in Granada, from which you can enjoy magnificent views of the Alhambra. Through it we can reach the Cordova Palace, current seat of the Provincial Historical Archive, and the Casas del Chapiz, where the School of Arab Studies has been installed. A little further away, on El Sacromonte, we find La Abadía where in 1595, at the beginning of its construction, the famous Plumbeous Books were found, in which the false chronicle of the introduction of Catholicism in Granada by Saint Cecilio is narrated.

The complex, from the 17th to the 18th century, is made up of the Holy Caves, the Abbey, the College of San Dionisio Areopagita and the Seminary. The most interesting part of the complex is precisely the Holy Caves which, dug into the rock and closed in the form of cells, form a labyrinth and end up in the chapel of Santiago, where, according to tradition, the apostle Santiago gave his first mass in Spain. In two of the rooms there are two stones that, according to tradition, covered the relics. One is black and the other white, and it is said that whoever kisses the first one gets married at the end of the year and whoever does it with the second one, being married, finds the end of his marriage. You can also visit the Abbey Museum, where its artistic treasures are kept.

Things to see in every corner

In front of El Bañuelo you can see the remains of the Compuertas Bridge. This bridge linked El Albaicin with La Alhambra. A little further up is the Convent of Santa Catalina de Siena or Zafra (1520-1540). It was founded by Hernando de Zafra, secretary to the Catholic Monarchs. We highlight its main altarpiece (18th century), as well as the images and paintings in the presbytery.

On the other side of Zafra Street is the Casa de Castril, home to the interesting Archaeological Museum. Very close by is the Church of San Juan de los Reyes. In Gothic style, it was completed around 1520 and catalogued in 1883 as a National Monument. Of the mosque, on which it was built, only the minaret remains, to which a body of bells was added.

The nearby San Nicolás Viewpoint is essential. It is a wide esplanade that offers unbeatable views of El Albaicín, La Alhambra and Sierra Nevada. From here we can approach the Church of San Salvador. Its courtyard of the mosque on which it was built is preserved. It has a rectangular floor plan with perimeter galleries; opened by brick horseshoe arches on square pillars of the same material. This temple was one of the two that enjoyed the right of asylum in Granada; in its courtyard were hung the sambenitos of the Moors condemned by the Inquisition. 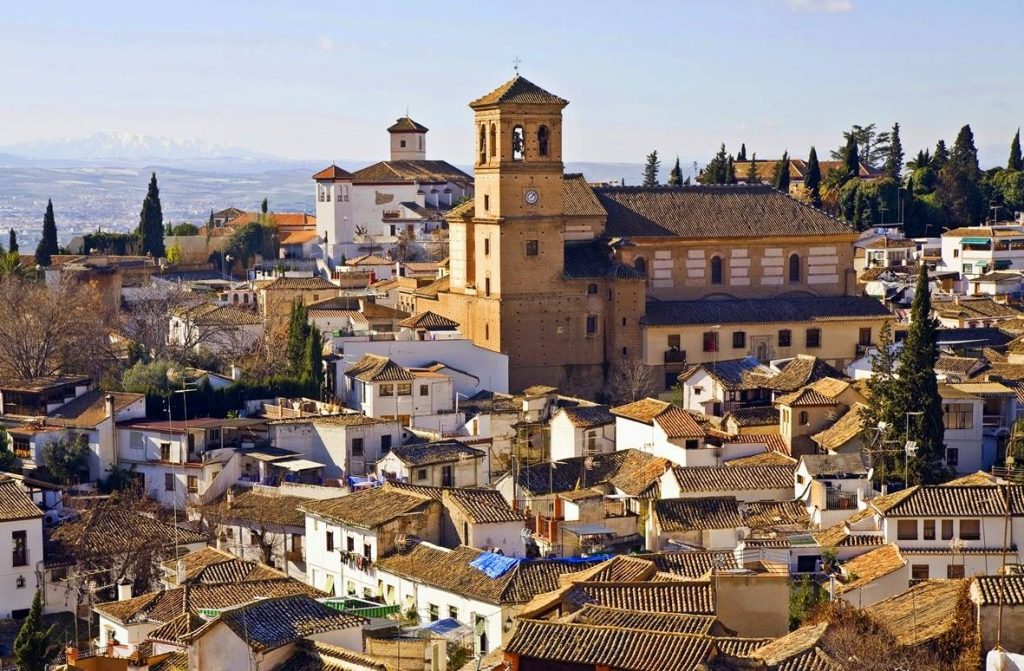 The exit route passes through Panaderos Street, to the Plaza Larga and the Arco de las Pesas, adjacent to the ancient walls of the ninth century; passing in front of the Palace of Dar al-Horra (15th century), to the Monastery of Santa Isabel la Real (1501). Its single-nave church, with a Gothic stone façade and Mudejar tower, preserves beautiful Mudejar armour.

We recommend those who wish to learn more about flamenco to visit a tablao or peña. There they can enjoy authentic live shows.

Likewise, among the different types of ceramics, the one from Fajalauza stands out especially (blue and green on a white background), elaborated in origin in the establishments of Gig-Fagg-Allanz or collado de los Almendros and the Andalusian ceramics, of great geometric balance, stylization of lines and metallic reflections. Carpentry work, especially artistic furniture and carving. Luthiers’ workshops, specialized in the making of guitars and other stringed instruments.

The 11 most impressive glass buildings in Spain, beauty with a fragile look
There are many examples among Spanish architecture in which brick, stone or concrete have been Más información

13 of the most original and spectacular staircases in Spain
Although for some they only serve to go up or down, many believe that stairs Más información