The village that defended its rights

This beautiful set of white houses, with balconies and wrought-iron windows, extends over the hill of its medieval castle. Its popular concept is made up of the defence of their collective rights in the 16th century.

What to see in Vejer is rather the popular, authentic atmosphere of its streets among whitewashed houses. Also of interest are the panoramic views over the rooftops and the surrounding countryside. The walking tour can take up to a whole day.

On the other hand, on the pages about sleeping and eating in Vejer de la Frontera there are good options for accommodation and restaurant choice. Finally, the place is perfect for various activities in the province of Cádiz.

Before trying what to see in Vejer de la Frontera it is best to review its history. It is old because of its position. The land was very easy to defend, on a hill near a river. For that reason, the place was fortified from the Bronze Age. At that time it was called Besaro (7th B.C.). Later, the Romans called it Baessipo, being a relevant population, mentioned by several historians.

From the same year of 711, after the battle of Guadalete river, the Visigoths lost the place in favour of the Muslims commanded by Tariq. At the end of the 9th century, the Mozarabic inhabitants rebelled against the Caliphate of Cordoba. The situation lasted until 895 when the Umayyad prince Motarrif assaulted the fortress.

A village with many names

During the Mohammedan domination it was called Besher. It had a citadel, raised between the houses that were built in a variegated way, shaping the appearance of its streets and squares. Of those five centuries of Muslim control, the castle gate (from the 11th century) and several stretches of wall remain as testimony. Also noteworthy are the decorative elements of the parish church and many private buildings.

In 1250, Ferdinand III of Castile took over the town. However, the treatment of the Mudejars must have been inadequate, as they rose up 14 years later. After two months of rebellion, the Castilians regained control of the town, expelling its inhabitants. For years it was known as the “Véjer de la miel” (Honey Vejer) because of the large number of beehives in the municipality.

It remained as a royalty town until 1285, when Sancho IV ordered its defence and repopulation to the Military Order of Santiago. Between 1288 and 1293 this one carried out a distribution of lands to attract population. In addition, the inhabitants had the right to extensive communal lands. Part of them were raffled off for their enjoyment, or that of their income, by the system of the “hazas de suerte”.

By the 13th and 14th centuries, Vejer de la Frontera was an important bastion against the Benimerines who dominated Algeciras. Also against the Nasrid Kingdom of Granada, so it ended up adding “de la Frontera” to its name. The lordship passed in 1307 to the famous gentleman Guzmán el Bueno. It would remain for a long time in the hands of his descendants, the Dukes of Medina Sidonia.

In 1535 there was a famous, peaceful and unusual social protest against the Duke of Medina Sidonia. This meant high legal and travel expenses for the neighbours. After four years the lawsuits reached the last instance, the Royal Chancery of Granada. Finally, they managed to have their rights recognized.

Later, on 12th April 1773, an earthquake took place in the surroundings of Vejer. It caused serious damage to the village. In the following years multiple demolitions and repairs had to be made to the buildings.

What to see in Vejer de la Frontera

The urban ensemble prevails over the specific monuments of the town. For this reason, it is a good idea to walk through its typical streets randomly. The houses are whitewashed, with balconies and grilles made of wrought iron.

A town with many accesses

The town was protected from the Arab period by the walled perimeter that protected the original nucleus. From the defences important constructions remain. All of them can be seen while walking towards the high part of the town. The accesses that you can see in Vejer de la Frontera are the Arco de la Villa, the Arco de la Puerta Cerrada and the Arco de Sancho IV. As far as bastions are concerned, there are the Baluarte de la Segur and the Bastion del Mayorazgo. 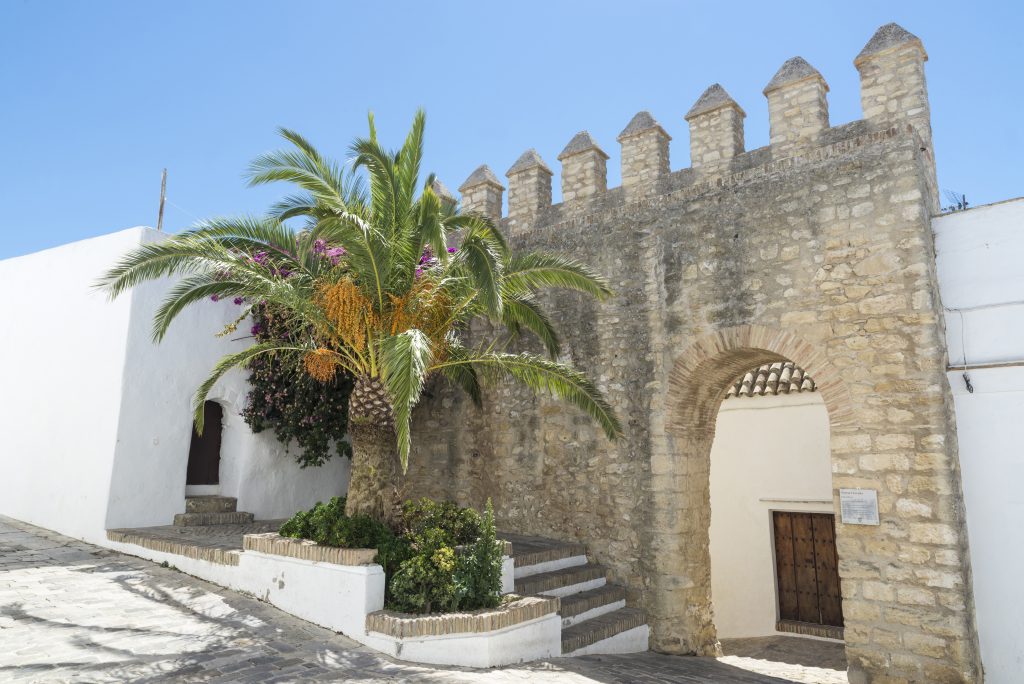 A church with many details

The main religious building to see in Vejer de la Frontera is the Parish Church of Divino Salvador (14th-16th and 17th centuries). Initiated in Gothic-Mudejar, it was later extended. The church stands on the site of an old mosque, some of whose materials were used in the construction. For its part, the interior decoration includes numerous Mudejar works. The vault of the main nave, in which its ribs are sculpted in a saw tooth form, is striking. The main altarpiece (17th century), made of cedar wood, also deserves attention.

As usual, the Castle of Vejer de la Frontera is in the highest part of the town. Its origin dates back to the period of the Caliphate (10th century), and it was reformed in later centuries. It still preserves its double door with some floral motifs (12th century), as well as the walls and the parade ground. The duchy of Medina Sidonia would use it as a residence, embellishing it in the 18th century.

A beautiful Renaissance façade distinguishes the Convent of Las Monjas Concepcionistas (16th century), located next to the Arco de las Monjas. It also conserves a curious succession of buttresses placed as a result of the earthquake of 1773. 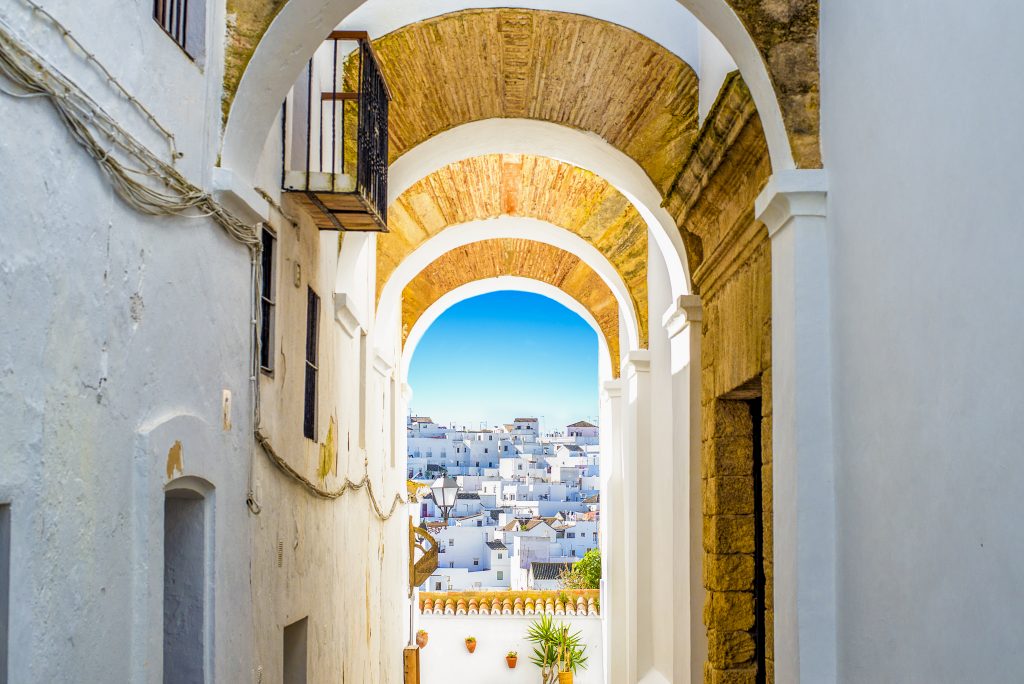 Arco de las Monjas next to the Convent

Among the main houses to see in Vejer de la Frontera is the Casa del Mayorazgo (18th century). It has two courtyards and is closely related to the city wall. Following it is the turn of the Palace of the Marquis of Tamarón (17th-18th century), current headquarters of the Casa de la Cultura.

The Vejer de la Frontera from the past

In the Santa Lucía district you can still see some of the 19th century flour mills. These are elements with which the town used to identify itself in the past. The one that belonged to the Dukes of Medina Sidonia stands out from the rest. Nearby is the Santa Lucía Aqueduct, of Roman origin and later perfected by the Arabs.

Concluding with what to see in Vejer de la Frontera, it is time to move to the Montenmedio urbanization. The place includes an interesting Museum of contemporary art NMAC Foundation. Located in a natural environment, it takes advantage of the facilities of an old airfield. It is worth spending a couple of hours to visit it. Nearby is the Sanctuary of the Virgen de la Oliva, patron saint of this town in Cadiz. First a Roman villa, then a Visigothic basilica. Today a carving of the Virgin from 1596 is venerated there.

Vejer de la Frontera has a beach only 9 km from the town centre known as “Playa de El Palmar“. Located on Costa de la Luz, on a long and open strip of the Atlantic Ocean, and is submerged in the ocean at the ends of Trafalgar and Roche. Its fine sands and transparent waters surrounded by a natural environment have contributed to making this beach one of the few virgin beaches in the area.

This beach is ideal for water and sailing sports, such as surfing, wind-surfing, water skiing, fishing, etc., which are practiced all year round. On this beach there is a tower, called Torrenueva, whose function was to watch over the coast. This type of tower was widely used during the 17th and 18th centuries, being placed along the whole coast of Cadiz, characterizing the surveillance as it was very likely the invasion of pirates and bandits. 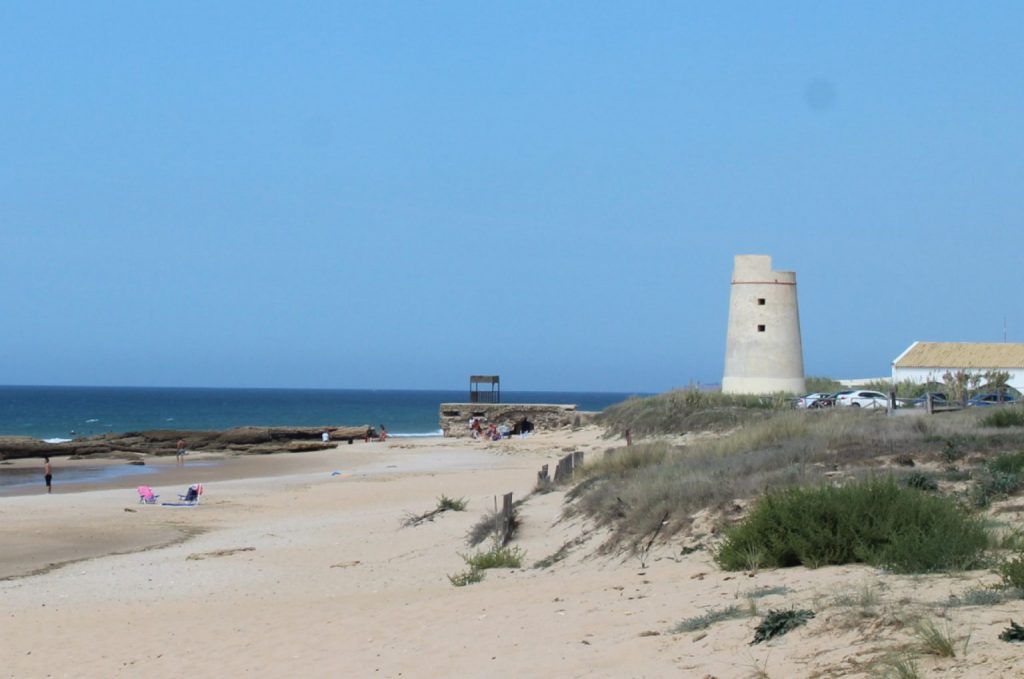 It is advisable to leave the car in the Parking La Corredera (near the old town) or in the Parking Los Remedios (at the entrance of the town). There is an area set up behind the tourist office.

Carnival, Holy Week, Pilgrimage on May 7 (Virgen de la Oliva, patron saint of Véjer), Candela de San Juan (June 23), Toro Embolao and Evening in honor of the Patron Saint of Véjer, the Virgin of the Olive (August 10 to 24.