A sleepless giant that draws the path between the sky and the ocean. Something has the lighthouse of Chipiona that dazzles. That makes the visitor fall in love. That leaves an indelible picture in their eyes. It is not for less. Under the watch hides the highest lighthouse in Spain and the fifth in the world. Not only that, but the landscape surrounding could not be better. 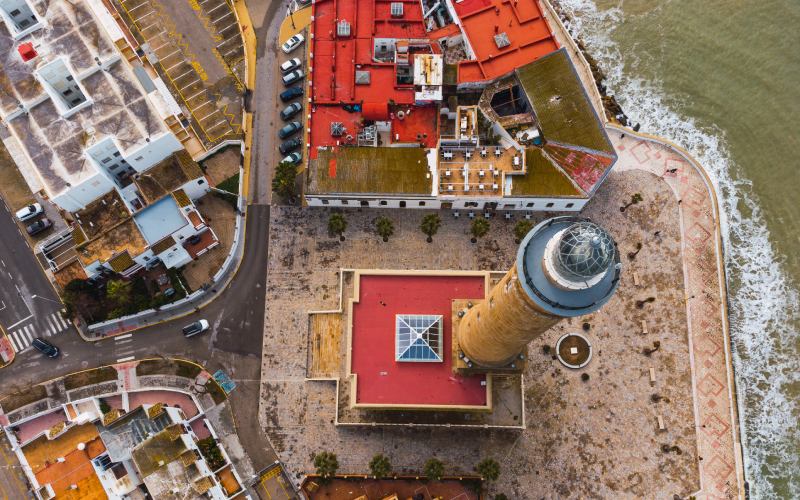 The lighthouse from the heights | Shutterstock

Located in the picturesque town of Chipiona, this lighthouse has seen the growth of generations of fishermen, soldiers, artists of the copla, artisans, night strollers and children who played in its surroundings. Its commissioning was a relief for boats wishing to cross the rocky bottoms of the Guadalquivir. Even today it serves as a guide for the airplanes that fly over the area. From its lantern the intense blue of the Atlantic, the riverbed and the warm face of Huelva can be seen.

The history of the Chipiona lighthouse begins like all stories, with a premise. In this case, that of guiding the path of ships entering the mouth of the Guadalquivir River, formerly known as the Betis River. In 1847, under the reign of Isabel II, the Plan de Alumbrado Marítimo (Maritime Lighting Plan) was carried out under the leadership of Prime Minister O’Donell in order to shed light on the Spanish coasts. Thus, in 1863 the first stone was laid to inaugurate the 69 meters high tower. 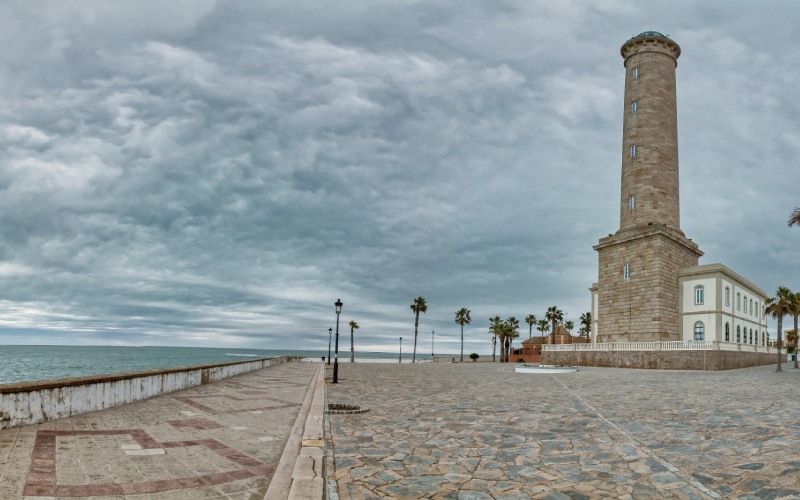 The design was in charge of the architect Jaime Font during the four years that the work lasted. Although it was initially built with maritime traffic in mind, air traffic gradually gained prominence. In fact, thanks to the great reach of its light, the U.S. government financed the glazing of the roof so that its military aircraft would have a guide in the sky. From that moment on, it became one of the 20 aeromaritime lighthouses in Spain.

Let there be darkness

According to some historians, the Chipiona lighthouse has only been turned off twice since its inauguration in 1867. The first one took place during the war against the United States for the independence of Cuba. The place was turned off because of a possible invasion of the Cádiz coast. The second time was at the beginning of the Spanish Civil War and its blackout lasted three years.

On the way to the Chipiona lighthouse

If you visit the town of Chipiona you will be surprised by three things. The first is the charm of the white houses next to the beach. The second, for the majesty of its cathedral and its restored castle. And the third, for housing an elegant stone giant that does not go unnoticed by any of its angles. The access to the lighthouse of Chipiona is very simple. It is enough to enjoy a pleasant walk through the port to find it. Among the fishermen’s corrals, the vibrant ocean waves and the tapas bars stands the jewel in the crown, and never better said.

The secrets of the Chipiona lighthouse

Visiting the Chipiona lighthouse is one of those must-do experiences that you have to do at least once in your life. Arranging the tour is easy. Just go to the Tourist Office of Chipiona, located in the castle, and choose the schedule that best suits the preferences of each one. Once inside, things change. 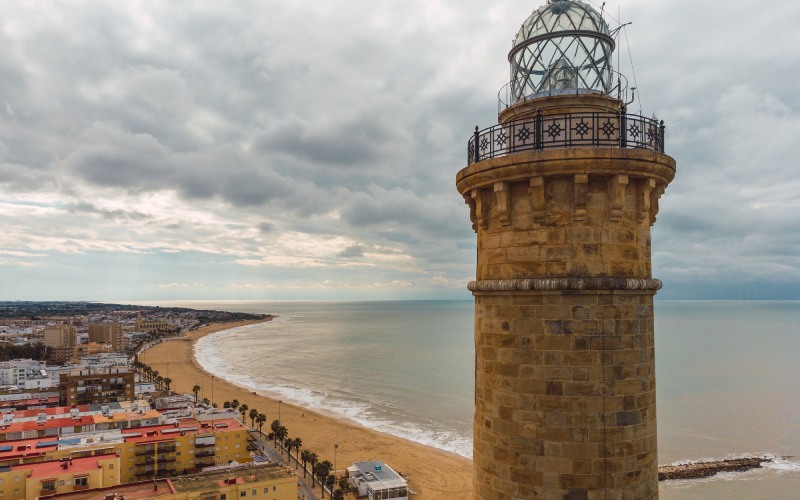 View from the lighthouse | Shutterstock

A small cream-colored cloister welcomes the visitor. On its walls you can see small maps and posters explaining how maritime signaling works. A curious fact about this first room is that it has four large planters that were donated by Queen Elizabeth II during its construction. On the upper floor you can access the lighthouse keeper’s house.

Here comes the really interesting part. The ascent to the tower where the lantern is located requires a certain kind of bravery. An imposing spiral staircase of no less than 344 steps leads to the last nook and cranny of this architectural marvel. On the way up there are some windows that become the best excuse to take a short break while the landscape becomes more and more panoramic. Once in the dome, the views are truly spectacular. The small town of Chipiona is combined with the calm waters of the Atlantic and the distant lands of Huelva. 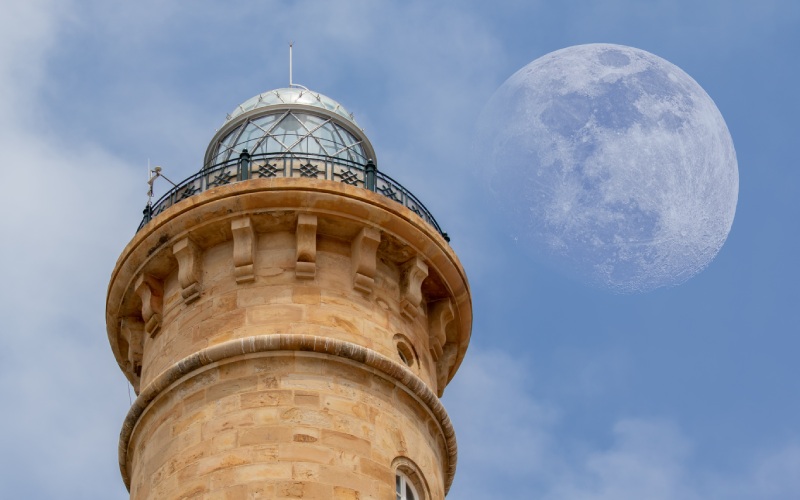 The 344 steps go a long way. One of the most famous curiosities of the monument is its traditional lantern climbing competitions. Yes. Like this. Without preamble. The Vertical Race Chipiona Lighthouse is organized annually and consists of 40 teams of four people competing up and down the stairs of the watchtower and running 450 meters smooth at the end of the descent. A traditional sport, to say the least, curious.

The pearl of Chipiona

That the lighthouse has an unbeatable location was known. But that it is located in one of those Andalusian villages that contain all the essence of the community is something that, when discovered, is a real gift. Chipiona is known for its fishermen’s corrals, small natural pools that serve as bait for some of the marine species of the area. In fact, the affable character of its people makes it very easy to accompany the fishermen in their work and learn about this traditional activity. 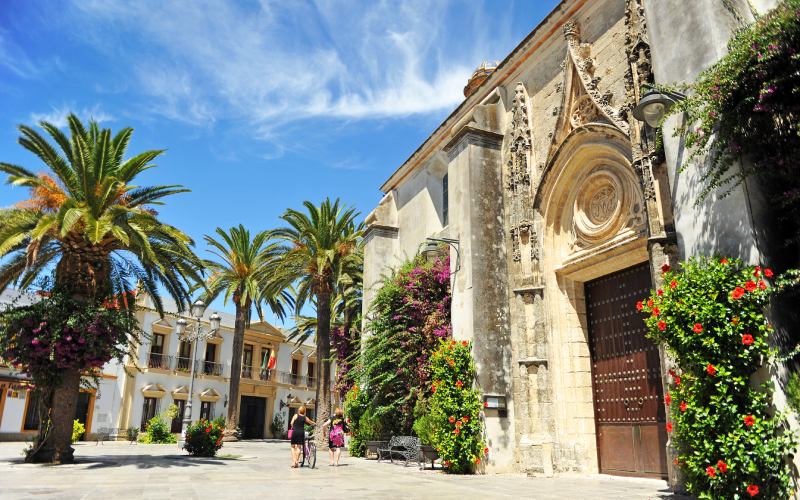 Door of the cathedral | Shutterstock

Other essential jewels to visit are the imposing castle of Chipiona, converted into a hotel, the cathedral of Nuestra Señora de Regla, the monastery and the picturesque squares of the old town where a glass of muscatel and tapas seasoned with local products are a must. A real pleasure for the senses.

The magic of the Andalusian coast 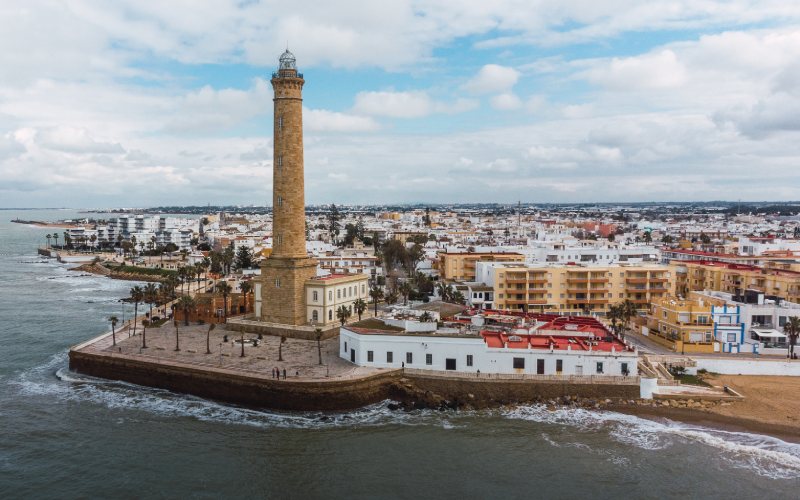 Chipiona from the sea | Shutterstock

Very close to this picturesque village are located others that are well worth a visit. Like Rota, Sanlucar de Barrameda and Puerto de Santa Maria. Less than an hour’s drive away is the wonderful city of Cadiz, considered the oldest city in the West. As for beaches near Chipiona, the Tres Piedras, Las Canteras and Montijo beaches stand out. Endless sandy beaches where a rest after climbing 344 steps is more than deserved.