The province of Almería is one of the regions that can surprise anyone who visits it. It amazes with more than 200 km of beaches, the great desert of Europe, one of the most fertile orchards of the continent and villages with a lot of charm and history.

Known for being home to one of the areas with the highest concentration of greenhouses in the world, so much so that when seen from the air it is reminiscent of a sea of whitish tones that blends with the whitewashed walls of its villages. It also became popular in the 50’s thanks to western movies. It is a popular province because of its peaceful beaches, the blue of its waters and its gastronomy.

Therefore, it is a province where the diversity of landscapes, history, culture and gastronomy coexist hand in hand and have created villages with a lot of charm. Here we review the latter: some of the most beautiful villages of Almería. 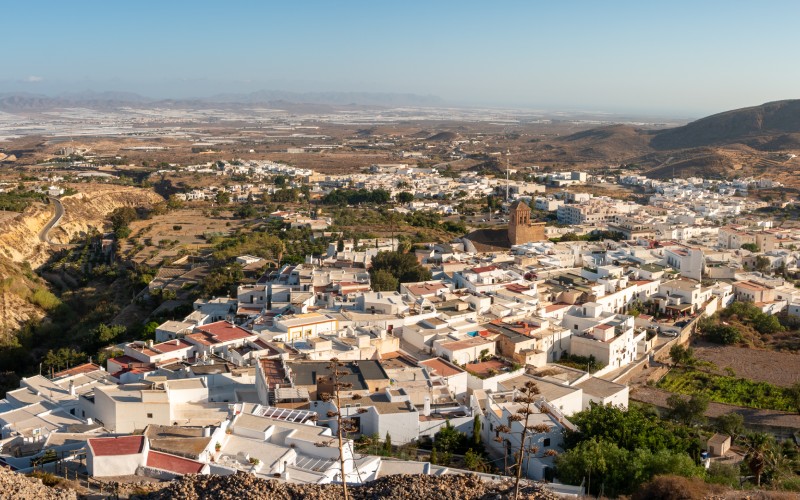 It is a beautiful Almerian village of white houses, labyrinthine streets full of flowers and a lot of pottery tradition. Its past dates back to the Paleolithic and its attractions include the historic center, with a visit to the neighborhoods of Portillo and Atalaya, the church of Santa Maria de la Annunciation and the wide variety of crafts that are created and sold in the population. It is guarded by the Sierra de Alhamilla and from its surroundings there are many hiking trails for all levels. 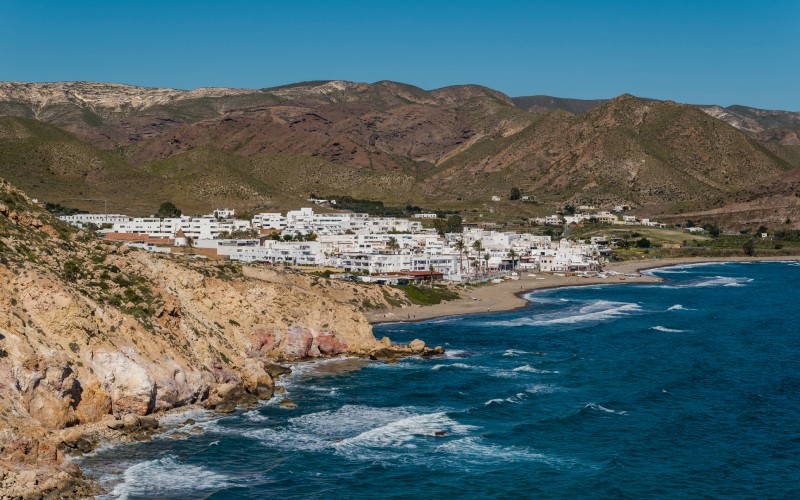 It is a small fishing village of no more than 360 inhabitants. Its name refers to the Cerro Negro, a mountain that is located right next to the village and is located within the Natural Park of Cabo de Gata-Níjar.

Thanks to its privileged location, it boasts calm waters and beaches that preserve their origins with very few buildings around. Among the most popular places to visit are strolling along the main street, having a tapa in the beach bars on the seafront and bathing in the nearby San Pedro cove. 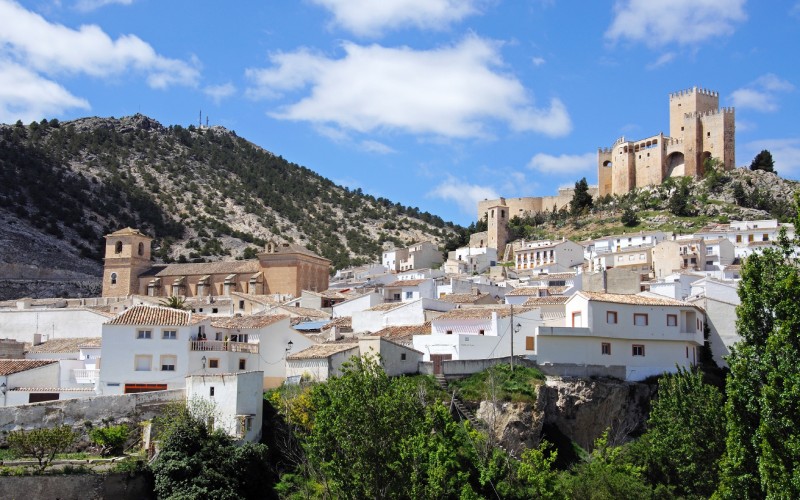 It is one of the jewels of Almería and one of the most spectacular villages in the region. It has been declared a Historic-Artistic Site and Andalusian Cultural Interest. Its extensive heritage makes it necessary to spend at least two days to get to know it.

Among the essential is to visit the castle of Velez-Blanco and the caves of Los Letreros, a World Heritage Site where some of the most important cave paintings of the peninsula are preserved. For these two reasons alone it would take more than a day to get to know Velez and its surroundings. In the region of Los Velez is also the natural park of Sierra Maria-Los Velez, with one of the most lush forests and several options for hiking. 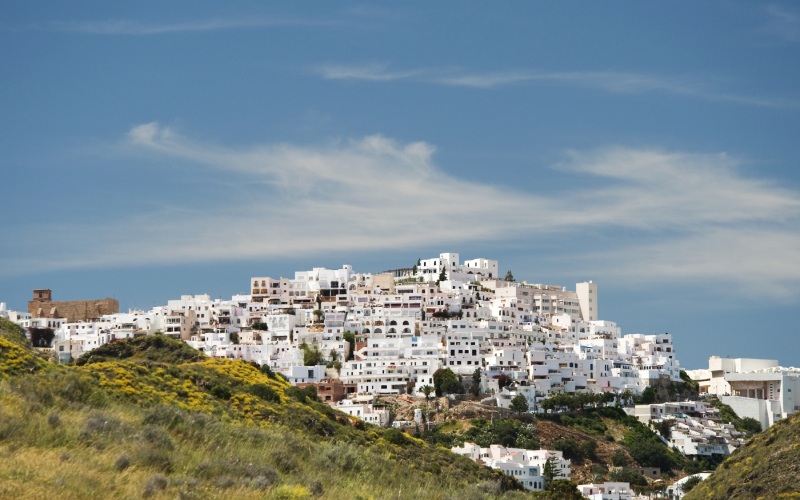 It is an oasis located between the sea, the mountains and the surroundings of the Natural Park of Cabo de Gata. Its white houses can be seen long before reaching the town as they are at an altitude of over 150 meters, leaving much of the population in sight.

When observing part of Mojácar from the road, one gets an idea of what the town could be like, but the truth is that it leaves everyone who visits it surprised from the first minute. Among the must-sees highlights entering the old town, know the Plaza del Parterre, ancient Arab necropolis, and visit the church of Santa Maria, built on an ancient Moorish mosque.

You cannot leave Mojácar without visiting its beaches. With several kilometers of coastline around, there are several paradisiacal beaches, such as Playa el Sombrerico or the long Playa de la Marina de la Torre. 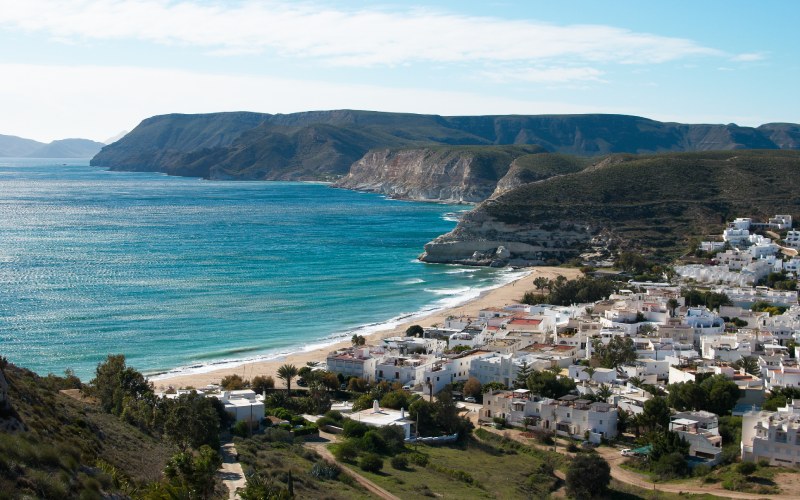 View of Agua Amarga, an oasis of peace. | Shutterstock

Small village of low houses and fishing tradition located within the Natural Park of Cabo de Gata. It is surrounded by fascinating beaches perfect for relaxing and disconnecting as the isolated Playa de los Muertos or Playa Cala de Enmedio.

It is a haven of peace surrounded by greenery but with the necessary amenities to enjoy a few well-deserved days off. Its history dates back to the Nasrid period and has as a neighbor the Mesa de Roldán lighthouse, one of the best points from which to watch the coast of Almería. 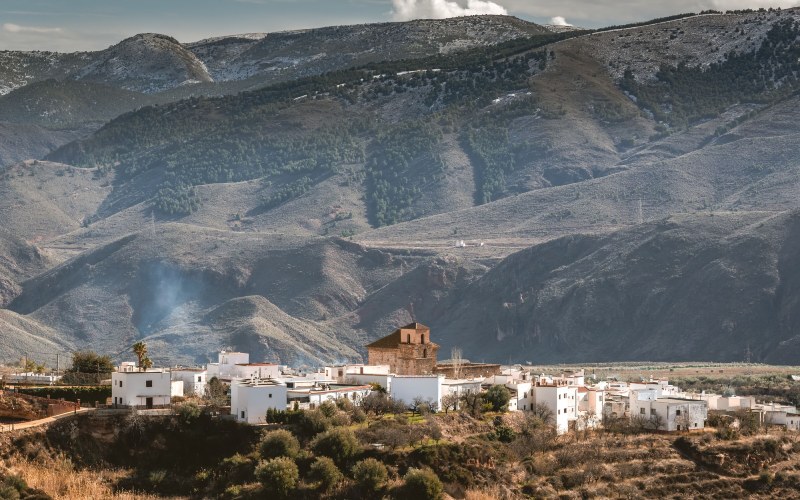 It is known for being a beautiful village in the Alpujarra area that is committed to the environment and culture. Although its population does not reach 200 inhabitants, it is full of life and has become a perfect destination for art and writing lovers.

It was founded by the descendants of Tubal and in its urban center still remains the Arab essence and Moorish architecture. It is said to safeguard the best preserved Moorish architecture in the province as well as several poems and murals that are written on the walls of the village. 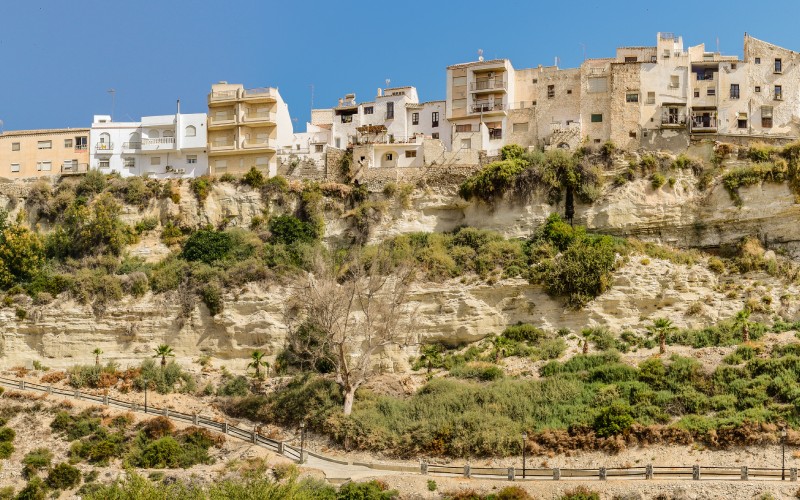 One of the most beautiful villages in the province of Almería. It became popular not only for the hanging houses that hang on the edge of the ravine, but for everything that hides inside. We are talking about the caves of Sorbas, the largest subway system in Spain.

This system includes more than 1000 cavities carved into the gypsum rock that can be visited thanks to several hiking routes and speleological itineraries. It is a subway world that has been declared a Protected Natural Site. But that is not all. Another must stop in the town is to get to know its pottery history and the ceramic workshops where the popular pitchers have been made since ancient times. 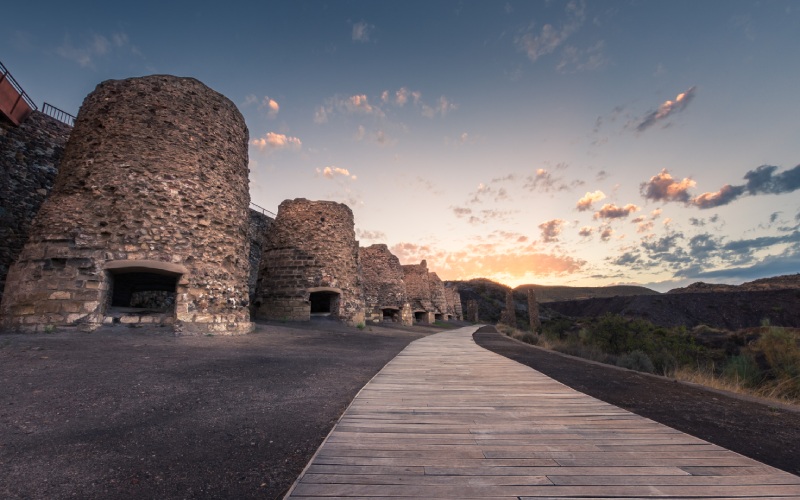 It rose to fame by being considered one of the most beautiful villages of Almería and Spain. Both locals and visitors strive to keep it that way. It is striking how clean its streets are, the amount of flowers that dress them and the donkeys, which are in danger of extinction.

Lucainena has a mining past and proof of this are the calcination furnaces and the Vía Verde. In the furnaces the iron carbonates were calcined before its commercialization, while the Vía Verde recalls the transport of the mineral to the town of Agua Amarga. Today, the Vía Verde connects Lucainena with the surrounding area and is a space reserved for enjoying nature and practicing outdoor sports. 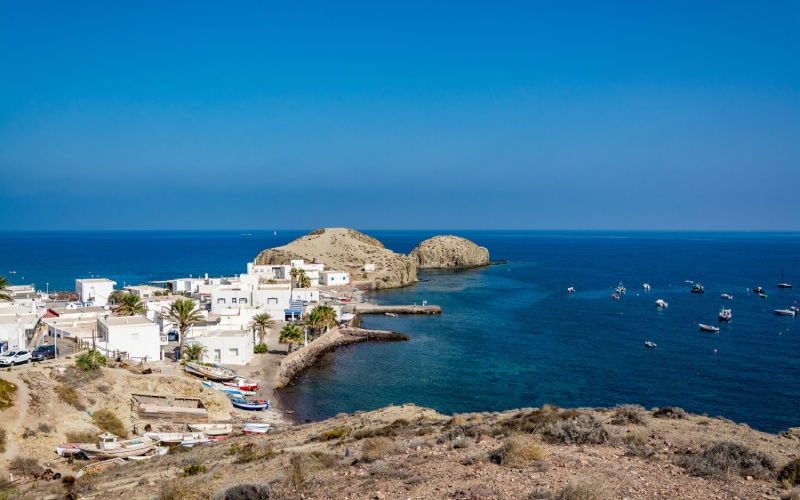 Views of the picturesque village of Isleta del Moro. | Shutterstock

One of the most unique corners and with more personality of Cabo de Gata. It is visited by tourists but also by many people from Almería who cannot resist its charm, the curious volcanic formations that surround it and the beaches with crystal clear water. It is a good starting point to know the Natural Park and the rest of the Andalusian islands, to practice snorkeling or even scuba diving in what is a protected maritime-terrestrial space. Also, it is a strategic point for lovers of beaches or even hiking, as there begin several routes such as the Sendero los Escullos or Sendero Requena. 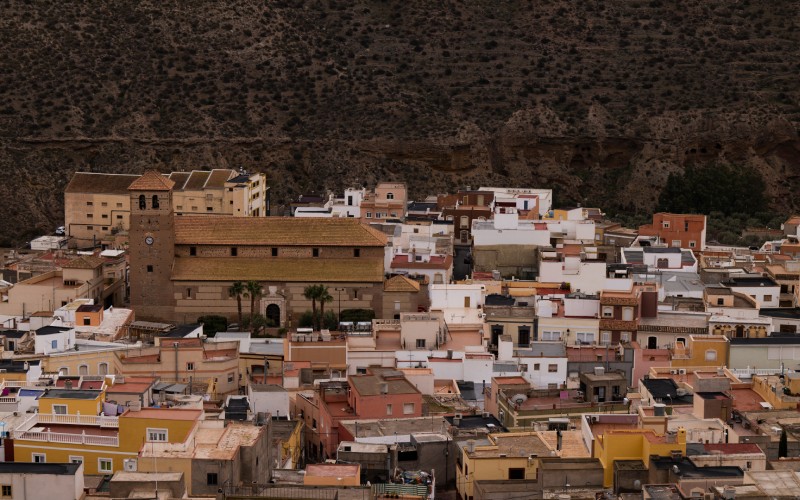 Aerial view of the small town of Tabernas. | Shutterstock

Located in the great desert of Europe, the small town of Tabernas is born from among the eroded hills and sandstone. Its name comes from the Latin ‘tabernae’, which means store, since years ago it was the place where the Romans supplied the troops. Among its attractions are the parish church of Nuestra Señora de la Encarnación, the castle of Tabernas and the old town. It is a destination that can not miss on the list of western movie lovers. Just 8 minutes away by car there are several of the sets that were used in the 50’s, such as Fort Bravo or Oasys Mini Hollywood. In the vicinity of Fort Bravo, you can get to see a copy of the mythical Hollywood letters. 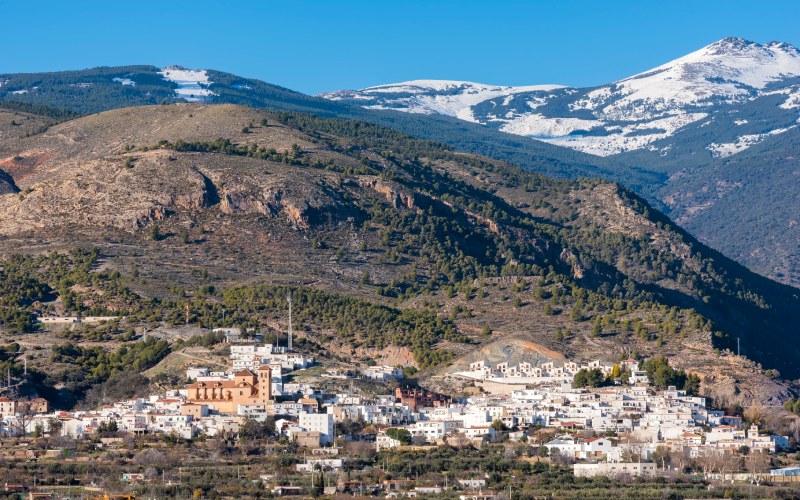 Laujar and the Alpujarra of Almería . | Shutterstock

One of the most beautiful villages of Almería but perhaps also one of the most unknown. It is located in the region of La Alpujarra Almeriense and is located in the foothills of the Sierra Nevada National Park, very close to the border with the province of Granada. It was home to the last king of Granada and the scene of struggles and fights between Christians and Muslims. As a curiosity: it has a total of 16 fountains, some dating from the thirteenth century. These fountains are distributed throughout the town, creating the well-known route of Los Pilares, a different and original way to get to know the town.