The cycles are clear in the Serranía de Guadalajara, especially as it is cornered against the provinces of Segovia and Madrid. The great natural barrier that is the Sierra de Ayllón provides sustenance to victims ideal for professional cameras or mobile phones. At one of the peak moments of the eternal natural return, autumn, the already ochre oak and beech leaves magnify the darkness of the slate. But it is not only the trees that are cyclical in this remote corner of central Spain. There are also some towns and villages. Umbralejo, in spite of being one of the Revenant Villages, is neither alive nor dead. It seemed perennial but turned out to be outdated. And when it reappeared, it was mutated. 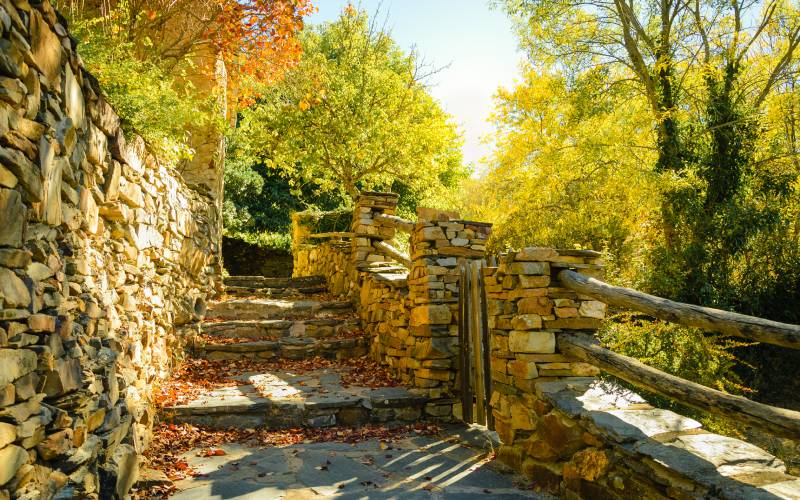 Summer, the hardness of continuous isolation

Summer seems like it will never end. It comes after the revival and the days are so long that they do not seem to end. A trap, as each day is shortened somewhat. This is what happened to Umbralejo. At more than 1,200 metres above sea level, life goes by at a different pace than at lower levels. Being mountainous meant that this population was always isolated. Hidden, like others of their peers, this condition survived from the Middle Ages to the last century. 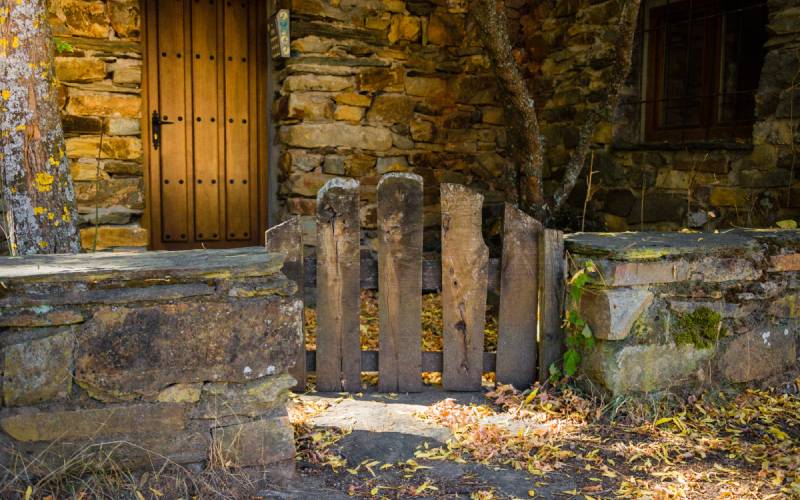 Back in the 90s, the announcement in which a fellow countryman from another black town, Jesús de Majaelrayo, asked if Madrid was once again European champion represented a rather harsh truth. It did not matter if it was in a humorous way. Being away from large centres, between peaks that rise to over 2,000 metres, made the harshness a continuum. In spite of this, jobs such as goatherd or farmer made it viable to survive.

Over the centuries, when life was hard but it was in Umbralejo, the houses were a reflection of the region. Slate next to mud, as always in the Black Villages, was what the houses, churches and fountains were made of. Such material made the land itself hard. There was only room for vegetables by the rivers. The rest was for grain and never too much. Holm oaks, rockroses and oaks, according to the profile of the land, filled in the gaps between villages when deep canyons did not. It did not matter when it was, until recently this was the case in this town, Valverde de los Arroyos or Campillo de Ranas. The beauty, which was already there, would only be seen in the future, changed.

The Ocejón has always looked at black architecture. Immutable, quite naked, today it is crowned daily by the people of Guadalajara. Its heights have always been a nuisance when it comes to moving. If not, just look at how complicated it is now to go from Majaelrayo to Valverde de los Arroyos. A few kilometres, a long journey. If communications are not ideal, which they are, in the 21st century, it is enough to imagine it decades ago. Centuries ago. When horse or foot were the means.

The lack of an alternative ceased to be an option for young people in the 20th century and migration became present. Faustino Calderón, an expert in abandoned villages, explains that they went to areas near Guadalajara, such as Azuqueca, and Madrid. A fate that reached the rest of the Serranía, the Alcarria or the Señorío de Molina. The province has known what depopulation is for too long. Thus, the number of neighbours thinned out until they were starving. 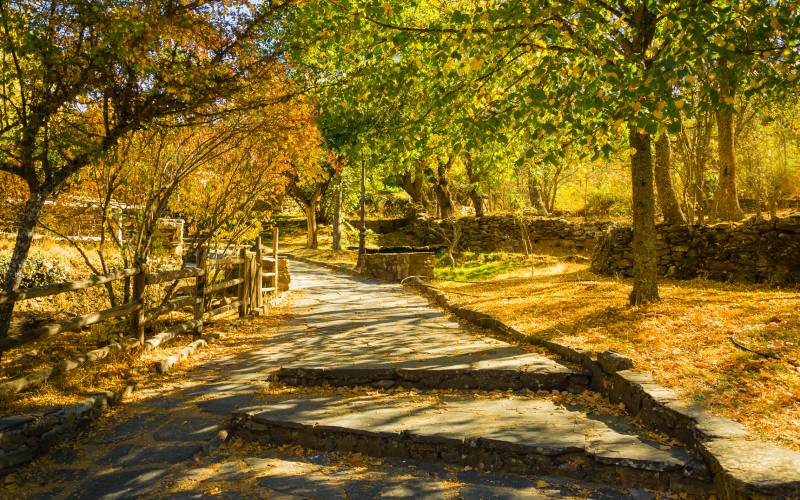 The charcoal and lumber business, this last asset as anyone who wants to climb the Pico del Lobo can see, emptied a good part of the mountains of the Sierra de Ayllón of beech and oak. Romantizing this environment is only easy from a distance. Every merciless winter, every emigrant, emptied the territory on both sides of the Ocejón a little more. Umbralejo fell on the side of Valverde. In the middle of the last century the outcome was clear. There is no need to wait for the snow to fall to know that it will.

Winter, death in black and white

Winter caught Umbralejo being just a shadow of the past. In the seventies most of them had left and they did not want to come back. So far away was this black town that basic services were still a matter of fiction. In this case, it was the Institute for the Conservation of Nature, ICONA, that gave the tip. Responsible for the fact that pine forests are so common in so many places today, they saw in this place of Guadalajara an opportunity to reforest. 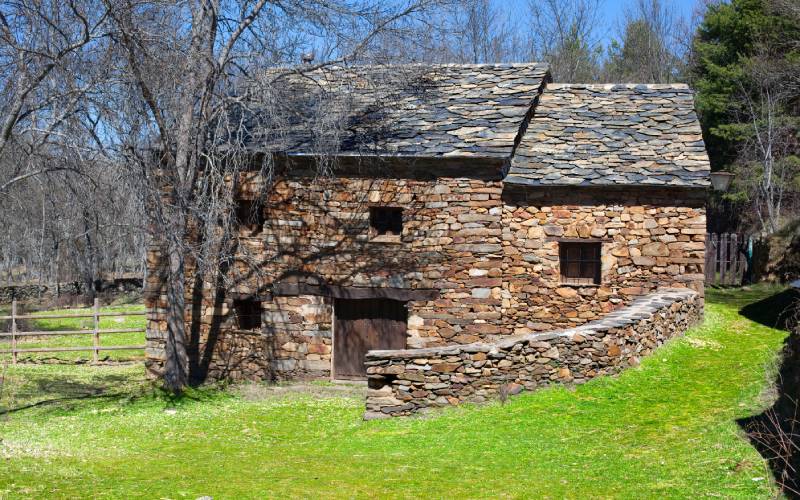 Starting from the surroundings, when they saw the possibility of buying the whole village they did not hesitate. Death came softly, expected. There would be no more festivals in September for the Nativity, like those that the locals remembered Faustino Calderón. One of them, coincidentally called Faustina, told him that “one year it was his turn to be a butler” and to take charge of the preparations together with a waiter. There were no goats left and no coming and going at the fountain. Nothing. Not that it was common, but it was dramatic, especially when we saw how the rest of the territory would evolve.

At that time, black architecture continued to be what it had always been. No tourism or posing. Simply a cheap way of building, almost miserable, made to the earth. The same thing caused the buildings to fall down without sufficient care. Any walk among the Black Villages makes this clear in the form of village corpses. Umbralejo was on the way to it. But, fortunately or unfortunately, its last season would not be the harsh winter of the Sierra Norte.

The Davies brothers sang at Village Green, among other things, how tourists passed through this communal space in the English countryside long after the protagonist of the song had left the village “in search of fortune”. He remembers, nostalgically, wanting to return, but he can’t. In Umbralejo the same thing happens. There are no longer shepherds or roasting goats, nor are there any neighbours. There are children striving, under the guidance of their teachers, to give the village splendour. There are also visitors who are left with their mouths hanging open in front of a bucolic spectacle. It left the autumn as an oak and saw the spring as a beech tree.

Luis Cano, coordinator of the Programme for the Recovery and Educational Use of Abandoned Villages (PRUEPA), is the voice of what has been happening here since 1984. He points out that “very different jobs are being done […], they can go from being bricklayers to maintaining the common areas or carrying out ecological agriculture, there is a lot of diversity and every day they get one”. He adds that there are tasks of cultural recuperation carried out from “forge” to “beekeeping”. All with an extraordinary antiquity and continuity. The objective is to educate, not to “repopulate”, Cano points out.

CENEAM is coordinating a project that has already been mentioned in the case of other Revenant Villages, such as Granadilla. Búbal passed into the hands of the Government of Aragón, although in theory it was also on the list of three. Under ministerial auspices, despite the variances in these institutions, Umbralejo has seen a good part of its buildings reconstructed. However, as Faustino Calderón points out, the current face has little to do with the original. It is another village, another image. Not far away, he points out that La Vereda does show itself as it was. In any case, it is a much better alternative than mere ruin.

Its untouched appearance is a kind of non-death for this unpopulated area of the municipality of La Huerce. What is undeniable is that it has resurfaced. It will have no neighbours, but when there are no pandemics in between thousands of kids every year go on with their magnificent tune-up and live a lifestyle far removed from the contemporary one. Like an echo it survives, one in which its former inhabitants are “strangers in their own village”, in the words of Faustino Calderón. Luckily, he shares Umbralejo with his two brothers in Cáceres or Huesca. Very different from the following Revenant Villages, from Jánovas to Lanuza or Tronceda, where repopulation is the objective.

Umbralejo has lived centuries showing that it is hard. Year after year, cycle after cycle, season after season it endured invasions of misery until it almost reached a present time. A character that has been consolidated by going off on a tangent. An eternal return that broke down, but that has only meant the beginning of a cyclical alternative.

The Caves of Ortigosa: walking among stalactites, stalagmites and giant columns
The caves of Ortigosa de Cameros are the only caves adapted for tourist visits in Más información