The sun rises and the light looks different, strange. A sepia filter has covered the streets. The ground, the cars, everything is covered with sand and there are even those who think it is the apocalypse. But no, what is happening is much less dramatic. It is the calima, or sand haze, a meteorological phenomenon that, despite leaving postcards that look like the end of days, has a much more boring explanation.

Particles in the air

Calima or sand haze occurs when small, dry, solid particles are suspended in the air. This is a common phenomenon, but in this case particles are such, that they dull the atmosphere. In addition,  humidity must be less than 70%, there must be dryness. A cloudy feeling that leaves an ocher, orange, crepuscular light. 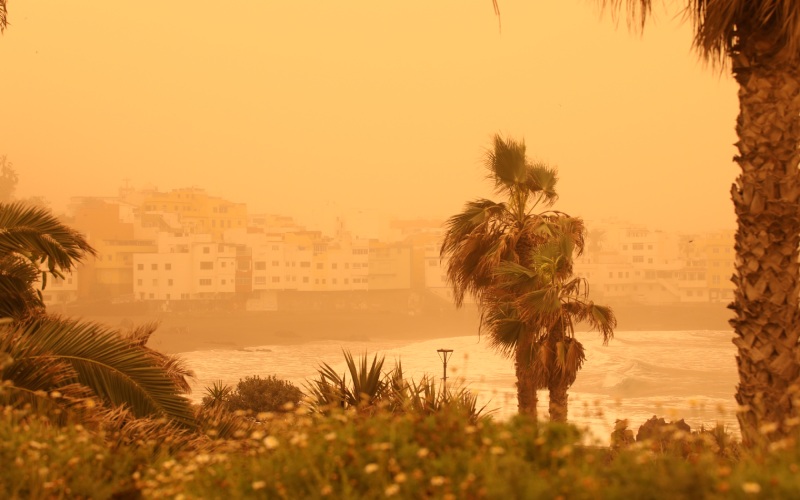 The type of particles changes greatly, although the most famous sand storms are those formed because of the Sahara desert. This huge African desert is obviously full of sand. When the wind picks up this dust and moves it, the show is on. For example, if the Sirocco currents move, the Canary Islands, especially Fuerteventura and Lanzarote, will be covered by sand. In the peninsula it is also usual to see this picture, although less when you go north, of course.

Fires, due to the ash in suspension, are other generators of haze. Also pollution, famous in Madrid and Barcelona, or sea salts. The fact is that, beyond pretty pictures, this meteorological phenomenon is quite harmful. For those who have respiratory conditions, for example, it makes life impossible. If it is very severe, it can even affect air traffic or lead the authorities to recommend not leaving the house. On the other hand, combined with rains, it creates mud showers that make everything look like a real mess.

Those who know some Arabic might think that the etymology of this phenomenon comes from this language. After all, it has the term Kalima, which means ‘word’. But no. ‘Calima’ comes from Latin, from caligo or caliginis. With it, the Romans referred to mist or dense smoke that generated a dark and dull atmosphere. As can be seen, it still represents what can be seen today. These terms derived in ‘calina’, which in turn mutated into ‘calima’.

arabic, Canary Islands, cities, desert
It may interest you...