To understand this story, we must first imagine a classroom set up for teaching, at the beginning of the 16th century. One overflowing with young people, because at this time university teaching was just beginning to become popular. Perhaps among those young people there was a young girl too, belonging to some influential family. She would look sideways at her classmates, who would surely doubt her abilities. This young woman, however, would surely sit near the blackboard, because she wants to learn.

That last part is just a “maybe“. More than likely, there were no women in that classroom. At least, until she came in. You have to imagine her young too, perhaps with a hint of pride in her eyes. She approaches the entrance in good spirits and stands in front of those boys, who watch her silently, guessing, not without some strangeness, that she will sit among them. Again, surely doubting her abilities.

But this woman does not sit down. She stands in front of everyone. She carries a book in her hand and holds those looks, because she’s going to have to familiarize herself with them. They are going to spend some time together. Because they are at a point close to 1508, that classroom belongs to the University of Salamanca, that woman is Luisa de Medrano and she is preparing to give her first class. To go down in history, and not in any way but, as the first female professor in Spain.

“Acclaimed parents who begot such a daughter!”

Of Luisa de Medrano’s existence is only known through a letter. Her memory lives on in the words that Lucio Marineo Sículo, Italian scholar of great fame in the 16th century, dedicated to her. Except for this testimony written after a personal experience, in which one can read praises such as the one that precedes these lines, there is nothing that has been preserved of Luisa de Medrano. To whom, by the way, Marineo refers on numerous occasions as “Lucia”. Perhaps this is the fate of women like the professor. Or like Ende the illuminator. To go down in history without even her name being specified. 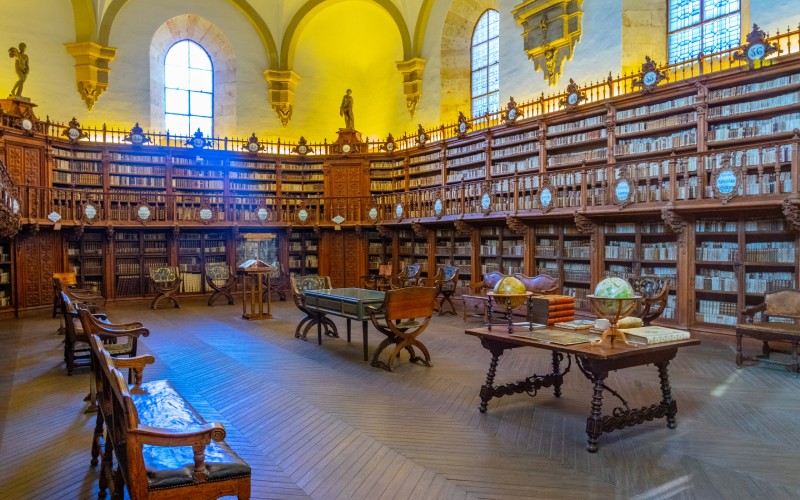 Luisa de Medrano was born in 1484 in Atienza, today Guadalajara, formerly Soria. Her family was one of the great supporters of the Catholic Monarchs in their conquests. That is why they took care of Luisa and her siblings when both Luisa’s father and grandfather died in one of these enterprises. A young Luisa de Medrano was left under the tutelage of Isabella the Catholic, who made for her the decisions she usually made for her protégés: she would be educated as a man. With the same knowledge, taking for granted the same capabilities.

This is how Luisa learned about history, culture, philosophy and the subjects in which she would excel later on. One must imagine, again just imagine, that Luisa felt comfortable and satisfied with this destiny. There is no news that she married, nor that she had any offspring. Luisa de Medrano was a woman dedicated to letters and teaching. Or that is, at least, what we know about her. 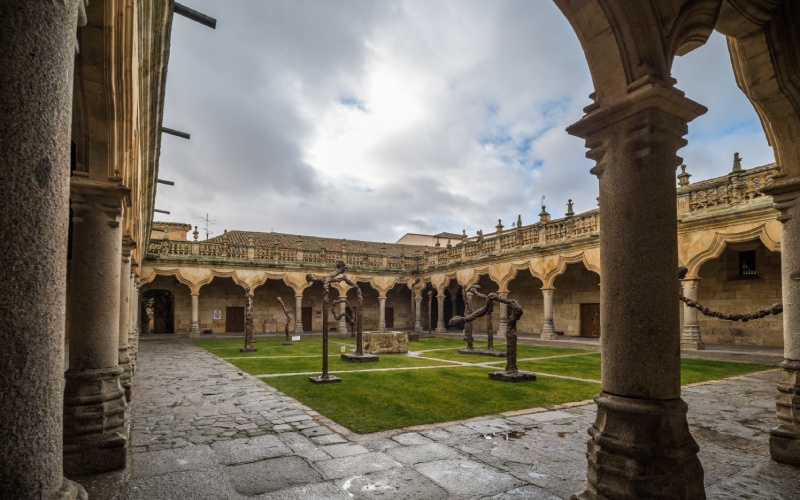 “Spain has a lot to thank you for”

Luisa, despite widespread ignorance, has been a woman much quoted throughout history. Of course, “quote” does not mean the same as “study”. So when all the chroniclers of Salamanca were dedicated to portraying the history of this beautiful city, naming its most illustrious inhabitants, they quoted Luisa. But none of them studied her. None studied her life or documented her achievements. That is why her memory was lost in the only centuries in which it could have been recovered. In any case, without studies of her name, there remain these quotations, which have stood the test of time, pointing in some way to the impression this woman made on her contemporaries.

“The whole of Spain owes you much, for with the glories of your name and your erudition you illustrate it” wrote Lucius Marino Siculus in that letter. He did so after attending one of his classes or lectures at the University of Salamanca. He had heard her name, he explains, but had never before had any contact with her undoubted abilities. Luisa must have spoken very well, taught very well, illustrated very well. This is the source of Marineo’s praise, from which in turn the only attempt to build a profile of her must be born.

This profile can be built on the basis of certain elements: culture, nonconformism, determination and intelligence. At a time when women could hardly get an education, Luisa de Medrano dared to teach.

She is also accompanied by controversy, as the absence of her name in the University Archive of Salamanca has led to believe that she was not who history says she was. The German researcher Therese Oettel began a journey in search of answers that took her to places as varied as Santander, Madrid, Salamanca, Alcalá de Henares, Soria, Valencia, Granada, Seville and Simancos. Her tracing of the professor’s footsteps led her to the surprising conclusion. Surely Luisa de Medrano held an extraordinary professorship. Moreover, it is very likely that she did so in substitution of Antonio de Nebrija, whose life and work is easily accessible. 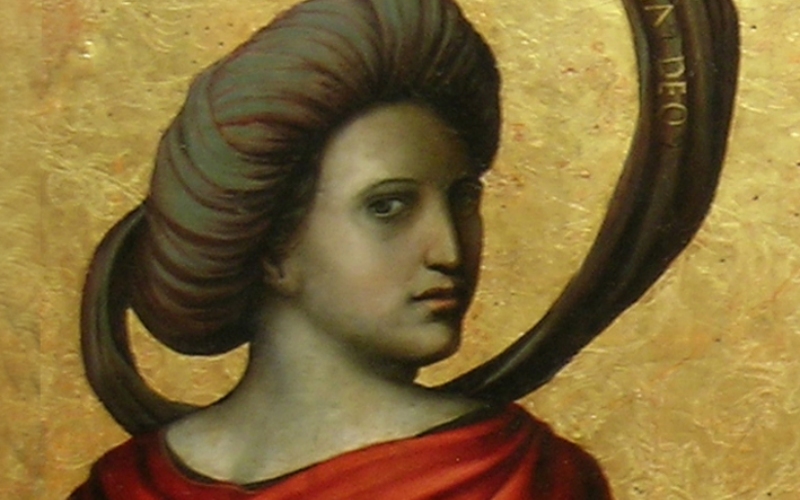 “Now it is easier for me to believe what I doubted before.”

Believing what was doubted before. That is, to return to the initial thread: that women had capabilities. That they could not only think like men, but also talk like men, act like men. They could even do it better. Marineo, the Italian scholar, opened his eyes with Luisa de Medrano. He stopped doubting.

So, he decided to include her name in a lost first edition of “De las cosas memorables de España“, an edition that has not reached the present day. As it happens, we are left with the memory. And the certainty that Luisa de Medrano was a memorable woman, but in the end, her memory only exists in a letter. Only one of her contemporaries, despite impressing all of them, bothered to put in writing all that she was. And she didn’t even get her name right. 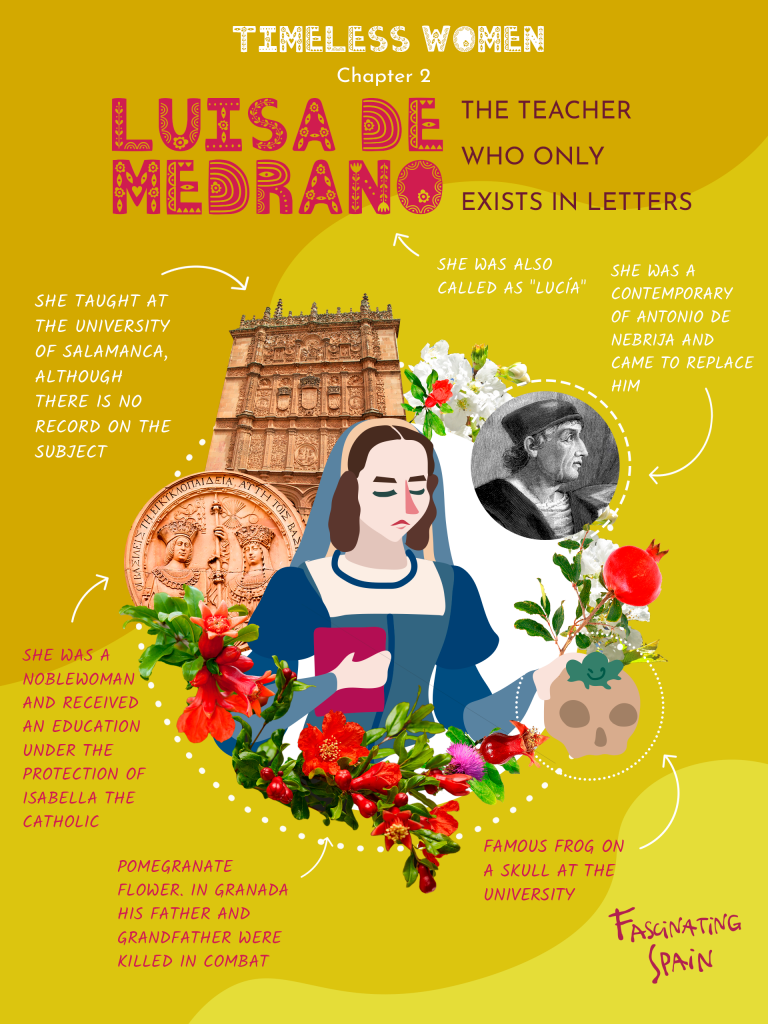 history, Salamanca, viewpoints
It may interest you...