The Royal Alcazar of Seville is a defensive palace complex located in Seville. Its walls show the passage of different periods, from the Hispanic-Muslim world to the Modern Age. At the present time it is the residence of the Spanish Royal Family in Seville. It was declared a World Heritage Site in 1987.

History of the Royal Alcazar of Seville

The Royal Alcazar of Seville dates back to the 10th century. Abd al-Rahman III, Caliph of Córdoba, ordered the construction of a new place for the government. Dar al Imara was its name. During the taifa of Seville, a New Abbasids Alcazar was added to the caliphal construction. Mubarak’s Palace was the hub of the kingdom’s political and cultural life. Almoravids extended the complex up to the Guadalquivir river and later the Almohads continued the expansion.

When Seville was conquered around 1249, the Alcazar became the seat of the Crown. Palaces such as the Gothic Palace or the Pedro’s Mudejar Palace were built on the previous structures. The Royal Alcazar of Seville also underwent some modifications during the Modern Age and the 19th century.

What to see in the Royal Alcazar of Seville

The Puerta del León (Lion’s gate) is the main access to the Royal Alcazar of Seville. This door had a painting of a lion of unknown origin, but it was already represented in the 19th century.

At the end of the 19th century the painting was replaced by a tile mural from the factory of Menasque. A lion of Gothic style is now represented in the tiles. 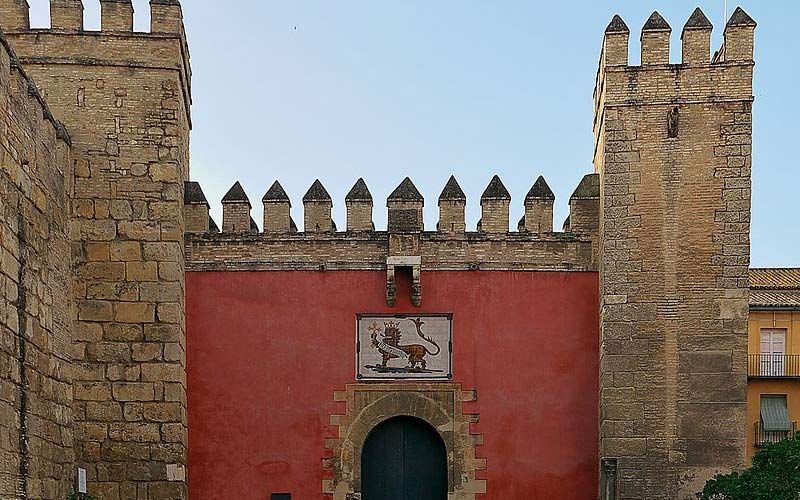 This door gives access to a courtyard with the same name. Through it you can access to the Patio del Yeso and the Sala de Justicia, as well as the Patio de la Montería. Sala de Justicia, which is a Mudejar room, square-shaped and wooden coffered ceiling, was built by Alfonso XI. It was probably used during Almohads times for council meetings. However, it was renovated by Christians. They used it with the same purpose.

Patio del Yeso can be accessed through the Sala de Justicia (Courts of Justice). It is also an almohad structure with a square floor plan. It has a tank in its centre and an arcade structure. The arches have a sebka decoration.

Patio de la Montería is the main patio and also the entrance to the Mudejar Palace of Pedro I. It was the meeting point for knights and hunters when King went hunting. 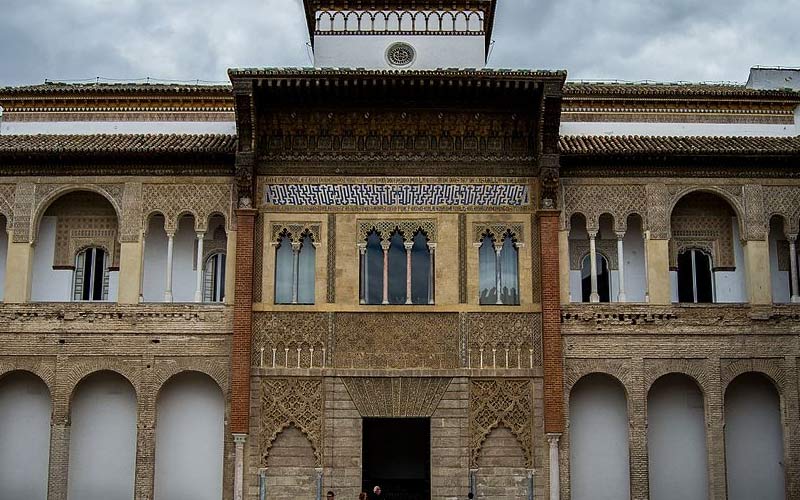 Facade of the Mudejar Palace from the Patio de Montería

This courtyard lead to the Cuarto del Almirante, a place used as Assembly hall. There are some important paintings from the Andalusi art such as La toma de Loja por Fernando el Católico by Eusebio Valldeperas.

Around this area is the Casa de Contratación of India, where trade and navigation was controlled in the Royal Alcazar of Seville.

The Palacio Gótico (Gothic Palace) was built under the reign of Alfonso X. The chapel, the Gran Salón and the Salón de los Tapices are the main rooms of the palace.

The chapel holds an altarpiece of the Virgen de la Antigua. On the other hand, the Gran Salón  holds paintings about the Colombian navigation. Finally, the Salón de los Tapices (Tapestries room), as its name suggests, has its walls covered by large tapestries.

Another important place in the Royal Alcazar of Seville is the Mudejar Palace of Pedro I. It served as a private sphere for the king, as opposed to the Gothic Palace, used for political and administrative life.

In addition to the already mentioned rooms, inside this palace there is also a Salón de Embajadores. It is the most richly decorated room in the palace. It occupies the place of the old living room Al-Turayya, from Muslim times. The highlight of this room is the wonderful dome made by Diego Ruiz. Under it, there is also a Gothic arrocabe with the portraits of the kings. 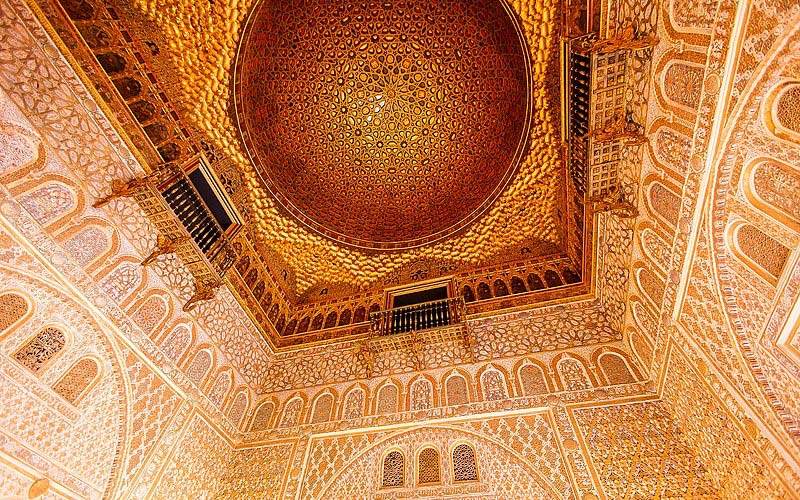 Dome of the Salón de Embajadores

The gardens of the Royal Alcazar of Seville are its truly essence. They are the oldest gardens in town. The Estanque de Mercurio (Pond of Mercury) stands out which holds a bronze statue of Mercury from the 16th century.