If Spain can boast of something, it is variety, the variety offered by the green forests, mountains and rivers of the north versus the pine forests of the Mediterranean landscape. Beach or mountain. City or nature. Calm or party. Active tourism or sunbathing at a paradisiacal beach. The range of activities offered by the country is also large. From extensive posidonia meadows for diving to international surfing waves, such as the one in Mundaka. Spain offers alternatives for all tastes and all ages.

One of these activities, which has gone viral due to the fame of the descent of the Sella River, is rafting. However, the Sella river is not the only place where this sport is practiced. Spain has a multitude of whitewater rivers, with channels that can be an ideal plan to spend with the family without any danger, to torrents only accessible to experts. The incursions, however, should always be done with the help of a guide, especially if you are a beginner.

These are five of the best Spanish rivers for rafting: the other descents of the Sella.

Getting started on the Genil river 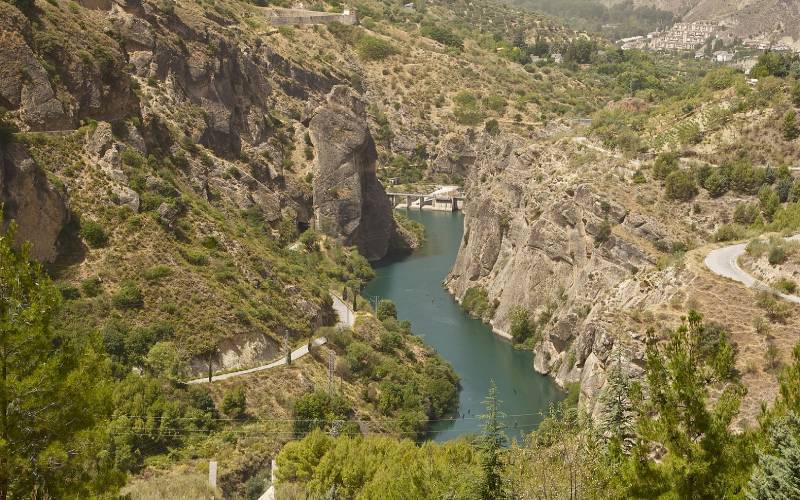 Genil river in the sierra of Güéjar. | Wikimedia

In the heights of the Sierra Nevada mountains of Granada, the Genil River is born, which holds the positions of the second longest river in Andalusia and the seventh longest in the Iberian Peninsula. Through its 358 kilometers it is common to practice rafting, although it is also common to descend it by other means, such as kayaking or canoeing.

The Genil River, which crosses the provinces of Granada, Córdoba, Málaga and Seville, is a perfect option to get started in the adventure of rafting. In some stretches, children over six years of age are even allowed to go up the river. The most famous stretch is the one between Benamejí and Palenciana. It allows to enjoy small doses of adrenaline under total security. 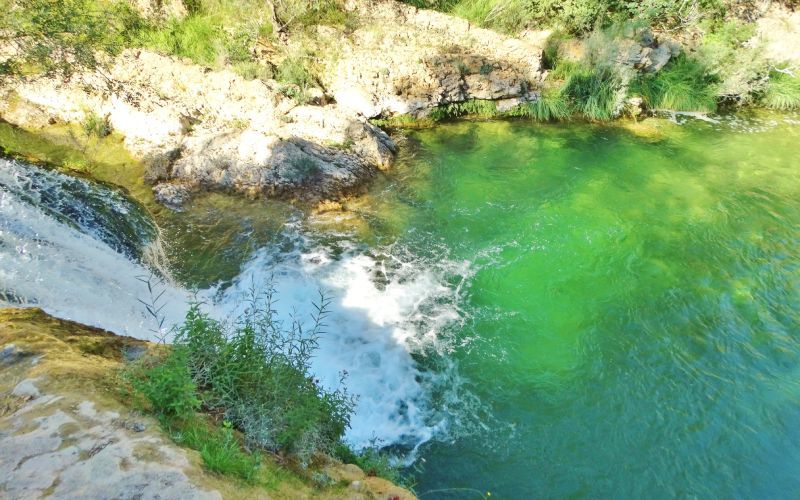 The Genil river is, in turn, a tributary of the Guadalquivir river. The latter rises in the Sierra of Cazorla, in Jaén, and flows through the provinces of Córdoba, Seville and Cádiz, until it flows into Sanlucar de Barrameda. The river course overtakes the Genil in position and is the fifth longest in the country, with more than 600 kilometers in length.

However, it is the upper zone, known as Alto del Guadalquivir, where the conditions allow the practice of rafting. Between June and August the stretch of the river that runs through Jaén is perfect for beginners in the sport in a place of great scenic and environmental importance. In fact, in this section it is possible to see otters, kingfishers or even specimens of European pond turtles. 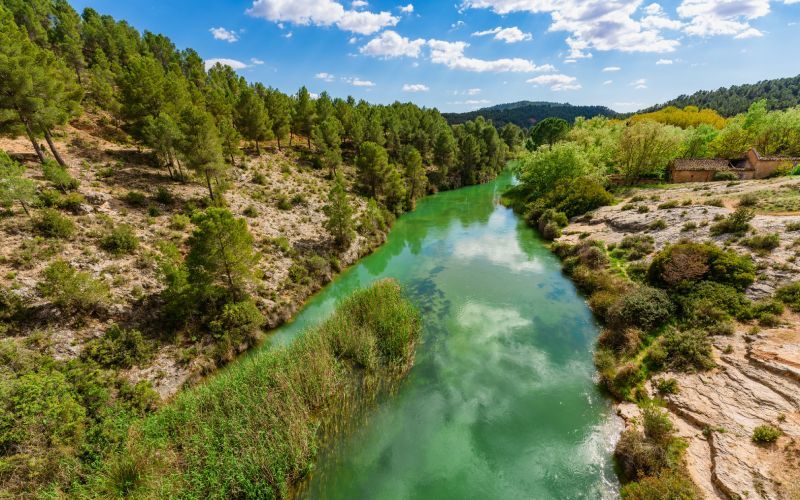 Turquoise waters in the gorges of the Cabriel river. | Shutterstock

Much calmer is the navigable area of the Cabriel River, the main tributary of the Júcar River that runs through the territories of Teruel, Albacete, Cuenca and Valencia. With a length of 220 kilometers, the Cabriel rises in the Albarracín mountain range and stands out for the cleanliness of its waters, which at some points become turquoise. This is due to the fact that in most of its course the action of human beings does not interfere.

Rafting in the waters of the Cabriel River is suitable for all audiences, since it does not present great difficulty nor does it become boring. The little ones can also take part in the activity of rivers’ descents. The tour can be carried out in different sections of the river, although two stand out. In the first place, the area of the Chorreras, in which the beauty of the surroundings stands out and which is located in Cuenca. However, the most frequented stretch is that of Tamayo, on the Valencian side, which is about six kilometers long.

Griffon vultures in the gorges of the Duratón river 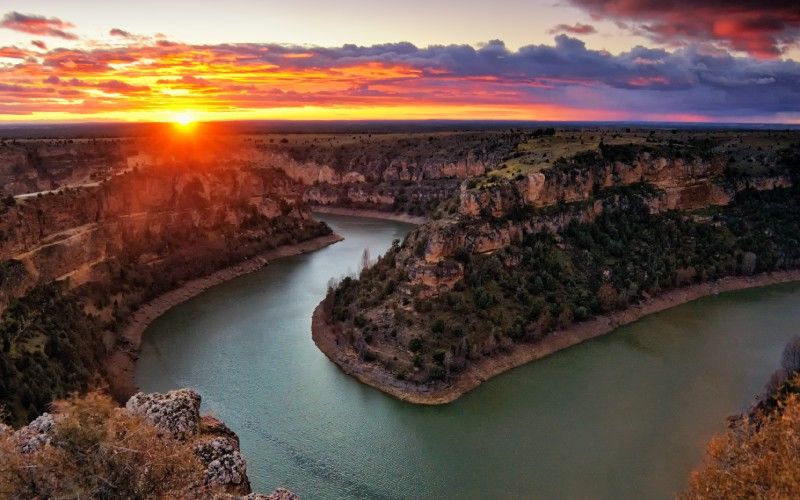 Sunset in the gorges of the Duratón River. | Shutterstock

Born in Madrid, the Duratón River spreads from the Guadarrama mountain range until it flows into the left bank of the Duero River, of which it is a tributary. In its journey, the river passes through the town of Duratón, to which it gives its name, and crosses the provinces of Segovia and Valladolid, as well as Madrid. Its route reaches 106 kilometers and acquires its maximum splendor in the Duratón gorges.

This river offers a large number of excursions along its 25 kilometers, which are not very difficult and can be covered in three and a half hours. In addition, in this enclave is the largest European reserve of griffon vulture, as well as you can enjoy the ruins of the monastery of Nuestra Señora de los Ángeles de la Hoz or the hermitage of San Frutos.

The descent of the Gállego river 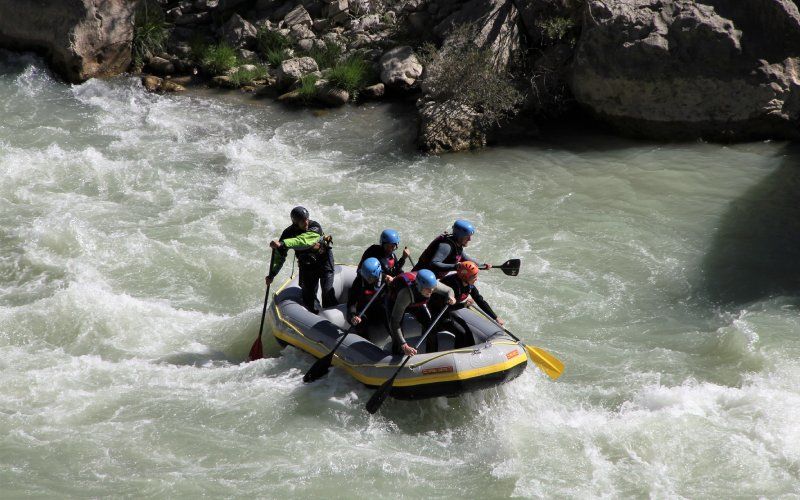 A group of people rafting on the Gállego river. | Shutterstock

Further north, in the community of Aragón, the Gállego river is one of the most famous for rafting practitioners. This torrent is born in Formigal and flows into the province of Zaragoza, after more than 190 kilometers. It is one of the main tributaries of the Ebro.

In the Gállego river, the eight-kilometer stretch that ends in Santa Eulalia is suitable for beginners; however, the best known stretch is the one that runs between the municipality of Carcavilla and the beaches of Murillo de Gállego. In this section the level of the descent becomes more complicated and it is necessary to have a certain level, however the increase of the level is accompanied by an impressive landscape. Amazing rivers to enjoy sport and nature in Spain.