The name of Torta del Casar Cheese refers to the shape and geographical area of this particular cheese, which is the result of the chance of ancient shepherds. When made, the cheese sometimes did not harden and remained in a semi-liquid state, receiving the name of “atortado”, which is reminiscent of flour flat breads.

Torta del Casar is a cheese with its own name, known both within and outside our borders. Cheese made from raw sheep’s milk (merino and entrefina), with a great peculiarity since the coagulation is carried out with vegetable rennet from the cardoon (Cynara cardunculus), matured for a minimum of 60 days.

Torta del Casar’s rind is thin with golden tones and a soft consistency when pressed with the fingers. Its interior is a soft, spreadable paste with a creamy texture and a white to yellowish colour. It has an intense aroma with a low salt content and a slightly bitter taste due to the use of vegetable rennet.

Due to its peculiar texture we can prepare it in two ways for consumption, dividing it into wedges like any normal cheese and keeping it in refrigeration or cutting the top part as if it were a lid. We must keep it in the fridge and a few hours before consuming it we must temper it, so we can enjoy all its flavour and its special texture.

The presence of established herds has been a fact since 1291, when King Sancho IV granted the village of Casar, through the Royal Privilege, a piece of land around it so that cattle breeders could freely take their cattle to graze. It is known that already at this time the Torta del Casar was used as a payment currency, although it is not until 1791 when in the Interrogations of the Royal Court the existence of the sheep’s cheese from Casar de Cáceres is mentioned in writing. 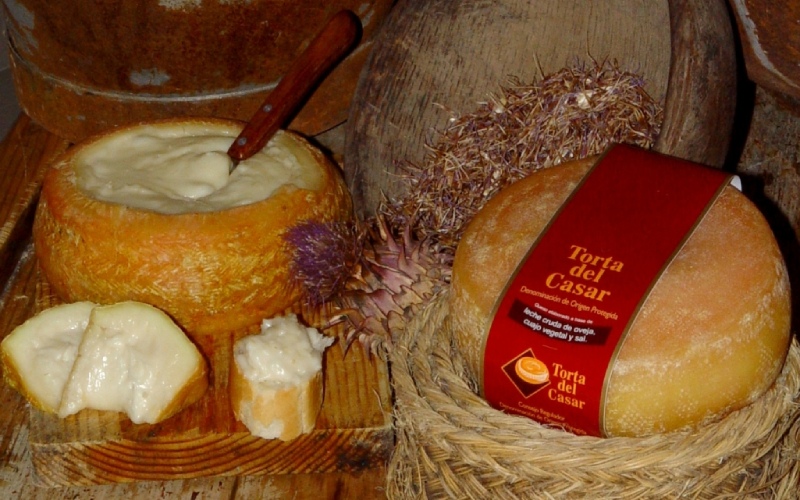 The area of production of the Torta del Casar includes the regions of Los Llanos de Cáceres, Sierra de Fuentes and Montánchez in the province of Cáceres. It has a continental climate of long summers and short winters, characterised by a great variety of herbaceous plants that are nutritious for the livestock, accompanied by bushes, oaks and cork oaks.