To talk about Ángela Ruiz Robles with the depth she deserves would take almost a lifetime. It seems that she lived three. She was born in Villamanín, León, on March 28, 1895, and she died on October 27, 1975, in Galicia, where she spent most of her life. 80 years in which she formed a family and became part of many others, and fighting for what she believed in, teaching others, living together in the different places she lived. Ángela Ruiz Robles was a daughter first, then a student, and a friend. Then wife, mother, and dedicated neighbor. She was a teacher by vocation, a convinced writer, and inventor who developed projects in which she trusted with all her heart. In fact, she put her heart into everything she did.

Ángela Ruiz Robles lived and died being all this. She lived to become a pioneer of what today allows thousands of people to read these lines. A promoter of a different kind of teaching and communication. But history, cruel as it has learned to be, has erased her from the books to which she dedicated herself.

Ángela was born into a wealthy family, completed her higher education at the Teacher Training College of León, where she taught between 1915 and 1916. It was in 1918, however, when her vocation as a teacher reached a peak that she would never abandon. The Galician village of Santa Eugenia de Mandía welcomed Ángela as its new teacher, a position she would hold during the next decade. She soon revealed herself as a close and dedicated teacher, different from what was known. She cared about her students; she went out of her way for them. Her desire to teach was sincere and committed.

That is why her role in classroom never ended. She helped those who needed special education in a schedule that was far from the officially established one, went to their homes after class to make sure the lesson was learned, or that her students had no more questions. As a teacher, she knew her students and behaved with each of them according to their personalities, desires and insecurities. ‘Doña Angelita’, as she was known, was the perfect teacher. She was the same teacher for everyone, but she knew how to adapt to personal needs, so she ended up being a particular teacher for each student. 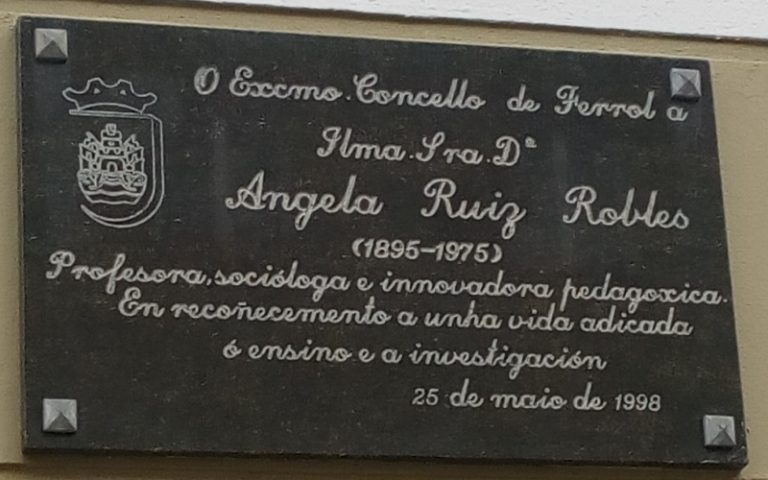 Commemorative plaque in the city of Ferrol to Ángela Ruiz Robles | Moniquiña, Wikimedia

Doña Angelita left Santa Eugenia de Mandía in 1928, to settle in Ferrol. It was in this city where she founded the Academia Elmaca, a name born from her three daughters: Elena, Elvira and Mª Carmen. In this academy, located in her own house, he gave classes to candidates during the day. During the night, he helped to train people with few resources. In 1934, she became manager of the Escuela Nacional de Niñas del Hospicio, with the aim of helping abandoned girls to integrate into society. During 1945, she was a teacher at the Escuela Obrera, which had no cost. She never stopped teaching, never needed more than the desire to do so to commit herself to a project. Ángela Ruiz Robles was a dedicated, enthusiastic, and generous woman. An entrepreneur, energetic and altruistic.

The value of her work is even greater if we consider the circumstances that the country was going through during that time, and the way in which education was approached. As a strictly structured, sometimes violent, compulsory procedure, with rare examples of real involvement from teachers. Ángela turned all this upside down, and always looked for a close approach, as well as innovation. In this sense, she needed tools and procedures that the Ministry of Education did not provide, so she decided to invent them herself.

Ángela Ruiz Robles is especially known for developing the first prototype of an electronic book. She called it the Mechanical Encyclopedia and filed the first patent on December 7, 1949. She defined it as ‘a mechanical, electrical and air pressure procedure for reading books’. It was formed of plates that worked thanks to an electrical circuit she designed.

When she showed it to get funding to develop it, she explained that she intended to lighten the weight of students’ bags and create something that could be used both at school, and at home as well. She also found many didactic reasons. It could be used for a more interactive learning, in different languages, and could be adapted to students of all levels. Ángela was confident in her project and in the reasons behind its creation, so, sketch in hand and explanations in mouth, she went to Madrid to exhibit it to different institutions. She received great praise and words of encouragement, but there was no funding.

Despite this disappointment, Ángela remained confident that her way of understanding education was the right one, so she kept improving her invention. A decade after this first attempt, on April 10, 1962, she filed a second patent: a device for reading and different exercises. He had ordered an improved prototype, made of zinc and bronze, to the shipbuilders of the Empresa Nacional Bazán. The subjects to be learned were contained in reels like the rolls of photographic film, which could be changed according to the subject to be studied. 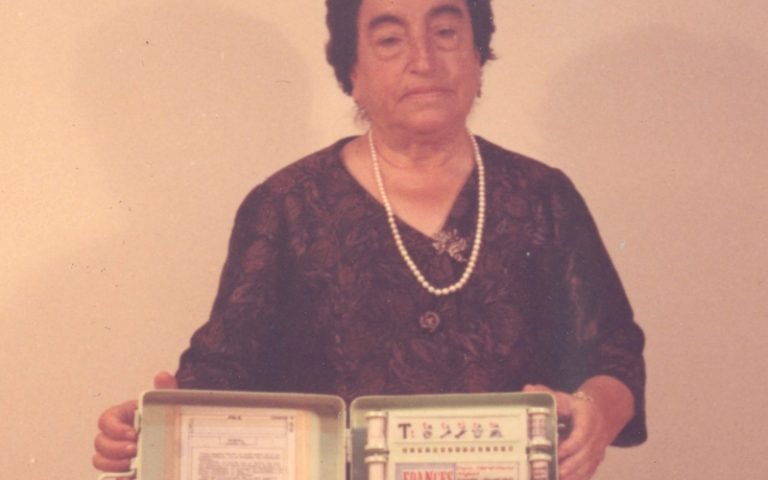 She came back to Madrid. She interviewed potential partners because she was sure that someone would be interested in this improvement. As it happened on her first trip, she found no funding. Ángela Ruiz Robles was unable to develop or distribute this invention, that places her as the pioneer of the electronic book. She was almost 70 years old when she was rejected again, and 75 when she was the one who refused to exploit her patents in the United States. This invention was born in Ferrol, Spain, in a particular educational environment. She would die there. Today, this prototype is exhibited at the National Museum of Science and Technology in A Coruña.

The ovation of a village and many awards

The village of Santa Eugenia de Mandía could not have imagined, when it welcomed Ángela in 1918, that she would end up becoming such a valuable member of its community. On December 18, 1925, the neighbors gathered to applaud their neighbor, in a public act in which they highlighted and thanked her for what she was doing for all of them. They praised this dedicated teacher, woman, mother of three daughters whom she had to raise alone early, as her husband died prematurely.

Therefore, it has to be summed up like this. With the applause of a people he considered a home, with a dozen recognitions from the scientific field and with a final, although delayed, award. In 2013, the Ministry of Education and the Ministry of Economy edited the book ‘Ángela Ruiz Robles y la invención del libro mecánico’ (Ángela Ruiz Robles and the invention of the electronic book). There was nothing left to finance. The only thing left was to bow our heads and rescue from history another name that was erased.

It looks like Ángela Ruiz Robles lived many lives. At least three. As a woman, as a teacher and as an inventor. Regarding the second, she also had time to write 16 textbooks on different subjects. Regarding the third one, the one that took place when she was putting her daughters to bed, she dedicated herself continuously to making improvements for that invention for which, in the end, nobody bet on. This is truly a pity. In 1971, Michael Hart developed the Project Gutenberg, for which he is recognized worldwide as the inventor of the e-book. It is a pity because it could have happened earlier, it could have been in Spain and it could have been named after a woman. 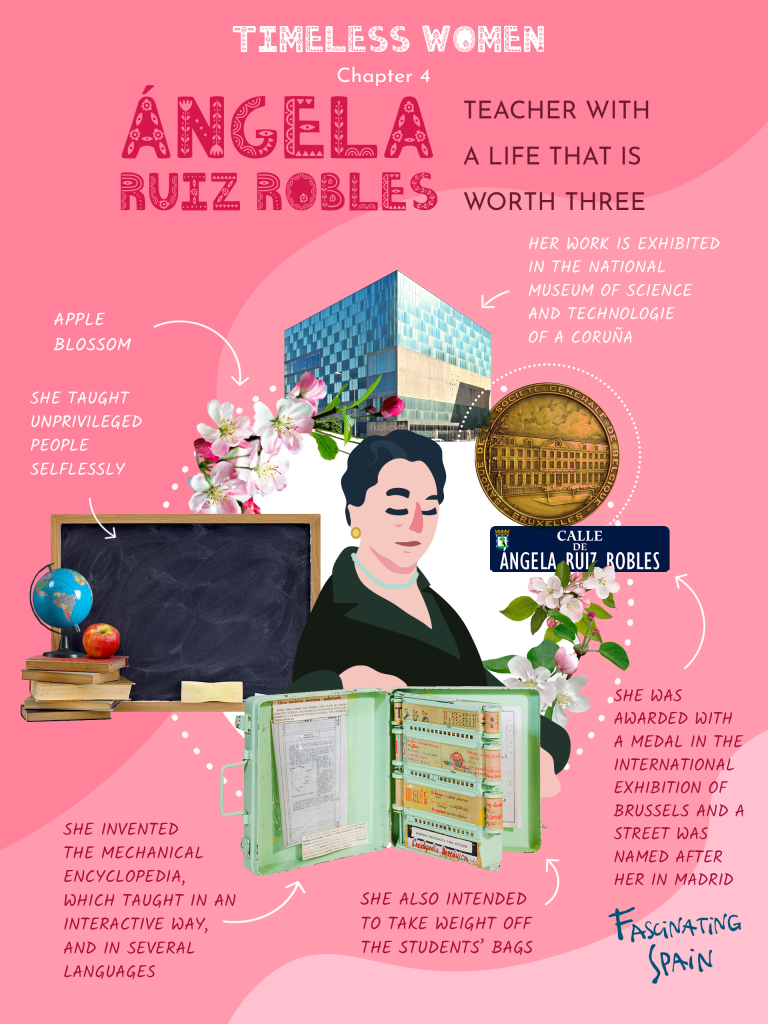