Considered the second most visited museum in Spain each year, the Dalí Theatre-Museum is an eccentric tribute in the form of the most surrealist artist in the country’s history. It was Salvador Dalí himself who reconstructed and shaped it. Because before it became a museum, as its name indicates, it was the main theatre built in 1849. It was maintained until 1919. Some time later it was almost completely destroyed by the Civil War.

At first the idea of the mayor of Figueras, where the museum is located, was that Dalí should donate a work of art to what had been his home. But the painter and sculptor went further and proposed to donate a whole museum. It was not in vain that he chose the place, since the theatre had a special meaning for him. It was there that his first two works were performed in 1918. It was on October 13, 1970 that the restructuring began to become a reality. Four years later, on October 28th 1974, despite not being completely finished, the museum was inaugurated.

Details of the place. | Shutterstock

Dalí and a museum as a legacy

Salvador Dalí was one of the most important painters, sculptors and even writers of his time. He is considered one of the greatest representatives of surrealism in history. Not in vain, he is known and admired all over the world. The Persistence of Memory and The Soft Watches are his most famous works.

The now museum is located in Figueres, in the province of Girona, where Dalí himself spent a large part of his life. Once it was decided to restore it, the people in charge were Joaquim de Ros i de Ramis and Alejandro Bonaterra. Although the dome we can find in the place was exclusively by the architect Emilio Pérez Piñero. It was in 1974, just before its opening, when Dalí himself and Oscar Tusquets designed one of the most iconic rooms of the museum: the Mae West room. 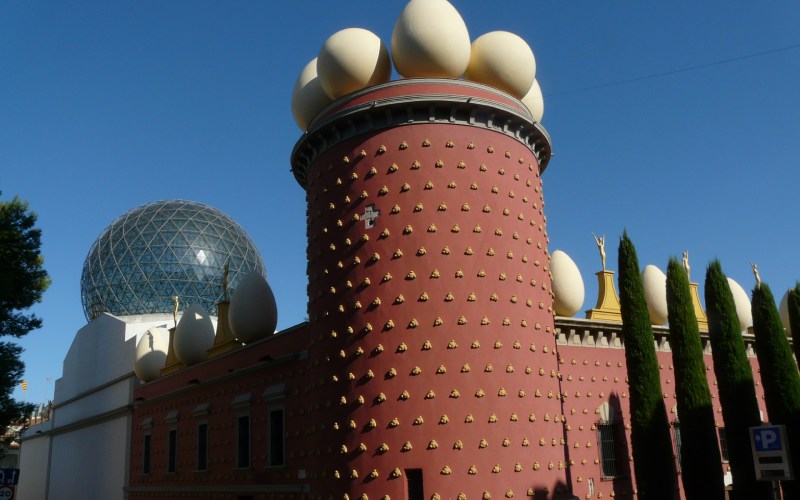 Surrealism reigns in the building. | Shutterstock

Every room and every wall is decorated in some particular way. After the Civil War, only the foundations of what was once the theatre with its burnt-out beams remained. However, the painter wanted to keep them as an immutable memory of what happened. Six years after his death, more rooms were opened and others rehabilitated, this time by Vicente Miranda, Eulàlia González and Daniel Freixes.

Style and architecture of the Dalí Theatre-Museum 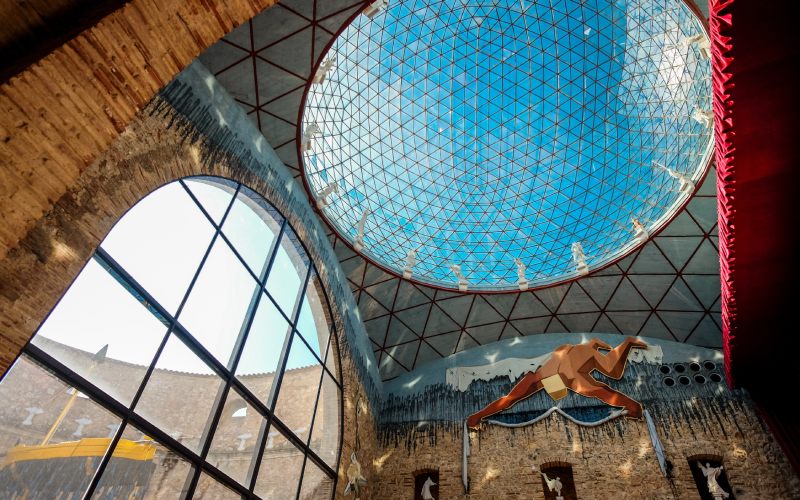 The museum is founded on the same artistic expressions in which Salvador Dalí himself moved. And these are Cubism, Impressionism, Futurism and, of course, Surrealism. The façade of the building, which is covered with ceramic Dalinian bread and mannequins, stands out. But nothing is as striking as the giant eggs that complement the whole; giving the final touch to the cornice of the building. Another detail that stands out is its transparent geodesic dome with a reticular structure.

As it has been preserved as much as possible of the old theatre, it maintains the neoclassical style that characterised it. Although, of course, it is always decorated with some figure or extravagant painting to give its distinctive touch. In 2001 it was last updated with the opening of the Dalí jewellery exhibition rooms. Before this, they belonged to the Owen Cheatham collection, but now they can be found in the Dalí Theatre-Museum. Among them, there are 39 pieces of precious stones and gold, another two jewels designed by the painter and their respective designs before being carried out.

A place with a lot of history to discover

Before his death, Dalí wrote a will detailing the number of works he left to the Spanish state. Given the large number of paintings and sculptures, they were eventually divided between the Reina Sofía Museum in Madrid and the Dalí Theatre-Museum. Since his death on January 23, 1989, more than 1,500 works can be found in the latter. Some of these include The Spectre of Sex Appeal, from 1932, several portraits and Galateta of the Spheres, from 1952. Nor should we forget Poesía de Maérica-Los Atletas cósmicos, Galariana or Port Alguer, created in 1943, 1944-45 and 1924 respectively.

Figueres was the birthplace of Dalí. | Shutterstock

One of the best known features of the Dalí Theatre-Museum is located below the main floor, specifically in the crypt. It is there that the remains of the painter himself rest. Although he was buried there against his will; as his idea was that after his death he would be taken to Púbol Castle. But this is not the only secret of the museum. Another can be found in the central courtyard, where one of the artist’s most famous works, the Rainy Taxi, is located. This is not just any model, as only six were made in the world. One of them was taken by Al Capone, although we can also highlight Clark Gable or even President Roosevelt.

In one of his most iconic works, not only the eyes are needed, but also a giant magnifying glass. When looking through it you can see a sofa in the shape of lips, some paintings as eyes, a table that turns into a nose and a giant wig that transforms into Mae West’s face. If the work is already curious, there is even more. The wig was made expressly by Llongueras, appearing in the Guinness Book of Records. As Salvador Dalí himself said, to go through each of the rooms of the Theatre-Museum is to immerse yourself in a theatrical dream.