The unenforceable Alfonso I’s will, known as the Battler, took a long time to be resolved. Three years before his death, the monarch of the Kingdom of Aragón decided to leave his lands, and also his property, in the hands of three great religious orders: the Order of the Holy Sepulchre of Jerusalem, the Order of the Hospitallers and the Order of the Temple. Alfonso I died in 1134, the victim of wounds suffered in the Battle of Fraga, leaving his kingdom in chaos. Almost a decade later, no definitive solution had been found to this conflict.

The esteem and respect that Alfonso I felt for these orders in general, and for the warrior monks of the Temple in particular, can be seen in this decision. It is striking that other orders created by the monarch himself, such as the brotherhood of Belchite, were left out of the equation. He showered them with glory and privileges in their early days; but they fell into oblivion when these knights, with the dust of the first crusades in the Holy Land, arrived in Spain. Nine centuries later, we find in this Alfonso I’s will the irrefutable proof of the power they acquired. Of this story, however, only the first chapters had been written when the Battler died.

The false reign of Ramiro II

Alfonso I’s will was unenforceable. It is not just that, by all accounts, no nobleman close to royalty was going to allow these military religious orders to control the kingdom. It is, first of all, that the law of Aragón itself prevented it. The patrimonial lands of the Casa de Aragón were just that: patrimonial lands of the Casa de Aragón. They could only be accessed by the heirs, who had to take care of them and maintain them; and they could not be disposed of in any way. They could not donate them, they could not divide them and, of course, they could not bequeath them to foreigners. With the exception of those territories conquered during their lifetime; in this case, for example, Zaragoza, which Alfonso I conquered in 1118.

The orders claimed all that he bequeathed to them, but the nobles of the Kingdom of Aragón acted quickly. First, it is said, they hid the death of the monarch for days, until they came to a decision. They had found an heir to the throne; and they would impose him even with the opposition of the warrior monks.

This heir was called Ramiro, the brother of the late Alfonso, and was henceforth known as Ramiro II, the Monk. He was, in fact, a monk. Ramiro dedicated his life to the Church. He lived his early years in the French monastery of San Ponce de Tomeras, was abbot of the monastery of San Pedro el Viejo and bishop of Roda. Ramiro had no interest in the monarchy, nor in the Kingdom of Aragón as a territory to govern; but neither could he reject what the law considered a legitimate inheritance. Ramiro was the legitimate heir, so he accepted it. 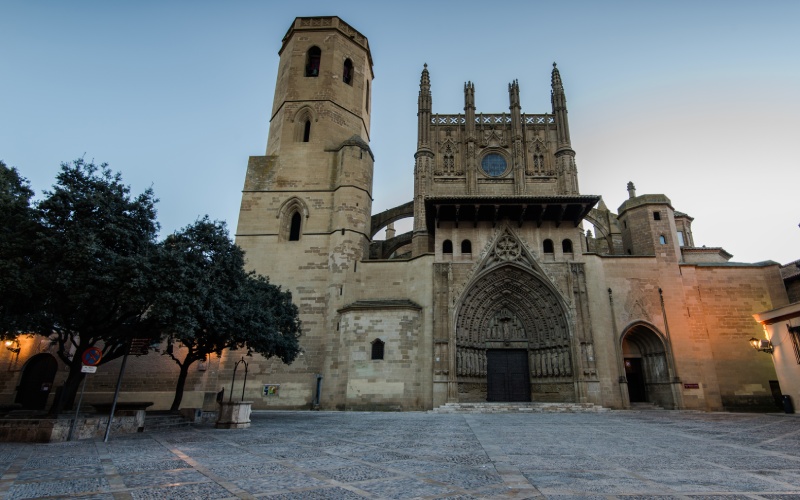 Monastery of San Pedro el Viejo, in Huesca, where he lived before and after becoming king Ramiro II. | Shutterstock

For a few months he served as king; but it seems that, above all, he worked out how to retire to what he considered to be his true life. He married Agnes de Poiters, a French princess who had already shown fertility in a first marriage. From this union was born, only a year later, the only daughter of Ramiro II. The year was 1136, and Princess Petronila was born.

A few months later, in 1137, Ramiro II signed the marriage agreement in Barbastro to unite Petronila with the other great protagonist of this story: Ramón Berenguer IV, Count of Barcelona, son, moreover, of the great Templar Ramón Berenguer III. The new legitimate heiress was barely one year old, while Ramón was over twenty. But they were legally united, which allowed Ramiro II to leave the kingdom in good hands and retire again to the monastery of San Pedro el Viejo, in Huesca, where he died in 1157. He died a king, albeit only on paper.

Ramiro II always enjoyed a good relationship with Ramón Berenguer, who ruled in his name until the monk’s death, without granting himself any title other than that accepted by law. Ramón Berenguer IV and Petronila finally married in 1150; when the future queen reached the age required to consummate the marriage. Their first son, Alfonso, was born in 1157. After her husband’s death in 1162, Petronila ceded the kingdom to her first-born son, who became Alfonso II. He reigned between 1164 and 1196 in the territory that was to be consolidated as the Crown of Aragón.

But lets go back again: the cause of the Knights Templar, which remained in the hands of Ramón Berenguer from 1137, has yet to be resolved.

Both the Knights Templar and the other religious orders, as well as the Church, fought to collect the impossible Alfonso I’s will. They could do little against the opposition of the nobles, nor against Aragonese law. Soon, Ramón Berenguer IV entered the scene; who managed to negotiate a mutually satisfactory scenario with all of them. The satisfactory scenario for both parties translated, in practice, into the following: the orders renounced Alfonso I’s will, and in exchange received lands, fortresses and privileges. Both the Order of the Holy Sepulchre and the Hospitallers accepted in 1140. The Templars did not.

It would be three years before a final agreement was reached. Almost a decade after the death of Alfonso I, he got what he wanted: that the orders would remain in his kingdom. The Knights Templar stayed and became strong. As a result of the negotiations with Ramón Berenguer, they consolidated both their presence in the territory and their power and influence.

These negotiations ended with the so-called Concordia de Girona (“Girona Agreement”); signed in November 1143 between the Count of Barcelona, the Templar masters and the synod of bishops. By this agreement, the Templars finally renounced their rights over Alfonso I’s will; but in exchange they greatly strengthened their position on the Peninsula. They received important castles, such as that of Monzón, as well as privileges in terms of tithes and rents; and an important promise: Ramón Berenguer would donate to the Knights Templar the fifth part that corresponded to him of the military conquests that he carried out. This is known as the fifth Templar.

The Crown of Aragón hoped to rely on the military strength of the Knights Templar in the years to come. And although the Templars, at first, only wished to obtain income to finance their activities in the Holy Land; they ended up involved in the struggle of the Kingdom of Aragón against the Muslim kingdoms of the 12th century.

Aragón, castles, history, Templars
It may interest you...