“No pain, no gain” becomes a fact when it comes to facing the most complicated paths on the Way. The numerous new routes to reach Santiago de Compostela make the variety of leg-breaking slopes almost unbearable. That is why only the main routes are listed. What makes these slopes some of the hardest on the Way to Santiago is the unevenness or their location on the stages to which they belong. Let’s start walking up those challenging slopes. 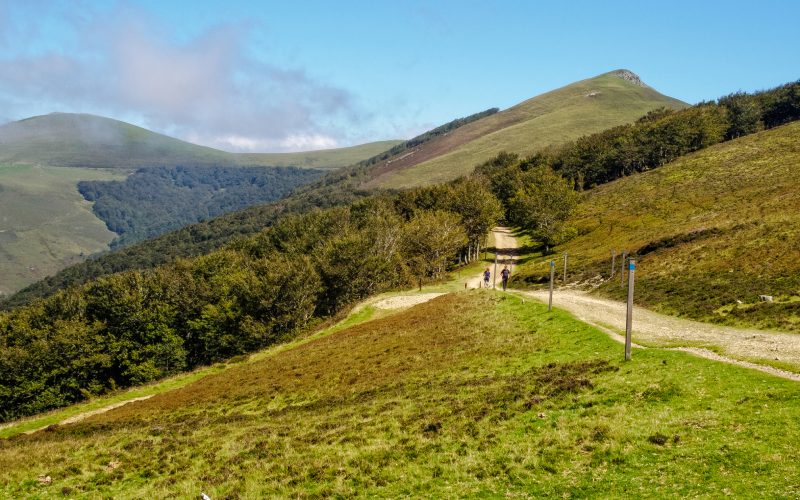 It is impossible not to include this on the list. This one is the toughest most pilgrims get to know, located on the border with France, in the Navarre side. As the high point of the stage that goes from Saint Jean Pied de Port to Roncesvalles, this is the favourite one to start the French Way from a long distance. The slope is climbed from just over 170 metres to 1,430 metres. Before that, in the French area, you will go through the Bentartea hill. The views that can be seen while walking it up are impressive, with spectacular panoramic views of the Pyrenees. It is, without doubt, the most difficult of this Jacobean route. 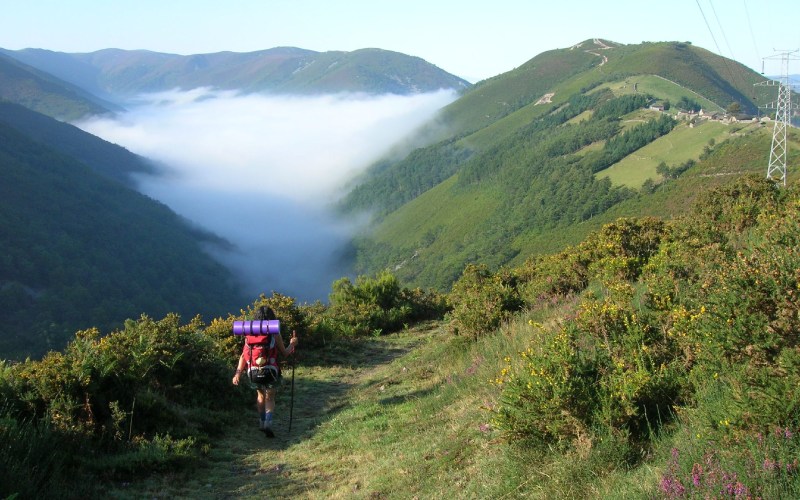 The most important stage of the Primitive Way is the one that goes up to El Palo. This stage normally starts in Borres and takes this tough slope from Pola de Allande. In this way you can easily reach this town, from where you have to overcome almost 600 metres of unevenness. From the top of the Asturian mountains you have to walk down to reach Berducedo. A route that in winter reaches new levels of difficulty. Only if the weather is good, there is an alternative through the ruins of old pilgrims’ hospitals and the La Marta path. 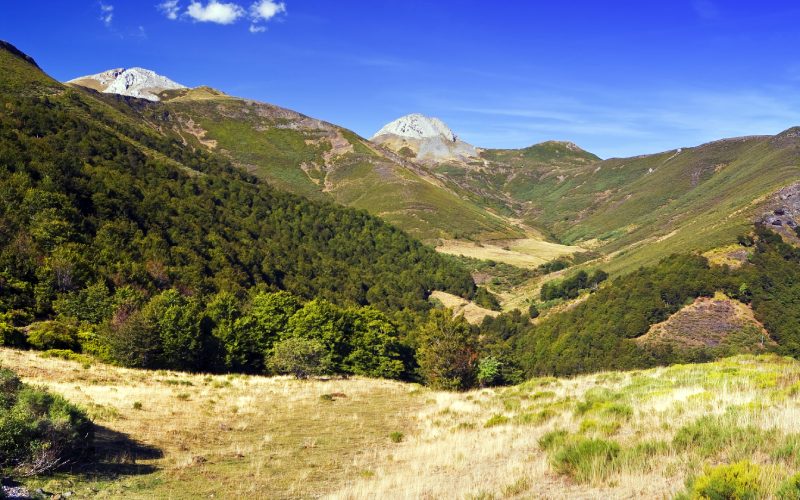 The Vadinian Way is named after an ancient Cantabrian tribe. It is also known as the Lebaniego Way in its stretches to the monastery of Santo Toribio de Liébana. From San Vicente de la Barquera it turns to the interior of Cantabria and the Picos de Europa in what is possibly the most mountainous route of all. Before linking up with the French Way in Mansilla de las Mulas, next to León, you overcome stages as tough as the one that goes up the Horcada de Valcadao. Less than eight kilometres overcome more than 700 metres of unevenness. They are usually done right at the beginning of the stage, leaving the isolated Fuente Dé. Then there are 14 kilometres to Portilla de la Reina, passing through the Pandetrave pass. More than 20 kilometres without facilities but where the beauty of the mountains makes up for it. 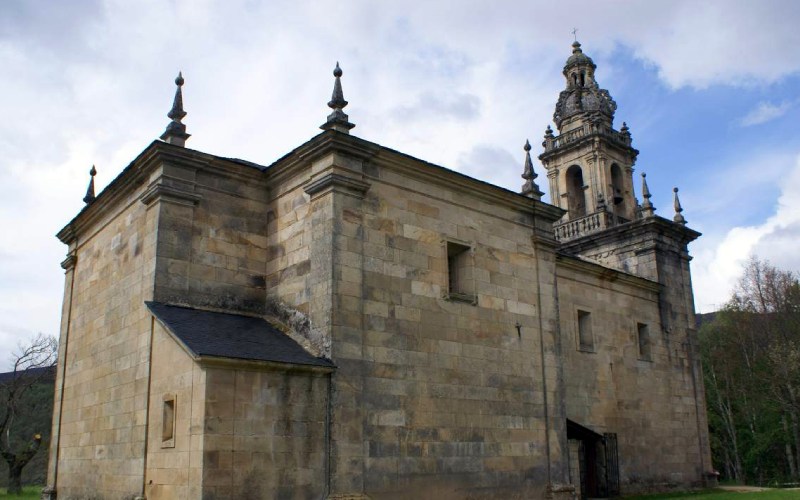 The entrance to Ourense from the Silver Way in its variation through Puebla de Sanabria is a climb through leafy slopes. A natural display of excellent beauty, truly spectacular. Compared to the previous ones it may seem light. However, the forest tracks it takes in its slightly more than 300-metre slope from Lubian and La Tuiza are quite steep. Also, the rains imply that they are not always in the best condition. It is not unusual either to find fallen trees. This increases the difficulty. At the top, amazing views and the joy of entering Galicia are waiting for those who have been walking from Sevilla, Cádiz, Huelva o Mérida. 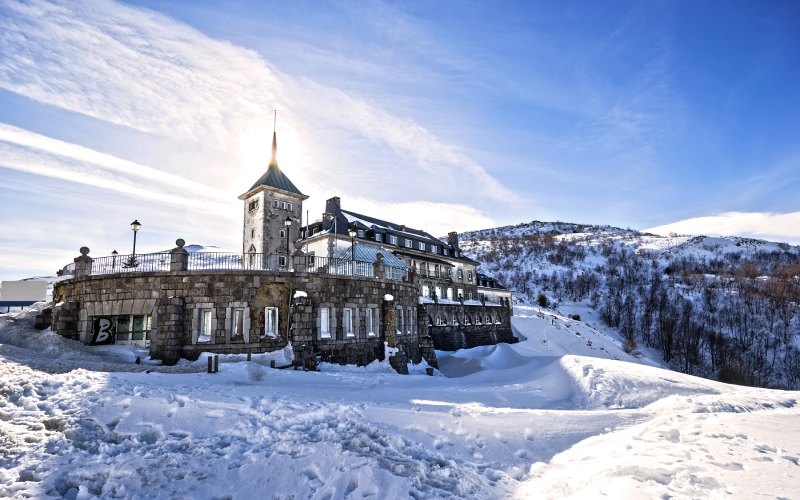 This famous slope is known for the traffic jams and closures it suffers in winter. Almost a kilometre of accumulated unevenness waits for those who take the link between the French and the Northern Way, towards Oviedo. It is called the Salvador Way, in reference to the Oviedo cathedral. You can also do it the other way round, which would change the matter completely. Be that as it may, the ups and downs are continuous and lead to a descent that is also quite challenging. With snow, there are longer alternatives based on the ‘Nacional 630’ road. 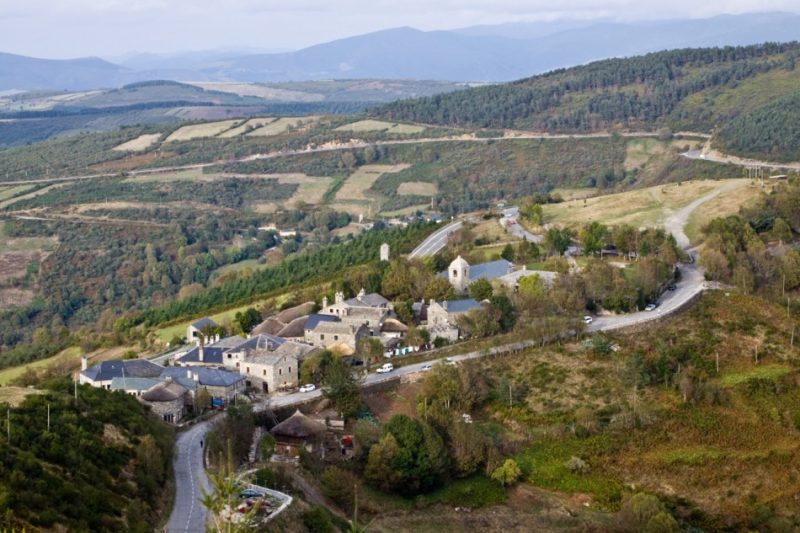 From Las Herrerías, a rural village at the foot of Los Ancares on the side of León, to O Cebreiro is the most famous of the tough slopes of the Way to Santiago, on the French Way. It goes from forest tracks to forage trails. Snow is common in winter and the reward is the beautiful village that awaits at the top. With its stone architecture, its pallozas, it exudes a medieval atmosphere in which you can recover from the more than 600 metres of walking up.

Laboral University of Gijón, one of the first buildings you see as you enter the city after the tough slopes. | Shutterstock

The Northern Way does not leave large paths like those of other routes, but it does leave large slopes. As we arrive to Gijón, in Asturias, two of the hardest ones are waiting for us. 340 and 200 metres that go up and down completely, coming from Villaviciosa, a tough challenge. Alto de la Cruz is the first one and it appears out of nowhere, after days without great difficulties. On the other hand, with no time to recover, the Collado del Infanzón is found. After that, there are almost ten kilometres to reach the centre of Gijón, which improve when you reach the San Lorenzo promenade. 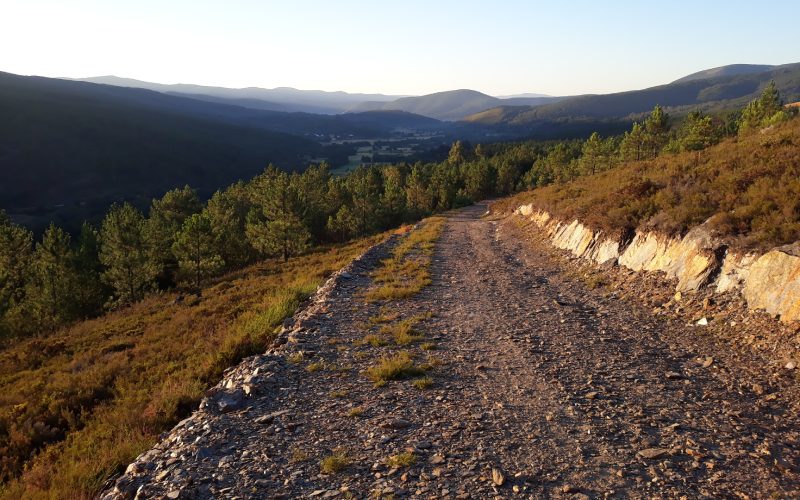 The Sanabria Way, a very interesting ending to the Silver Way, is not lacking in great slopes. The pilgrims are used to them when they take on the last of the great slopes they have. There is barely more than 400 metres of unevenness from Tamicelas, past Laza. The land cuts to avoid the fire propagation are mixed with forests and steeply sloping stretches. In summer it is very hot and it is necessary to take water with you. Before the getting to the top, you find Alberguería, a town in Ourense from which it is said that the Knights of the Temple departed to protect the pilgrims on their journey. If you head off from Campobecerros, it would be a perfect end to the stage.

Earlier, we mentioned the stage that followed this one, which is the last of a three-way journey. The first goes from Lafuente to Potes. From here it goes to Fuente Dé. It goes from 300 to 1,100 meters, a slope with a length of more than 30 kilometres. Following the Deva you pass by Santo Toribio de Liébana, a real wonder. In the meantime, the natural environment that you can enjoy is typical of the Picos de Europa. Far from everything and everyone, you end up reaching one of the most isolated villages in Spain, the beautiful Fuente Dé. 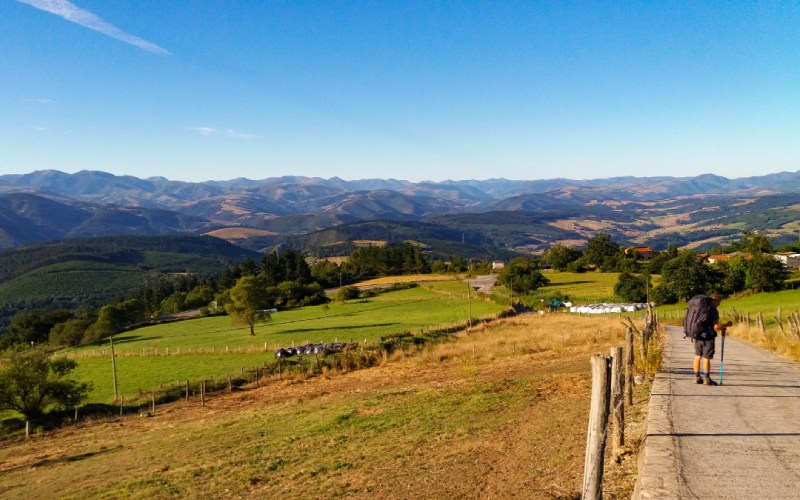 About 500 metres of unevenness are the stars of an uphill climb that becomes tougher due to the previous stages. Starting from Grandas de Salime, the first part of the day is dedicated to walking up until entering the province of Lugo. It is worth mentioning that if you have made it in a good shape, it will not represent a great challenge for you. However, as it has been pointed out, it is very likely to bring along fatigue or injuries. In any case, once you have passed the path of El Acebo, everything will be easier. 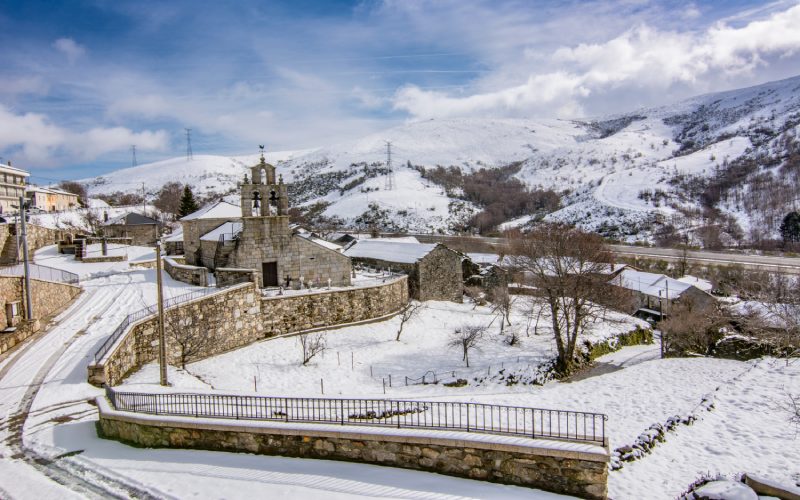 Padornelo and its mountain pass during winter. | Shutterstock

The interference of the AVE works is fundamental throughout the Silver Way. As it is a natural route, it has given rise to the parallel progress of railways and roads. Thus, the variation through Sanabria is followed by the route that goes to A Gudiña and Galicia from Zamora. Because of this the climb to Padornelo can vary greatly. The people in charge of the works indicate where to go in this ascent that awaits from Requejo, past Puebla and its lake. It is necessary to be alert and there will be no problem. The end is walked by the National Road. Always dangerous, the links with the A-52 are a death trap for the pilgrims. You have to be very careful because the cars do not always respect the warnings and go very fast. 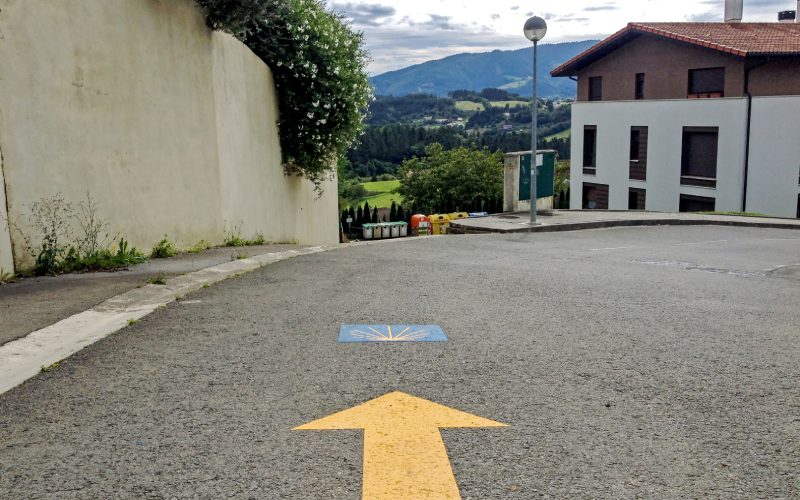 Markina-Xemein, the end of the tough stage. | Shutterstock

This stage takes place between Gipuzkoa and Vizcaya. It involves going deep into the Basque mountains. Impressive valleys and forests define a route that begins in the coastal area of Deba. It is very tough and from Olatz it stretches for 17 kilometres without facilities. However, the bar that is there is not always open. The trails through forest areas are very hard and are made more difficult by the logging work usually carried out there. The main peak is Mount Arno, 500 metres high, which can be climbed entirely from the starting point. Afterwards, more slopes await until they go down to Markina-Xemein.

The beautiful medieval town of Jaca witnesses a stage that may or may not pass through San Juan de la Peña. This is something we recommend you if you have time and are experienced. The reason is that one of the most extraordinary monasteries of Aragón is to be visited there. This monastery has a new and old structure. The latter is embedded in the rock. It was an environment associated with royalty. To see it you have to assume a difficult climb from Atares. This village is reached after overcoming a hill. It prepares your legs for what awaits you: almost 600 metres of unevenness in 6 kilometres. The descent to Santa Cruz de Serós is a real challenge, since you will lose everything you have gained. Therefore, the logical thing to do is to stop in Santa Cilia. 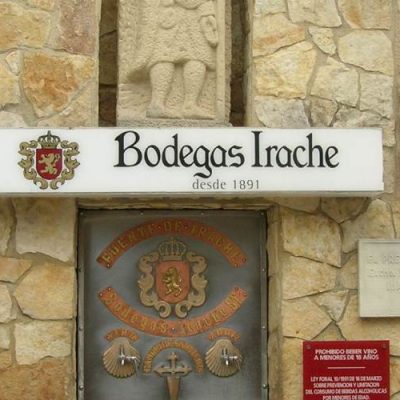 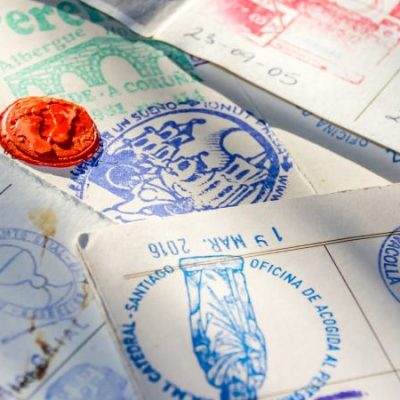 Irache Wine Fountain, a classic of the French Way
Already linked to the variants that start from Somport and Roncesvalles/Saint Jean Pied de Port, Más información