After the arrival of Jaume I, in the 13th century, following the Christian reconquest and the expulsion of the Muslim population, Valencia entered a period of splendour. A new society built from scratch and in full growth attracted people from different places; turning Valencia into a cosmopolitan city. Many historians consider this Medieval Valencia to be the authentic Valencian Golden Age.

Symbols of a new life 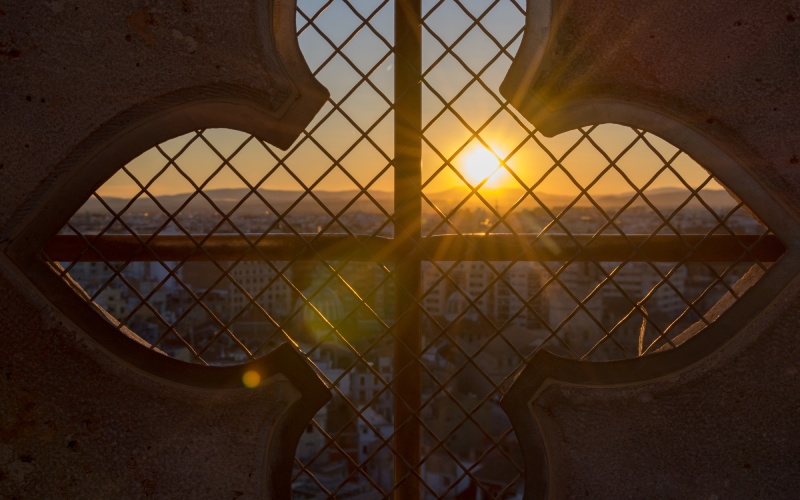 Contrary to what many believe, Valencia is the city with the greatest amount of medieval information about the 15th century, the period of its greatest splendour. There are many clues that serve to dismantle some of the old beliefs about medieval life in the western Mediterranean. 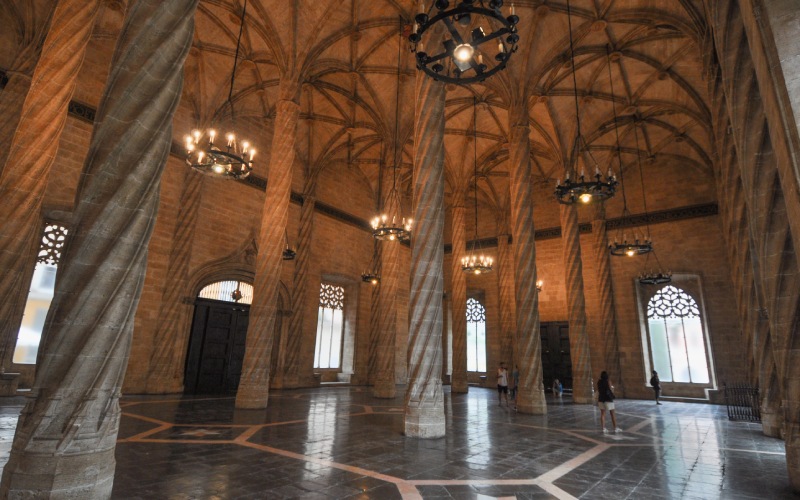 It is estimated that there were up to 1200 looms in medieval Valencia; which became one of the most important textile industries of the time thanks to the arrival of many Genoese craftsmen. The silk industry in particular generated important economic activity. At that time, the Taula de canvis, a municipal bank to support commercial operations, was created. The Lonja de la seda y de los Mercaderes (Silk Exchange) was also built and Valencia became a commercial emporium that attracted merchants from all over Europe. 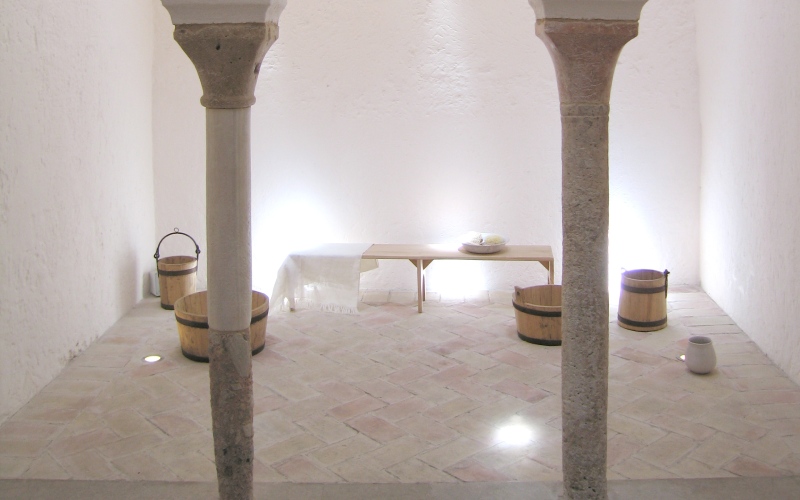 In the 15th century there were up to 15 bathhouses catalogued, which refuted the general idea that the Middle Ages was not a time when hygiene was particularly important. An example of this is the Baños del Almirante. This Mudejar construction is located next to the Palace of Los Almirantes de Aragón right in the old town. It is one of the few examples of this art in Valencia and practically the only one that has remained active since that time. 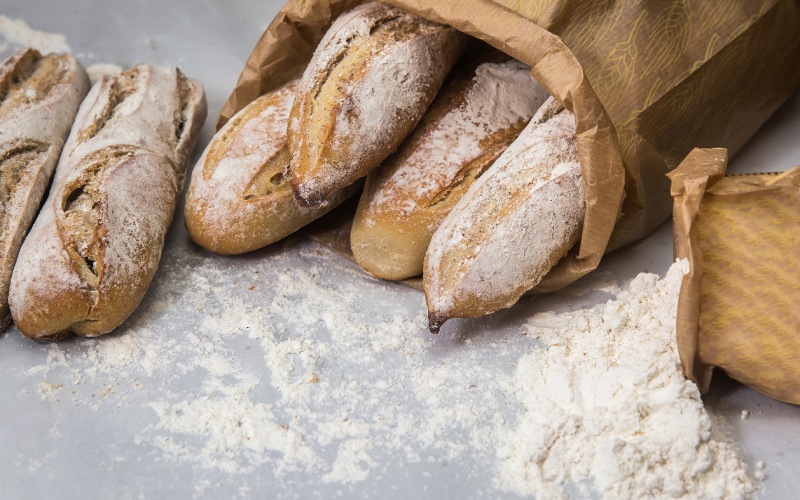 There are also as many as 76 bakeries throughout medieval Valencia that made wholemeal bread. Only seven made white bread. It should be noted that the upper classes made their own bread and even had highly professional cooks who followed complex recipe books, the chefs of the time. Their menus included a lot of meat. The lower classes ate a lot of bread, but also wine, onions, garlic and some legumes.

Slave trading was perfectly normal at the time and took place in the middle of the streets. In fact, most artisans had the services of at least one slave. Most slaves were adult men and young women. Despite being widespread, prostitution was considered to be a clearly dishonest occupation. In fact, prostitutes were forced to wear white dresses and blue aprons. 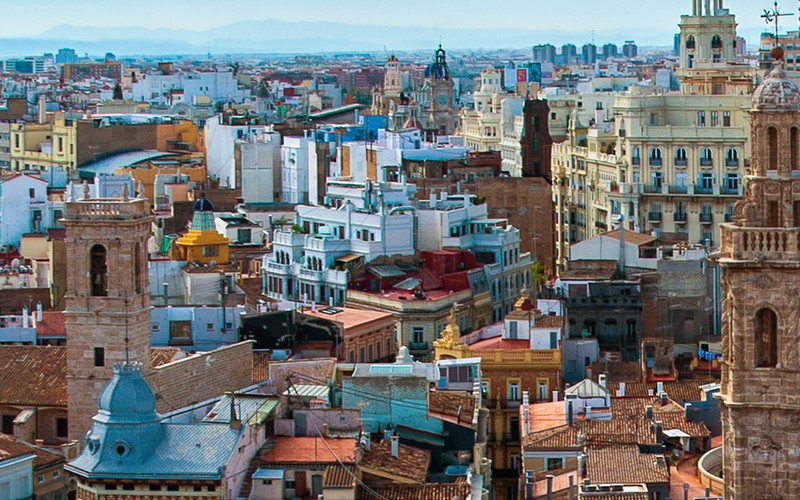 Valencia, during the 15th century, was a much more populous city than Barcelona or Madrid were at that time. It was an undoubtedly wealthy city that offered opportunities and, of course, fierce competition. The public budget financed a subsidy for the import of grain. All this required important infrastructures. 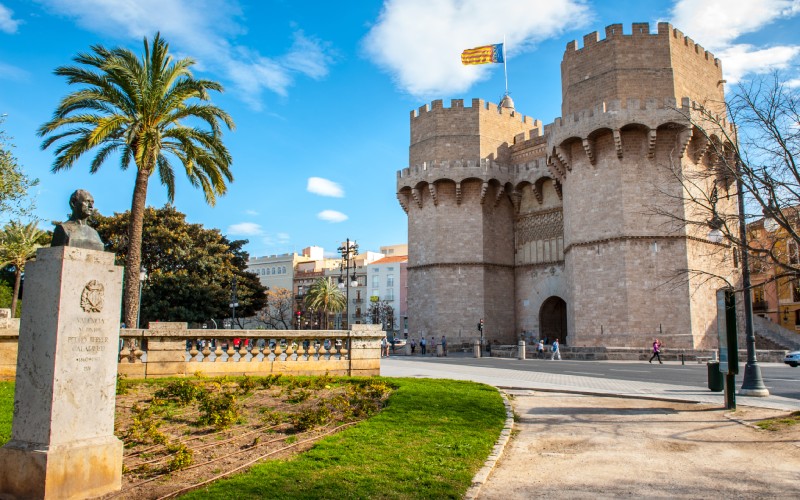 Two of the three city walls that surround the city date from this period. There are twelve gates that allow access to the city. The Jewish Gate, built in 1391 and named after the Jewish cemetery, underwent several alterations until it was demolished in 1890. Today, it is possible to see the layout of the gateway, with two towers dating from 1422 from where the stone bridge that crossed the moat started and through which the produce from the market garden was brought in ready for sale.

The Portal de la Valldigna, without a gate, in the heart of the district of El Carmen, allowed access to the Moorish quarter. In 1582 an altarpiece was placed there, a reproduction of which presides over the gateway today. And, of course, the Serranos towers, which is one of the two gates of the medieval wall that still remains standing and has been declared an Asset of Cultural Interest.

The Micalet or Valencia Cathedral tower 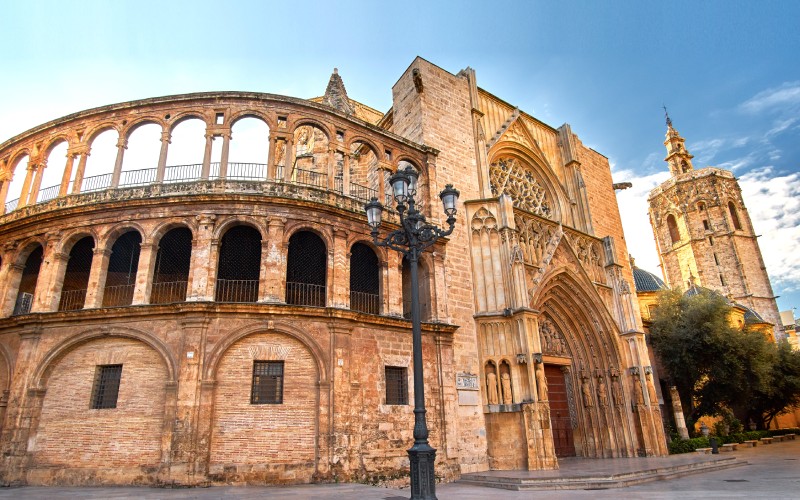 The tower of Valencia Cathedral or Micalet dates back to the 14th century; although it was completed in the 15th century. This bell tower belongs to the Valencian Gothic style, is shaped like an octagonal prism and has 214 steps. It was originally a free-standing tower and was not joined to the rest of the cathedral until the end of the 15th century.

The old Medieval Cemetery of Valencia is located in the southern courtyard of San Juan del Hospital. It is a sepulchral area dating from the 13th century and retains all the characteristics of a medieval cemetery. A cloister of arcosolia surrounding the chapel of King Jaume I in the Cistercian Gothic style is one of the best preserved gems of the city.

Capilla de los Reyes of the convent of Santo Domingo 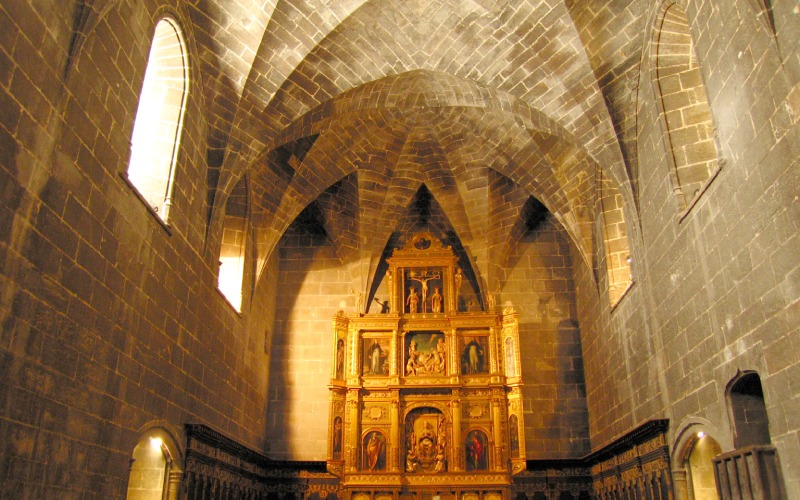 The old convent of Santo Domingo is located in the Plaza Tetuán in Valencia and is in the Valencian Gothic style. The chapel has its own access through the Renaissance cloister. It is worth mentioning its portico, as well as its double helicoidal staircase that allowed two people to go up and down the staircase without meeting. 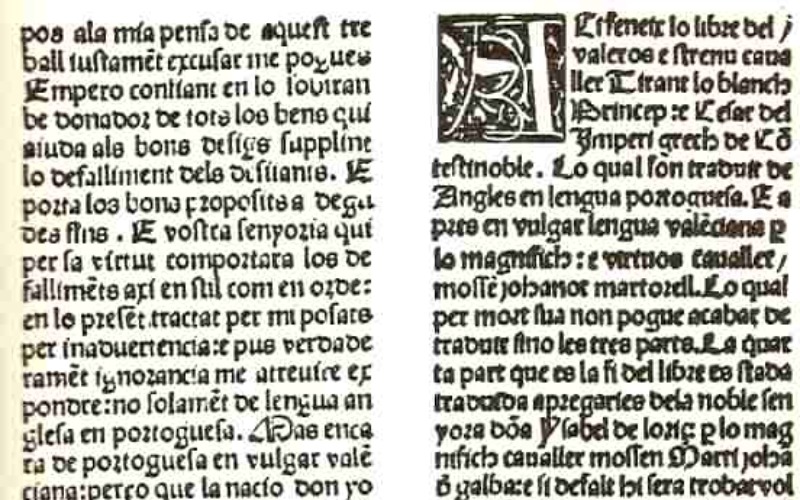 During this period, it is worth mentioning the works in painting and sculpture with Flemish and Italian tendencies. Artists such as Lluís Dalmau, Gonçal Peris and Damian Forment are clear references. As far as literature is concerned, authors such as Ausias March, Roig de Corella, Isabel de Villena and Joanot Martorell. His work Tirant lo Blanch is a benchmark of the novel of chivalry, and influenced later authors such as Cervantes and Shakespeare. From this period, at the end of the 15th century, it is worth mentioning the creation of the University of Valencia; which at that time was called Estudi General.