Located in the region of La Vall d’Albaida, Carrícola is a really interesting village. Its municipal district is tiny and barely has 100 inhabitants. However, since the end of the last century, it has become an example of sustainability. A place in the south of the province of Valencia, inland and bordering the province of Alicante, which lives in the shadow of a peculiar fortified tower. Between crops, vestiges of the Muslim era and contemporary art, the town has managed to become a landmark to consider for a getaway. 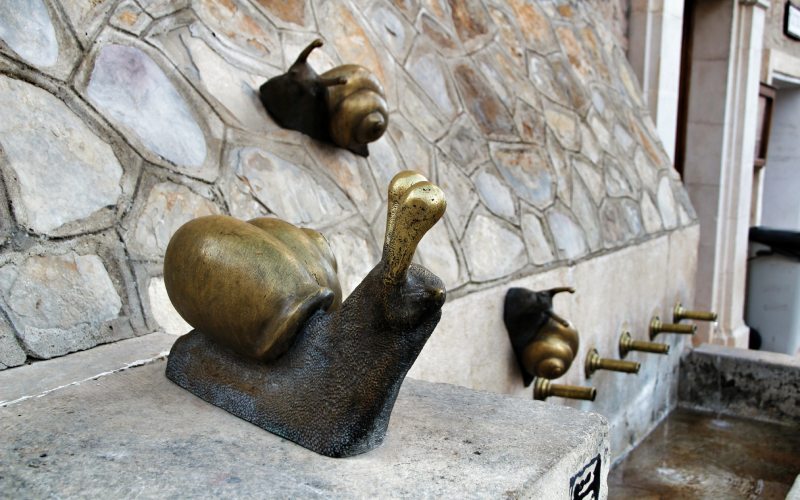 Belonging to the neighbouring municipality of El Palomar, the castle of Carrícola is located directly next to the village that gives it its name, overlooking it on a rocky outcrop. It is actually more of a tower with a small fortified enclosure. Its origin is doubtful. Several theories suggest that it was a post from the Almohad period that guarded the Benicadell mountain range. Its function, therefore, would have been to control the terrain rather than to serve as a point of resistance; although it was prepared to withstand small assaults. 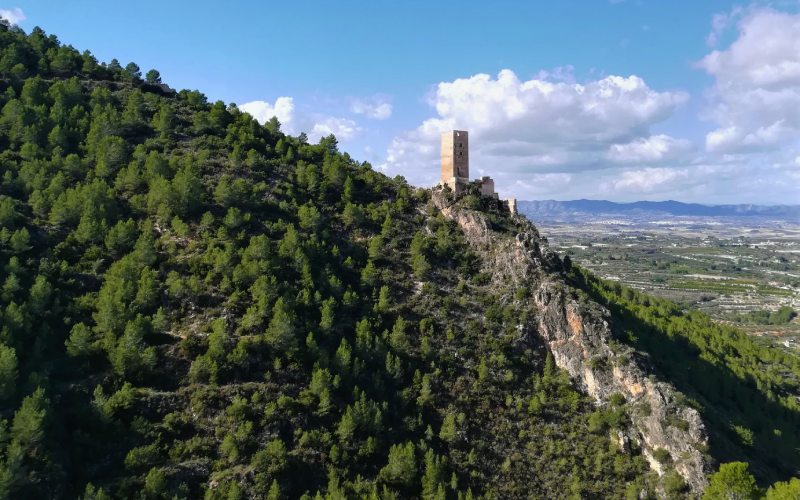 Although it is next to Carrícola and bears its name, the tower is part of El Palomar. | Shutterstock

Next to it grew a farmhouse, a small Moorish agricultural settlement, which would make up the present-day Carrícola. Curiously, the name comes from the Iberian language and Latin, so it is possible that it was inhabited before. Be that as it may, it was with the Muslims that the town was settled and took on the agricultural character that has characterised it to this day. In the mid-13th century, James I the Conqueror took the Kingdom of Valencia from the Maestrazgo to this southern part of the province. The farmhouse and tower then passed into the hands of a knight of Catalan origin, Ramón de Timor. Some theories place its origin here.

Already consolidated and described as a watchtower in medieval Christian times, it was linked to a local barony and later to the Marquises of Albaida. Its prismatic shape and small parade ground gave it a disproportionate appearance. However, as in so many other places in the country, the lack of use of the military structure led to its ruin. Fortunately, in the 21st century, El Palomar decided to restore it. A good part of one of its sides, including loopholes, was still preserved. It is easy to distinguish the original elements due to the stone used in the reconstruction. 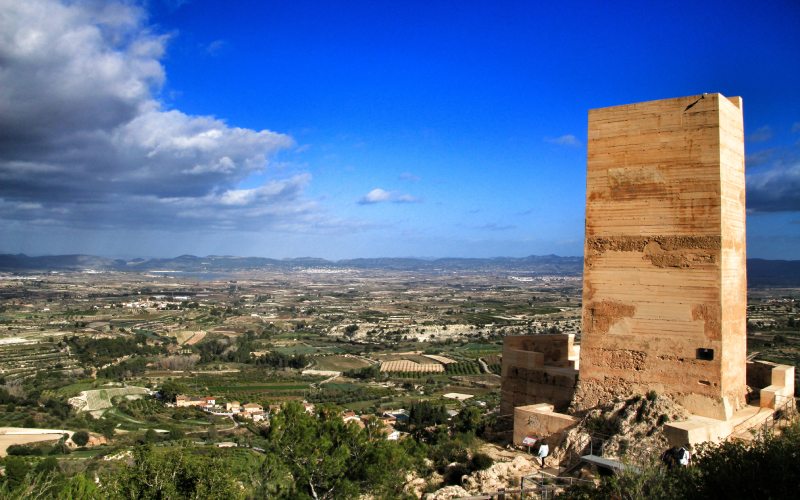 The Moorish arcades and irrigation channels of Carrícola

The Moorish tone of the farmhouse was not completely lost when it passed into Aragonese hands due to the presence of the Moorish and Mozarabic population. Thanks to this, it was possible to continue developing the extensive hydraulic system that sustained and extended the Carrícola market gardens. This network survived as a protagonist until the 20th century, when new irrigation techniques replaced it. Nevertheless, this part of Carrícola’s history is still alive as a historical and tourist element. 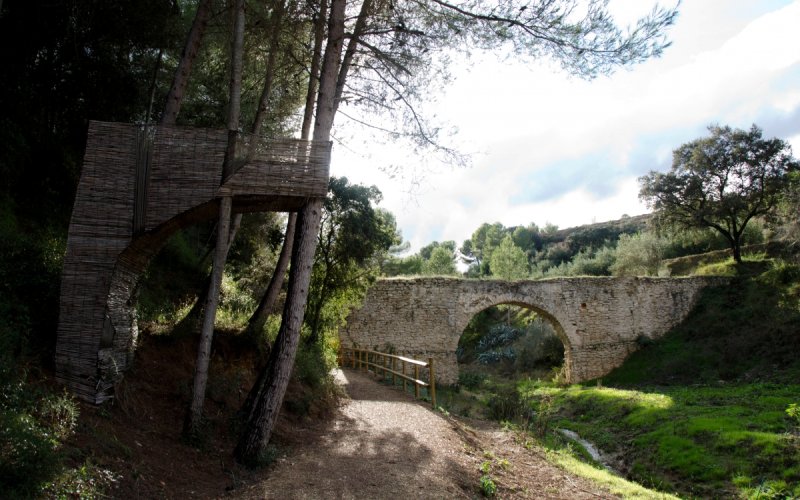 Three arcades, a sort of small aqueducts that allowed the water to be moved, stand out from the whole. These came to support the neighbouring Bèlgida, located to the north. They can be visited on an easy route that passes through the ravines that shelter them. It is barely three kilometres long and has no significant slopes. It is an original way of getting to know the agricultural environment of the town. Also, it is worth mentioning that there is a rest area with children’s play areas.

The most spectacular arcade is the Arcá Gran, which is located in the Arcada ravine. It has an arch, is the tallest and its construction is similar to its other two companions. The main body is made of masonry, while the water passageway is made of mud brick. This earthy material was very common in Moorish architecture and castles were built with it, such as the one at Baños de la Encina, which is the oldest standing castle in Spain. 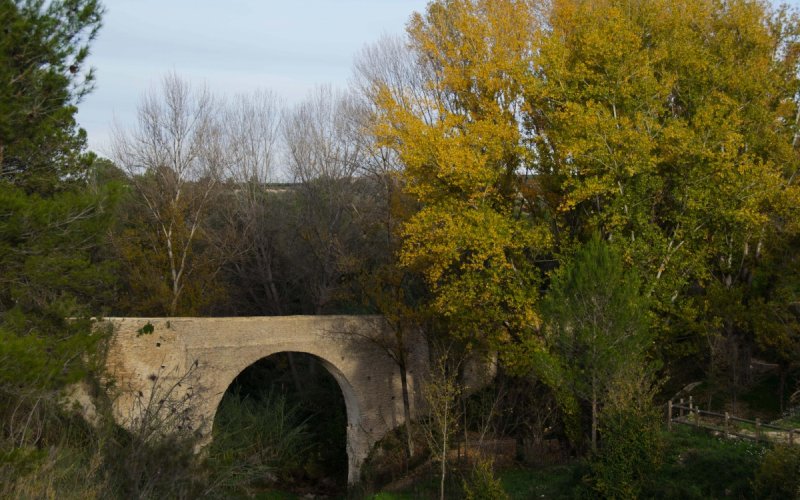 Next to the Gatell fountain is the next arcade, which, as the local town hall points out, is the smallest of the trio. Although all of them have undergone reconstructions, necessary due to use, this one is considered the closest to the original state. The longest of the group is the Arcá d’At, in the ravine that gives it its name. Documentary records of it date back to the 14th century. It has two arches of different sizes.

Since 2010, the Biodivers project has been developed in Carrícola and its surroundings. With three editions, in the aforementioned year, 2015 and 2019, it has populated the Valencian village with samples of contemporary art. Many of these pieces have a permanent character, so they are a complement to the routes that visit both the castle and the Moorish arcades. 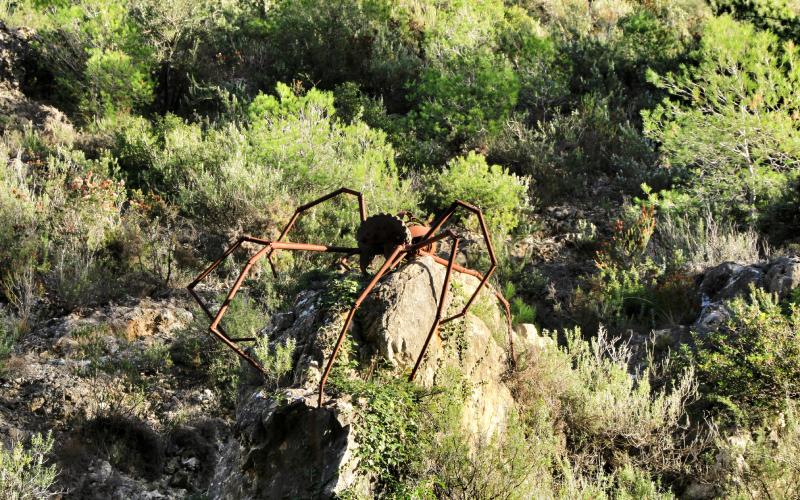 The focus of this action is sustainability. This is no trivial matter, as it was this concept that saved the town in the last third of the 20th century. At that time, depopulation was threatening the place. The economic model was still based on a Mediterranean market garden with the orange tree playing a major role. However, the arrival of foreign capital imposed a change in the agricultural exploitation, which became sustainable in an almost obligatory way. Since then it has been a success and has spread to all areas of local daily life. 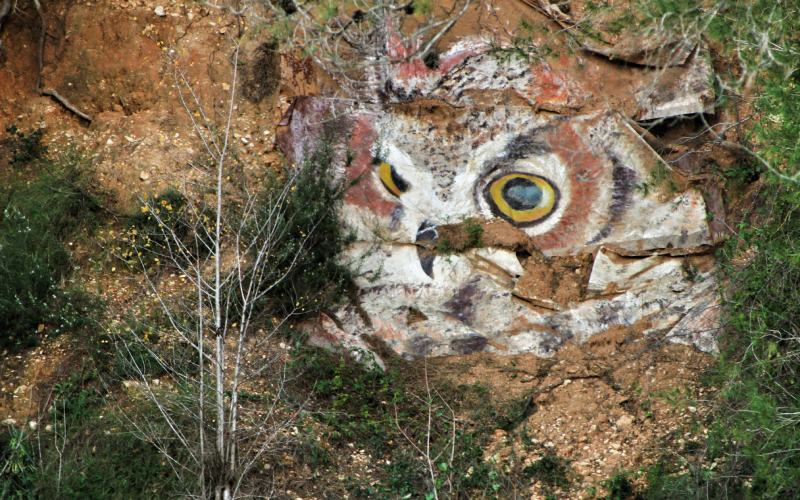 A work of Biodivers in Carrícola. | Shutterstock

From the village itself there are routes where you can enjoy the sculptures and artistic expressions of the Biodivers project. One alternative is the aforementioned water route which passes through ravines and arcades of Muslim origin. Another is the route around the castle, which takes you up the slope to the castle and then climbs even higher. Despite this, it is easy to do and is less than four kilometres long. The peculiar works on display are combined with great panoramic views of Carrícola and the Albaida valley.

The town’s main place of worship is also linked to Carrícola’s Moorish past. The church of San Miguel was erected on the site of the old mosque. In 1535 the Muslim building became a Christian temple; due to the conversion decrees issued by the kingdom. Later, in 1572, it was consecrated to the saint to whom it is dedicated today. During its history it has been modified and therefore its appearance is eclectic. 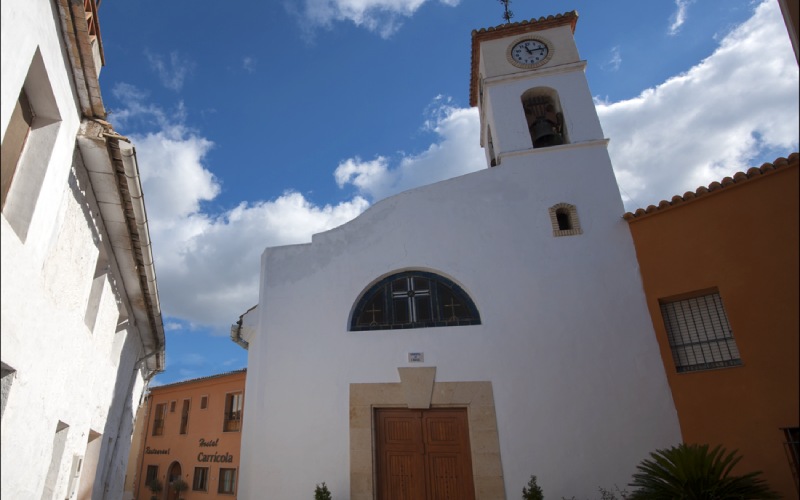 Its façade, as well as almost the entire exterior, is whitewashed. Its simplicity is extreme and the curious undulating shape of its upper part stands out. On one side stands a tower with a bell tower and clock. The interior is dominated by a mixture of neoclassical and baroque styles. The most outstanding work in the church, a sculpture of the church’s patron saint, is in this style. It is a polychrome wooden Saint Michael. Made between the 18th and 19th centuries, it presides over the main altar. 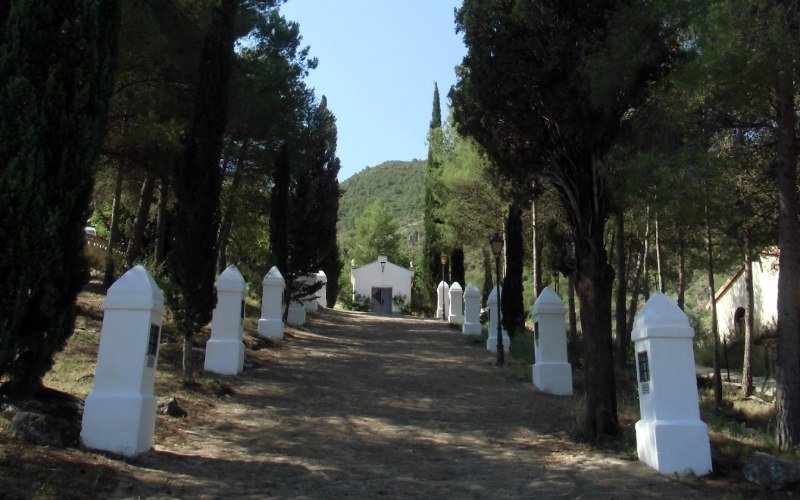 In addition to the church of San Miguel, another local temple is worth mentioning. El Cristo del Calvario hermitage is a very simple whitewashed structure. It houses a nineteenth-century crucified Christ and is located under the gaze of the castle of Carrícola. On the outside, there is an access path with cypress trees and a series of small huts in which the Passion of Jesus Christ is represented through ceramic pieces. Thus, the whole is presented as a space of great harmony.

castles, churches, hiking, parks and gardens, Valencia, Valencian Community
It may interest you...