The Columbretes Islands are four groups of volcanic islands located 48 kilometres from the province of Castellón. Qualified as a Natural Reserve (19 hectares), while the waters that bathe them are a Marine Reserve (5,500 hectares). The origin of these islands dates back to approximately two million years ago. The changes produced in the earth’s crust all along the Mediterranean coast gave rise to their origin. 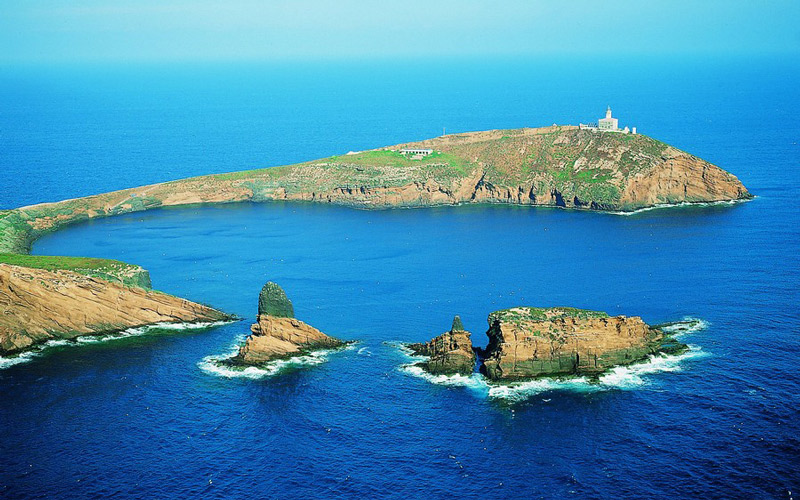 Thus, the Columbretes Islands are made up of a total of four groups of volcanic islands, the most important of which are Columbrete Grande, Horadada, Ferrera and Bergantín. The islands lie on 80-metre deep sea beds and cover a space of three nautical miles in which volcanic craters and chimneys abound. The geomorphology, fauna and vegetation found here are subordinated to the activity of the sea, sculpting the landscape of the islands. It is one of the three natural spaces that the city of Castellón de la Plana treasures.

The four groups of islands in the Columbretes Islands Nature Reserve are separated from each other by several miles in the middle of the Mediterranean, offering a visually appealing spectacle. According to the regulations of the park, it is the only island that can be visited. The boats that take you to the island depart from Castellón de la Plana, Oropesa del Mar and Peñíscola. 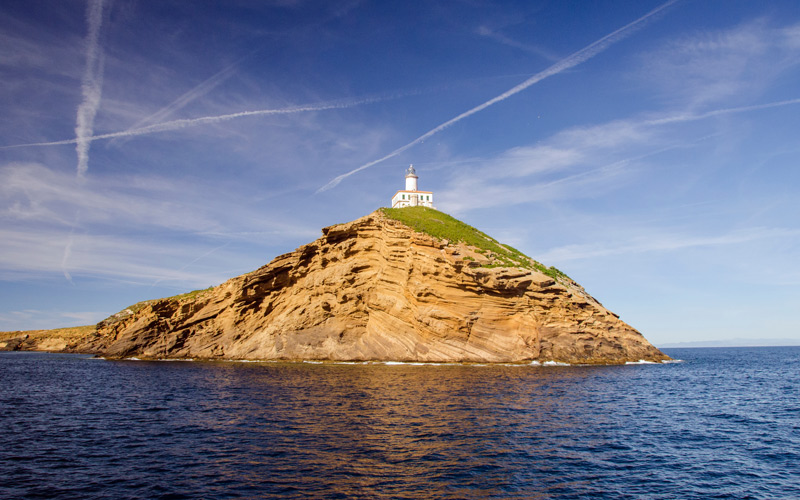 The island Columbrete Grande, also called Columbrete Mayor, is the largest of all these islands. Its origin corresponds to the ancient remains of chained craters, the result of great underwater volcanic activity. It has a half arch shape that covers approximately one kilometre. The two ends of the Grande Island are also the two highest. At one of these ends is the lighthouse, which thanks to this infrastructure is 67 metres high, providing optimum visibility for boats to reach it. At the other end is the cemetery, with 11 tombs in which the lighthouse keepers and their families who died while on the island are buried. The lighthouse is currently automated. 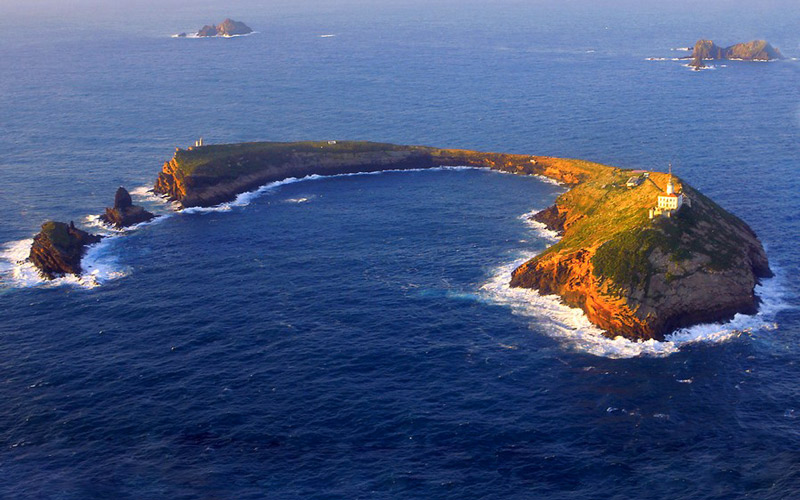 It is one of the favourite destinations for divers, as under its waters there is a great variety of marine species. Before being an island dedicated to tourism, at the beginning of the 19th century pirates and smugglers took refuge here.

Columbrete Grande is known for having a considerable population of Iberian wall lizard or Columbretes lizard, being the only endemic vertebrate of the Valencian Community. In addition, specimens of species such as the Audouin’s gull or Eleonora’s falcon can also be found here.

The second group of islands is made up of three, and the main one is called La Horadada, a name that is due to the large cavity it has. This island is not even half the size of Columbrete Mayor. The other two islands found here are Isla del Lobo and Méndez Núñez, the latter being the smallest of the three. This way, Columbrete Grande would be to the southwest, La Ferrera to the north of La Horadada and to the south the Bergantín. 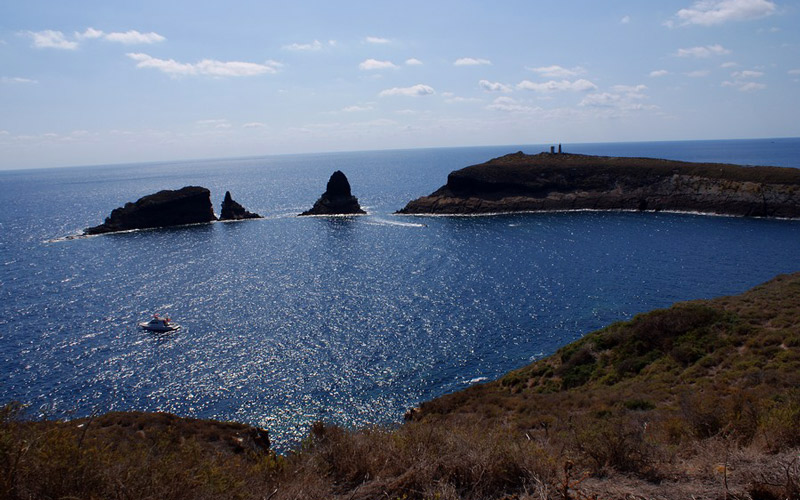 The third group of islands is “commanded” by La Ferrera, also known as Malaspina Island. A mini archipelago made up of eight islands, although some are just large rocks. The most prominent are La Ferrera, Bauza, Espinosa, Navarrete and Valdés. In La Ferrera, the last remains of original vegetation are preserved, such as the palmetto, lentisk and sarsaparille.

Finally, the islets whose main attraction is El Bergantín. Made up of about ten islands, the other most notable are Churruca, Cerqueiro and Baleato. Like the rest of the Columbretes Islands archipelago, it belongs to Castellón de la Plana. Its 32 metres above sea level correspond to the remains of the central chimney of a thousand-year-old volcano. 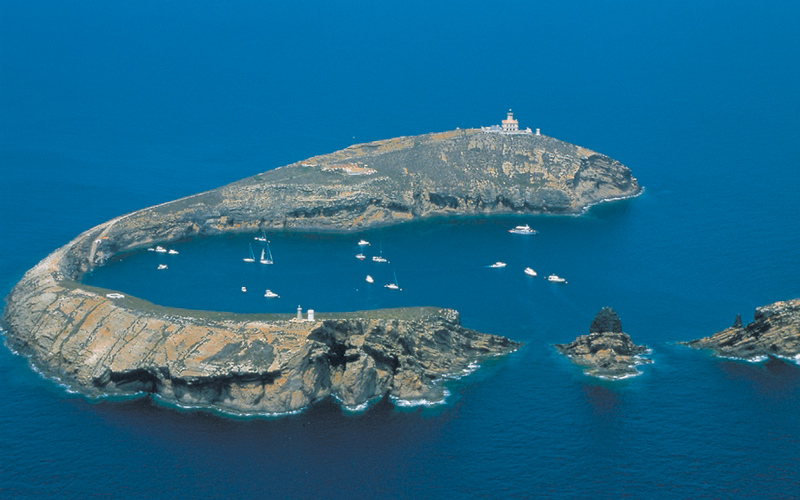 The name Columbretes was chosen by Roman and Greek navigators when they noticed the large number of snakes that inhabited the main island, and they included them in their charts under the name Ophiusa or Colubraria. However, in the mid-19th century, an arson attack was launched to destroy them.

Columbretes Islands are a perfect example of the high geological activity that the area experienced many years ago. The islands have many craters, and the remains of the chimney of an extinct volcano can also be seen.

The real colonization of the Columbretes Islands took place between 1856 and 1860, when the lighthouse was built with the aim of guiding the boats that passed near the islands during the night. 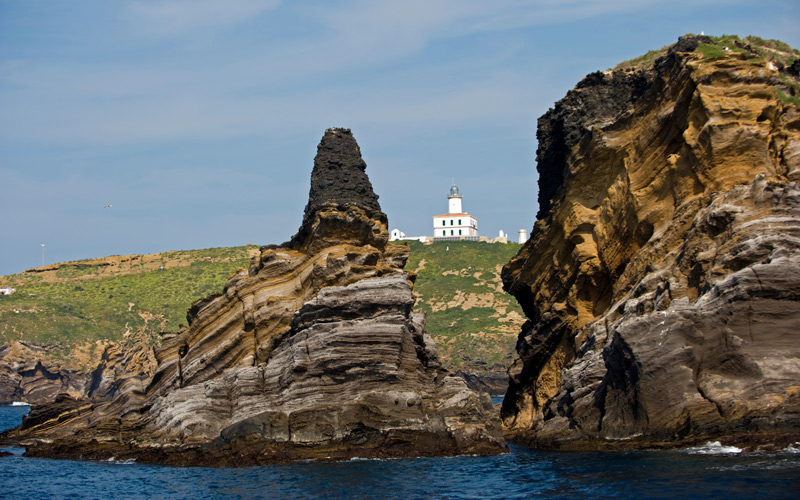 Nowadays the Columbretes Islands are destined to tourism. The boats take visitors to observe the beautiful landscape and the diversity of animal and plant species that live here. In addition, these islands are a highly coveted destination for scuba diving lovers, highlighting the beauty of their seabeds, the transparency of their waters and the large amount of fauna and flora they are home to. This is due to two factors. Firstly, the 30 miles that separate the Columbretes Islands from Castellón. Second, to the characteristics of these small volcanic islands. Both provide a means of protection for the seabed.

Thus, in the depths there are laminaria algae, which are very rare in the Mediterranean, and red coral. These sea beds are also a Marine Reserve, helping the regeneration of numerous species such as the lobster.

Castellón, islands, Valencian Community
It may interest you...

The 9 best beaches in Spain
Spain is undoubtedly a country with dreamlike and very special landscapes.