The Capital of the Kingdom and Contemporary Art

Pamplona is the capital of Navarre and it used to be the capital of the old Kingdom there. It is famous by its running during the San Fermín Festival; however, it is also one of the most important contemporary art centers in Spain.

Plan your stay in Pamplona

This city has become a complete tourist destination. Things to do in Pamplona normally involve visiting the contemporary art centers and museums such as Oteiza Museum. However, this city attracts thousands of visitors thanks to its running during San Fermín Festival. Some destinations nearby Pamplona are also worth to go: Puente la Reina, Estella and Lumbier with the famous Monastery of Leire. The best way to have access to the old town of Pamplona is Magdalena Bridge, a medieval construction that is used as the entrance to the city for the pilgrims of the Camino of Santiago. The main historical sights are located in the old town, whose nerve point is the Castle Plaza. Here we find the famous Kiosk of Pamplona.

Religion and Pamplona go together many times. Santa María’s Cathedral is a Romanesque construction that was restored as a Gothic building in the 14th and 15th centuries, and the façade which is is neoclassicist. The Diocesan Museum is also interesting because of it sacred collection.  San Cernín Church was the center of the old Pamplona. It is named after the patron saint of the city, St. Cernín. Do not miss San Nicolás Church either, 12th century, whose external aspect reminds us of its defensive role in the past. San Lorenzo church keeps the image of the saint that is taken out in the procession during San Fermin Festival.

Regarding non-religious sights, the City Hall was built in 1423. We also need to highlight Navarra Palace from the 19th century, the Bullring and the Tribute to Ernest Hemingway. Saraste Promenade is one of the main streets of the city, linking the old town with wider parts of the city. Here you can see several scuptures of Navarre kings. However, the most symbolic monument is the Monument to the Fueros (19th century), which has a female figure holding on her left hand a representation of the regional laws of Navarre. On the base of the sculpture we have allegories devoted to Work, Independence, Peace, Justice and History. This promenade finishes in the Citadel, an impressive military fortress built in 1571. It houses several exhibition rooms. 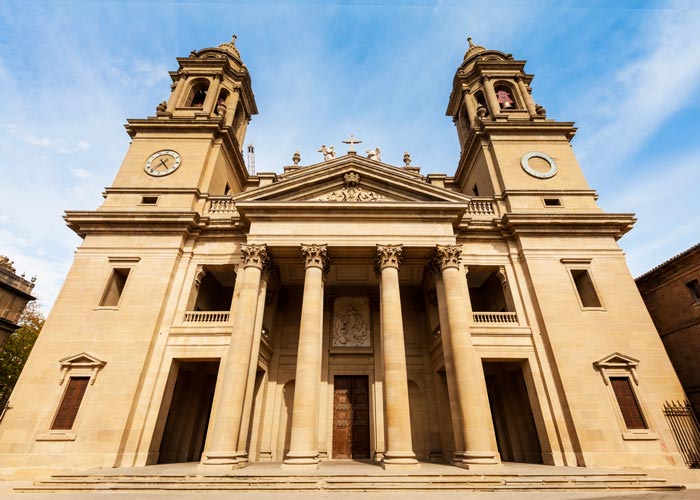 Pamplona has numerous and important museums and art and culture centers. To get to know better the interesting history of Pamplona and the Navarre Kingdom, we highl recommend you visiting the Navarre Museum. This center teaches you about the heritage sites of the city since Prehistory to the contemporary era. Among the pieces to be noticed, you should not miss the famous Arqueta de Leyre, a small coffin keeping several hunting weapons. Another interesting thing to do in Pamplona is visiting its Planetarium, which is the main scientific center for exhibitions. You will also love the Baluarte Auditorium and the Huarte Contemporary Art Center.

In the outskirts of the city we find the university campus and the University Museum (which has more than 14 000 photos): do not miss the legacy of one of the best photographers from the 20th century, José Ortiz Echagüe. Finally, you should not miss Jorge Oteiza Foundation: a collection of 1650 sculptures. It is the best place to enjoy the most modern museography.

8 fascinating villages in Navarre
[vc_row][vc_column][vc_column_text]Navarre is a community filled with heritage treasures. Architecture, sculpture and painting have developed through Más información

Things to Do in Vera de Bidasoa-Bera
[vc_row][vc_column][vc_custom_heading text="On the Banks of the Border River" font_container="tag:h2|text_align:left|color:%23000000" google_fonts="font_family:PT%20Sans%20Narrow%3Aregular%2C700|font_style:700%20bold%20regular%3A700%3Anormal"][vc_column_text]On the banks of the Bidasoa Más información