The Capital City of La Ribera

The second biggest city in Navarre with an attractive cultural heritage. In addition, it is famous for the high-quality goods it produces from its orchard.

Planning Your Trip to Tudela

The first thing you have to see in Tudela is Santa María Cathedral, but there are other buildings and museums that can take an entire day. This city is the closest to the impressive Bárdenas Reales Park. If you are a bird lover, you can also go up to the Laguna de Pitillas Park. One alternative is to follow the N-232 to visit the Riojan town of Alfaro, from which you can later go down to the monumental and Balnearean town of Fitero. Discover all the wonderful restaurants and hotels in Tudela in our pages about eating and sleeping in Tudela.

Despite the existence of archeological remains from the Iron and Roman Ages, the main development of Tudela did not really take off until the Moorish domination. At the beginning of the 9th century, an important medina was erected, dominated by Armùs ben Yusuf, governor of the Marca Superior.

A century later, Tudela fell to the Banu Qasi dynasty, leading to its Golden Age. Its ruler, Musa ibn Musa was considered the “third king of Spain” after Abd Al-Rahman II and Ordoño I of Asturias. For five years, Tudela was an independent Taifa kingdom that coined its own currency.

In 1119, Tudela was conquered by the Navarre-Aragonese king Alfonso I the Battler, which meant that it fell under the jurisdiction of Nájera. But with his death in 1134, Tudela was incorporated into the kingdom of Pamplona, and it has been a part of Navarre since then.

During the 12th century, the Navarre monarchs favored this town highly. Sancho VI the Wise made it his permanent winter residence. Such stays led to the birth in the town of the future Sancho VII the Strong. This Tudelan king exercised the principal sponsorships during his reign.

King Charles III made the village a city in 1390. It was a city that was controlled by the Agramontese lineage. At the time of the Castilian invasion of 1512, they withstood a difficult siege until September 9th, the day on which they surrendered. The king Ferdinand the Catholic decided to win over its inhabitants by going to the city himself to swear their jurisdiction on October 4th. The following year he granted the city the title of “Very Noble and Very Loyal” despite being a focus of insurgents. 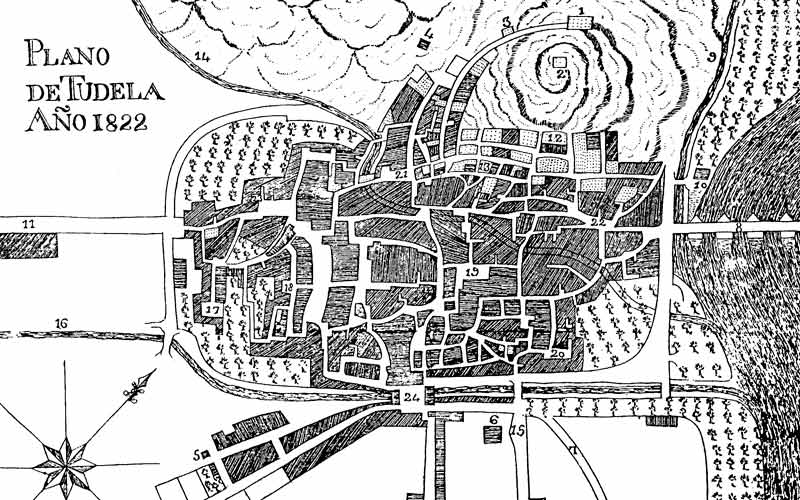 In 1516, the Court of the Inquisition was settled in the city. It had previously been in Pamplona, but Tudela was deemed safer. However, this privilege was not enough to end the rebellion. It was one of the cities that rose up against the Castilian domination in 1521, supporting the third attempt by the Albrets to recover the territory. A few months later, it fell back into the hands of the Castilians.

After the expulsion of the Moors in 1609 by Philip III, various religious orders were settled in the city during the 17th and 18th centuries. In 1808, in the midst of the Independence War, the Battle of Tudela took place. The city was made a point of interest for the French invaders because of its strategic position near Zaragoza. Napoleon’s victory in Tudela was reflected in the Arc de Triomphe in Paris.

Later, Tudela began to develop a flourishing economy based around its orchards. Little by little, it became one of the most prosperous villages in Navarre thanks to a strong horticultural industry that really took off in the 1950s.

Things to Do in Tudela

The main monumental attraction to see in Tudela is the Santa María Cathedral, built in 1180 over the old Mezquita Mayor. It was collegiate until it was incorporated into the Diócesis de Tarazona. Its Puerta del Juicio Final stands out with its heavily decorated eight columns and vaulted arches.

The current tower is from the 17th century because the original one collapsed. The Museo de Tudela is located in its cloisters and the dependencies of the annex Palacio Decanal, from the 15th century. Here, you can see diverse archaeological artifacts and pieces of sacred and worldly art. It displays a painting on a table, El Juicio Final, which is attributed to El Bosco and several canvases of the Baroque painter Vicente Berdusán.

The Church of La Magdalena is the best display of Romanesque art in the city. Built in the mid-12th century, it is highlighted by its principal door with four sculpted vaulted arches and an interesting Pantocrátor in its tympanum.

The Church of San Nicolás was a Romanesque temple that has been completely remodeled in the Baroque style in the 18th century. The tympanum of the main entrance shows an interesting stone representation of the Holy Trinity. This church was the first tomb of Sancho VII, before his body was moved to Roncesvalles. 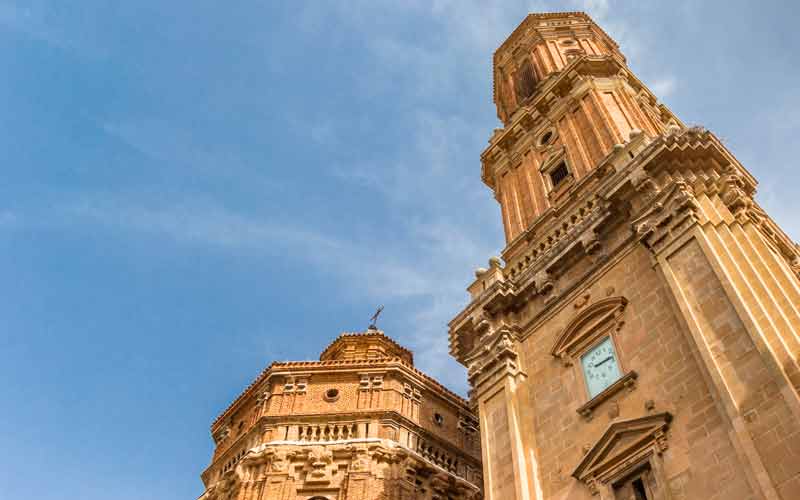 The other great temple in Tudela is the Church of San Jorge el Real, a Mannerist construction from the 17th century. It passed into the hands of the monarchy, which is why “El Real” is in its name. In its interior, it guards a main altarpiece from the 18th century and two oil paintings by Vicente Berdusán.

In the cloister, you can find the Edificio Castel Ruis, the ancient Jesuit convent, which is currently the cultural center and the site of the Museo Muñoz Sola, which contains an interesting collection of French paintings by César Muñoz Sola. 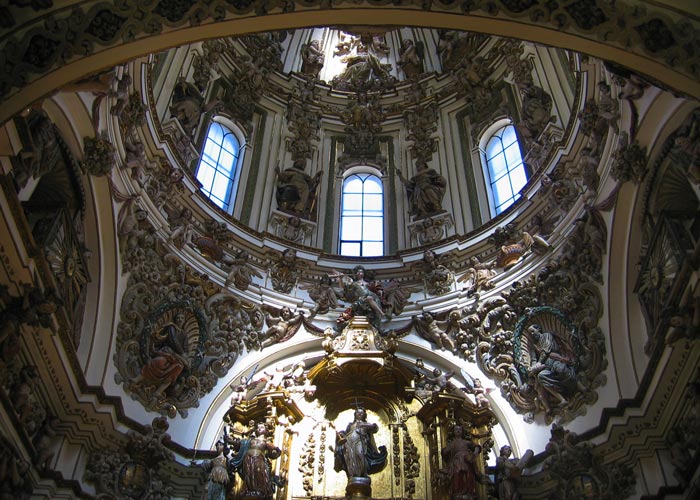 The Palacio del Marqués de Huarte is a Baroque building built on the foundations of the ancient walls. Its façade is decorated with murals from the 18th century, and its interior has a magnificent central courtyard with a Baroque staircase.

Another unique building is the Palacio de San Adrián, the historic residence of the influential family Magallón, Marquis of San Adrián. It was constructed in the 16th century, and its façade displays the wooden eaves with figurative motifs of vegetation. Its central courtyard is full of Grecian mythological murals. Finally, it is also worth seeing the Plateresque façade of the Casa de Almirante, with the figure of Hercules with the anthropomorphic representations of Virtue and Vice.

In the surrounding areas, you find the Bardenas Reales Natural Park, an enormous expanse of semi-desert upon which time and wind have wrought capricious forms of great geological value. When it comes to food, Tudela is known for its goods produced from an orchard in which delicious vegetables grow. The most famous are the asparagus and the artichokes.

You can find parking in the Plaza de la Constitución, the Camino de San Marcial, or the Plaza San Salvador.

churches, museums, Navarre
It may interest you...