More than 650 million passengers visit Madrid‘s 302 Metro stations every year. Beyond origin or destination, both Madrid citizens and tourists make use of this underground transport network. A daily procedure in which sometimes details are overlooked. For example, that under Tirso de Molina there is a cemetery or the history behind the names of its stations is something that is not always known. So here is why nine of its most famous stops are named as they are. 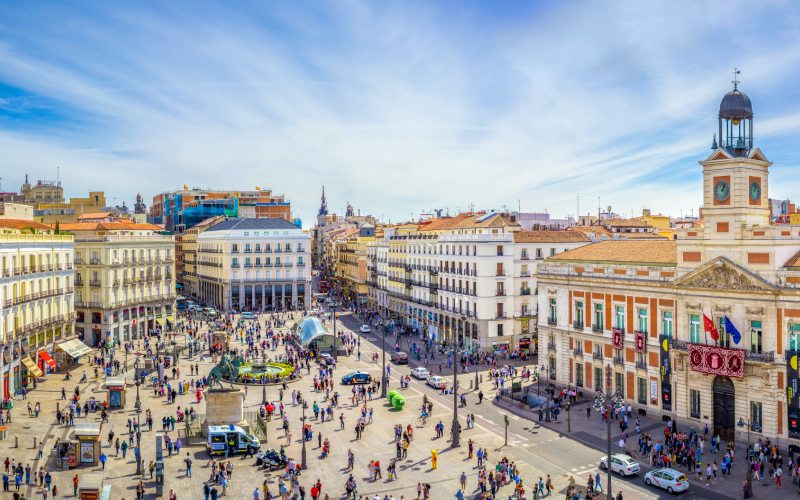 Sol with its Metro and Cercanías stations. | Shutterstock

Located under the centric Puerta del Sol, it is the busiest station in the Madrid underground, with 22 million passengers a year. It retains the same name that was given to it a hundred years ago, which in turn comes from the square where it is located. In the time of Charles V, the place was fortified due to various types of altercations. One of the access doors to the place stood out because it had a sun and so it became known that it would end up being the nerve centre of the city.

Its name has always remained intact, with two criticised exceptions, motivated by the economic needs of the management company. In 2012, a famous mobile phone company signed a one-week sponsorship agreement that renamed the station “Estación Sol Galaxy Note”. The operation would be repeated a year later with another phone company. The latter changed the name of the station to “Vodafone Sol” for three years. 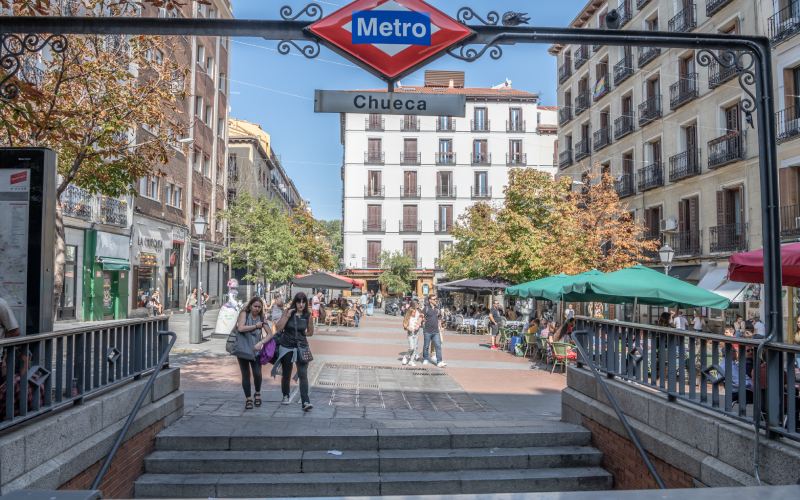 With the same name as one of the most famous districts in the centre of Madrid due to the gay community that lives there, the Chueca station is named after the Madrid composer Federico Chueca, one of the great representatives of the “género chico”, zarzuelas in one act. He was also the co-creator of the zarzuela “La Gran Vía”. In 1943 the Madrid City Council dedicated to him the square where the station is located, which came into operation in 1970 as part of Line 5. 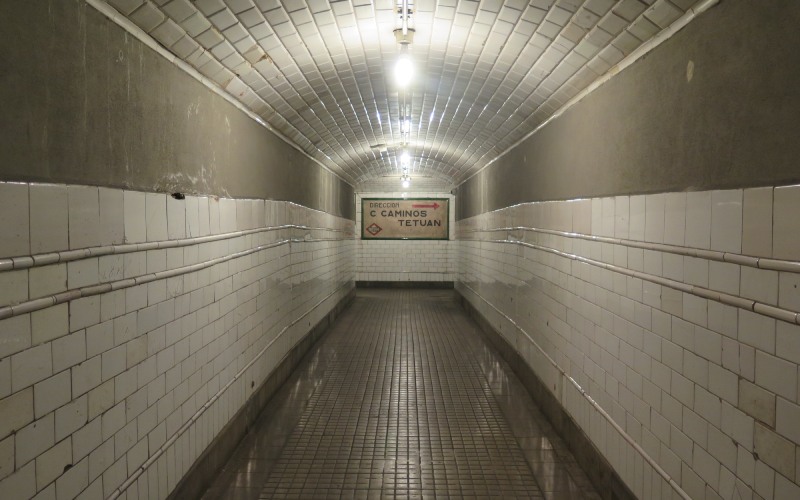 The Spanishisation of the French place name Chambéry during the War of Independence led to one of the most traditional names in the capital. This station located under the homonymous square has the honour of being the only ghost station of the Madrid’s underground. Located between Iglesia and Bilbao stations, it was one of the first eight stations built on the first line of the Madrid underground, inaugurated in 1919.

In 1966, due to the need to increase the capacity of the then Line 1, it was decided to close it due to its proximity to Iglesia station. It remained hidden for over forty years until it was rescued as a museum space. Today it can be visited and has many of the everyday objects of that period. 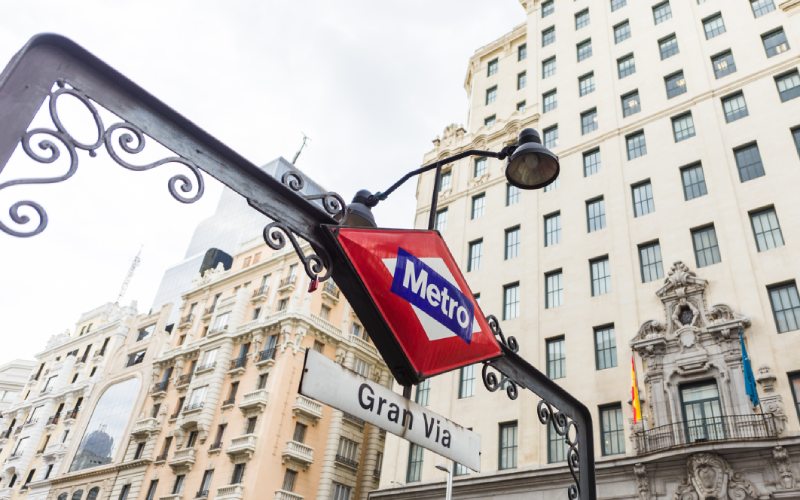 During the forty years of dictatorship, despite its famous location, neither the Metro station nor the street was named after the so-called Spanish “Broadway”. Franco’s government renewed by decree many of the names of the stations and public places to exalt their leaders. This is why the Gran Vía station, which had been in operation since the inauguration of the first Metro line in 1918, was renamed José Antonio in 1940, in homage to the founder of the Spanish Falange. Both the street and the station recovered their original name in 1984.

There are many stations along the four-kilometre-long Avenida del Príncipe de Vergara in Madrid, but only one of them is named after the street. Inaugurated in 1924 with the extension of line 2, it was named after the noble title granted to Baldomero Espartero, an essential figure in 19th century Spanish history. In 1939 the station and the street changed their name to General Mola, a military man who instigated the 1936 coup d’état that led to the Civil War, and who died in an air accident a year later. As in the case of the Gran Vía, the original names were changed in 1984. 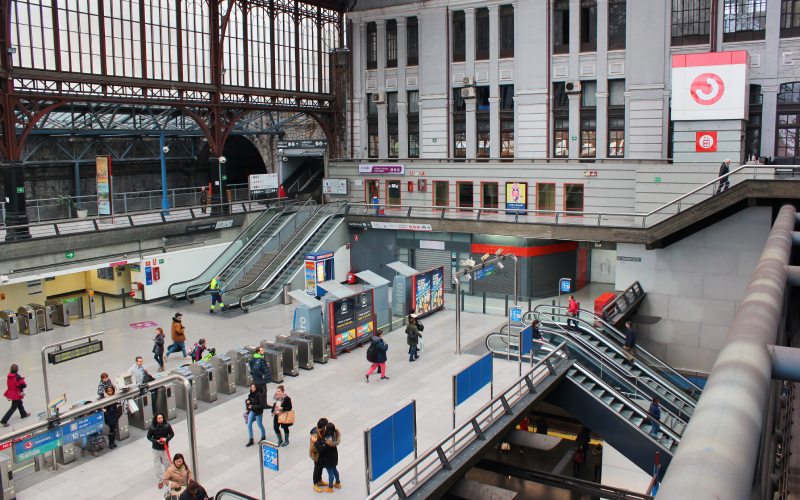 On the other side of the Ramal is the Príncipe Pío station and intermodal station. It is named after the Italian military man and aristocrat Francisco Pío de Saboya y Moura. Apart from holding many positions in the Spanish Crown, he was the owner of the mountain located next to the station, which was popularly given his name and which currently houses the Temple of Debod. The historical name was always Estación del Norte, as it was the starting point for the trains to the north of the peninsula until the start of the Chamartín station. In 1995 it was renamed with its current title.

Argüelles station is named after the Spanish politician and diplomat who tutored Queen Elizabeth II. Agustín de Argüelles, known as “El Divino”, was a prominent figure in the first half of the 19th century. As such, his name was proposed to name one of the districts that would lead to the construction of the Ensanches in Madrid, also giving the station its name since its construction in 1941. 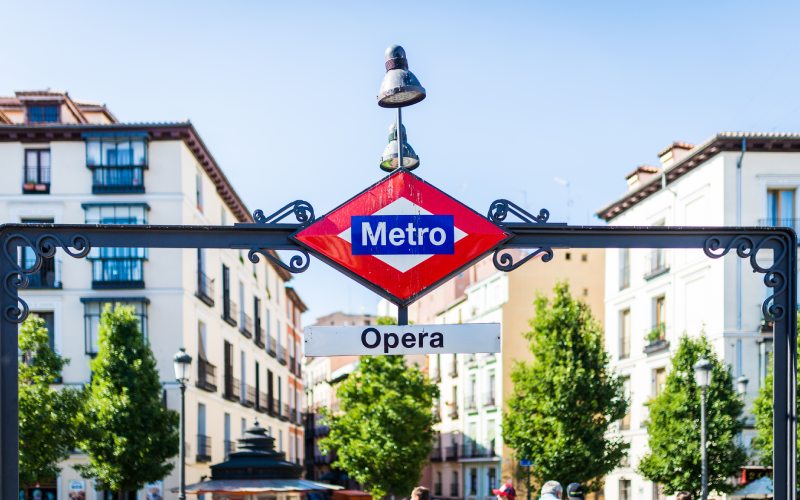 The Ópera station, the head of the curious branch line operated by Metro de Madrid, has changed its name many times. It was inaugurated under the name of Isabel II, in honour of the queen who also gives her name to the square on which the station is situated. It leads to the Teatro Real, one of the most important cultural venues in the country that gave rise to its current name.

However, the establishment of the Second Republic resulted in a decree that forced the withdrawal of all those monarchical names. For this reason the station was renamed Ópera, a name that would not last long. Six years later it was known as Fermín Galán, a republican military man, who would name the square until the arrival of the Franco regime. From then on, Ópera was definitively imposed and it still remains to this day. 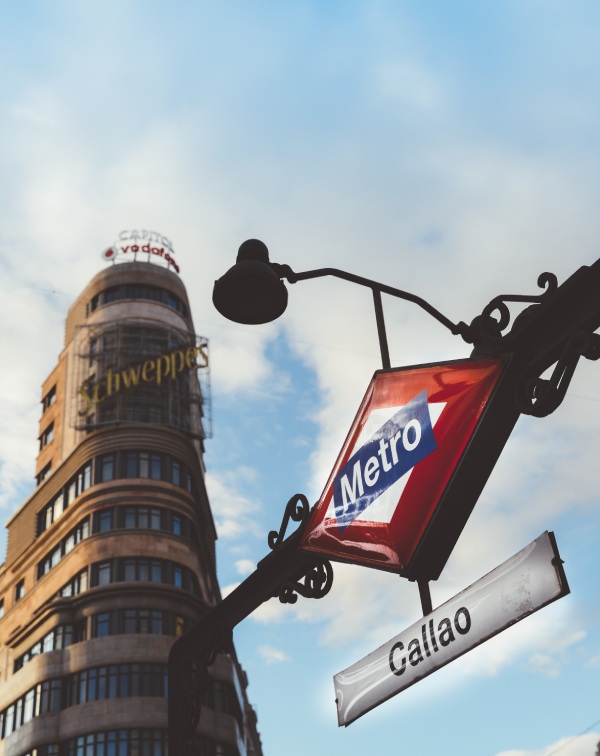 Located in the commercial heart of Madrid, the Callao station is situated under the square that forms the Gran Vía and the streets Preciados and Jacometrezo, and which bears the same name. The origin of this name dates back to 1910, when it was a tribute to the confrontation that took place in the Peruvian port of Callao on May 2, 1866. It was between a squadron of the Spanish Navy and the defenses of Callao representing the Peruvian Republic, in the context of the Spanish-South American War. But it was not until 1941 that the Metro arrived in that space. It did so by means of line 3. Three decades later, Line 5 would follow. 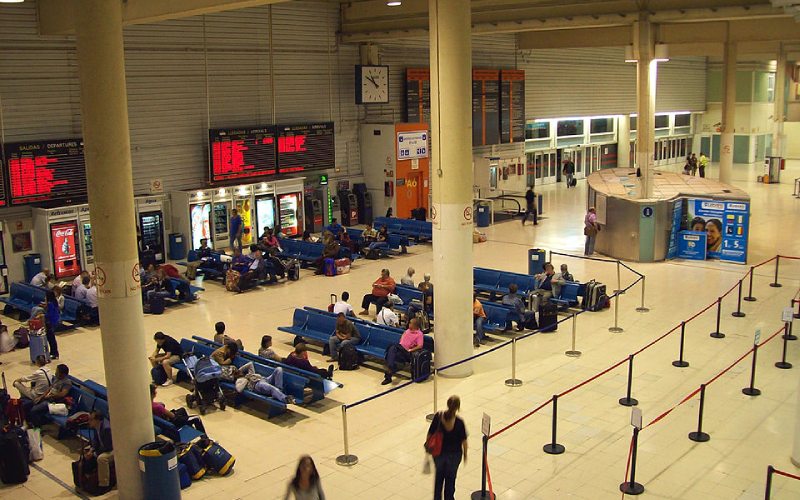 Contemporary to Argüelles was Méndez Álvaro, ephemeral mayor of the capital, whose baton he held for only one month. A politician, doctor and writer, his outstanding public life and work at the service of institutions led him to give his name to a street in Madrid. It is also the most important bus station in the capital and a stop on the Cercanías.

Taking the train and getting off two stops further on is one of those curious place names, whose origin is unknown to many. The Conde de Casal station, a reference point for the southeast of the Community of Madrid, is named after the square just above it. It is dedicated to Manuel Escrivá de Romaní y de la Quintana, the tenth Count of Casal. This noble title was granted in the 17th century to a Valencian family that was consolidated at the top of the Spanish aristocracy. An academic trained in history and art, Escrivá de Romaní was a senator and the first deputy mayor of Madrid City Council. After his death the square was given a name, which still preserves it. 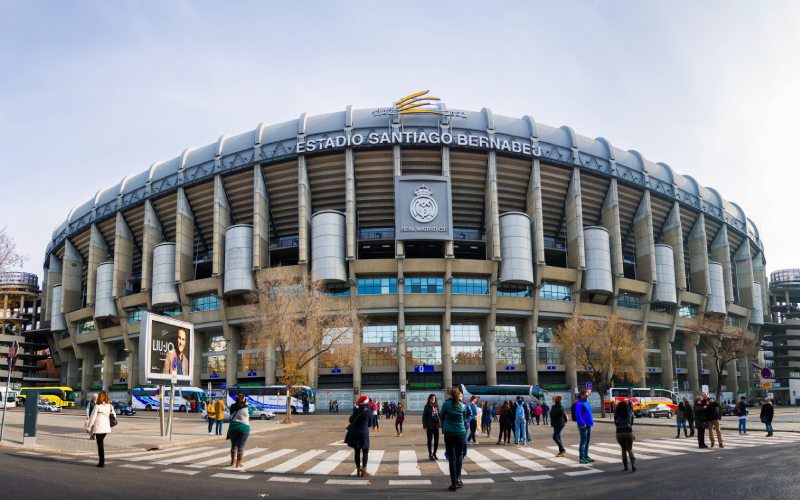 Santiago Bernabéu Stadium, which shares its name with the Metro station. | Shutterstock

Any football fan will quickly identify the character who gives his name to this station on line 10. Football player, coach and president for 35 years, the name of Santiago Bernabéu is intimately linked to Real Madrid. Considered the first big star of the club, his institutional role at the head of the club gave him the charisma and recognition of his fans, giving name to the until then Chamartin Stadium.

On the occasion of the 1982 Football World Cup, a new extension of the underground system between Fuencarral and Avenida de América was carried out, locating a new station under the Plaza de Lima with the same name. Twelve years later, line 8 was joined to line 10 (Aluche-Alonso Martínez) by means of a new tunnel under the Paseo de la Castellana, at which time the station was renamed Santiago Bernabéu.