Kilometer zero and the street that never sleeps

The heart of the Madrid owes its name to one of the ancient entrances to the capital, facing east, where the sun rose. For its part, the Gran Via is the result of urban intervention of almost kilometer and a half to communicate the center with the northwest of the city. It is a very lively area with many catering establishments.

Plan your visit to Gran Vía and Sol

It is written that, between Puerta del Sol and Gran Vía, there were more bars than throughout all of Norway; this gives an idea of ​​the many catering establishments that exist in the traditional and tourist center of Madrid. This is a pedestrian area where it is better to leave the car in a parking lot. Close by, you will find the Art Walk and the Barrio de las Letras to the west, Lavapies to the south, Barrio de los Austrias to the west and Malasaña and Conde Duque to the north.

History of the Gran Vía and the Puerta del Sol

The history of the Town and Court of Madrid is full of great events. The Puerta del Sol was the original eastern entrance to the city, built in the time of the commoner revolution against Charles I. It was originally one of the entrances of the fence that surrounded Madrid in the XV century.

In the stands of the former convent of San Felipe Real, was one of the most famous meeting places in the Madrid Golden Age, where the upper class learned the news of Madrid and its people. The place did not acquire configuration square until the mid-nineteenth century, when the old Post Office building became headquarters of the Ministry of the Interior and tore down some of the surrounding buildings, including the convent itself of San Felipe El Real.

The Puerta del Sol and its surroundings have been the scene of important events such as insurrections in the sixteenth century, the mutiny against Godoy, prime minister of Carlos IV, through the mutiny of Esquilache, the struggles of Dos de Mayo against Napoleon, or the repatriation of Fernando VII. Today, with its irregular structure, it is a hub frequented by walkers, locals, and tourists. It also maintains its clear leadership as a place of loud expression of social discontent, scene of weekly demonstrations of all kinds. 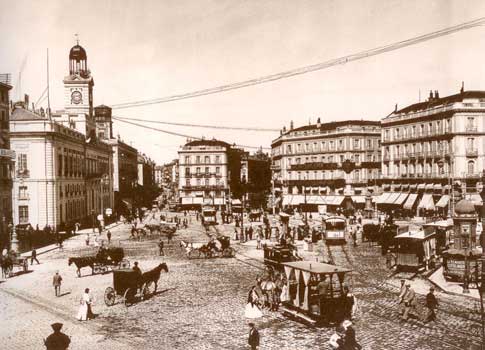 The Puerta del Sol around 1900

What to see in Gran Vía and the Puerta del Sol

The first of the 10 areas we propose for our visit to Madrid is Sol and Gran Vía, in the heart of the city. Its streets, the most visited of the capital, are a constant buzz of people, local and foreign.

The most important and oldest building in the Puerta del Sol is the Casa de Correos, now headquarters of the Presidency of the Community of Madrid. Built in 1768 as a central post office, it is the venue chosen by many locals and tourists to welcome the New Year and eat the twelve grapes to the chimes of its famous clock, built the building in 1856. In front of the Post Office, a plaque on the ground marks the zero kilometer, origin of the Spanish radial roads. At the eastern end we find the bear and the tree (sculpture of a bear sniffing the fruits of a strawberry tree), subject on the shield of the city of Madrid. At the other end, next to the Arenal street is a replica of La Mariblanca (sculpture of Venus on a column) that was originally on a fountain in the square itself. Another icon in the Puerta del Sol is the neon sign of wines Uncle Pepe, work of Luis Perez Solero.

Then we drive to Alcala Street, center of social and commercial activity of the city in the nineteenth. Here is located the Real Academia de Bellas Artes de San Fernando, a palace built by Baroque architect José de Churriguera for political and Navarran businessman Juan de Goyeneche. The collection of paintings the museum has great masters of Spanish art, among them Italian and Flemish, Zurbaran, Ribera, José and Federico de Madrazo and the only Arcimboldo preserved in Spain. It is also represented the twentieth century with works by Picasso, Juan Gris, Joaquin Sorolla and Ignacio Zuloaga, among others. The museum also offers a collection of sculpture from the seventeenth century to the present, with pieces by Pedro de Mena, portraits embossed Gian Domenico Olivieri, works of Mariano Benlliure and Miguel Blay etc.

As you walk down the street of Alcala to Cibeles, we must not forget we look up into the sky, to see the stunning view of the chariot crowning the building of the Bank Bilbao (now BBVA), image of strength and power emerged from the hand of Higinio Basterra. A little further on is the Church of the Calatravas (s. XVII), at number 25. It is the temple of the ancient Monastery Real de la Concepción, better known as the Comendadoras de Calatrava.

At number 42 of this street is the Circulo de Bellas Artes, an art institution founded in April 1880 through the efforts of a small group of artists. The Circle went through several previous to the current headquarters, which is the work of Antonio Palacios and was inaugurated in 1926 with an exhibition of paintings by Ignacio Zuloaga. Among its directors included some key figures from Spain in the early twentieth century, as Jacinto Benavente. By painting their classrooms passed artists like Pablo Picasso himself and Ramon Maria del Valle-Inclan frequented for years their classrooms, establishing there a modernist coterie. Currently, the Circle is a dynamic center for exhibitions and cultural activities, including conferences, courses, presentations, film screenings and performances.

From here we can approach the Zorrilla Street, where the Museum of the ICO Foundation is located, with an interesting collection of contemporary art, mainly Spanish, and a varied exhibition offer. Parallel to the Carrera de San Jeronimo is the Palace of the Parliament, better known as the Congress of Deputies (1843-1850). Neoclassical, the project was designed by architect Narciso Pascual Colomer.

In nearby Jovellanos street is the Teatro de la Zarzuela, the main stage of the Spanish lyrical genre. The original building, opened in 1856 according to plans by Jerome Gandara, was rebuilt after a major fire in 1908 and remodeled several times finally recovering much of its original structure. Very close, back in the Carrera de San Jeronimo, is the the Thyssen-Bornemisza Museum (a personal favourite) and the Fountain of Neptune.

At number 8 is the historic restaurant L’Hardy (1839), with its elegant Second Empire style, where you can make a short stop. A little later we find another local centennial, the Mira House (founded in 1842) specializing in nougat, marzipan sweets and delicacies made, among others, by Indalecio Prieto and Gregorio Maranon.

At kilometer and a half extending from the confluence of the Gran Vía with calle de Alcalá to the Plaza of Spain, an almost unfathomable universe of leisure opportunities, cinemas and theaters, restaurants, department stores and fashion shops it is concentrated , books, music or films; office complexes, hotels … And all this, in buildings made by the best Spanish architects of the mid-twentieth century. 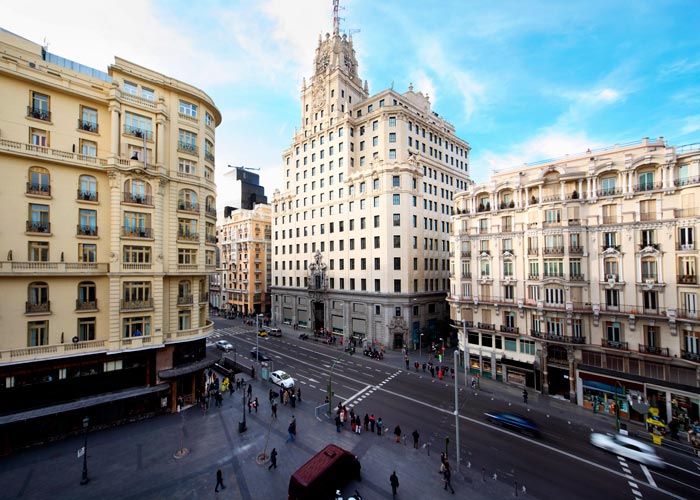 At the confluence of the Calle de Alcala and Gran Via it draws particular attention to the Metropolis building (1911), former property insurance The Union and the Phoenix designed by French architects Jules and Raymond Février. Slate dome crowned by the figure of Ganymede, is one of the most photographed of the Gran Vía, especially from the Plaza de Cibeles elements. One of the first buildings to rise, the number 1 of the Gran Via, was commissioned in 1915 by photographer and Basque businessman Luis Ocharán the Cantabrian architect Eladio Laredo. It is a spectacular building of eclectic style, now known as Edificio Grassy by the famous watchmaker Alexandre Grassi have installed on their low in 1952. A private museum houses his collection of watches.

At number 12 is the Bar Chicote (Chicote Museum now), specializing in cocktails. Opened in 1932, it is a magnificent example of Art Deco, where he has spent a long list of celebrities, including Dr. Fleming, Ava Gardner, Sophia Loren and Orson Welles, among others. In the local it has been built a cabin for DJ’s. Meanwhile, in the odd part, at number 17, surprised the apse of the Oratory of Caballero de Gracia (1789), a neoclassical church built by Juan de Villanueva that because of the layout of the Gran Via, underwent various interventions, such as design of a new facade Carlos de Luque; by 1970 Feduchi Javier Benlliure built a large arch on the facade that left it the apse of the oratory.

The second tranche, to the Plaza de Callao, is characterized by a widening of the road, due to the proliferation of automobiles in those years. In this second phase have been installed today many fashion shops. Among its most unique buildings can highlight the Telefónica Building (1926-1929), at number 28. Work of Ignacio Cardenas, it was the first and tallest skyscraper in Spain and one of the first in Europe.

Later in the Plaza de Callao, the Palacio de la Prensa (1924-1928), designed by Pedro Muguruza commissioned by the Press Association of Madrid rises; It was also home to the famous humor magazine La Codorniz. Polygonal floor and brick facade has great influence on American architecture, recalling the Auditorium Building in Chicago, Louis Sullivan. In his low Palace Film Press is located.

In the third installment of the Gran Vía, characterized by buildings of rationalist and modern type, it highlights the Carrion Building or Edificio Capitol, with easily recognizable by its popular bright neon sign of the Schweppes brand expressionist facade, popularized in films like day of the Beast (directed by Álex of the Church). The building, designed by Luis Martinez and Vicente Feduchi Eced, was opened in 1933. It was the first hotel with apartments Madrid. The light of dawn of the silent summers on Gran Via has been immortalized forever in the paintings of Tomelloso, Antonio Lopez.

From Callao you can continue along the Gran Vía to the Plaza of Spain or end the tour in the area of ​​Sol-Gran Vía to the Postigo de San Martin, road Convent of Las Descalzas Reales, which occupies the old palace where Charles I and Isabella of Portugal and where he was born, in 1535, his daughter Juana of Austria which founded the convent of Discalced Franciscan nuns in 1559, and is buried in a chapel, presided over by his sculpture of Pompeyo Leoni. At the close the structure and many decorative elements plateresco palace is preserved. Inside works by Titian, Brueghel the Elder and Gregorio Montañés saved. Also important are the tapestries woven in Brussels from cartoons by Rubens, representing the Apotheosis of the Eucharist, commissioned by the Infanta Isabel Clara Eugenia. Nearby, in the Plaza de San Martin, you are the Casa de las Alhajas, former headquarters of the Caja Madrid Foundation, which has hosted temporary exhibitions.

We can end our tour with some shopping in business streets of Carmen, Preciados and Gran Vía. And finish the day in Labra House, famous for its tapas and croquettes as well as having been featured in the foundation of the Spanish Socialist Workers Party in 1879.

Five secret spots in central Madrid
No one doubts that Madrid is a city full of incredible and magical places. With Más información