This industrious city looks out onto the Atlantic Ocean and it is protected by the Cíes Islands. It is the biggest city in Galicia and it offers you beautiful landscapes, a rich gastronomy, and important cultural attractions.

Plan your stay in Vigo

Visiting Vigo can be done at any time of the year since the city’s weather is wonderful and there is always plenty of things to do. The atmosphere provided by the commerce in the area, the affluence of tourists, and university students also makes it  a fun place for many tourists. Next to the city you will find the Cíes Islands, and the epic Rande Strait. In less than an hour driving, you can see some other important landmarks such as Pontevedra (to the north) and A Guarda and Tui (to the south). Also, do not forget to try the yummy dishes Vigo offers you: both food and wine with certificate of origin of Rías Baixas.

What to see in Vigo

We recommend Vigo’s old city (declared Historical Tourist Interest) as a good starting point. There, you will find the Constitution Plaza, Praza Maior of Vigo, which is warm and full of cafeterias and terraces, and the Santa María of Vigo Collegiate Church (1816-1836), which is now the Co-cathedral of the Tui-Vigo diocese. It was constructed using a neoclassic style and was built upon the remains of the Gothic style church burnt down by the pirate Drake. It has three naves and it inside you’ll find the famous Christ of the Victory, which according to tradition, helped the people of Vigo during the Independence war. Nearby, you can visit the Stone Market, a unique place to buy and try the delicious oysters from Galicia. Vigo also stands out for its Romanesque centers: Santa María de Castrelos Church (12th century), Santiago de Bembrive’s Temple (13th century) and San Salvador de Coruxo (12th century).

The Alameda, a walking area next to the sports port, has some pedestrian areas and some gardens similar to those in Compostela’s Plaza, which coexists with the ruckus of the area with the liveliest nightlife of the city.

The most modern Vigo can be found in a triangle area formed by Puerta del Sol, Colón and Urzáiz. Puerta del Sol is the city’s nerve center, where you can see the monument known as ‘O Sireno’ as well as some other notable buildings such as the García Barbón Cultural Center. You can also walk around O Castro Park, the biggest city park, which is where the invasions of pirates and numerous battles have taken place in the past. This area also features really great lookouts, the Battle of Rande monument(commemorating some galleons’ sinking in 1702) and Santa María del Castro Castle (built between the years 1656 and 1667, now in ruins). 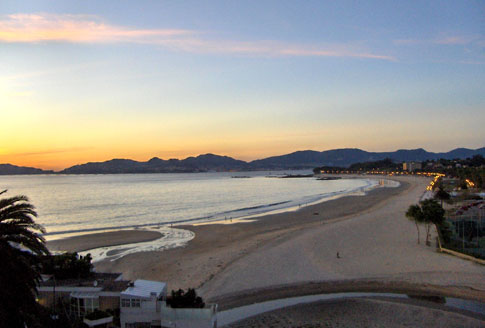 Museum options in Vigo have increased over the years. MARCO: the Contemporary Art Museum of Vigo, for example, is an art center devoted to the diffusion of movements and contemporary cultural proposals, especially the ones related to the art native to Galicia. Quiñones de León Municipal Museum, situated in the Pazo of Castrelos, is another option if you are interested in museums. Built in the 17th century and declared Historical-Artistic Monument, this museum offers an interesting collection of furniture, sculptures, Roman steles and an art gallery that exhibits many Baroque style pieces as well as some modern art from Galician artists. Castrelos Park has an outdoor auditorium that is usually the location for important music events. Finally, Galicia’s Sea Museum, by Aldo Rossi and César Portella, situated in the Punta do Muiño, hosts different events always related to the sea, specifically explaining its importance in the lives’ of the people of Galicia.

Vigo is a coastal city, so going to the beaches is definitely a must. We highly recommend Samil Beach, which is one of the biggest beaches in Vigo, and is complete with walking paths, sports areas, pools, an amazing view of the Cíes Islands, and many other facilities.