One of the oldest and most important of Galicia, it is a stop on the pilgrimage to Santiago de Compostela. A secluded and serene place to rest in the pilgrimage and to observe their art and nature.

This place is developed as a center of pilgrimage and has attractive chords for that purpose. It may be a good place to spend half a day or a full day, according to the temperament of the traveler. It is located in the vicinity of the Sierra de O Courel, where natural monument is Campodola folding. From Samos you can make a day trip north or south towards Lugo, Monforte de Lemos.

What to see in Monasterio de Samos

On the banks of the river Sarria or Oribio in the province of Lugo, the former monastery of San Julián and Santa Basilisa of Samos rises. Its name is derived from the word Swabian handrail, which means “place where religious live in community.” Tradition attributes its foundation in the sixth century San Martin de Braga, who became the barbarian people of the Swabians to Catholicism, although we are not aware their first reference in the history of the Monastery of Samos until 655, the year was restored by the bishop Lugo Ermefredo, restoring monastic life under the rule of san Fructuoso.

During the Arab invasion it was destroyed and abandoned and, around the year 760, King Fruela I of Asturias restored it, bringing monks from Toledo, as the abbot Argerico. After the assassination of the Asturian monarch, it served as a refuge for his widow and son, the future King Alfonso II, the Casto. At the beginning of the tenth century, the wealth of the monastery attracted the attention of Don Ero, Bishop of Lugo; he managed to expel the monks of the same, taking possession of their lands. The decline prompted to place the counts Arias and Gutierre Menendez Menendez claimed its recovery, establishing a link between this family and the monastery. In 960 the religious community decided to adopt the Benedictine rule and then incorporated into the Order of Cluny in the twelfth century. During the Middle Ages, the protection of the surrounding kings and nobility and good administration, made to become one of the richest monasteries in Galicia, as had dominion over two hundred villas and five hundred places.

In 1558, a fire forced its reconstruction. As a result thereof, only preserved medieval buildings door of the old church, the chapel of Salvador, a column and a fragment of a marble plaque in the ninth century. As a result of the seizure of church lands, the monks had to leave the monastery in 1836. But the Benedictines returned in 1880, during the reign of Alfonso XII. In 1956 he suffered another fire again being rebuilt again. Currently it has a large hostelry serving pilgrims on their way to Santiago.

The Monastery of San Julian, in the municipality of Samos, is a set of daunting sign of a spiritual experience that has suffered all kinds of ups and downs over fourteen centuries, being reconstructed at different times, so it has Romanesque structures , Gothic, Renaissance and baroque. Linked to the Camino de Santiago, it is noted for its wealth and its special attention to the pilgrim. For a time, in addition to hospital was a place of burial of those who died on the way passing through the province of Lugo, and in the eighteenth century, for three days a year, they were fed in the refectory the same ration that monks, which was a luxury for the time.

The abbey church, built between 1734 and 1748, is the work of monk Juan Vazquez. Baroque style though austere forms, is striking for its luminosity and grandeur. It articulates with a Latin cross with three naves separated by pillars and covered with barrel vaults with caissons, which rest on strong pillars with Doric pilasters on their faces ships. On the cruise a hemispherical dome on scallops, decorated with reliefs of caissons and the Benedictines doctors Marian San Ruperto, San Bernardo, San Anselmo and San Ildefonso rises. The façade, preceded by an elegant staircase of the eighteenth century in a loop reminiscent of the Plaza del Obradoiro in the cathedral of Santiago de Compostela, was not completed, the absence of the projected lateral towers. Inside the temple is the main altarpiece, Jose Ferreiro (1738-1830), excellent neoclassical work dominated by the image of the patron, St. Julian, with a break of glory to Bernini contained the sky, towards which directs the holy your static look. The temple has up to twelve altarpieces more beautiful, three of whom are believed occupied the tripartite apse of the Romanesque church, and other baroque many dedicated to the Immaculate Conception, St. John the Baptist and the Virgin Dolorosa, made by Francisco de Moure (1577 -1636). 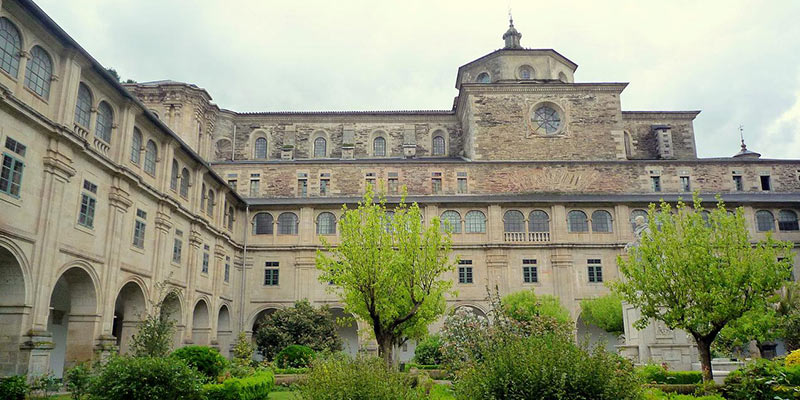 The abbey also has two impressive cloisters of unequal size, linked together: the Great or Feijoo cloister and the Gothic cloister of the Nereids. The Cloister Grande is the largest of Spain, with bays almost sixty meters long. Built in the late seventeenth with a style that combines classicism and herrerianismo, consists of nine arches on each side on the ground floor, Doric columns on the first two floors and Ionic in the windows ajimezados arc carpanel third . also called the father Feijoo because this illustrious thinker took the Benedictine habit at the monastery in 1690, hence his statue, the work of Galician sculptor Francisco Asorey, it is located in the center of the garden. The Gothic cloister of the Nereids(s. XVI) well known for the fantastic Baroque fountain that presides, retains a Romanesque façade whose construction lasted for 20 years (1562-1582). Between the two cloisters is the clock tower.

Not far from the monastery you can visit the Moorish Salvador chapel (late s. IX-early tenth), also called the cypress tree growing beside him. Of a single ship and flat head end cap, is striking for its hardiness, based on slabs of slate; by the south gate, with a bow almost horseshoe framed painting of a rectangular frame and the ajimez the headwall of the head, which lacks Mullion column.