The Cathedral and the Marshall of Mondoñedo

In the comarca of A Mariña Central, to the north of the province of Lugo, you’ll find the old town of Mondoñedo adorned with a cathedral and a romantic history/legend.

Plan your stay in Mondoñedo

Visiting Mondoñedo can take half a day or an entire day if you see the castros and archaeological remains in the surrounding area. If you want to spend the afternoon elsewhere, the nearby Vilalba is one possibility. Another option is to head north to Foz and visit the castle of A Frouxeira in memory of the Marshal of Mondoñedo. For day-long excursions to Mondoñedo, you have to see the famous As Catedrais Beach (be sure to check the time of low tide in advance) and the beautiful Ribadeo, which is a good place to eat with magnificent views of the estuary.

What to see in Foz and San Martiño de Mondoñedo

The history of Mondoñedo began in 1112, when Queen Urraca I of León decreed that the bishopric of San Martiño de Mondoñedo be relocated from the town of Foz to Mondoñedo. Thus, what was then known as Vila Maior do Val de Brea—also called Vallibria—came to be called Mondoñedo. In 1156, it received the title of “city” from King Alfonso VI, although in 1182 it would lose the bishopric, which was moved to Ribadeo to encourage the settlement of this port city. The diocese was recovered in 1230.

On December 13, 1483, Marshal Pedro Pardo de Celaza was beheaded on As Catedrais Beach in Mondoñedo. Pardo de Celaza was a feudal lord, a relative of the Count of Lemos, and a supporter of Juana la Beltraneja who was betrayed and captured after confronting the Catholic Monarchs. According to tradition, his wife was rushing to deliver the news that the king had pardoned the marshal when his enemies detained her on the bridge at the exact moment that he was executed. The marshal became a legendary figure, and his remains were discovered in 1965 inside the cathedral. More recently, Mondoñedo is a place that preserves the memory of many famous Galicians, including Leiras Pulpeiro, Pascual Veiga, Noriega Varela, and Álvaro Cunqueiro; the latter was a great writer to whom the town pays special tribute.

The old quarter of the city, declared a Conjunto Histórico-Artístico in 1985, centers around the plaza of the cathedral, which was built in the 13th century and is the point where all the streets in the city converge. Bishop Martiño ordered the construction of the cathedral between 1230 and 1248. It consists of three naves and a transept, following the architectural guidelines of the Meira Monastery, and several styles come together on its façade, which maintains the original Romanesque façade, a Gothic rose window, and Baroque towers and capitals. Of particular interest are the Gothic murals located under the two 8th-century organs, representing the Massacre of the Innocents and scenes from Saint Peter’s life. The cathedral houses the Cathedral and Diocese Museum of Mondoñedo, which has a diverse collection: polychrome wood sculptures, paintings (especially old French ones), Gothic religious imagery, Episcopal ornaments, and ceramics from Sargadelos. A few areas of the museum in particular that call the attention are the bedchamber of Bishop Luján and the two Gothic parlors on the top floor, particularly the one located above the right nave of the cathedral, which is over 30 meters long and decorated with Gothic flying buttresses and gold polychrome on stone. Connected to the cathedral you’ll find the Episcopal Palace, an 18th-century building with a Neo-Gothic chapel. In front of the palace are the colonnades of the Plaza de España, where there is a statue of a seated Don Álvaro Cunqueiro observing the cathedral.

Another must-see in Mondoñedo is the Saint Catalina Seminary, the site of the first seminary in Galicia (established in the 16th century) and the third to be built in all of Spain, although the current building was erected by Bishop Losada Quiroga in the 18th century. Built in the neoclassical style, it is the largest building in the whole city. Its façade, made of the dark slate characteristic of the region, is dominated by the image of Saint Catalina, the patron saint of young people and philosophers. The seminary contains a library of over 25,000 volumes which include hundreds of incunabula and a manuscript from the late 13th century. Currently, it continues to function as a minor seminary. 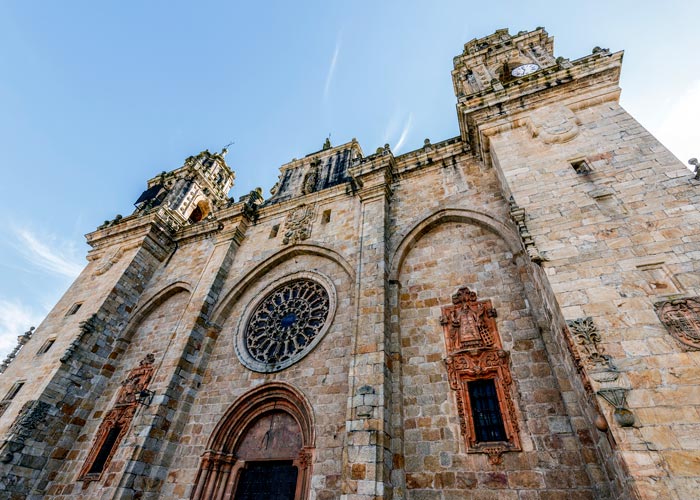 Other monuments in the city include the Sanctuary of Los Remedios, located at the entrance to the city, which was founded in 1158 and refurbished in 1643 and 1733. With a floor in the shape of a Latin cross and naves covered by barrel vaults, it is distinguished by its impressive Baroque altarpiece. The 18th-century Convent of Saint Peter of Alcántara houses the Álvaro Cunqueiro Cultural Center, named in honor of the well-known 20th-century Galician author. The Neo-Gothic Church of Santiago was consecrated in the early 20th century, for which reason it is alternately known as the New Church. It has a floor in the shape of a Latin cross and an atrium with gardens that surround the whole church. Inside there are several Gothic-influenced altarpieces, especially that of the main altar, which features a large image of Christ.

When we speak of Mondoñedo, it is impossible not to mention the Ponte do Pasatempo, the bridge where the enemies of Marshal Pardo de Cela detained the bearers of the royal pardon so that his execution would be carried out. The bridge crosses the Valiñadares River, in which there used to be several mills. It has a unique seven-meter arch and thick stone walls, and an ancient Roman road passes over it.

Its urban architectural landscape is characterized by the slab roofs of the houses, which culminate in stone points (battlements) for protection against the wind. The city of Mondoñedo is one of the points through which the Camino de Santiago passes, making it a resting place for pilgrims.

The valley in which the city is located contains numerous archaeological remains as evidence of human settlements dating from the Neolithic age: castros such as that of Zoñán, dolmens, and petroglyphs, symbolic designs created on rock.