Where the monks returned

On an ancient Roman camp, generations of monks built, rebuilt and returned again and again to this monastery, over a thousand years. The visit to the monastery, stately homes and surroundings of Sobrado dos Monxes can be done in one day. To spend another day in the area, we recommend heading east to spend the day in the beautiful city of Lugo. Another option is to go west to Santiago de Compostela. A third optionis to cross the roads north to the natural park of Fraguas do Eume.

The visit to the monastery, stately homes and surroundings of Sobrado dos Monxes can be done in one day. To spend another day in the area, we recommend heading east to spend the day in the beautiful city of Lugo. Another option is to go west to Santiago de Compostela. A third optionis to cross the roads north to the natural park of Fraguas do Eume.

What to see in Sobrado dos Monxes

Its name has two possible origins. Some argue that it derives from the Latin word, which means “the top of the house,” made from “cork oak”, common tree in that area (in Galician, sobreira). In the area there are traces of the passage of the Romans, as evidenced by the Roman Camp Citadel, who settled on a high plateau of 480 meters. This camp occupies more than two hectares and is surrounded by a wall, a moat and several checkpoints. It was stationed in a Roman cohort dedicated to controling the road that connected “Lucus Augusti” (Lugo) with the port of La Coruna. The history of the place begins properly with Hermenegildo Aitez (898-966) gentleman who was named Earl of Présaras by King Ramiro II of León in the year 920. The new county was established in this strategic area, the king ordered him to repopulate pressura system, whereby the first farmer who roturaba land was recognized as owner. After years of service in the Court, Hermenegildo and his wife – Paterna Gundesindiz – founded in the year 952 the Monastery of Santa Maria of the Monks. Upon the death of his wife, Hermenegildo joined as a monk, bequeathing all county property to the monastery. Paterna Hermenegildo had several children, including the famous Bishop Sisnando II Menendez, who fought against the Vikings in defense of Compostela.

Little more is known of the monastery of Santa Maria until it joined the Congregation of Castile in 1498, date from which most of the current buildings were built, completed in 1708. In 1835 it was sold off and became property of some individuals, becoming a ruin. In 1954 it returned to property of the Catholic Church, which commissioned its recovery to a community of Trappist monks established there since 1966.

Sobrado has a rich natural heritage, consisting of numerous rivers and lakes (one of them declared wet space of European interest) and Atlantic forests characteristic (fragas) populated with oaks, chestnut trees and birches.

In the monumental area, its main attraction is the Monastery of Santa Maria del Sobrado, declared a Historic-Artistic Monument and one of the main monasteries of medieval origin in the province of A Coruña, which appears already mentioned in documents of the late tenth century the name of San Salvador. The history of the first hundred and fifty years of life of the monastery is not sufficiently studied. It is known that in the early twelfth century it was abandoned.

In 1142, Bernard de Fontaines (San Bernardo), sent from his abbey at Clairvaux (France), made it a Cistercian monastery of considerable importance. During the rest of the twelfth century and the thirteenth century, the monastery developed a great spiritual and economic activity. Then, like most European monasteries, it underwent a period of decline that halted in 1498, when it joined the Congregation of Castile, also Cistercian. After the confiscation of Mendizabal was abandoned later Cardinal Payá acquiring it. Today, it is inhabited by Benedictine monks.

The monastery remains in good condition, with the church and much of the monastic dependencies, three cloisters (the Hospedería or the Pilgrims, the Processional and the Cloister Grande), the chapter house, refectory, kitchen, sacristy and library. The visit begins by neoclassical convent cover, which gives way to the Cloister of the Pilgrims, next to the church early sixteenth century and herrerianas austere lines. From here we continue the Processional Cloister, faces or medallions (named for the medallions decorating the top floor, showing faces of different characters) that access the chapter (second half of the twelfth century) and the kitchen equipped with a large fireplace (XIII century). This was the original cloister of the Cistercian construction of the thirteenth century, but was completely rebuilt between the sixteenth and seventeenth centuries. 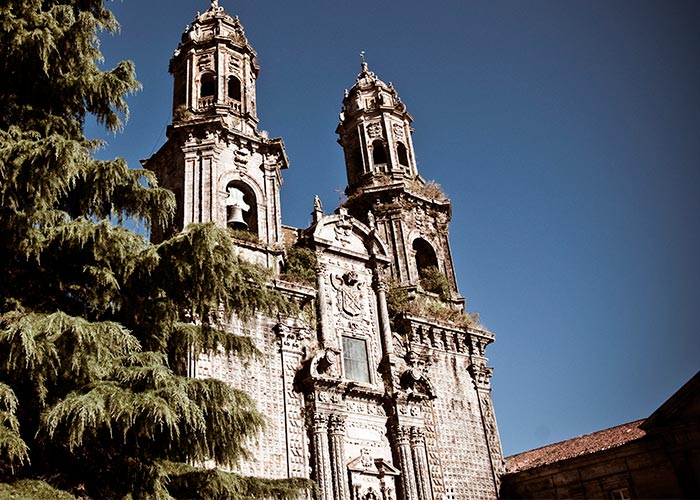 Inside the monastery of Sobrado dos Monxes

The temple, the seventeenth century, is a monumental example of the first Galician Baroque, with a Latin cross and three naves at different heights and a large dome carved with geometric and plant motifs on the cruise. The grand facade of the church is the work of Pedro Monteagudo, with a strong upward direction and an overloaded decor reminiscent of the Spanish American Baroque. Inside, in the transept, the chapel of the Magdalena (s. XIII) and the Chapel of the Rosary (s. XVII) are opened.