Since before the arrival of the Romans, although they were the ones who popularized the belief, it was believed that this place was the end of the world. Today it is known that it is not the westernmost point of the continent, that title goes to Cabo da Roca, in Portugal, but it does not matter, really, because this belief remains today. Especially because it feels like the end of the world. Finis Terrae, these Romans said, from which today’s Finisterre derives. Fisterra, the Galicians say today. Welcome to the end of the earth.

A bit of history of the cape of Fisterra 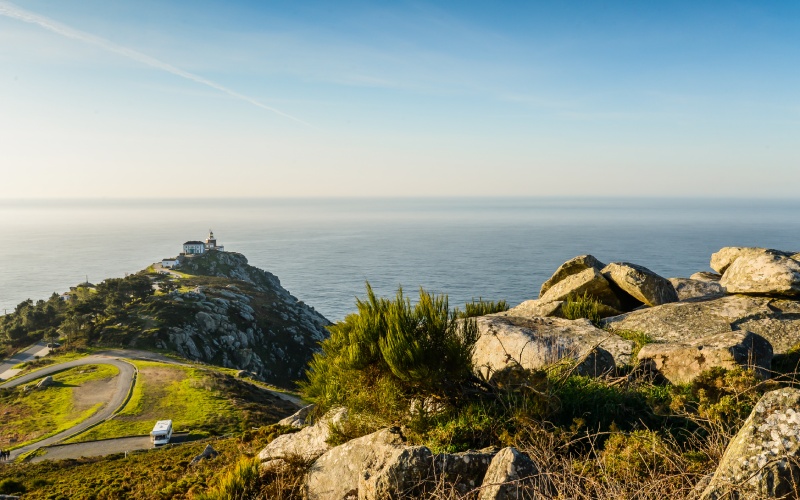 Fisterra lighthouse in the Monte do Facho. | Shutterstock

The fascination that awakens today the cape of Fisterra goes back to antiquity. The first inhabitants of this land already considered it a special place, sacred in the purest sense of the term. It is considered that in the known as Monte do Facho, 242 meters above sea level, was the famous Ara Solis, where the pagan rites of worship to the star were performed.

The Romans continued and expanded this belief, until little by little one of the first pilgrimage routes of the continent was created, which had nothing to do with religion. For thousands of years, it was believed that beyond this point there was nothing more than a place where the sun went out every night among sea monsters and there were many who wanted to test its strength in situ. 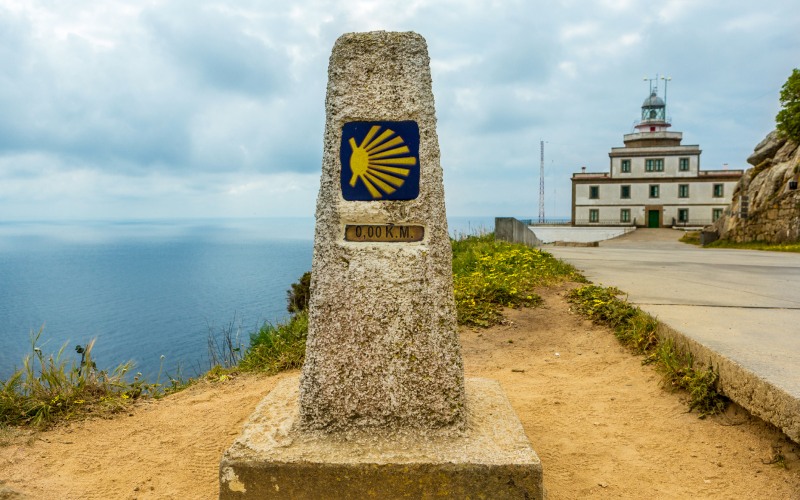 At the cape of Fisterra is the 0.00 kilometer of the Way to Santiago. | Shutterstock

Initially, this fame had nothing to do with the Way to Santiago, which was not born until the ninth century, but it is undoubtedly the influence of this in the current popularity of the cape. As the Way transcended borders and the paths of Galicia filled with pilgrims, the attraction to Fisterra grew even more. As the true nature of the land became known and the Atlantic began to be explored, the importance of Fisterra did not diminish, it only evolved.

Because of its location, on the Costa da Morte, the cape of Fisterra is also fundamental in the history of navigation. In 1853 a lighthouse was built, whose light currently reaches a distance of 65 kilometers. On the Galician coast, so wild and dangerous, this light has been a guide for almost two hundred years. Until recently, when it was banned due to the fires it caused, pilgrims on their way to Santiago de Compostela brought other lights. They were those generated by the fires in which they burned their garments as a symbol of rebirth after completing the sacred journey. In any case, a thing of the past. Today it is a lost tradition, for the good of Fisterra.

The keys of the cape 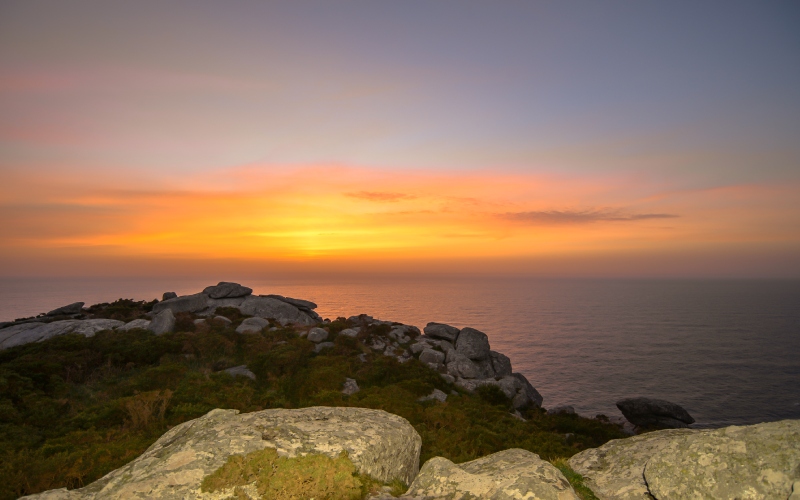 Sunset from Monte do Facho. | Shutterstock

The lighthouse of Fisterra is often spoken of as the place the traveler must get to. Obviously, it is the last thing before you hit the Atlantic, but it is not the only thing you can visit on the cape. In any case, it should be observed carefully. This octagonal tower located 138 meters above sea level goes with the lighthouse keeper’s house and several businesses that can complement the visit.

One cannot leave this place without visiting the Monte do Facho. Legends say that here was located Dugium, the great city of the ancient Celtic settlers. Today you can see the remains of an ancient settlement. Also the lighthouse from a distance, with the Atlantic behind it. The views are impressive.

The bravest may be encouraged to descend the rocks of the cliff to reach, as far as possible, the Atlantic waters. It should be done carefully, knowing the limitations of such an adventure and without forgetting that this place is part of the Costa da Morte. Nature is as wild as the sea itself, so be careful.

Places near the cape of Fisterra 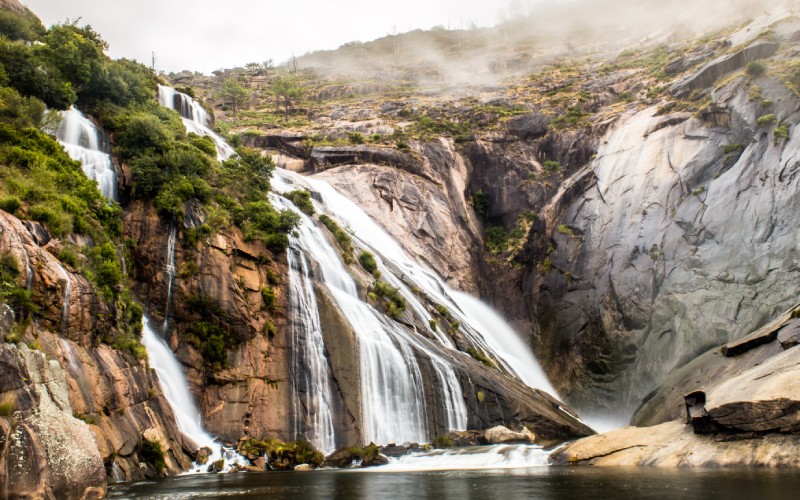 The cape of Fisterra is reached by a road that connects with the town of the same name. You can make the journey by car or you can choose to walk along the coast. Fisterra, just over half an hour walk, is a fishing village full of alleys and old houses. It has several beaches scattered along the coast, highlighting the praia da Langosteira, and a small port around which it began to grow. It is ideal to settle down during the weekend.

In this getaway, you can discover other interesting fishing villages, such as Sardiñeiro de Abaixo or Corcubión, or the trails that make up the epilogue of the Way to Santiago. They are paths that circulate through forests among which, from time to time and suddenly, the sea can be seen. You can also visit places like the Ézaro waterfall, an impressive waterfall towards the sea, where the Xallas river ends. It is a unique phenomenon in Europe.

Nor should we forget that Fisterra is the gateway to the Rias Baixas, which between towns and coves, cliffs and traditional culture, make up one of the most extraordinary regions of Galicia.

The sacred end of the world where the sun dies 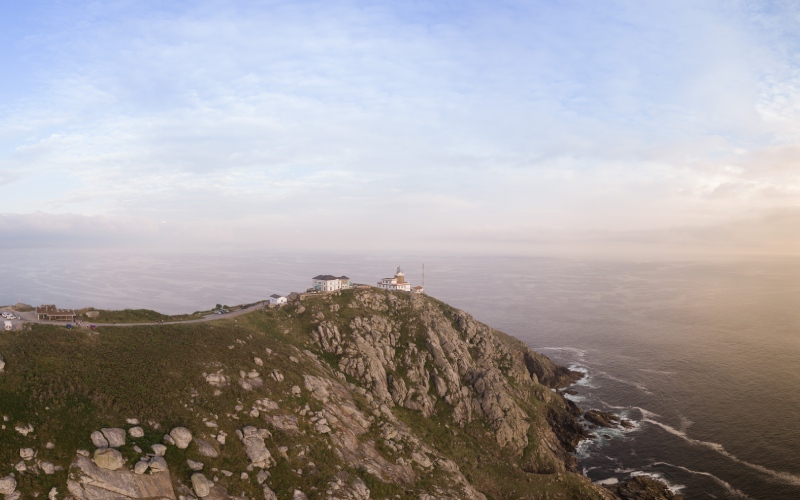 The cape of Fisterra seems to be the last thing before meeting the Atlantic, that’s why it is the most famous sunset in Spain. | Shutterstock

Cape Fisterra is one of those places that, if you have the chance, you should visit at least once in your life. Because all the history it holds is felt the moment you set foot there. The Celts, the Romans, the sailors of Galicia and all the pilgrims who have crowned their Way here are present in the atmosphere that permeates the most famous sunset in Spain. Perhaps of the entire continent.

Fisterra is, like the Atlantic Ocean, eternal and also definitive. Where many people continue to conclude their journey and where many others, simply, want to magnify it. It is our weekend getaway for its history, for the feelings it gives to the traveler, and also because it is the best place to see how the sun goes out to meet, as every night, with the sea monsters. A peaceful sunset to enjoy during your stay.

A Coruña, Folclore, Galicia, history, lighthouses, Way to Santiago, weekend getaway
It may interest you...