The official capital of Baix Empordà was the domain of the Knights of the Holy Sepulchre. For centuries, these avoided the incursions of pirates that other regions suffered. Their traditions have been immortalized by the delicious texts of the writer Josep Pla. Are you going to discover with us what to see in Palafrugell? Keep reading!

Plan your stay in Palafrugell

In this coastal town there are many things that will amaze the visitor. Therefore, it is necessary, at least, a full day to be able to fully enjoy everything it has to offer. If you want to continue travelling after visiting the municipality, there are many other towns on the Costa Brava, some of them as interesting as Pals, Begur or Calonge.

It is also advisable to visit the Medas Islands, to the north, a perfect place for diving. And to enjoy the local gastronomy of Palafrugell to the fullest, on our page Eating in Palafrugell we offer all the information about where to eat.

Palafrugell from the Neolithic

What you see in Palafrugell is linked to its history. This site was already occupied in the distant Neolithic period, as shown by the dolmen at Can Mina. The Iberians chose a promontory to found a settlement in the 6th century BC in the area known as San Sebastián.

In the Roman period, from the 2nd century BC, Llafranc would replace San Sebastian as the preferred settlement. Thus, it prospers until the 4th century with its ceramic and wine production. From this period there are still remains of villas, a wine press and a winery, which take us into the history of Palafrugell.

From the arrival of the Visigoths in the 5th century, Palafrugell would gain importance. A word of Germanic origin composed with the root palau (strong house) that indicates it as a fortified place. The term appears for the first time in 988. In 1194 King Alfonso I of Aragon ceded the estate to the military order of the Knights of the Holy Sepulchre. His priory of Santa Ana, located in Barcelona, appointed the administrators of these lands until the beginning of the 19th century.

Like the rest of the Catalan coast, it suffered pirate attacks from the 15th century onwards. Palafrugell and Vila Seca would be walled and up to fifteen coastal watchtowers would be built over the years to communicate the presence of invaders. Among them was the Tower of San Sebastian (1441) in Llafranc.

In this way, serious looting and fires of other nearby towns were avoided. However, the insecurity delayed the demographic and economic development, as the threat of a landing deterred the establishment of permanent populations and ports on the coast. They had huts with fishing boats.

In 1638 the king’s army housed over three hundred soldiers in the town, of which was exempted by royal privilege in 1271. The expense and inconvenience would lead to the July 20 riot, with disproportionate repression, including burning and looting.

Decline and prosperity of Palafrugell

The Guerra dels Segadors devastated the population. Disaster aggravated by the plague epidemic of 1652, which caused 230 deaths. From 1705 onwards, the uprising against King Philip V led to nine years of war in the history of Palafrugell, with a new French invasion in support of the new dynasty. Once the conflict was over, a period of expansion began. This happened thanks to the cork business and the possibility of exporting to America. In the town there were up to thirty manufactured products in the mid-nineteenth century.

The Napoleonic invasion and the Carlist wars delayed the development of the population, but it continued being a reference for its enormous cork production. In 1900 the biggest company in Spain was founded here. After the decline of the cork tree exploitation, the municipality was a pioneer centre for holidaymakers. Amongst these was the young Barcelona writer Josep Pla, who masterfully recounted the life of the people and holidaymakers of the region.

What to see in Palafrugell

The visit to what to see in Palafrugell begins with the Iberian site of Sant Sebastià de la Guarda. It is located on a hill that plunges into the sea and allows us to see the entire coast of the municipality. In this beautiful spot, the silhouette of a watchtower stands out. There are also other buildings to see in Palafrugell. For example, the Lighthouse (1857), a small hermitage (1707) and even an inn, of considerable size and organised around a beautiful courtyard.

Scattered around the heights of the municipality closest to the coast are the towers of Santa Margarita and Can Vilà (17th century), which have a circular silhouette. Next to the Los Moros Tower is Can Borrull (16th-17th centuries), which includes a chapel dedicated to Santa Margarita.

In Palafrugell, the Church of Sant Martí (15th and 18th centuries) is interesting for its bell tower and, inside, the Capilla Fonda. Its spectacular Baroque altar was destroyed in 1936. The town centre still has fragments of its walls (15th-16th centuries), with the arch visible in Plaça Nova being particularly noteworthy.

The Josep Plá Foundation is located in the town centre. This contributes to the dissemination of the exquisite work of this writer who spread the beauty and the people of the region throughout the world. The Ernest Moratò Foundation, located around the parish church, is dedicated to the promotion of habaneras, a musical genre in which the municipality stands out for its important international competition.

Places to discover the history of Palafrugell

Several notable houses to be seen in Palafrugell have associated strong towers, such as Can Boera. In the town of Ermedàs you can see Mas Fina. Another of the most notable buildings of the industrialization in Palafrugell is the interesting Cork Museum, in Can Mario. It allows us to understand such an important industrial activity for a wine-producing country like Spain.

Catalan contemporary art has its headquarters in the Vilà Casas Foundation. The foundation has its collection of sculptures from the second half of the last century installed in Can Mario.

Towards the interior of the municipality is Llofriu, a beautiful town with traditional stone architecture. Through it, time seems not to have passed. The parish church of Sant Fruitós (medieval, reformed in the 18th century), whose main altar was also destroyed in 1936, is worth mentioning.

On the coast, just a few kilometres from what you can see in Palafrugell is Calella. It is a small, picturesque fishing village that has been developing since the end of the pirate attacks, well into the 18th century. There is the Cap Roig Botanical Garden, which covers 17 hectares and concentrates hundreds of natural species. This space is the spectacular setting where every summer a renowned music festival is held. 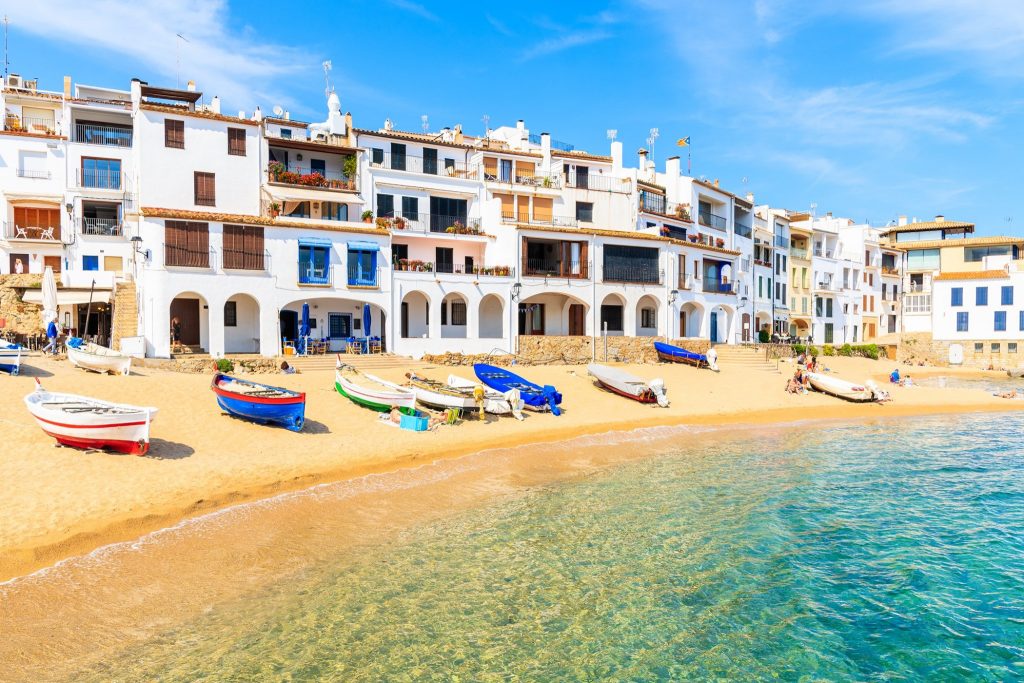 It is advisable to leave your car in the surroundings of the access routes to the old town.