Its strategic position in the plain of the River Tajo has influenced into the appearance of this city, turning Talavera de la Reina into one of the most dynamic economic focus in the region. Despite all the wars in this city of Toledo, mostly known by its ceramics, it still preserves a rich historical and artistic heritage.

What to see in Talavera de la Reina

Things to do in Talavera de la Reina normally involve visiting some of its main sights: Nuestra Señora del Prado Basilica, the Prado Gardens, the Ethnographic Museum, and the Ceramics Museum. In fact, this city is synonymous with ceramics. Although some its first pieces date back to the 12th century, it is not until the 18th century, thanks to the Bourbon Kings, when the ceramics production and commerce bursts. The Ceramics Ruiz de Luna Museum deals with the story of ceramics in this city and the production of this treasure throughout the history of this amazing locality.

Talavera de la Reina still preserves an old city worth to visit, as a proof of it, Nuestra Señora del Prado Basilica stands out in the road that links Madrid with Extremadura. This temples, originally built with a Mudejar style, is a combination of Renaissance and Baroque styles in which the niche of the Virgin of the Prado (patron saint of Talavera) looms –here you can enjoy what has been called the Ceramics Sixtine Chapel because of the outstanding tiling pieces decorating the room.

Next to the basilica you must see the Bull Ring, also known as La Caprichosa (the Capricious). Both the bull ring and the sanctuary are located in the Prado Gardens, decorated with ceramics by Ruiz de Luna. This space spreads out to the river, blending with the Alameda Park, a garden area which houses the fairground.

If you keep walking to the Ronda of the Cañillo, parallel to the river and to the promenade, you will reach to the old city, surrounded by the wall enclosure from the Muslim period. The Albarranas Towersand the Seville Gate are well-preserved out of the first and second wall enclosures respectively.

In San Pedro plaza, heart of the old city, we find the Mothers Bernardas Convent, a Baroque temple built in the 17th century. Next to it we find San Agustín plaza, one of the most emblematic spots in Talavera. Here lies the Saint Agustín the Old Church (17th century) by Fray Lorenzo of Saint Nicolás. The building, example of the Baroque brick that abounds in this locality, houses the Ceramics Ruiz de Luna Museum.

Saint Agustín street leads us to Saint Jerónimo or Saint Prudenco Convent, a cultural center whose head was designed by the architect of the El Escorial Monastery, Juan de Herrera. Behind the temple and facing the River Tajo we can go to the Ethnographic Museum, which deals with the history, customs and traditions of the region. From this point we can view the three bridges crossing the river: the Old Bridge (supposedly tracing back to the Roman period) and the Iron Bridge (a display of the industrial revolution open in 1908). 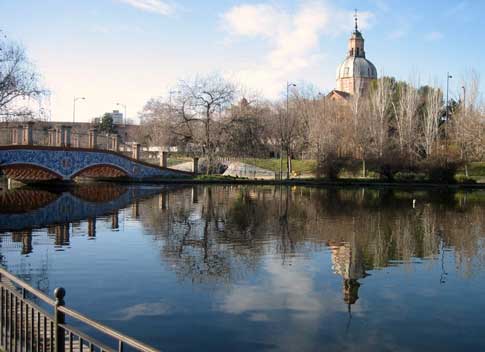 Nuestra Señora del Prado Basilica at the back

Santiago the New Church is a magnificent show of Mudejar art declared National Monument in 1931. Outside the walled enclosure we can visit Santiago the Old Church (set up in 1226), Saint Andrés Church and the Convent of the Carmelitas Descalzas (which holds inside a reliquary a signed letter by Saint Teresa of Jesús and two sculptures from the 18th century by Pascual de Mena).

The Saturday after Easter, the city celebrates its oldest festival: declared of National Tourist Interest, the Mondas has its origin in the offerings to the goddess Ceres back in the Roman period.

Spanish Castles In Film
[vc_row][vc_column][vc_column_text]There are numerous Spanish castles from movies that have been featured on the silver screen. Más información

World Heritage cities you would love to visit
[vc_row][vc_column][vc_column_text] Probably you have a list, written or in your mind, about the places you Más información

A Cervantine journey in La Mancha
[vc_row][vc_column][vc_column_text]Miguel de Cervantes died four centuries ago, but he's still well alive. Not only was he Más información