As if it were a Martian landscape, many people are unaware that there is an area near Madrid that could well be from another planet. These are the gullies of Alpedrete de la Sierra, in the municipality of Valdepeñas de la Sierra, in the province of Guadalajara. These tall, reddish-coloured forms surprise those who see them, as the shapes created here by the erosion of rain and wind are very curious.

Origin of the gullies 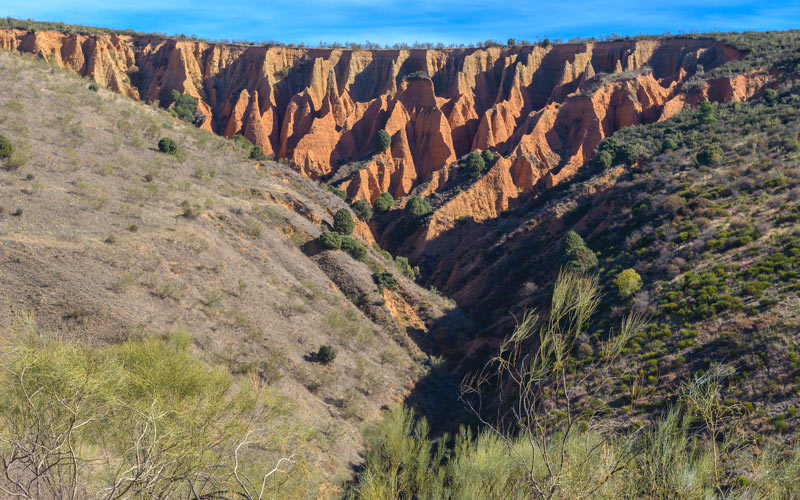 Although they may look like an alien or Wild West scenery, the gullies of Alpedrete de la Sierra are located in Guadalajara. They are spectacular reddish-coloured peaks due to the clay. Specifically, the gullies originate on clay soils, which, being soft, are vulnerable to erosion. Over time, rainwater has modelled the terrain, in which the clay has a combination of soft and hard materials, which are more difficult to erode, creating pyramid and tower shapes. These towers are known as “fairy chimneys”, curious geological formations arranged around a perimeter of 800 metres and with a drop of over 60 metres.

Route to discover the gullies 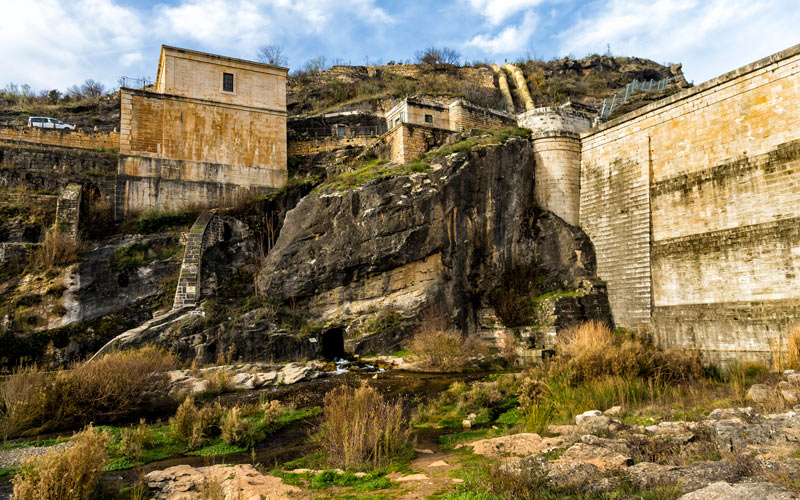 The route to discover the gullies of Alpedrete de la Sierra is simple. The route to the gullies begins on the right side of the M-134 road, when you pass the town of Patones de Abajo, in Madrid (if you have time, Patones de Arriba is one of the most beautiful towns in Madrid). It is at this point that the Pontón de la Oliva dam appears, 1,600 metres above the gullies. The dam is located in Sierra de Ayllón, still in the Community of Madrid and northwest of Guadalajara. Built in 1857, it is the oldest dam of the Canal de Isabel II. It is also the last of the six dams located on the course of the river Lozoya. 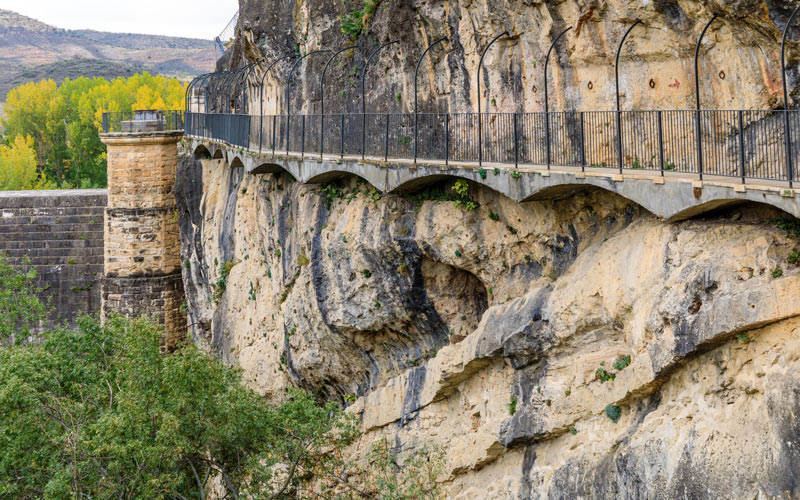 1,500 prisoners worked on the construction of this dam of imposing dimensions. However, it was never used, as it was built on a karstic system with caves and conduits through which filtrations were continually occurring. Although it is no longer in use, it is an important stop on this route through the gullies; as its large dimensions and infrastructures are well worth a stop along the way. The walkway hanging on the canyon wall and the surrounding cliffs, which are often frequented by climbers, are particularly noteworthy. 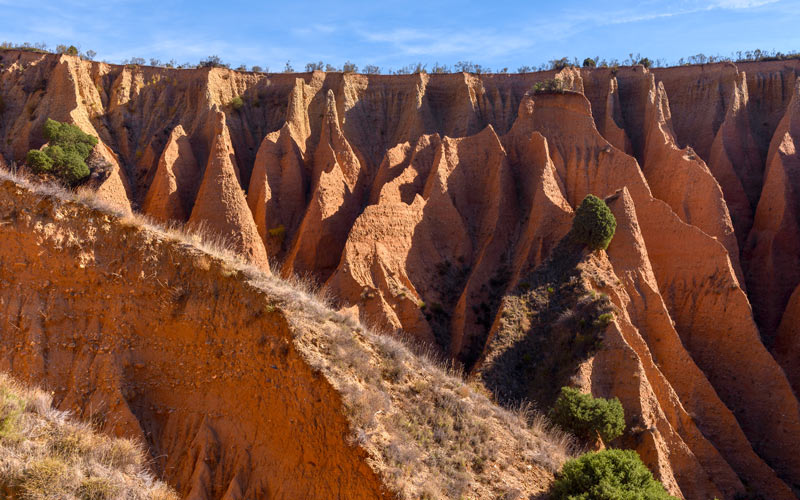 To continue the route, follow the course of the path until you reach the La Lastra stream; taking the GR10 route. Along its slope the route continues following the riverbed. The walk ends just inside the gullies. To walk among these high geological formations you have to take the central channel; as most of the rest of the branches have no exit. 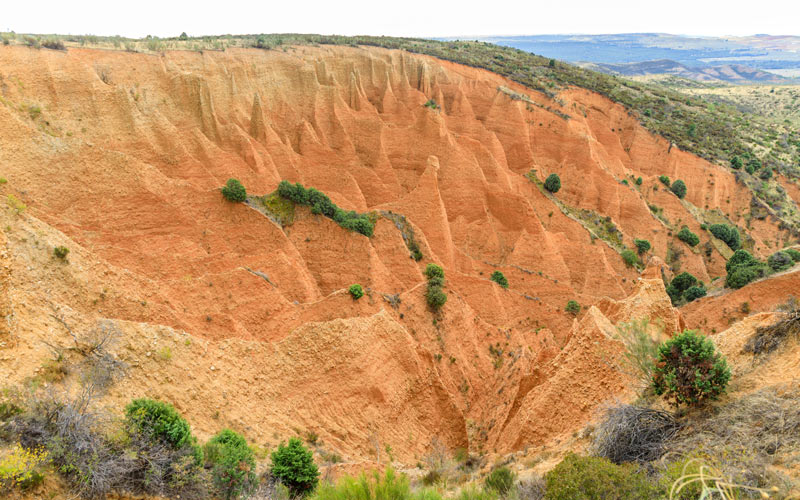 To reach a view from the top of the gullies you will have to make a greater effort; as the slope of this path on the left is a little steep. However, the panoramic views of the gullies from this height are worth the effort. 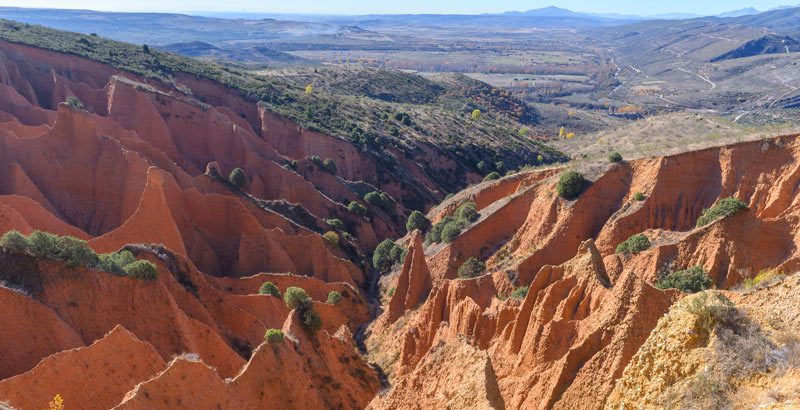 Another option is to follow the route along the top of this natural area, without descending. Leaving the gullies to the right and heading northeast, the walk ends in a small pine forest; with the summit of the Sierra de Guadarrama on the right. To return, take the pine forest in the direction of the gullies. During this route through the gullies you can see the vertical walls of the terrain and the tops of the “fairy chimneys”. As a precaution, care should be taken on the edges of the slope, as the material is flimsy.

The route can be extended by combining the visit with places around the Lozoya valley. In this way, it will be necessary to continue from the gullies to cross a field of rockroses to end up in the village of Alpedrete de la Sierra. This small village of just over 30 inhabitants belongs to the municipality of Valdepeñas de la Sierra. 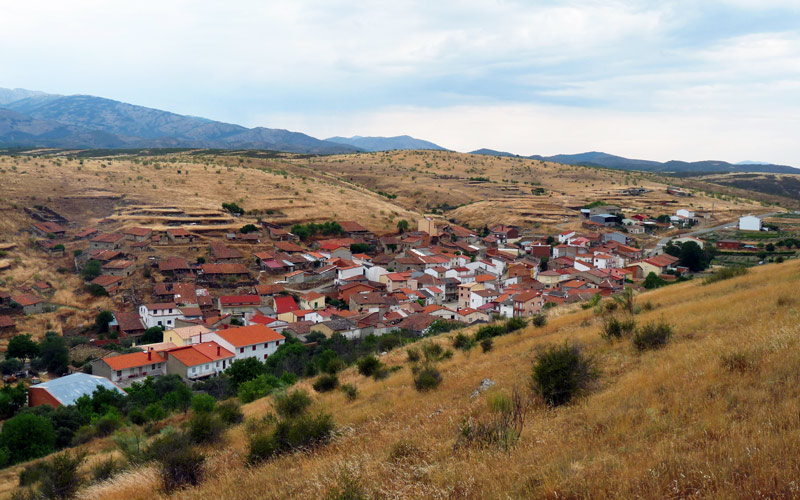 From a distance, it looks as if the village is divided in two: to the north the old part of the village with the houses and old corrals, to the other side more modern constructions. A short walk through the village is perfect to see the traditional houses made of slate, limestone and adobe. Nearby is also the picturesque Reduvia bridge, which crosses the river of the same name.

If you want to do a circular route, from Alpedrete de la Sierra you have the option of following the Lozoya river canyon through a beautiful landscape that ends at the starting point, the Pontón de la Oliva dam. In total, 13 kilometres.

The Caves of Ortigosa: walking among stalactites, stalagmites and giant columns
The caves of Ortigosa de Cameros are the only caves adapted for tourist visits in Más información