The Knights of the Order of Calatrava had a complicated change from the 12th to the 13th century. Still young, they went from being a military power in the fight against the Almohads to almost disappearing after the Battle of Alarcos, near Ciudad Real. A shock that they overcame on the basis of two powerful fortresses. First that of Salvatierra and then that of Calatrava la Nueva allowed the warrior monks to resurface and expand their orders. Two medieval sibling castles, raised on both sides of a valley and passage area. A pair looking at each other from the front and whose fates were tied by the knights who inhabited them. 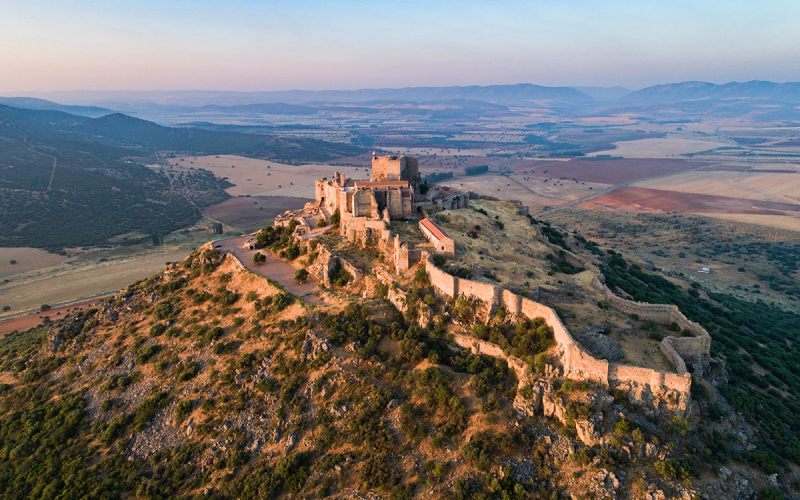 Centuries of fighting between Muslims and Christians left dramatic traces. One of the worst remembered by the latter was the Battle of Alarcos. It was in the summer of 1195 that the Almohads managed to decisively defeat Alfonso VIII, King of Castile. The arrogant attitude of the Almohads, together with the attitude of bishops like the one in Toledo, led them to avoid Leonese aid and lose control of a key area. As a result, Extremadura was sacked and the Moors almost reached the area around Toledo. León managed to contain them on its front, even allying itself with its religious enemy, due to the Castilian discouragement that meant ignoring them in Alarcos.

Among the squares that were lost was the castle of Calatrava la Vieja, the seat of the order. An almost fatal hit. Such a depression was only saved by a desperate act that took the Almohads by surprise. It was still Caliph al-Mansur, the victorious of Alarcos, when Master Martin Perez de Siones launched a lightning conquest from the Order’s possessions in Zorita de los Canes, Guadalajara. A party of some 400 knights accompanied by a pawn of 700 men took over the castle of Salvatierra. It thus served the Christians as Gormaz did Almanzor, being a notable spearhead. 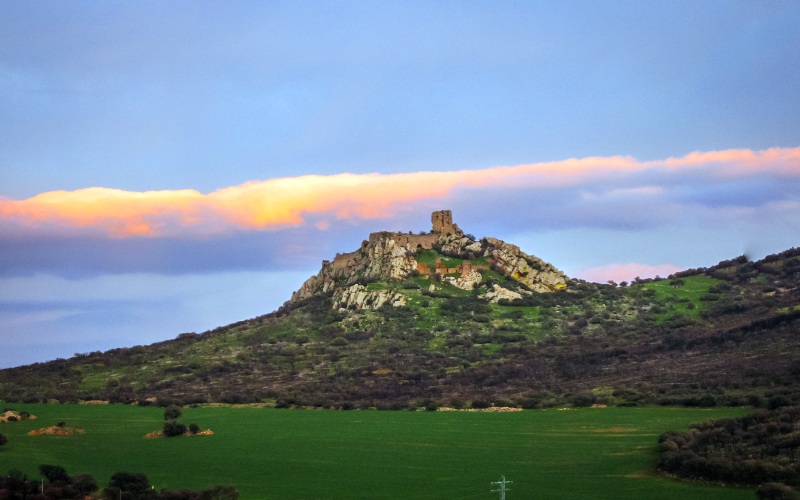 There is hardly any information about the origin of this fortress. It is estimated that it could have been built between the 9th and 11th centuries by the Muslims. There are also theories about a possible previous Roman settlement. In any case, it defends a key natural pass in the area, so its strategic value was enormous. Likewise, its masonry and inaccessible location made it almost impregnable. In fact, the chronicles suggest that it was only taken by the Christians thanks to a betrayal.

Be that as it may, the Calatrava obtained the only victory that would mark the way to the battle of Navas de Tolosa. Until 1211 they would resist without any support and surrounded on all four sides by enemies. A mixture of feats and distraction that proved to be the moral relief that Christianity required. This led to the order being known as Salvatierra during this period. They adapted the fortress to their conventual needs and provided it with a church, which infuriated the Almohads. 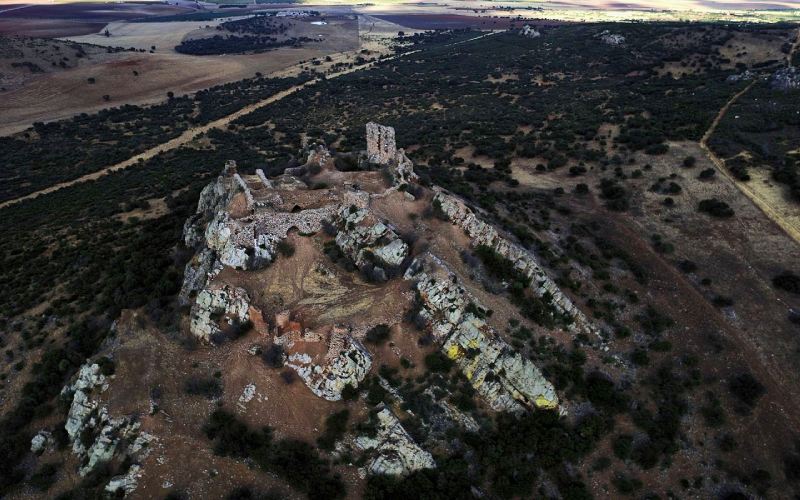 Aerial view of the castle of Salvatierra. | Wikimedia

The turning point and the construction of Calatrava la Nueva

Not surprisingly, the new caliph ended up intervening. An-Nasir formed a large army and laid siege to Salvatierra in 1211. 300 knights defended him. Almost legendary stories emerged from the siege, such as the Calatrava’s heroic charges that harassed the Almohads. They resisted for weeks until the situation became untenable. The Muslims were not in a hurry and were intelligent, so they just waited for a surrender. The surrender came after the Castilians realised that they could not assist the Calatravans. So they fled.

It would not be long before they took revenge. A great Christian coalition led by a calmer Alfonso VIII managed to mount a crusade to defeat An-Násir. With León and Portugal watching from a distance, without attacking the Castilians because of the Pope’s threat of excommunication, they managed to draw Navarre, Aragón and international forces to their cause. In this way, at Navas de Tolosa, they inflicted a tremendous defeat on the Almohads, condemning their peninsular domination. This led to the recovery of Extremadura and later Salvatierra. 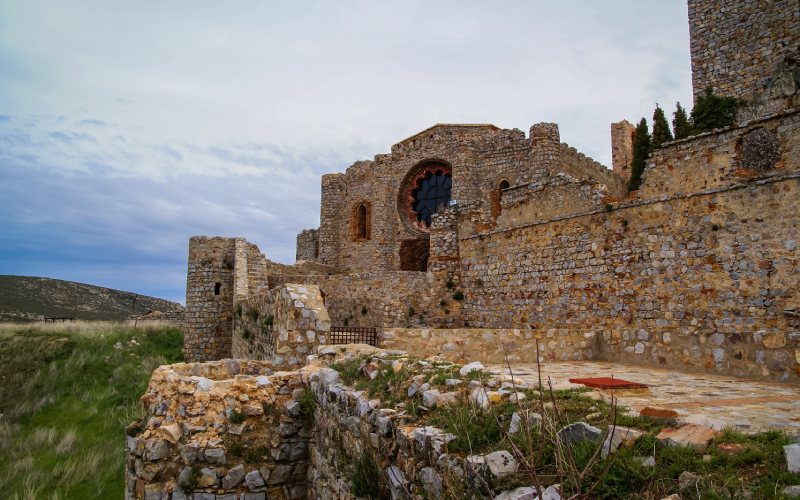 The already recovered Calatravians felt the need to have a seat at the height of their new status in the meantime that it took to retake their previous temporary seat. So they turned to the Moorish prisoners to build Calatrava la Nueva. Built as a convent and fortress, in its place was the castle of Dueñas, over which the knights obtained dominion half by donation half by purchase before Alarcos. The second decade of the 13th century saw this mass rise. Alacranejo hill was ideal for defence and was already used before the Middle Ages, from the Bronze Age, by civilisations including Romans or Visigoths.

The complex developed dramatically and was almost a city in itself. It had a service village, protected by a complete, well-preserved wall. Beyond this there were more fortifications intended to defend peasants or cattle, as well as to house passing armies. It was laid out on several levels, increasingly strong, and had a well-protected convent and a Cistercian church with three naves. Finally, at the top and in the centre, the central fortress is a powerful citadel with four levels. There were rooms such as the archives, which were supposed to be the most protected. An intricate defensive system, which is impregnable, especially when reinforced by its nearby sibling fortress. 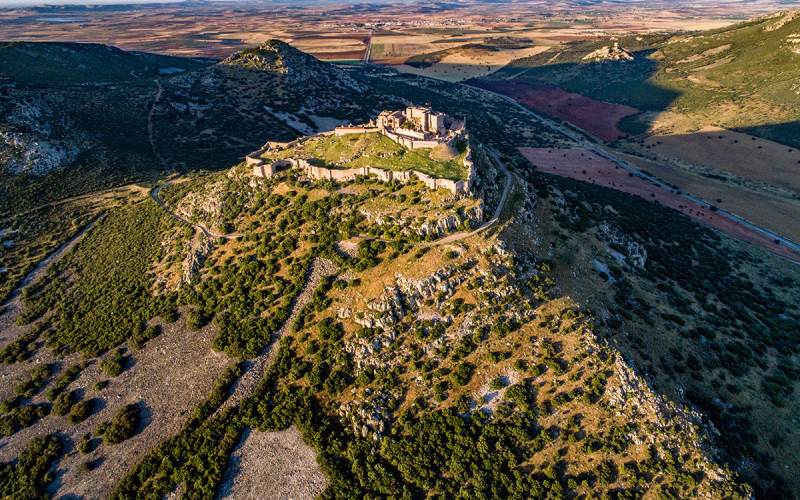 The journey to the present of Calatrava la Nueva and Salvatierra

The unbeatable protection of the central pass provided by both castles led to the appearance of Calzada de Calatrava. This town was founded as a Calatrava barn and has survived to this day. Likewise, the dynastic union between Castile and León, shortly after Navas de Tolosa, and the relief that the capture of Seville brought, left the area relatively peaceful. Until the 14th century, Salvatierra continued to function as a fortress, but the lack of activity took its toll. Meanwhile, in front of it, the mission of Calatrava la Nueva became more administrative than defensive. This did not prevent a development that ran parallel to that of the Military Order. 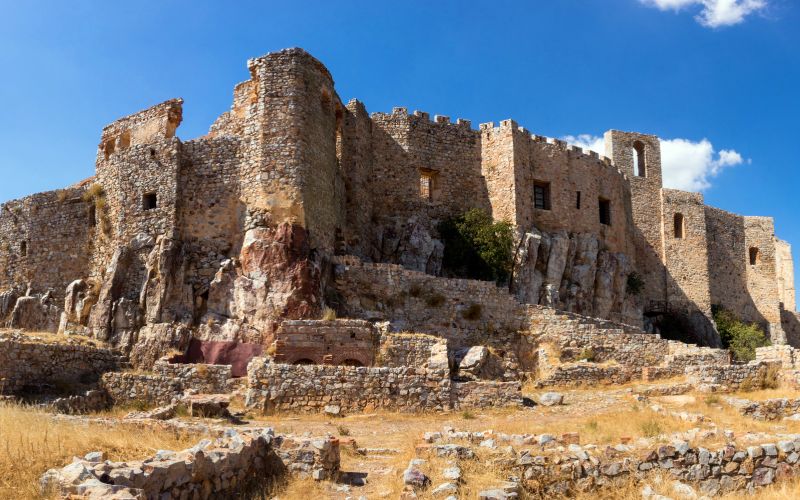 Increasingly a political institution, the trend was confirmed with the post of Master becoming a royal legacy since the reign of Ferdinand II of Aragón. Survival as a seat extended until the disentailments of the 19th century led to the site being abandoned. The great size and complexity of the enclosure went against it and ruin came. In spite of this, especially the central part, it managed to be moderately well preserved. In Salvatierra there are hardly any remains of walls and the keep. A pity, when compared with enclaves such as Bellver Castle, Vélez-Blanco, Ponferrada, Monzón or Burgalimar. 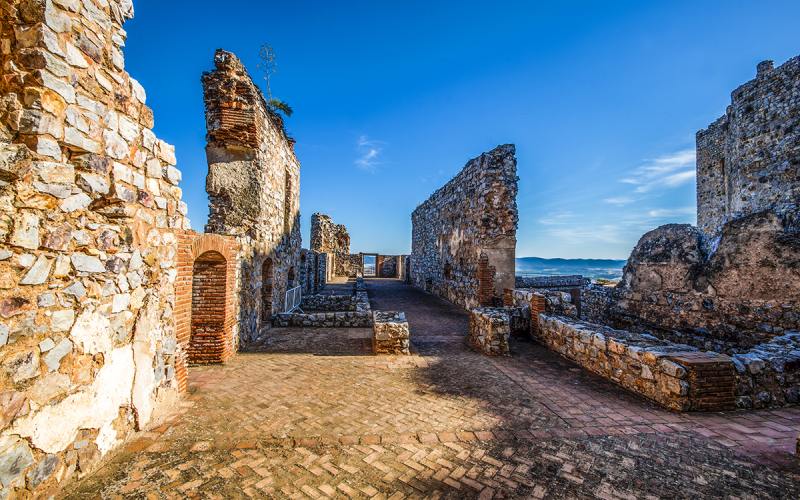 It is possible to visit both spaces, although it is worthwhile to focus on Calatrava la Nueva, which is much more complete. The outdoor and village areas are well worth a stroll. In the case of the walled enclosure of the second area, the guard patrol has been preserved. There are still some rooms in the convent, especially storage rooms. For its part, the Cistercian church is very complete and has a martial aspect. The order’s cemetery is nearby. Further on there is the central fortress, with its nooks and crannies and doors, which make it clear what a hell it would have been to take it on the assault. A visit that allows us to know the bloody history of the two castles that allowed the Calatrava to survive.