Seat of the first Courts of Europe

Crossroads, Castile gate, San Esteban was conquered by the Cid after two centuries of fights against the Muslims. His loyalty to the child king Alfonso VIII was worth to him to host the first meeting of Cortes of Castile (and of Europe, although Leon contests it).

The visit to all the places that we mention in our section What to see in San Esteban de Gormaz can occupy us half a day. The continuation of the getaway may consist of a route to the east by the important town of Burgo de Osma, the small fortress of Calatañazor and its immediate natural spaces of the Sabinar and La Fuentona. In the direction of Madrid it is possible to make a small route of walled towns: the Segovia Ayllón and the Madrilenian Buitrago de Lozoya.

The first Celtiberian settlers populated a castro at the crossroads of Clunia to Tiermes and from Uxama to Segontia Lanka (Langa de Duero), the main Roman municipalities of the area. Some tombstones, military reliefs and Roman stelae of the first century are conserved.

The first period of Arab occupation in the eighth century lasted only a few decades since it was occupied by King Alfonso I of Oviedo in the same campaign in which Burgo de Osma and Sepúlveda occupy. In 883 the Christians called Castro Moro to the castle that King Alfonso III conquered, reinforcing its walls and repobla Gonzalo Fernandez in 912. Thus becomes the key of Castile, on the right bank of the river Duero, San Esteban. In 917 it is besieged by an army, under the orders of Abi-Abda, but the Leonese king Ordoño II appeared with his troops to help the town, defeats him and places his head on its walls as a warning. In 919 this king also defeats Almodhafer, until the following year the caliph Abd-al-Rahman III seizes of her along with Osma, Alcubilla and Clunia. Fernán González will occupy it some time later, granting to San Esteban, Osma, Gormáz and their respective lands, the so-called Fuerza de las Tres Casas de la Olmeda, because it was in this last town where they met. In 978 occurred the facts of the legend of the Vado de Cascajar, in which while a gentleman heard Mass his spirit overthrew the Moorish caudillo in a battle.

In 1054 it returns to Christian hands of definitive form and begins the stable repopulation of the town. This was the village that welcomed the daughters of the Cid after the Afrenta of the Robledal of Corpes. Through this town will happen, in 1102, the funeral procession of the Cid.

In 1163 the village received the son (aged seven) Alfonso VIII when the Lara family, who had to protect him, decided to give it to his uncle, King Ferdinand II of Leon, who had already invaded part of Castile; For Pedro Núñez, lord of San Esteban, brought him from Atienza and took him to Avila. Possibly, by that loyalty, the king will decide there to celebrate – in 1187 – the first Courts of Castile. In the twelfth century it had about three thousand inhabitants, of whom 120 were knights.

Fernando III the Holy confirmed in 1226 the jurisdiction of Fernán González for the Three Houses of the Olmeda (San Esteban, Osma and Gormaz). Alfonso X was in the town twice towards 1239 and included the Legend of the Flock of Cascajar in his Cántigas of Santa Maria. In the fourteenth century the town was greatly affected by the plague. Under the reign of John II was created in 1423 the county, with Valido Don Álvaro de Luna as first count. In 1444 a School of Grammar is created and in 1474 the town passes to hands of the Marquess of Villena; The neighbors followed in 1492 to the war in Granada.

In the change of century XVI to XVII the bubonic plague and a drought that carries also the typhus reduced its population. That explains the San Esteban customs of the Concordia, or to take to the Virgin of Rivero in rogativa. In 1660 he received the visit of Felipe IV and his daughter Maria Teresa and in 1679 they participated in the reception procession to Maria Luisa de Orléans, future wife of the king Carlos II.

What to see in San Esteban de Gormaz

As you approach the village from the south you can see the ruins of the long Muslim fortress linked to the memory of the Cid, which dominates the river Duero. If you climb to them, in its western part, you will find the mysterious Lairón well, which is said to lead to the exterior, up to the Douro River.

It is in the river where there is the monument that gave strategic importance to the town and that motivated two centuries of struggles for its possession. This is the medieval bridge installed in the best ford of the Duero for many kilometers, which is why the town was called “The Gate of Castile”, because it could prevent an enemy army crossing it. To facilitate the passage of trucks the bridge has undergone so many reforms that barely maintains some of its medieval configuration. In the river there is a zone suitable for the bath to which it has been adapted shower and a green space for the enjoyment of the bathers.

The most important visit to San Esteban de Gormaz is the Church of San Miguel, built in 1081. It is the oldest Romanesque church in Spain with porticoed gallery, a beautiful and sober gallery of seven arches of half a point on Columns that served as a model for other temples in the province. Its capitals contain anthropomorphic motifs, turkeys, crenellated cities, chess abacuses and, on the inside, horses and lions. In one of its canecillos appears the date of 1081, although some authors delay its production to 1111. It consists of a single nave attached to the staggered headboard in the presbytery and a semicircular apse.

The Church of the Virgen del Rivero also Romanesque, was built in the twelfth century. Her Virgin has been taken out in the prayers to ask for rain or serious calamities 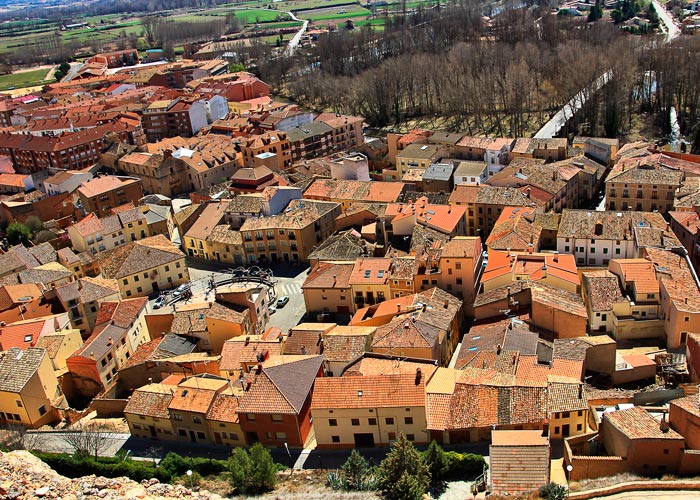 Aerial view of the town

Following the course of the Duero from the city you will reach a space of leafy woodland where you can find the Ecomuseum Molino de los Ojos. It houses an exhibition on the milling and cereal ecosystem with implements and other utensils donated by the inhabitants of the town. The mill was built in 1784 by the Marquesa de Villena and Countess of San Esteban de Gormaz. It ceased its milling activity in 1956 but remained active until 1960 to control irrigation. In this environment is the Theme Park of the Romanesque of Castile and Leon. By means of models of the Romanesque temples of the autonomous community and audiovisuals the best works of this architectural and artistic style are known.

Rejas de San Esteban (10 km), declared BIC village, treasures, in addition to its popular architecture, two exceptional Romanesque churches: San Martín and San Ginés. In Villálvaro (12 km), the church of La Virgen de las Lagunas, also Romanesque, stands out. In Langa de Duero (18 km away) the Castle and the Parochial Church are conserved, gothic reconstructed in the XVII. Also interesting are the churches of Berzoza (23 km), Alcozar (15 km) and Miño de San Esteban (14 km). In Castillejo de Robledo (29 km) the ruins of the Castle and the Church of the Assumption, Romanesque of the XII century, declared National Monument, in which some of its canecillos present / display erotic motifs.

And finally in Gormaz (to 23 km), are the ruins of the enormous Castle that reaches a perimeter of almost 1 km. It was built at the end of the 10th century on previous remains under Al-Haquem II and served as a prison in time of the Catholic Monarchs. Atauta (7 km) has the largest set of wineries in the region with Vino Ribera del Duero with D.O.

Berlanga de Duero
[vc_row][vc_column][vc_custom_heading text="Manor of the Cid and a Mozarabic wonder" font_container="tag:h2|text_align:left|color:%23000000" google_fonts="font_family:PT%20Sans%20Narrow%3Aregular%2C700|font_style:700%20bold%20regular%3A700%3Anormal"][vc_column_text]This village of the "Desert Más información

Medinaceli
[vc_row][vc_column][vc_custom_heading text="The “city of heaven” of Almanzor and the dukes" font_container="tag:h2|text_align:left|color:%23000000" google_fonts="font_family:PT%20Sans%20Narrow%3Aregular%2C700|font_style:700%20bold%20regular%3A700%3Anormal"][vc_column_text]Located on a high Más información