Beautiful and not very touristy, the capital of Soria has a peculiar charm that was praised by writers. It dazzled Gustavo Adolfo Bécquer, Miguel de Unamuno, Gerardo Diego and Antonio Machado. The latter defined it as “mystical and warlike”. It is a little frequented destination, pleasant in the less cold months for its walks along the banks of the Duero River.

Plan your stay in Soria

The city invites to walk and dream, something that could inspire so many creators. Among the places that must be seen in Soria, the San Pedro Concathedral stands out. Also the Church of Santo Domingo, with its interesting reliefs, as well as the Numantino Museum and its attractions on the banks of the Duero. Among them are the Monastery of San Juan del Duero, its medieval bridge and the Visitor Centre of the History of Soria and the Duero. The large number of interesting temples can extend the visit to a day and a half.

The local gastronomy and the best places to stop are in the pages about Sleeping and Eating in Soria city.

Soria’s history is very interesting and worth reading before knowing what to see in Soria. Thus, the first documentary reference is from the year 869. Then the Soria people, led by Suleiman ben Abus, rose up against the Emir of Cordoba. However, their origins go back to the Arevacans of Numancia. During 133 B.C. the Romans defeated them thanks to Scipio Emiliano, who would become known as Numantine. The name of the town is related to the river Duero, Dauria in Latin, from which the present name would derive.

During the eighth to eleventh centuries the area between the Sistema Central and the Duero was a disputed territory, marking the boundaries between Christians and Muslims. After the disaster of the Muslims in Calatañazor and the death of Almanzor in Medinaceli in 1102, Soria fell into the hands of the Castilians. Around 1109, after the marriage of the Aragonese King Alfonso I el Batallador with the Magpie Queen of Castile, the consort king repopulated it with his followers. He kept control of it until 1134. On this date it is again controlled by the Castilians.

In 1158 King Alfonso VIII of Castile was born in Soria. The 12th and 13th centuries were of continuous expansion, due to the increasing movement of sheep. The animals came from the south of the Central System through the ravines. They came to Soria to graze and be sheared in summer. Their wool was exported through La Rioja and Burgos to the Cantabrian ports and from there to the north. Thus, on the banks of the Duero and other rivers in the area you can find traces of the wool washing places. 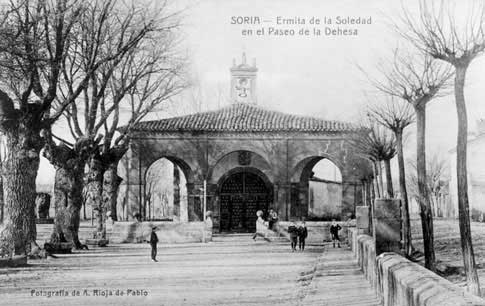 Due to its strategic location between Castile, Aragon and Navarre, Soria was the scene of the succession struggles of the fourteenth century. However, it also continued to prosper, as it was the head of several royal ravines. The Jews actively participated in this commercial activity until their definitive expulsion in 1492. When the nobility came to reside at the Court, during the 16th, 17th and 18th centuries, there was a gradual economic decline. It was only mitigated by the wool trade. This prosperity allowed the palaces and mansions that are now beautiful places to see in Soria to be built.

The Soria capital was the scene of important warlike episodes during the War of Succession. For example, in 1707 its population chose Felipe V. The anti-Napoleonic uprising of 30 May 1808 is also noteworthy. At that time, the population was able to expel the French garrison. The Gauls would therefore demolish its walls and sack the city.

This process impoverished the city, which declined rapidly in 1836 with the abolition of the Mesta. Such a measure meant the collapse of Soria’s livestock. In 1959, Soria was compensated for a historical disaster with the Burgo de Osma. This was achieved when the bishopric moved to the capital of Soria, declaring the temples of both to be concahedral. Nowadays, Soria is a small and peaceful city. It preserves its historical-medieval character in its streets and its numerous Romanesque buildings.

What to see in Soria

The visit on foot for what to see in Soria can start with the Alameda de Cervantes. A traditional walking area, it is presided over by the popular “Tree of Music”, a musical temple raised among the branches of an oak tree.

The Numantino Museum, founded by Alfonso XIII, is an interesting place to see in Soria. It includes pieces from the Palaeolithic to the modern era. It also has the remains of the Celtiberian necropolis of Soria and the Roman sites of Tiermes, Uxama and Numancia. In front of it stands the Ermita de la Soledad (17th century), a simple construction that houses the Cristo del Humilladero.

Continuing towards the historical centre, in the Calle de los Caballeros we find the Church of San Juan de Rabanera (12th century). It is a Romanesque temple with a cruciform floor plan and Byzantine and Gothic influences. Opposite is the building of the Provincial Council, with its gallery of statues of famous Soria people.

A little further away, to the south of the Plaza Mayor, the Church of Nuestra Señora del Espino is undoubtedly a temple to be seen in Soria. It was built in the 14th century and reformed in the 16th century. It was also used in the 19th century as the headquarters of the French troops. Attached is the small cemetery where the remains of Leonor, the young woman from Soria who was the wife of Antonio Machado, lie. Next to the church, an old elm tree with a plaque depicts the verse of the tree “split by lightning”.

From here you can access the ruins of the medieval castle through the steep park path where the Parador Nacional de Turismo is also located. The Plaza Mayor, in the Castilian style, is the main centre of the old quarter of Soria. Here you will find the Town Hall, installed in the Renaissance building of the Twelve Lineages. It also contains the old Audiencia, a porticoed building from the 18th century that houses the Cultural Centre, and the Church of Santa María la Mayor. It preserves from its Romanesque predecessor the façade, part of the tower, the apses and a tomb. Inside, the main altarpiece stands out.

Going back to the west, to the Ramón Benito Aceña square, there is a great concentration of taverns and good atmosphere. In the Plaza de San Clemente, the Palacio de los Ríos y Salcedo (16th century) stands out. It has a plateresque façade and a beautifully decorated window. It is currently the seat of the Provincial Historical Archive.

Turning towards the north you can see the Instituto de Bachillerato, where Antonio Machado taught. Another example of sacred architecture to be seen in Soria is the Church of Santo Domingo, with a 13th century façade, considered one of the best in all of Soria’s Romanesque architecture. It is decorated with blind arches supported by stylised columns on the sides of the doorway. The biblical figures on the capitals and the archivolts surrounding the tympanum where the figure of God is located stand out. 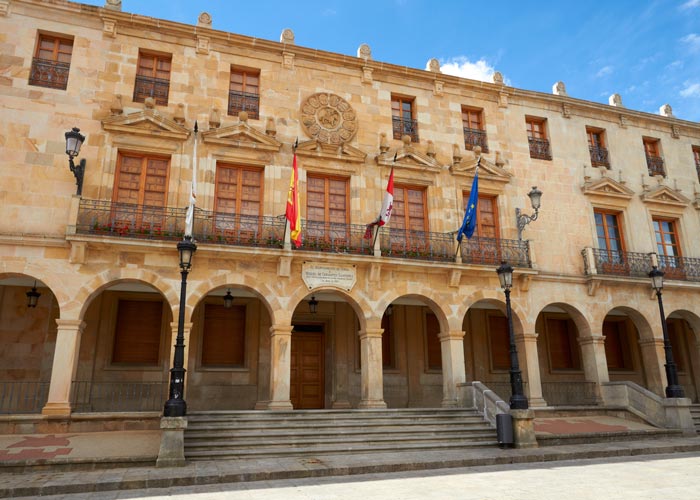 Next to Santo Domingo are the walls of the old Convento de la Merced, of which Tirso de Molina was prior. Today it is the headquarters of the Duques de Soria Foundation. The cloister and the church are preserved. Nearby is the Palace of the Counts of Gomara (16th century). This Renaissance building was used as a courthouse.

From Calle del Carmen you can access Calle Real, a typical medieval street. Together with the adjacent Calle de Zapatería, it houses numerous Gothic houses with the coats of arms of the old nobility of Soria. Continuing through San Agustín, the ruins of the Church of San Nicolás (13th century) can be seen.

A little further on, the Concatedral de San Pedro is an essential monument to see in Soria. It was built towards the end of the 12th century and rebuilt in the 16th century. It has a hall plan with five naves, combining Romanesque, Gothic and Renaissance elements. Its plateresque façade is particularly interesting. Inside it houses altarpieces, a painting by Titian and the triptych of The Crucifixion, a Flemish work from 1559.

Another great example of art to see in Soria is the Cathedral Cloister, of Romanesque style, which has been declared a National Monument. It is characterised by three sections of semicircular arches supported by carved columns. Also of interest are the door of the old refectory and the entrance to the chapter house.

From here you can continue to the other side of the river by crossing the medieval stone bridge. At this point, it is worth stopping at the Interpretation Centre of the History of Soria and the Duero, installed in an old grain warehouse.

In a pleasant walk between poplars and on the banks of the Duero, you can access the Monastery of San Juan de Duero (12th century) and the Church of the old Monastery of San Polo (13th century). Here, Gustavo Adolfo Becquer placed the legends of the “Rayo de la luna” and “El monte de las ánimas”. The Monastery has a temple with a single nave and rectangular apse and houses a small museum inside. But the most striking thing is its Cloister (13th century), with interlaced arches, a Mudejar work of oriental influence. One of the most inspiring things to see in Soria.

At the end of the walk stands, in a landscape of singular beauty, the Hermitage of San Saturio. It is a baroque temple on a rocky promontory built over the cave where this saint, patron of the city, lived. His relics are venerated in an interior decorated with frescoes by the Soria painter Antonio Zapata. On the other side of the river, an Ecocentre has been installed and an old wool washhouse houses the Water Museum.

Castile and León, castles, churches, convents, palaces, Soria
It may interest you...