Court of suitors, princes and kings in the Aragonese border

This frontier square was a court of pretenders to the throne and princes during its long stage of border splendor (until the personal union of the Catholic Kings). Its medieval appeal is reinforced with urban sculptures, gardens, walks and cultural events related to sculpture.

Plan your stay in Almazán

You can spend the whole morning exploring the village’s old town, and then stroll through the beautiful gardens with contemporary sculptures and stroll along the Douro River, watching from the bottom of the wall for the morning wall. The rest of the trip can be a day trip to the city of Soria (if you return to Burgos), to Medinaceli (especially if you turn towards Madrid or Zaragoza as you take the road) and Berlanga de Duero and Burgo de Osma (If you return in the direction of Segovia).

In 153 a. Of C., in its surroundings settled the Roman camp governed by the consul Nobilior, that had an important paper during the siege to Numancia.

Almazán means in Arabic “walled plaza”, appropriate name for a place very disputed between Christians and Arabs; Reconquered in 1068, the Muslims recovered it, and until the year 1098 the king Alfonso VI does not consolidate its control and does the first repopulation. In 1109 who repopulated with Aragonese was Alfonso I of Aragon (son-in-law of Alfonso VI for having married his daughter, Queen Urraca of Castile) who also gave the name of Placencia; But that king the Villa was reintegrated in the kingdom of Castile recovering its Arab name.

There, in 1158 King Sancho of Castile “the Desire” -the shortest in history, since he ruled only twelve months- donated the castle of Calatrava (very close to Ciudad Real) to the Cistercian monks, creating the Order of Cavalry Of Calatrava.

In 1289 the infant Alfonso de la Cerda conquers Almazán to its rival the king Sancho IV of Castile; Established its “capital” there with a Court supported by the Aragonese. There he remained with his faithful vassals until 1305, when he returned it to the son of his rival, King Ferdinand IV.

In 1369, when he was proclaimed King Henry II of Trastámara, he gave Almazán as a prize to his main champion: the French gentleman Bertrand Du Guesclin (who was said to have tripped Pedro I during the fight in which he was killed by his stepbrother Enrique). Du Guesclin would sell it later.

In 1375 there the deposed king Jaime IV of Majorca died; For Almazán was assigned as a residence by the Castilians after being defeated by his relative, King Pedro IV of Aragon. That same year Pedro IV the Ceremonious one will go to sign the “Peace of Almazán” with Enrique II of Castile.

In 1388 the town was part of the dowry given to Catherine of Lancaster – granddaughter of the murdered Pedro I of Castile – to marry with the infant Enrique – grandson of the assassin of that one, Enrique II -; An agreement by which both became the first princes of Asturias. The couple would reside in Almazán for some time.

King Henry III in 1395 gave Almazán to Don Juan Hurtado de Mendoza, giving rise to the Señorío de los Mendoza. Between December of 1462 and January of 1463 there resided with its Court the king Enrique IV of Castile. And there he danced with his “sad queen” -Juana de Portugal, suspected of adultery-the French ambassador; So impressed he was left with the experience, that he made the solemn vow not to return to dance with another lady in his whole life.

Prince Ferdinand of Aragon passed by incognito in 1469 during his trip to marry Isabel in Valladolid; Returning Fernando like king in 1474; In 1496 the kings kept their itinerant court there for three months. In 1512 Diego Laínez was born, who would be one of the protagonists of the Council of Trent and II General of the Jesuits. 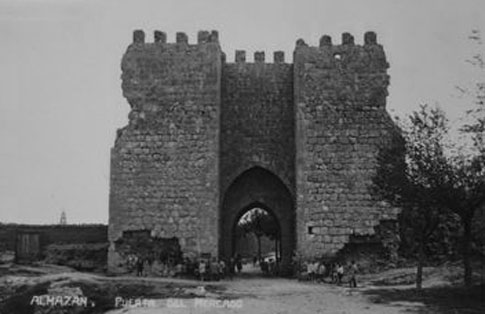 Door of the Mercado

In 1648 the writer Tirso de Molina died there and was buried in the convent of La Merced. The 10 of July of 1810 was subjected to a wild sacking and then burned by the French, destroying 166 buildings. In spite of this it was the base from which the general Jose Joaquin Durán prepared the reconquest of Soria. Until 1811 the town was a jurisdictional manor of the Marquis de Almazán and the Count of Altamira, one of the titles with more properties in Spain.

What to see in Almazán

You can spend the whole morning exploring the village’s old town, and then stroll through the beautiful gardens with contemporary sculptures and stroll along the Douro River, watching from the bottom of the wall for the morning wall. The rest of the trip can be a day trip to the city of Soria (if you return to Burgos), to Medinaceli (especially if you turn towards Madrid or Zaragoza as you take the road) and Berlanga de Duero and Burgo de Osma (If you return in the direction of Segovia).

We start the visit to the old Almazán looking at the hill where the old town is. If you arrive by the roads of Zaragoza, Madrid or Burgo de Osma you can leave the car in General Martinez street and suburbs, from there to climb up the walled enclosure by two possible traditional routes: through the Puerta de Herreros (if you Up there to the right is the Church of Santa Maria de Calatañazor (from the sixteenth century, with an interesting altarpiece) or the Puerta de la Villa.

Once in the Plaza Mayor, we contemplate the imposing facade of the Palace of the Counts of Altamira– Elizabethan Gothic style with a Renaissance cover added in the sixteenth century – occasional residence of the Catholic Monarchs. Enter first in the Office of Tourism located in its low; There is to see the triptych of Memling and the excellent audiovisual. Then visit the palace; Taking advantage of the gallery with good views over the Douro River and its gardens, with a view of the wall. The remains of the wall form an incomplete “U” of the hill; Formed by the canvas around the Market Gate -whisped by two rectangular turrets- the emblematic cylindrical tower (on the corner of the River Duero) called the Rollo de las Monjas (because it is located next to the Monastery of the Poor Clares) Parallel to the river Duero, to the Palace, the Church of San Miguel, the Puerta de la Villa and the Puerta de los Herreros – both protected by cylindrical turrets.

Going back to the Plaza Mayor – presided over by the statue of Diego Laínez (great theologian and companion of San Ignacio de Loyola) – we observe the Town Hall and we visit the important Church of San Miguel (from the middle of the 12th century, National Monument) . This has a mix of styles that begins with its unusual octagonal belfry of Muslim style. The apse has the peculiarity of being deviated from the normal orientation of the ships, in order to settle better on the ground. The exterior decoration of the apse combines the Cistercian and Lombard-Catalan styles. Other oddities are its central Hispano-Muslim dome, and the late-12th-century bas-relief depicting the martyrdom of St. Thomas of Canterbury. The church was declared a national monument.

Next we recommend to leave the outer zone to walk the walk that surrounds the wall, and that allows to see the panoramic of this one and the Park of the Arboleda on the Duero. Surrounding the wall completely re-enters the village through the Market Gate. If there is no hurry you can turn right and go up in the direction of Parque El Cinto (where the Muslim castle was) a garden viewpoint with a statue of Jesus of Nazareth. Going down the curious street called “Next to the bell tower” and turning to the right we end at the Campanario Square where the Church of Our Lady of the Bell tower – with a Romanesque head with three semicircular apses, was added the body in the XVII- . Down the street Los Olmos we find a palace (from the sixteenth and eighteenth centuries) adapted as Cultural Center Tirso de Molina. In front is the Church of San Pedro (eighteenth century), with three naves, with a baroque altarpiece and a carving of the Pieta inside. Returning in front of the cultural center, if we go down El Fraile Street we will see a monument to the Jesuit Diego Laínez, located in front of the Romanesque San Vicente Church (12th century), converted into the San Vicente Cultural Center, where symposiums sculpture. On leaving, following the Calle de las Monjas, you access the convent of the Clarisas (16th century) converted into a space for events. Going back down that street until the end you come to the Plaza Mayor. 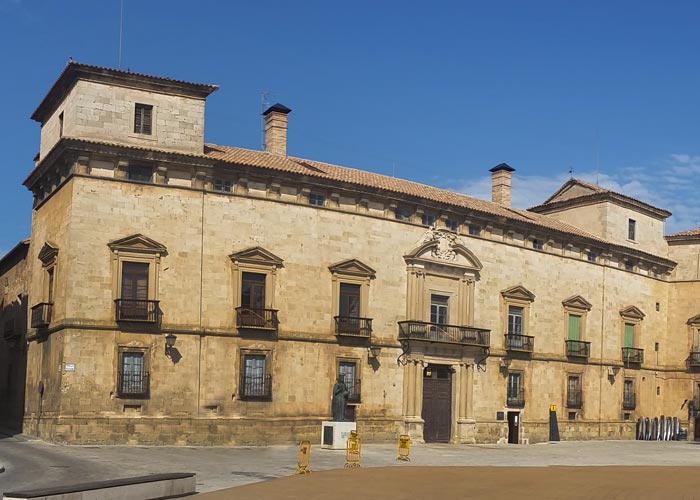 Palace of the Condes de Altamira

After lunch and recovering strength we recommend to return to the viewpoints over the river from where some stairs lead down the hill from the old town to a parallel walk to the river with a walkway that replaces the medieval bridge. In the Parque de la Arboleda there is the Museum of Outdoor Sculpture with pieces by significant artists such as Miguel Isla, Seiji Mizuta, Hans Reinders, Steffen Bachmann or Seung-Woo Hwang. From there there is a route of more than 4 kilometers between trees and fountains; Excellent for an afternoon.
Also outside the walls – in front of the Gate of the village – is the Hermitage of Jesus Nazarene; With neoclassical cover and octagonal floor, houses the image of the Nazarene, patron of the city. Also nearby are the ruins of the Convento de la Merced, dating from the 17th century and declared a National Monument; This one conserves the facade, part of the cloisters and the greater chapel. Friar Gabriel Téllez, better known as Tirso de Molina, wrote and died there.