On a rocky ridge, in Altos de Barahona and looking out over the Escalote River, sits a small, completely walled medieval village, known as Rello. It is located in the south of the province of Soria and belongs to the region of Berlanga. This village has one of the best preserved medieval features in Castile and Leon, to the extent that it has been declared an Asset of Cultural Interest.

The walled complex of Rello at the top of the mountain is worthy of a fairy tale, where the natural beauty of the surrounding landscape stands out. But there is no more incredible sensation than to walk through its narrow, cobbled streets, which, together with the castle and its towers, take all visitors back to an ancient era from the moment they pass through the only and main entrance to the village.

However, very few people have the privilege of knowing about the existence of this extraordinary and peaceful place, today practically forgotten, where only 15 inhabitants remain.

The majestic wall of Rello

If Rello still preserves the medieval essence hundreds of years later, it is precisely because of its imposing wall. The entire area where the settlement is located is completely fortified. The wall is flanked by various towers and topped with battlements, which are perfectly preserved. In fact, of all the villages and towns in Soria established on a rock, such as Medinaceli, Calatañazor or Peñalcázar, Rello is the one that has best preserved its entire walled enclosure. 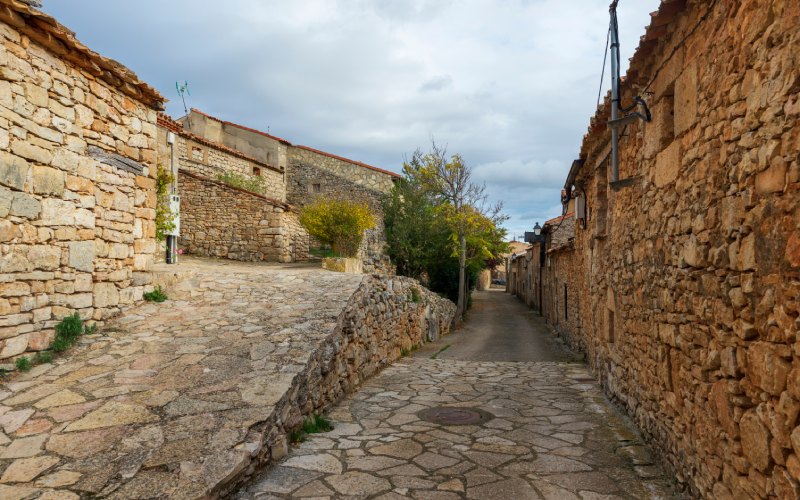 The interior of the medieval Rello | Shutterstock

Although there is little documentation about the origin of Rello, it contains a very important historical legacy under the vestiges of its stone walls. The settlement of the wall is said to date back to the 12th century, at a time characterised by continuous Christian and Muslim invasions. This being so, it is not surprising that it was decided to create a fortified perimeter to protect the inhabitants of the municipality. Later, in the 15th century, the fortress was reformed, when Rello had already reached the lordship of the Count of Coruña.

At one end of the wall is the Rello Castle. It is believed that it could have been built in the 15th century; although some historians point out its existence already in the 11th century. Today you can still see the remains of the keep, which was half destroyed by a lightning, a cistern and the wall that separated the castle from the rest of the old town. 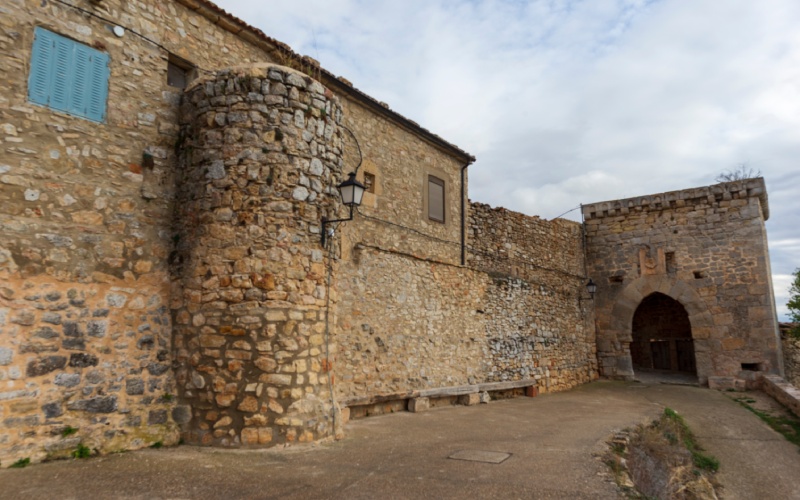 It can be accessed through two fortified doors. Both contain a heraldic coat of arms with an eagle, from the former Count of the village, Lorenzo Suárez de Mendoza; the 4th Count of La Coruña. He was a nobleman who was a direct descendant of Iñigo López de Mendoza, Marquis of Santillana. In 1580 he was appointed by Philip II as the fifth Viceroy of New Spain.

It is strange to walk through its streets and not hear: “el rollo de Rello es de yerro”. This tongue twister refers to the iron bombard in the village’s main square, a 15th century piece of artillery before the cannon. It constitutes an identity element for the municipality. 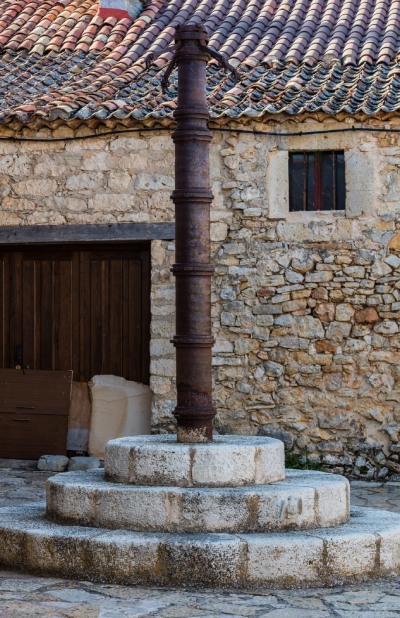 The Rollo represented the administrative category of the village of Rello. Also, according to its inhabitants, this iron bar was a place of atonement for the faults committed by prisoners; serving as an example and lesson for the people of that time. In fact, the word “yerro” means a fault or crime committed out of ignorance or malice; against divine and human laws.

The Muslim Watchtower of Tiñón

Legend has it that the caudillo Almanzor went there to die on his return to Medinaceli from Calatañazor; where he had been defeated. The watchtower of Tiñón is another of the things to see in Rello; as it represents one of the most significant elements of the municipality. Indeed, it may be the most appreciated of them all because of the historical value it acquires. 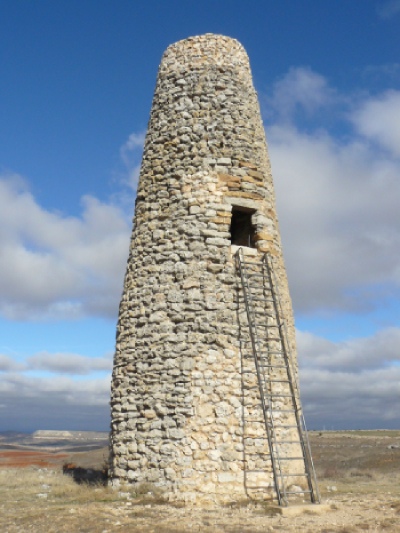 To understand the meaning of the watchtowers, one must go back to the Muslim era in the Iberian Peninsula, during the 10th century. Almost two hundred years after the conquest of the territory, Islam retreated to the Duero Valley; following the advance of the Christian kingdoms to the south. Faced with this problem, the Caliphate decided to reform its defensive systems by building a new system of surveillance and military observation through fortified towers, known as atalayas. The main objective of their construction was to provide a high and secure site; from which to control the territory in case of enemy invasion.

At present, there are more than twenty Muslim watchtowers in the province of Soria, strategically located in the Duero Valley. These towers thus formed an integral part of the fortified route of the Islamic cities. In the case of the Watchtower of Tiñón, it is dated between the 9th and 10th centuries.

On the southern side of the wall there is a circular tower that controls access to the Escalote River; which was used to collect water. Hence its name, the Torre del Agua (Water Tower). In 2012 it was declared an Asset of Cultural Interest with the category of Monument. Its location, subordinate to the wall in the direction of the river, makes some authors doubt its Islamic chronology and whether it was really another watchtower. However, the characteristics of its construction link it to the Muslim period, due to its circular plan and cylindrical elevation.

The beauty of the scenery of Los Altos de Barahona

The privilege of a village like Rello is that it not only possesses the artistic and historical beauty of its streets, but also receives the rich scenery of Altos de Barahona, where its wall is located. Its views are impressive both from the top of its walls and from the road that leads to the region. 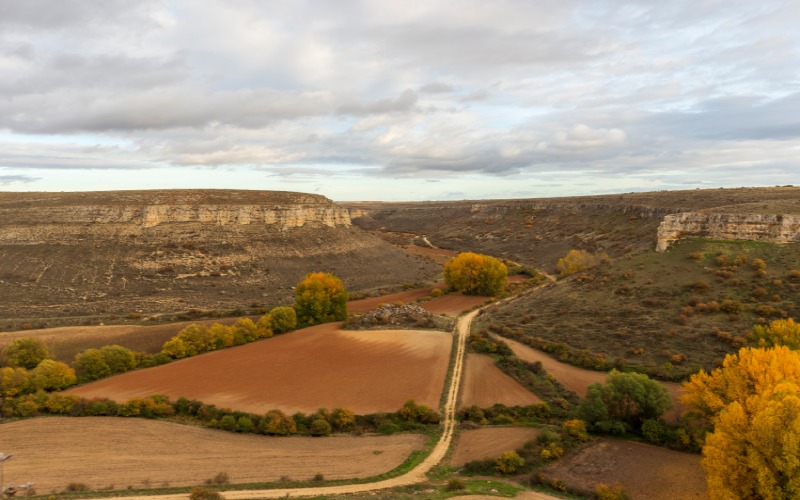 Despite being a great unknown to many, the Altos de Barahona are considered the most important moorlands in Spain; with great ornithological value. Thus, the place is designated as a Special Protection Area for Birds; as well as being declared a Site of Community Interest (SCI). It also forms part of the Natura 2000 Network. In this area you can also visit other towns such as Torrevicente, Barcones, Marazovel, Alpanseque and Pinilla del Olmo.

Castile and León, castles, Middle Ages, Soria, walls
It may interest you...