The hill of the epic sieges

Situated on Cerro de la Muela, in the municipality of Garray, are the ruins of the ancient city of Numancia, an international symbol of the struggle for independence of the peoples against the empires for their legendary resistance against Rome. After more than two millennia, its ruins recently resisted a third siege, this time of the urbanistic speculation.

What to see in Numancia is the small Interpretation Center, then stroll through the site; Then it is worth going down and touring the village of Garray. This can take us about three hours; It is normal to continue the trip by visiting the city of Soria. Those who decide to stay to sleep in Soria can book active tourism activities in places as beautiful as Laguna Negra and Círcos Glaciares de Urbión, located in the vicinity of the typical town of Vinuesa. Those who return to Madrid or Segovia can spend the day in places on the way, such as Burgo de Osma and Calatañazor; Or visit natural areas such as the Sabinar and La Fuentona and the Río Lobos Canyon.

In 2004 the project of the industrial estate Soria II was started on land located near the camp site and the monastery of San Juan del Duero. This triggered a legal and media battle between the Marichalarfamily – owner of the land and determined to preserve at all costs the archaeological sites and the landscape environment – and the regional and local political authorities, which sought to expand the supply of land without any Constructed in the other polygons of the city, still today half empty. In 2013, a Supreme Court judgment was issued in favor of the Marichalar, stopping the project for violating the policy of sustainable growth that has been giving international relevance to the province of Soria. TheArchaeological Zone of Numancia and the Campamentos and Cerco Romano are included in the red list of endangered heritage elaborated by Hispania Nostra, since there are three hundred houses built next to the Roman camp of Campo Real and four domes of concrete of sixty meters of height in the Called “City of the Environment”.

It was soon rebuilt and repopulated Numancia by the Romans, since Roman remains have been preserved since the 1st century BC. Of C. All the streets – except those of Cardo and Decumano – orient east-west looking to cut the northern wind or wind. They were houses of three pieces, of stone, adobe and braided of rye by roofing. There are sections of the wall and remains of the Roman dwellings of the time of Augustus, their cisterns, as well as vestiges of various public constructions. Twelve explanatory panels guide the visit. In the old schools of Garray opened the Archaeological Aula El Cerco de Numancia, which recreates Celtiberian and Roman cultures in the 2nd century BC. By means of models, panels and reconstructions.

In the municipality of Garray is the important Hermitage of the Holy Martyrs Nereo, Aquileo, Pancracio and Domitila. The first thing that draws attention in this National Monument is the name, because they are characters outside the Spanish religious tradition, not knowing the reason for their choice. The temple was built, in Romanesque style in 1231, lying on the side of the hill. From the original is the head, built in ashlar stone, with a rectangular presbytery and a semicircular apse covered by two columns with capitals of leaves and pine cones. In it they emphasize the canecillos with figures of birds, quadrupeds, pineapples, geometric motifs and an eagle of silense influence. It must have had a role of fortification as the apse has loopholes or saeteras, surrounded by a decoration of diamond tips. The cover of the temple is also original Romanesque, consists of two archivolts, the exterior with thick drab and the interior decorated by pearly semicircles; In it it emphasizes the tympanum with five great rosaceous flowers of different size, also the band of arches with human heads. 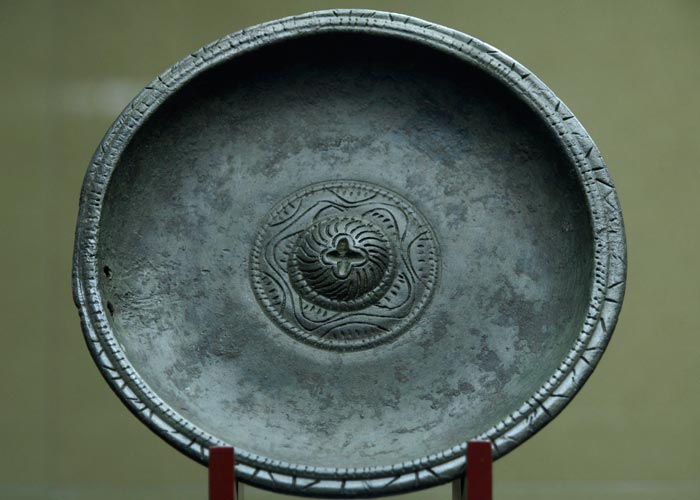 Ruins found in the area

The Church of San Juan Bautista was built in the second half of the 16th century. It has a half-point cover of Romanesque style and a baptismal font, located in the baptistry of the same style. The rest is later.

What to see in Numancia y Garray

What to see in Numancia is the small Interpretation Center, then stroll through the site; Then it is worth going down and touring the village of Garray. This can take us about three hours; It is normal to continue the trip by visiting the city of Soria. Those who decide to stay to sleep in Soria can book active tourism activities in places as beautiful as Laguna Negra and Círcos Glaciares de Urbión, located in the vicinity of the typical town of Vinuesa. Those who return to Madrid or Segovia can spend the day in places on the way, such as Burgo de Osma and Calatañazor; Or visit natural areas such as the Sabinarand La Fuentona and the Río Lobos Canyon.

It was an important celtíbera city, that the arévacos fortified on a hill. In the year 153 a. The inhabitants were in practice rebellion, because of the bad government to which the Romans subjected them; Reason for which they decided to give shelter in its walls to some warriors of the tribe of the beautiful ones, coming from the city of Segeda (region of Calatayud) and that were fugitives of the Romans. And it would be one of these, Caro de Segeda, who led the numantinos and beautiful, defeating the 23 of August of the following year to the 30,000 legionaries commanded by the consul Quinto Fulvio Nobilior. Using new troops supported by elephants, the consul unsuccessfully besieged Numancia but a surprise outing of the Arévacos caused the Romans about four thousand dead and the loss of several pachyderms. Shortly after the consul was dismissed in his position. After almost twenty years without being able to submit them, the Senate of Rome conferred the task to general Publio Cornelio Scipio Emiliano, called “The African minor.” He planned his campaign systematically, and between years 134 and 133 a. Of C. ordered to build around Numancia a siege of 9 kilometers of length, with towers, moats and palisades. The isolation caused the famine and diseases of the settlers, obtaining their surrender after eleven months. But his prolonged “numantine” resistance, and the fact that most decided suicide rather than slavery, made the chronicles of the Romans themselves present their inhabitants as heroes; Scipio was only able to bring fifty Roman Numantins to Rome as proof of his deed.

Like the neighboring city of Soria, Garray must have been repopulated in the 11th and 12th centuries. Its first settlers must have been of Basque language, because the two possible origins of its name are Basques: Garai (“elevated place”) to be located in the slope of a hill, or because its settlers were dedicated to the transport (the word garra ) Also plausible given the immemorial mercantile link of Soria with the Basque ports.

Miguel de Cervantes immortalized it in his dramatic work The siege of Numancia released in 1585. With that gesture the Spanish resistance to the French was identified in the War of the Independence, giving name to a unit of soriano volunteers.

The site of Numancia was discovered in 1862 by the architect and archaeologist Eduardo Saavedraafter several theories placed him in Zamora. Adolf Schulten delimited the Roman encampments outside the city due to Scipio (Castillejo, Travesadas, Valdevortón, Peñarredonda, La Rasa, Dehesillas and Alto Real). The deposit was declared National Monument in 1882.

The hill of Numancia belonged for centuries to the lineage of the Marichalar, until Luis de Marichalar -vizconde de Eza- donated it to the state in 1917. Archaeological excavations had begun a year earlier and continue to this day. 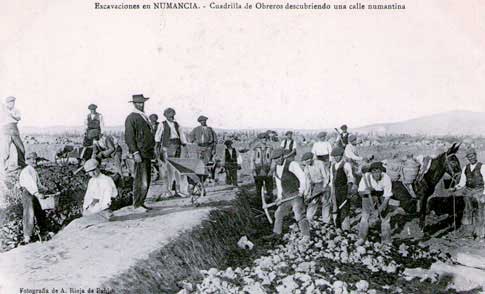 Berlanga de Duero
[vc_row][vc_column][vc_custom_heading text="Manor of the Cid and a Mozarabic wonder" font_container="tag:h2|text_align:left|color:%23000000" google_fonts="font_family:PT%20Sans%20Narrow%3Aregular%2C700|font_style:700%20bold%20regular%3A700%3Anormal"][vc_column_text]This village of the "Desert Más información

Medinaceli
[vc_row][vc_column][vc_custom_heading text="The “city of heaven” of Almanzor and the dukes" font_container="tag:h2|text_align:left|color:%23000000" google_fonts="font_family:PT%20Sans%20Narrow%3Aregular%2C700|font_style:700%20bold%20regular%3A700%3Anormal"][vc_column_text]Located on a high Más información