The disputed town of the Serbian bishops

Around the ancient Uxama, strategic scenario of more than a century of fierce battles between Moors and Christians, a borough grew very well governed by the bishops who succeeded it. Nowadays it is a beautiful and well preserved town, with a great cultural and gastronomic offer.

With a cathedral, two important adjoining fortified enclosures and numerous interesting buildings you have to book a full day to enjoy everything there is to see in Burgo de Osma. To those who are a little intrepid we recommend that – after crossing the river bed to the old castle grounds – go up to the hill where the ruins of Osma are (by car if you are not a fit hiker) and imagine how it was Primitively the Muslim citadel. For the next day of the getaway there are many good options. An excellent full day excursion is to visit the fortified Calatañazor and its beautiful Sabinar and the Natural Monument of La Fuentona. An option for hikers of any age is to walk the long Natural Park of the River Wolves Canyon. Returning to Madrid or Valladolid you can stop at the nearby town of San Esteban de Gormaz.

In the vicinity of the urban nucleus, are the remains of which was castro of the arévacos, Uxama Argaela. From the beginning of the 1st century B.C., this would be transformed into the Roman city of Uxama, nucleus of communications between Asturica Augusta León and Caesar Augusta.

It was one of the supports in the war of Sertorio against Rome, being destroyed by Pompeyo in 72 a. Of C. In rebuilding it they realized sophisticated works of infrastructure, like the brought of water from the birth of the Ucero river (20 kilometers to the north) by a gallery accessible by people. From the sixth century the Visigoths called it Oxoma or Osoma. It was an episcopal seat located in the castle grindstone, whose bishop John in 597 attended in Toledo the twelve Council.

In the tenth century the Arabs, who called it Wasxima, built a watch tower on a bastion of the first wall. In 912 the knight Gonzalo Téllez reconquered it, transferring the town to the neighboring hill, in the left margin of the river Ucero, constructing a castle and walling the locality of Osma.

In 939 the king Ramiro II of Leon and the Castilian count Fernán González defeated there caliph Abderraman III; But years later it would be taken up by the Muslims, who used it as a base in the Almanzor rides. Within a short distance, in Calatañazor would be defeated for the first time Almanzor in the year 1000, marking a point of inflection in the war. Count Sancho Garcia would receive it as payment for his services to the Soleyman leader in 1011. In 1088 King Alfonso VI began actively promoting his repopulation, reestablishing the diocese.

Out of the Muslim danger, a part of the population of Osma was established outside the third fortified enclosure, on the right bank of the river Úcero; Around the ruins of a Visigothic church dedicated to St. Michael. In 1101 also was installed there the new bishop of French origin Pedro de Bourges (later canonized like San Pedro de Osma); He took advantage of the foundations of that temple to build a Romanesque cathedral. Underneath was developed the nucleus of artisans and merchants dependent on the bishop, who formed the new Burgo de Osma. Towards 1240 the bishop Juan Domínguez ordered demolishing the Romanesque cathedral and to construct another bigger one in Gothic style.

In the middle of the fifteenth century the bishop Pedro de Montoya interfered in the internal struggles of Castile, trying to secure his position by building a wall in the Burgo; of which remain rests near the door of San Miguel.

In 1469, to the castle of Osma –located on the hill– approached disguised of merchant Ferdinand the Catholic, when he went to Dueñas to then marry in Valladolid with Isabel. A guardian shot a dart with his crossbow, and if it had been successful he would have changed the history of Spain. At the end of century XV the monarchs granted the señorío of Osma to the Duke of Uceda.

But this population was losing inhabitants in benefit of the new burgo governed directly by the diocese, located in the plain, to the other side of the river. In 1541 the new population gained prestige when the bishop inaugurated the University of Santa Catalina. Extending two centuries more stability and prosperity of El Burgo. 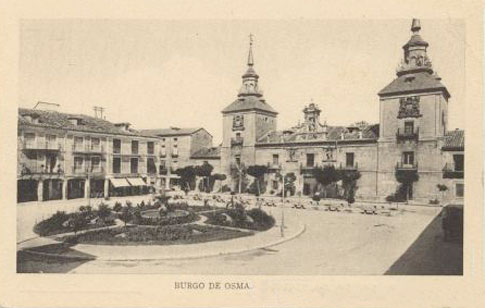 Plaza Mayor in an old photograph

In May 1808 a defense board was appointed in response to the events in Madrid. This caused that in the month of November it was assaulted by the French commanded by Marshal Ney. They sacked it during nine days, causing a famine. In 1811 the French left there a stable garrison, that was expelled in September of 1812 by the Spanish army.

Although ecclesiastical lordships were repealed in the Cortes of Cadiz, until the confiscation of 1836 lasted the predominance of the bishopric over the region; being then stripped of his property.

Burgo de Osma and the religion

Since the beginning of the thirteenth century, those responsible for the Collegiate Church of St. Peter the Apostle in Soria had been trying to persuade the Popes who deserved to be an episcopal seat. But the success in the management and the influence of the clergy of Burgo prevented it; Even after the provincial reorganization of 1833, in which Soria was declared provincial capital. The history of Burgo de Osma had to go through until 1959 when concatenates were declared to the two temples of the diocese of Osma – Soria.

Its historical center was declared Historic Artistic Site in 1993.

What to see in Burgo de Osma

When access by road the first important building is the old University of Santa Catalina (now a spa hotel), completed in 1549 by Bishop Acosta, whose coat of arms is on the facade next to the Emperor Charles V; Both flank the statue of the patron saint of the university.

It was in operation until 1778 and from 1811 until its final suppression in 1841. Inside there is a large patio. As a curiosity, in one of its columns of the right one can appreciate the rest of a graffiti from a student of the 19th century.

When arriving to the old town we take reach Calle Mayor, flanked by typical Castilian houses of brick with arcades on columns of stone and wood, that shelter from the cold and the rain in the harsh winters. If you continue you will end in the Plaza Mayor, baroque and porticada.

In it you will find the Town Hall, building of 1768 from which the civil power could attend to the bullfights that in that place were celebrated until the 20th century. In front is the Hospital of San Agustín, rebuilt in the 18th century, with two towers with spiers on both sides of the facade, presided over by an image of the saint between blazons. The building is Office of Tourism, temporary exhibition center and Archaeological Class Antiqua Osma. This offers an excellent tour from the prehistoric Uxama to the Christian city.

On Palafox Street there is also an important building to see in Burgo de Osma, the Bishop’s Palace; Built in 1515, has a curious double arch cover that has Muslim connotations. It is worth getting closer to see the reliefs of fantastic animals in the alfiz that surrounds the shield of the bishop.

Beyond is the building of the Gothic Cathedral, begun in 1232. It has a Latin cross plan with three naves of five sections each. It is covered with vault of warheads except for the apse with ribbed vault. In 1512 was added the Gothic cloister and in 1767 the Baroque tower of 72 meters in height, which is the symbol of the locality.

In the interior it emphasizes the major altarpiece (1554) due to Juan de Juni and Juan Picard and the plateresque grid that closes the central chapel due to Juan Francés (16th century). The sacristy and the chapel Palafox of the bedside were built in the 18th century by Juan de Villanueva.

It houses the Cathedral and Diocesan Museum installed in various units around the cloister; Also the sepulcher in polychrome stone of Pedro de Osma (1251), which is attributed many miracles and some legend in which he left the tomb, a marble pulpit, Renaissance stained glass, a double arcade with archivolts and beautifully sculpted capitals. In the sacristy you can contemplate the Beato de Osma (1806), a codex that reproduces the Commentary on the Apocalypse of St. John, by Beato de Liébana, illustrated with Mozarabic miniatures. 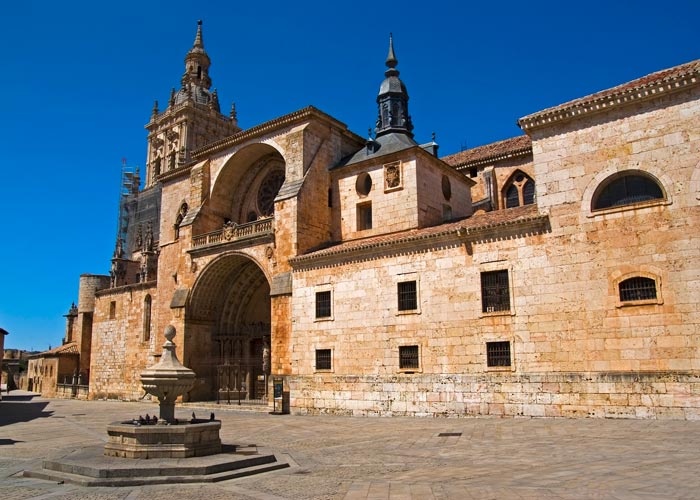 On the banks of the Ucero River, in Burgo de Osma, there is a walk that leads south to the medieval bridge and the Water Tower. It is one of the few visible remains of the third walled enclosure of the castle. Here was the old medieval Osma. If you are not an athlete, to access the ruins of the castle located at the top of the hill is better to go up by car. You can take the road So 160 towards El Enebral or SO 180 towards La Rasa.

Some of the walls are still built with masonry and ashlars. Also many carved stones of Roman origin to see in Burgo de Osma. Also its keep and the horseshoe arch at the west access. From there you can hardly distinguish the three walled enclosures and the buildings of the old Osma, located on the hillside, facing the river.

Castile and León, cathedrals, Soria
It may interest you...

The Castle of Gormaz: the largest Arab fortress in Europe
Krak des Chevaliers, the Loire or Edinburgh castles are world famous. Places known either for Más información