Crossing of roads and castle of intrigue

This episcopal manor was the seat of the Chancellery, Audience of the kingdom and residence of kings in the fifteenth century. His powerful bishop Arias Dávila built his emblematic castle, which later would be prison of the powerful Secretary Antonio Perez. Its unique main square will be repeatedly immortalized by numerous artists from the Zuloaga circle. It is the geographic center from which to travel throughout the province with lower cost of stay.

Plan your stay in Turégano

It is a beautiful town, quiet, and with excellent food at a good price. Besides a strategic place from which to cross the province. There are not many places to see in Turégano: the visit to the castle, church and the promenade can take us three or four hours. On the other hand, excursion options are numerous. A little further north you can see vultures and stroll through the Hoces del Río Duratón Natural Park. In Sebúlcor it is possible to sail in canoe or to make other modalities of active tourism. Less than half an hour away are other medieval beauties where you can spend half a day, such as Pedraza and Sepúlveda. It is also a good option to visit nearby Segovia at a lower cost than staying in the capital.

On the hill of the castle must have had a Celtiberian castro, some of whose remains are around its moat.

By the year 940 it was reconquered by Count Fernán González; His son reinforced the castle musumán with towers, calling Turrem Vegam that would be derived in Toroda, Toroganum and later Turégano; A strategic place for converging in it the roads of Segovia, Fuentidueña, Sepulveda and Pedraza.

In the turbulent year of 1123 the queen Urraca of Castile donates the town and its contours to the recently restored bishopric of Segovia and by that time the castle was rebuilt around the Romanesque church of San Miguel. In the middle of the fourteenth century King Pedro I confirmed the donation of Turégano to the Segovian diocese granting him ninety crossbowmen to defend the fort. At the end of the century the fortress became a frequent residence of the kings John I and John II; The latter regained control of the fortress, settled for at least six months a year the seat of the Chancellery and Audiencia del Reino and there held important tournaments among his knights.

By the confrontation between the bishops of Segovia and the town hall controlled by the knights of the city of Segovia the prelates resided in the palace of Turégano away from the capital. In the fifteenth century there was a succession of important bishops; Especially Don Gonzalo (who wrote the law book entitled Peregrina) and the humanist Fray Lope de Barrientos, professor of Theology at the University of Salamanca and tutor of the future Enrique IV. In 1461 Enrique appointed as bishop the young man of twenty years Juan Arias Dávila; This son of a converted Jew and Real Accountant showed his preference for Turégano and to have an early ambition and inclination to the intrigue, putting itself soon to build an impregnable castle. In 1473 the bishop was already a supporter of Isabella of Castile, welcoming to its Ferdinand husband of Aragon in its castle; There he received a messenger from King Henry IV, who ordered him to appear in Segovia, the prelate hanged the messenger. There the Ferdinand the Catholic sign waited for Isabel, who was in Segovia, to be crowned himself by coming from Turégano to the city to sign the famous Concordia on January 15, 1475. The intriguing bishop Arias Davila there would continue to reside, but his Numerous enemies managed to be tried by the Inquisition, declared Judaizing and forced to go to Rome in 1490. He was accursed and tried to erase everything relating to his person in the town, biting his shields to leave no trace of the character. 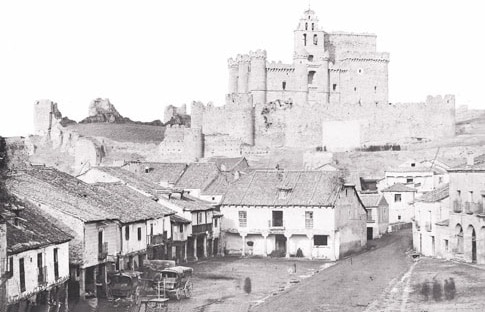 In 1521 the comuneros raised against Carlos I arrived to send to the governor Gonzalo de Copete (named by the bishop) up to 71 letters to convince to him that it was united to the rebellion; He also received a letter from Charles I himself, obeying him. These letters would remain hidden between two walls of the castle until the year 2002 when they were discovered.

King Felipe II used the castle as a prison for Secretary Antonio Perez after being held accountable for the death of Escobedo, being locked up in February 1585; There was an attempt of liberation on the part of his friends, who were deceived by the warden, remaining until March of 1586.

At the beginning of the 20th century it was visited by the ceramist Daniel Zuloaga who used it in his creations and by his nephew the painter Ignacio who painted his canvas Torerillos in Turégano. There also worked other painters of his circle, like the brothers Zubiaurre, Gutiérrez Solana and Duran Camps.

In 1962, commissioned by guitarist Andrés Segovia, the composer Federico Moreno Torroba composed a serranilla inspired by the castle of Turégano. The military musician Santiago Berzosa – born in the town in 1907 – composed the Hymn to Turégano, a pasodoble – march of great beauty that interprets the clock of the city council.

What to see in Turégano

It is a beautiful town, quiet, and with excellent food at a good price; Besides a strategic place from which to cross the province. There are not many places to see in Turégano: the visit to the castle, church and the promenade can take us three or four hours. On the other hand, excursion options are numerous. A little further north you can see vultures and stroll through the park of Hoces del Duratón river; In Sebúlcor it is possible to sail in canoe or to make other modalities of active tourism. Less than half an hour away are other medieval beauties where you can spend half a day, such as Pedraza and Sepúlveda. It is also a good option to visit nearby Segovia at a lower cost than staying in the capital.

The first thing to see when visiting Turégano is the Castle (about 1463) on the hill that dominates the town. The fortress is built on Celtiberian, Roman and Arab remains and has as peculiarity that in its patio of arms rises the Church of San Miguel (XII century and XIII). It was the seat of the Chancellery and the Audiencia, residing there the kings Juan I, Enrique II, Juan II, Álvaro de Luna and Fernando the Catholic. By 1463 its towers and its two walls were considerably reinforced by the bishop Arias Dávila; Being used like state prison until century XVIII. In 1703 was inaugurated the steeple of the castle to which the bells of the town moved. It was declared Historic Artistic Monument in 1931. The castle remains property of the Bishopric of Segovia, ceded to the Town Hall until 2024, is being restored in stages.

When descending to the town one goes to the Plaza Mayor, rectangular and denominated of the “Hundred poles”, by the number on which they support the arcades formed by columns of wood and stone on shoes and stone pillars. Formerly it was bigger, until the facade of the Episcopal Palace. According to the Chronicle of the Falconer of King Juan II of Castile there were held the most spectacular tournaments and festivals in the history of Castile; Until the beginning of the 20th century bullfights were celebrated there that were painted by artists Zuloaga and his circle of friends. The typical Castilian building of the Town Hall (19th century) has a clock programmed to interpret the anthem of Turégano.

In the Plaza Santiago is located the Church that gives its name; In its facade, inside a great hornacina there is an important carving of wood. The important head of the church is Romanesque, in this one is to be fixed in its windows and the columns whose capitals represent fantastic animals. The present neoclassical altarpiece of the XVIIIth century includes carvings of San Pedro, San Pablo and Santiago. The apse is formed as a stone altarpiece in three levels on capitals with peacocks, bird pairs and altorrelieves of St. James the Apostle. In the same square is the Palace or Casa Miñano with three floors and loft; Is built with stone, adobe, brick and wood. What were their stables were adapted to private homes and the Tureganense Center, recreational center of the villagers.

The Episcopal Palace was built by the bishop Don Manuel Murillo around 1753; Its main façade faces south of the square. After the Disentailment it happened to private property, being progressively incorporated to him other constructions; The founding bishop’s shield is still visible. 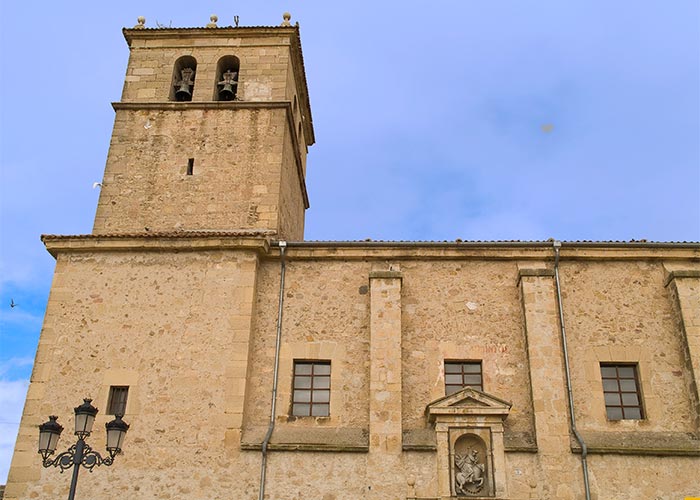 Leaving the square on Bishop Miranda Street is the building – completely renovated in the twentieth century – of what was once the 14th century Synagogue.

Three kilometers from the village, inside a pine grove, there is a large house of the twentieth century where the Forest Museum, which explains the ecosystem of the pine forest (animals and plants) as well as the exploitation of this environment. In the surroundings of the town there are several localities with Romanesque temples that respond to the style denominated like “Romanesque of the river Pirón” to be in the environs of the same one. These buildings are distinguished by the rich floral and vegetable decorations that show in their covers and in the capitals of the columns; Also the real and fantastic animals of extraordinary quality that appear in the capitals. His most outstanding examples may be those of Sotosalbos and Caballar. At 17 kilometers, the Romanesque church of Sotosalbos stands out for its beautiful porticoed gallery, the arches of the door are singled out for continuing to the ground and its decoration of sawtooth. The capitals, canecillos and metopas that can be enjoyed in the gallery are characteristic of the masons who worked in this area and deserve to be observed with time; In the interior it deserves to stop before the fresco paintings of the apse and the great baptismal font.

At 6 kilometers from Turégano, in Caballar, the great Romanesque Church of La Asunción (13th century) has a nave with a semicircular head and an important vault of half-barrel; If it is accessed during mass hours inside there is a baroque altarpiece and an important segovian silver reliquary that holds the skulls of the brothers of San Frutos, the eighth-century hermit who is the patron saint of Segovia.