The Sacred Church-Cathedral of Nuestra Señora de la Asunción y de San Frutos de Segovia, known as the Lady of the Cathedrals, began to be built in the 16th century. It imposingly presides over the main square of the city, as a body of impressive volume that is, however, perfectly integrated among all the other buildings. Standing out but fitting between the streets of the Jewish quarter and those leading to the fortress, near a wall that is still preserved and the center of the social life of the Segovians. This cathedral is the result of a previous one that was destroyed and holds secrets, details and unique elements that are worth knowing.

The photogenic Cathedral of Segovia 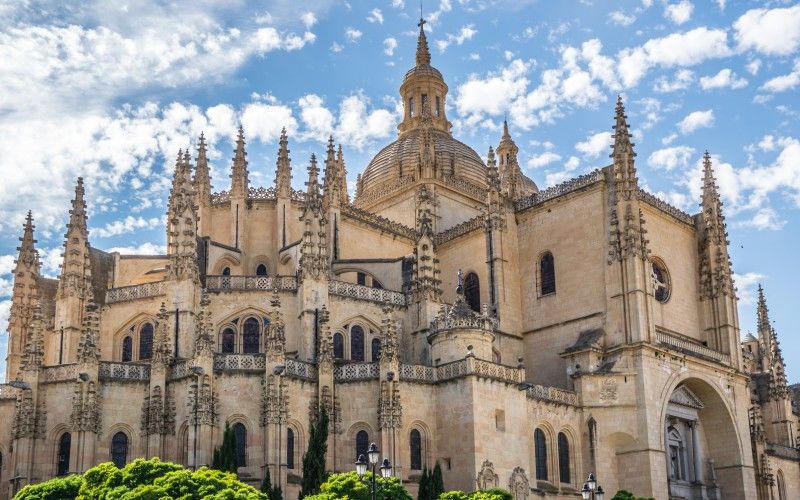 The cathedral seen from the Plaza Mayor. | Shutterstock

Santa María was the original cathedral of the city of Segovia, built in the 12th century in the dominant Romanesque style of the time. It was located in the vicinity of the Alcazar, next to the archbishop’s palace and a hospital. The temple, however, was destroyed during the revolt of the comuneros, a rebellion that took place between 1520 and 1522. Shortly thereafter, in 1525, King Charles I of Spain and V of the Holy Roman Empire decreed its destruction and decided to build a new one.

Thus was born the Church-Cathedral of Nuestra Señora de la Asunción y de San Frutos, which began to be built in 1525. It would not be consecrated, however, until 1768, a curiosity that will be discussed later. It was built following the guidelines of the Castilian late Gothic style, thus resembling the new cathedral of Salamanca. One of the best examples of this style of Spanish architecture and one of the last in Europe.

It was Emilio Castelar, president of the First Republic, who referred to this monument as the lady of the cathedrals of the Spanish geography. This is the title it has held since the 19th century, in capital letters: the Lady of the Cathedrals.

A construction out of the ordinary 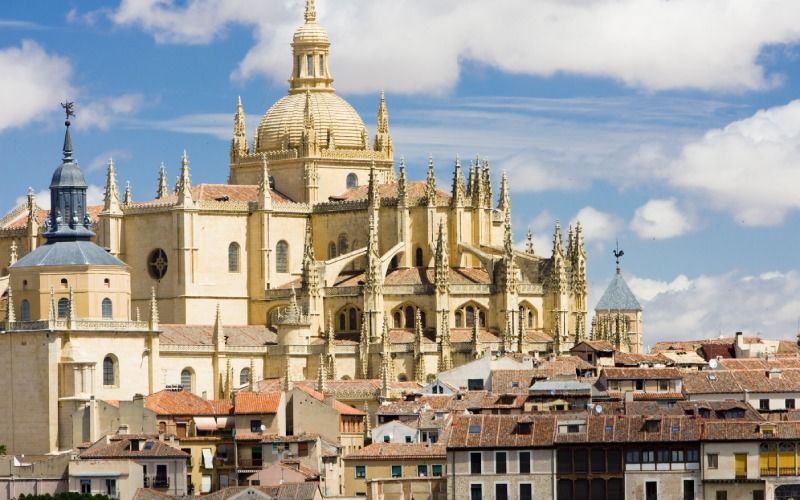 This is how the Lady of the Cathedrals stands out among the rooftops of Segovia. | Shutterstock

Charles I of Spain and V of the Holy Roman Empire himself was in charge of promoting the new cathedral, taking the decision to take it away from the Alcazar. One of the highest points of the city, once known as the Plaza Grande, was chosen for this purpose. The works were installed on land that belonged to the Jewish quarter, over the old convent of Santa Clara, which was demolished. This area of the city underwent a tremendous transformation as a result of the project. As such a large space was needed for its construction, a hundred houses had to be demolished to go ahead.

The truth is that it was a project that developed in an unusual way from the beginning. Among other things, because this type of temples usually begin their construction at the head of the church, in order to be able to officiate mass as soon as possible. The one in Segovia, on the other hand, began to be built at the foot. It was fortunate to have the chapel of the aforementioned convent, located at the chancel, for this purpose.

Several elements of the old cathedral were rescued to reduce costs, many of them financed by the Segovians themselves. The cloister of the cathedral of Santa María, for example, was transported stone by stone. Others took several attempts before they finally settled. This is the case of the old wooden spire which, at 25 meters high, was struck by lightning in a great storm at the beginning of the 17th century. Before perishing in the fire, it was the tallest in Spain.

It is also worth mentioning the 243 years that elapsed since the first stone of the temple was laid until it was finally consecrated on July 16, 1768. The dome of the transept, for which a suitable project had not been found, was partly to blame. During these centuries there had been all kinds of collapses throughout Spain, a fact that Segovia did not want to repeat. It took several master builders, many consultants and more than fifty years of delays and stoppages before this dome was finally completed. It was completed in 1685.

Three secrets of great value of the Cathedral of Segovia 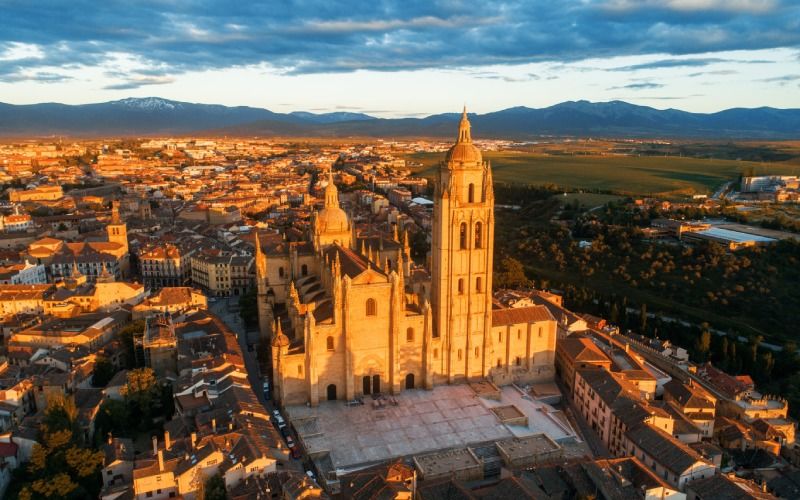 A postcard from the heights, at sunrise, in which the cathedral tower can be observed. | Shutterstock

First of all, a historical fact. In the Cathedral Archive is preserved the famous and appreciated Sinodal de Aguilafuente, the first printed incunabula book in the history of Spain. It was promoted by Juan Arias Dávila, bishop of Segovia, who developed what is considered the first printing press in the country. This manuscript dates from 1472 and contains the minutes of the diocesan synod that took place in Aguilafuente, a town in Segovia, in June of that year.

Another of the remarkable details has to do with the tower, which can be observed in an excellent way from the space known as the Puerta del Perdón. It is so named, by the way, for the pardon granted by the bishop to those who destroyed the old cathedral. This tower measures 88 meters and in it lived, in the past, the bell ringer. Since climbing the steps of these almost ninety meters was not an appetizing practice, a method was devised to be able to communicate with him without the need to go up. A hole was built in the granite base of this tower. When it was hit, due to the echo effect, the noise reached the top of the construction. End of the problem.

Finally, a very small secret. Inside the temple, in a place that will not be revealed to invite active search, is the smallest stone of the whole construction. They say that those who find it will have the opportunity to walk around it three times. If you get it and make a wish, it will be granted.

art, Castile and León, cathedrals, history, Segovia
It may interest you...