Of a palatial nature, the Roman villa of Santa Lucia is one of the largest preserved sites of its time in the province of Segovia. Located in the municipality of Aguilafuente, it is a perfect example of this type of construction at the time of the end of the Roman Empire. The last campaign carried out in the site has revealed the walls of a facade of about 45 meters long, plundered during the following centuries. The work has focused on the eastern part of the complex and has allowed the perimeter of the main building to be defined.

Thanks to this project, the full size of the central building of the town from the 4th century A.D. is known. In total it covered 2,200 square metres. Only the central courtyard, which once had columns, reached 450 square meters in area. The entire property covered over ten hectares, including productive areas and service towns. These data confirm that, during the end of the Roman era, Santa Lucia was an important rural centre in what is now Segovia. 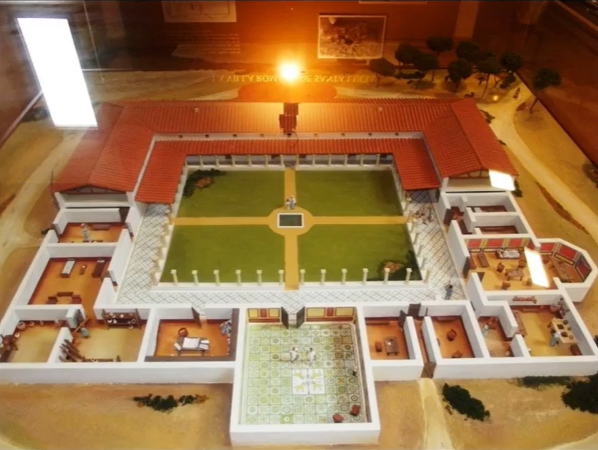 Recreation of the Roman villa

The aristocratic character of the enclave was clear from almost the beginning of the work on the site in the 1960s. At that time, mosaics and rich paving were found. About twenty professionals from the Complutense University of Madrid were responsible for carrying out the excavations, during the month of July. Since 2018, work has continued on the site, in a collaboration that also includes the town council of Aguilafuente and the Junta de Castilla y León.

In addition to the façade, the researchers found remains from both earlier and later periods. Among the former are the remains of walls from an enclave from the 2nd and 3rd centuries AD that preceded the late Roman town. Of the latter, the more than ten Visigothic tombs found are particularly noteworthy. After the aristocratic complex fell into ruin, the Gothic people took advantage of the place to turn it into a necropolis. We also follow the trail to the church that gives its name to the place, built in the Middle Ages and which housed a small rural nucleus in the 13th century. Before being dedicated to Santa Lucía, the church was dedicated to San Mamés.

archaeological sites, Castile and León, Roman sites, Segovia
It may interest you...

It is said that it is possible to recognize a…

5 fairytale castles in Spain
Some Spanish castles seem to be taken from the stories we read as children. There Más información