Throughout the length and breadth of the Spanish geography, there are a large number of holy caves. The peculiarities that some of them hide, not only have turned them into a place of pilgrimage for the most believers, but also into important points of tourist interest. The stories, miracles, apparitions, carvings and relics that await behind their stones make these caves sites worth visiting.

Holy Caves of the Sacromonte Abbey

The Santas Cuevas de la Abadía del Sacromonte in Granada were born as a result of the discovery of the relics of the Christian martyrs San Cecilio and his followers, San Hisicio and San Patricio. Originally, these were lime kilns used by the Romans. At the end of the 16th century, between 1595 and 1597, the first excavations were carried out to later reinforce and evaluate those caves where there was evidence that they had been a place of martyrdom. The tombstone found in this location narrates the martyrdom of Saint Cecilio, bishop of Ilíberis, disciple of Santiago Apostle. 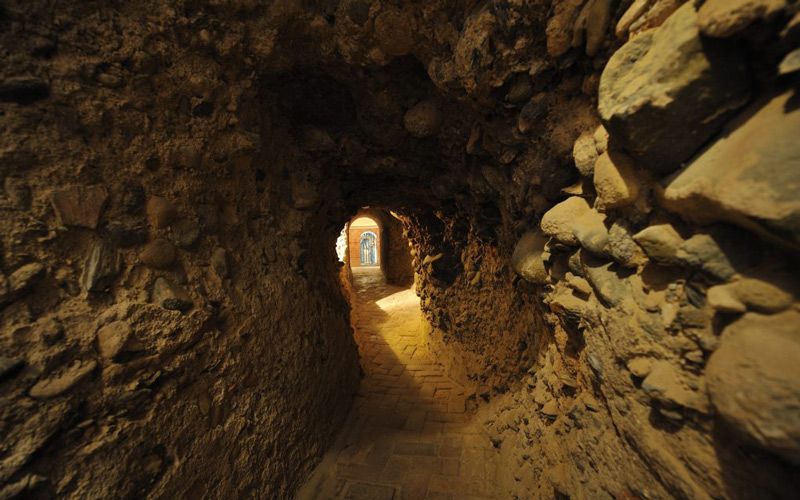 Sacromonte are one of the Holy Caves of Spain. | Ceded by abadiasacromonte.org

At the entrance there is an altar to whose sides are venerated two wax images brought from Rome with the relics of the martyrs San Victor and San Leoncio. Going down the stairs, one arrives to the different chapels that compose the caves. Among them are the one of the Dolorosa, the one of Piedra or another smaller one protected by a grille. The chapel of Santiago deserves special mention, where, according to legend, the apostle gave the first mass in Spain.

Sanctuary of the Holy Cave

The Sanctuary of the Holy Cave of Altura, in Castellón, is part of one of the most emblematic traditional, cultural, historical and religious symbols of the Archpriesthood of Segorbe. This grotto houses a Marian invocation of the Virgin of the Holy Cave, patron saint of the Diocese of Segorbe-Castellón. Numerous miracles are attributed to her, among which is the creation of the spring of the Berro de la Villa de Altura. 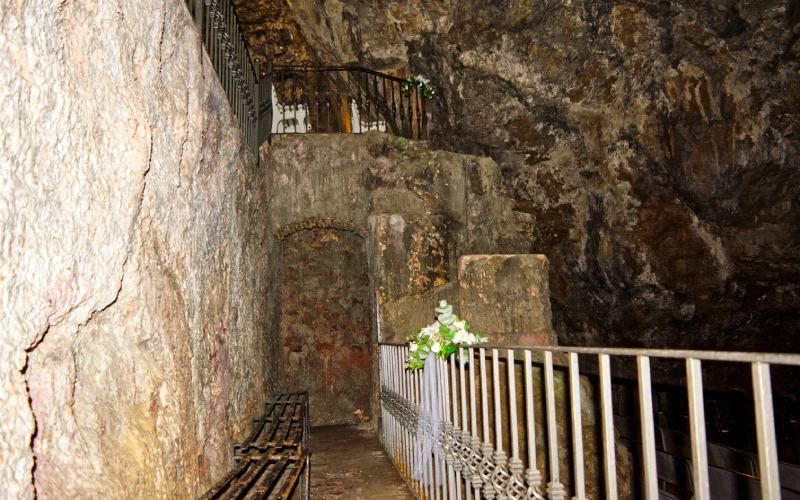 Previously, this cavern was known by the name of latonero cave. It is about 20 meters deep and was used by shepherds as a shelter. In the 12th century, a chapel of the Virgin was built in its depths. This was built with thick ashlar and masonry walls. In its interior an altarpiece is conserved, formed by pedestals and salomonic columns of jasper.

The carving of the Virgin of the Holy Cave, a plaster bas-relief, has its own legend. It is said that one of the shepherds who took refuge in the chasm must have left an image of the Virgin in it, attributed to Fray Bonifacio Ferrer. A century later, she appeared to another shepherd who spent the night in the cave and showed him where the work of art was.

The Holy Cave of Montserrat or “La Santa Cova” is an important place of religious pilgrimage, located in the Monastery of Montserrat in Barcelona. This cave is the place where the image of the Virgin was found in 880, the origin of her cult and consecration as patron saint of Catalonia. It is accessed through the way of la Santa Cueva, which is carved into the mountain and was built between 1691 and 1704. 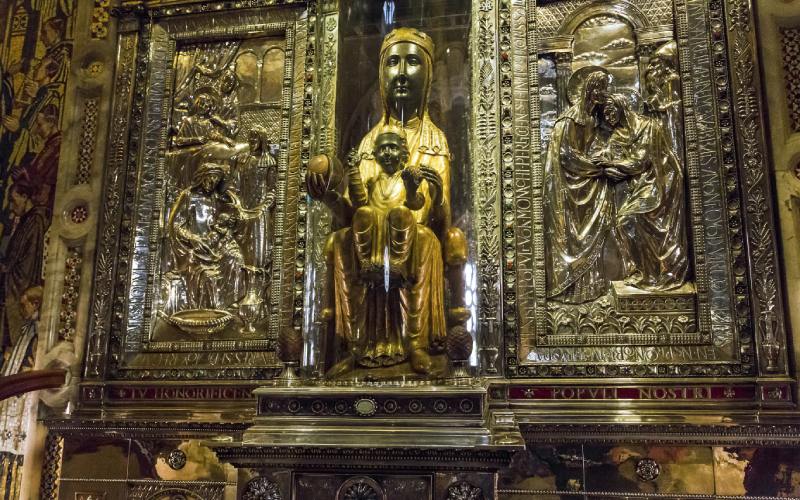 The Moreneta or Virgin of Montserrat is the protagonist of the sanctuary. | Shutterstock

The story goes that one Saturday in the year 880, near twilight time, some shepherds saw the so-called “great light” fall from the sky. A week after this event, the young shepherds returned to the mountain with their parents and the vision arose a second time. This continued to happen for the next four Sabbaths. So the rumor spread and the bishop of Manresa organized a trip to visit the great mountain on the sixth day of the week. The religious and the people who were with him were able to see the image of the Virgin Mary in a cave. They considered this to be an act of divine intervention and interpreted that the image had to be venerated in Montserrat and could not be moved.

The chapel was built between 1696 and 1705, thanks to the patronage of the Marquise de Tamarit. The vertical location of the chapel on the slope of the mountain gives it the feeling of being suspended. The chapel has a Latin cross plan, and in its altar there is a reproduction of the image of the Moreneta, since the authentic one is in the Basilica of the monastery.

The Holy Cave of Covadonga is a grotto on Mount Auseva, which gives its name to the parish of the same name, located in the municipality of Cangas de Onís. Legend has it that while chasing an evildoer, Don Pelayo came across a hermit who worshipped the Virgin Mary in this cave. The lonely man asked the Gothic hero to forgive the criminal he had taken in the cave, as he was under the protection of the Most High. However, historians believe that the most feasible option is that the warlord and the Christian fighters left the image of the Virgin there while they took refuge from the Muslims. 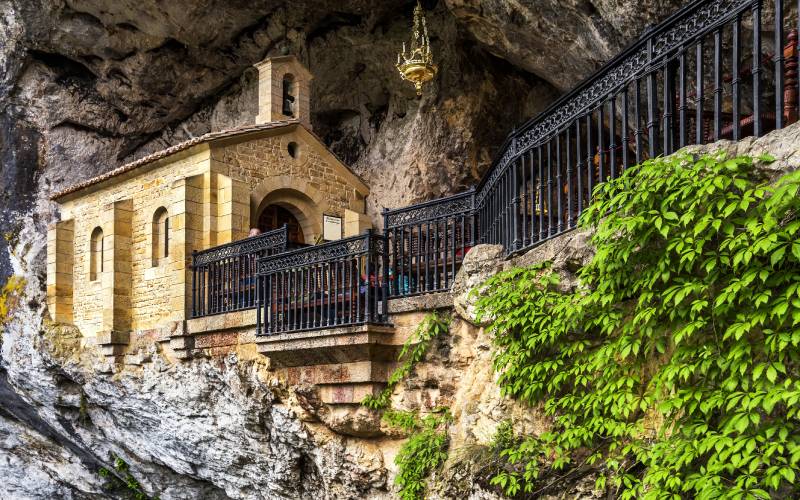 Chapel located in the Holy Cave of Covadonga. | Shutterstock

The first construction was carried out in the time of Alfonso I the Catholic who, to commemorate the victory of Don Pelayo in Covadonga ordered to raise a chapel dedicated to the Virgin Mary. In addition, two others were built for St. John the Baptist and St. Andrew. The cave was covered with wood but in the 18th century, a fire destroyed the original carving of the Virgin. Therefore, the current carving is from the 16th century and was donated to the sanctuary by the Cathedral of Oviedo in 1778.

The Holy Cave of Liébana was erected shortly before the year 900 on the slope of the Viorna mountain, in the Liébana region of Cantabria. It forms part of the hermitages surrounding the monastery of Santo Toribio de Liébana. According to tradition, the Benedictine monk Toribio de Palencia would have built it in the 6th century as a place of retreat. A deep-rooted legend in the area says that the saint, not knowing where to build his home, climbed to the top of the Viorna and threw his staff into the abyss saying: “Where my staff falls, there will be my abode”. 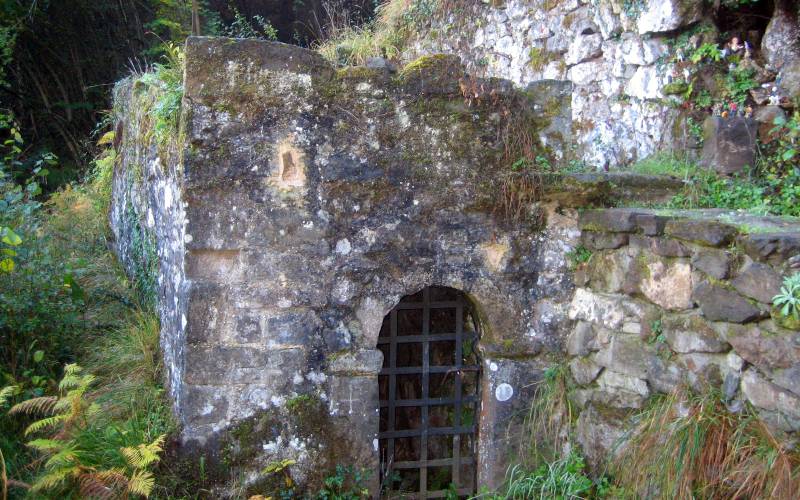 The Holy Cave of Toribio de Liébana is located on the hillside. | Wikimedia

This cave has two floors. The lower one, excavated in the rock, would be the cell and the upper one a small chapel. The entrance to the first one is through a rough door with a round arch, while the upper floor is accessed by a ramp. The latter was probably built in 1601 by the monk Prudencio de Sandoval.

The Cueva del Santo Hermano Pedro is located next to the airport of Tenerife Sur, near El Médano. This cave is dedicated to the first Canarian saint, San Pedro de San José Betancur. Although it belongs to the aerodrome, it has an agreement with the island’s Bishopric and allows its use by the faithful. Since the late nineties, this cavity and its surroundings have been classified as an Asset of Cultural Interest (BIC) in the category of Historic Site. 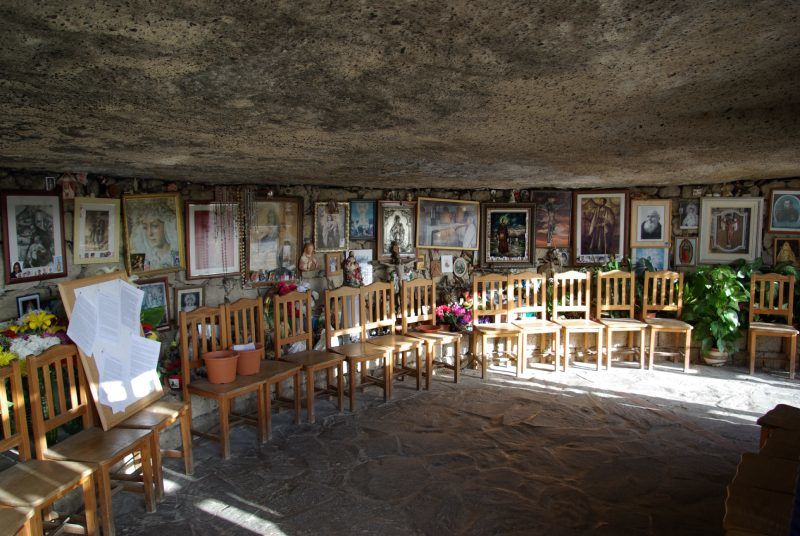 The Holy Cave of Santo Hermano Pedro in Tenerife. | Wikimedia

The cave is considered one of the most important pilgrimage points of the Canary Islands. In this cave is where the saint stopped to rest with his flock in winter to regain strength and walk the road to his small village in the highlands of Vilaflor. It was also used as a place of prayer and even as a hiding place to shelter from the pirate attacks that the island suffered.

At present, its interior holds a wooden image of Brother Pedro and a section that is completely surrounded by votive offerings from the faithful. It also has a relic of the Saint, specifically the part of a rib. Outside in the open air there is an altar carved in stone where masses are held.

Cave of the Dolls

The Cueva de los Muñecos, in Santa Elena, Jaén, is located in the middle of the Despeñaperros Natural Park. Centuries ago, the shepherds and cattle ranchers of the area used it as a source of bronze votive offerings of Iberian origin that they melted down to make tools, hence its name.

The Collado de los Jardines Sanctuary is located in this cave, from which some 2,500 bronze and clay votive offerings have been recovered. In ancient times, the Iberian settlers threw these dolls through a crack in the cave to request the favors of Mother Earth. In the 20th century, antique dealers and antiquities dealers began to buy them and this unleashed a plague of rummage hunters. Currently, most of these pieces are in the National Archaeological Museum of Madrid.

The cave hermitage of San Úrbez is located on the edge of the national park of Ordesa and Monte Perdido, near the village of Fanlo, which is also one of the most attractive in Aragon. The locals believe that the cave at the end of the chapel is the place where the shepherd Úrbez slept, while developing the hermit work that would lead him to sainthood. Either stolen or given by the inhabitants of Alcalá de Henares, the saint took the relics of Justo y Pastor in order to protect them. 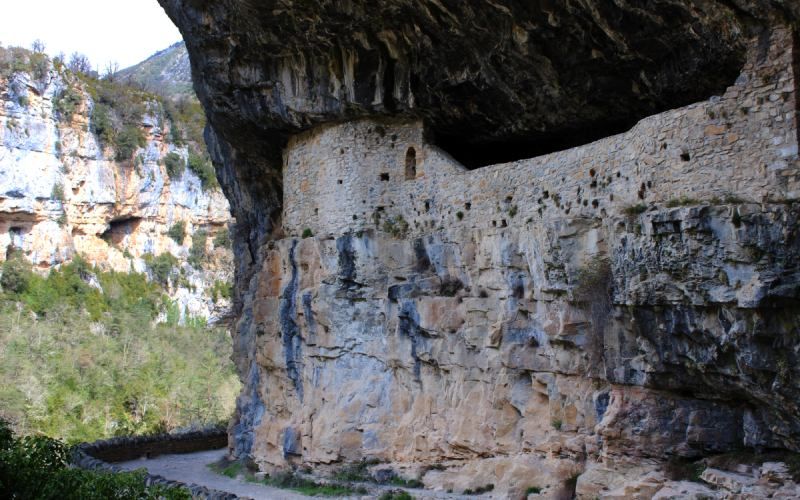 The hermitage of San Úbez is inside the mountain and has one of the holy caves of Spain. | Shutterstock

The anchorite spirit of the saint is transferred to perfection in this temple. The hermitage is entirely in a rock shelter that can only be accessed thanks to a staircase and a door with a rough semicircular arch. It seems to be that it began to be built around the XI or XII century, although the popular tradition frames the death of San Úrbez in the year 802. The greater part of the construction is the frontal wall, since the rest is molded to the rock. The first segment has no roof, which provides great luminosity, and a kind of elongated nave groups the seats for the parishioners.

The Penitential Cave of Santo Domingo de Guzmán is located in Segovia, outside the city and close to the Eresma River. For a long time, this cave was a place of pilgrimage for Christians. Despite the hard blow of the disentailment of the 19th century, the Dominicans managed to continue with the ownership and care of it.

Saint Dominic de Guzmán stayed in this cave until 1218, devoted to preaching during the day and to prayer and penance at night. His stay in Segovia coincided with a period of drought that discouraged the farmers. Faced with this situation, he prayed to God imploring rain. Something that, when it happened quickly, made the people of Segovia consider him their saint and protector. In gratitude to him, the first convent of the Order of Friars Preachers was built on this site.

The cave has an interior chapel with a rectangular floor plan, covered by a half-barrel vault of gilded and polychrome wood. The altar, in the same style, has a niche representing a grotto in which Santo Domingo de Guzmán appears in front of the crucified Christ. Next to this, in the wall of the right, another niche is opened that also welcomes the figure of the saint dressed with the habit of Dominican friar.

Castile and León, Caves, Segovia
It may interest you...